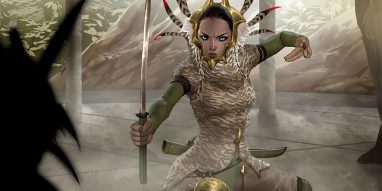 Now a month past the release of the Awakening campaign, we’ve been monitoring the impact on our constructed formats and where things are settling after the Summer Championships. The Expedition Summer Championship revealed a format of much possibility with many factions and play styles doing well.  In Throne, there’s a lot to like about how interactive and skill-testing the games are; at the same time, there’s been a bit of top-heavy trend with Stonescar and Justice-heavy decks solidifying themselves as the alphas of the format. To help improve diversity, we are announcing a set of balance changes today that will go live tomorrow, 10/6.

The Throne Championship confirmed a trend from the ranked queues that Stonescar Aggro’s threats were proving a bit too difficult for players to slow down. By lowering the health of two of their premier early plays, we aim to make it a bit easier to answer the first threat and give players a better chance at keeping pace or catching up.

The breakout hit of the Awakening Campaign in Throne, Kira has propelled multiple Justice-heavy decks to the top of the metagame. While the tug-of-war over protecting your Kira or removing the enemy’s can be a fun and skill-testing battle, it currently defines too much of the format’s play. At her heart, Kira’s just a bit too strong to protect out of the gate. Her widespread adoption confirms this. She sees such a high level of play among decks not really invested in her as a fun build-around. By lowering her stats, we aim to get her closer to the original intent, an early unit with tons of potential but one that requires you to really do the work to make her exceptional.

Since Kira Ascending is only obtainable through the Awakening Campaign, players who purchased that campaign will receive 1,250 gold (2,500 for those who own the premium campaign).

Another powerful way to take advantage of Justice influence, a well-armored Backbreaker can take over games, eating multiple units. While it’s great for removal to be so interactive and open to forms of counterplay like combat tricks, attacking, and attachment destruction, in Expedition, Backbreaker’s been shaping such a high number of games on if a player can handle it. And in light of how strong it’s been to have a lot of Justice influence lately, it’s a good time to pull back there and give breathing room for some other deckbuilding quests to compete.

With Shift being such an underused aspect of Cen Wastes Smuggler, we’ve always had an eye for a way to improve. Decay emerging in Argent Depths we can now show off a new skill the Fire-Shadow smuggler picked up in the Cen Wastes.  Along with the skill, expect to see an updated version of her art, highlighting her new corrosive powers.

With Praxis and Pledge decks no longer a dominant presence, Darya’s ready for a comeback tour as we’re restoring her to her former glory.

(Notes: While the changes to Darya and Cen Wastes Smuggler are intended to boost their appeal, since they are not strict upgrades, we will be offering sellbacks to interested players.)

For buffs this go-around, we first identified some changes to help expand the range of what’s viable at the top of Throne. Among them, some answers to a few popular requests from the community along with boosts to a few fun ones that never quite saw their day in the sun.

We’ll be continuing to monitor developments as these changes rollout and will check back in November before the 2020 Eternal World Championships with our future balance plans.

In addition to to the above balance changes, the following fixes and changes are included in this update:

Fixed an issue that when an imbue unit died it sometimes wouldn’t count towards “When a unit dies” abilities.

Fixed an issue where cards that were supposed to be discarded at end of turn from an ability were prevented by Genetrix Irel, Wayward’s ability, they would retain this until they had been successfully discarded from the player’s hand.