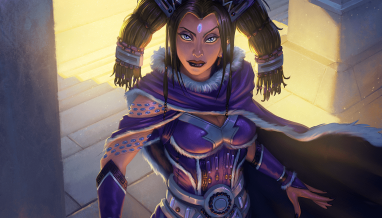 With the results of ECQ: The Time of Ancestors in-hand and several weeks of Flame of Xulta play data to analyze, we’ve got a pretty good sense of how the metagame is shaping up, and a couple of spots where we need to take action.

Here’s a preview of Eternal balance changes that will be going live in-game tomorrow:

In looking to improve the balance of strategies in Throne, we had two primary targets in mind: Fire/Time decks, with or without Justice as a third faction. When bringing an oppressive deck more into line with the rest of the tier 1 Throne strategies, we generally look to preserve the primary strengths and definition of the decks, while expanding counterplay and vulnerability to well-prepared opponents.

Tocas, Waystone Harvester  – After careful consideration, we ultimately settled on Tocas as a primary place to take points out of Praxis for two reasons. We believe changing it to be particularly effective, as it was played at such a higher rate than other options for acceleration. Additionally, the splash damage from Tocas’s ability being so omnipresent was suppressing some of the cards and strategies we’d like to see show up more. We discussed this idea of removing this ability; however, whenever possible, we strive to preserve the core functionality of cards and instead balance them with a more appropriate rate.

Xulta Arcanum – While we like the existence of the decks made possible by Xulta Arcanum, we wanted to preserve the card as a fun and powerful endgame plan, taking just a small bite out of its durability. It is already a difficult site to attack, but with this increased vulnerability, it’s hopefully at least a little more assailable.

Edict of Shavka – Moving Edict of Shavka to 2-cost is aimed as additional rebalancing of both of the aforementioned strategies; but it’s also just a bit of course correction for Fire, which had started to climb upwards a little more than we’d like. While Edict of Shavka provides some much needed relief against certain difficult threats, it was so easy and ubiquitous that it was pushing lots of cards out of the metagame.

A brand new format like Expedition can go through a lot of phases, while players figure out how it works and what strategies are viable. While several strategies took turns in the top spot initially, players were able to find answers to each and keep the format evolving. Xenan Cultists, however, has proven itself too resilient, maintaining a dominant presence after its strong performance at this month’s ECQ. In looking to better tune the format, our goal was to preserve the elements of the deck that give it its own personality, while increasing potential vulnerabilities and counterplay.

Slumbering Stone – While there’s a lot of cool possibilities with Slumbering Stone, it contributed more than any other card to bogging the game down and making attacking the Cultist decks too hard. We discussed other possible changes, but settled on changing the Entomb to draw in order to preserve some key combos with the card and open up a few new ones. It increases Xenan’s vulnerability to fliers, and reduces implied onboard complexity of pairing the card with sacrifice effects. One of the most important areas we wanted to limit was chaining of Vara reanimation triggers, which are still possible, but slowed down a little to prevent a consistent cascade of units.

Worthy Cause – Worthy Cause has proven itself a little too efficient at taking out nearly any threat. Our hope is that this change preserves its versatility and combo-potential, while pulling back on the incredible tempo it can afford.

Incarnus, Makkar’s Listener – While Slumbering Stone and Worthy Cause were our primary targets, on account of their ultra low cost and slightly burdensome tracking and complexity, the power level of Cultists was such that we wanted to do a little more to balance things out. While the play of Incarnus has proven itself quite fun, it has been showing up at a high enough rate and in enough different places that we felt this would better align it with the other Listeners, while also increasing the range of counterplay available to what can be a dangerous, unblockable threat.

Two Buffs and a Nerf

Varret, Hero-in-Training – While we’ve been happy to see Varret achieve such widespread adoption in Expedition, we’ve been tracking the balance between his possible Mastery paths and determined that a little rebalancing was necessary to ensure more variety among the options selected. Many of the strongest enablers give extra incentive to choose the “Wise” path, picking up Aegis to protect your investment. In addition to pulling back the Aegis option’s strength, we’re adding an extra point of strength to the “Stealthy” Lifesteal option and an extra point of health to the “Mighty” Overwhelm option.

Between Fire, Time, and Justice in Throne and Time and Shadow in Expedition, we wanted to find a couple spots to show some love to interesting Primal cards. Inspired Prank and Elvish Swindler are both fun options that reward synergy that hopefully inspire some new explorations in deckbuilding.

As always, we’ll be continuing to track results across Throne, Expedition, Draft, and elsewhere to keep Eternal healthy, exciting, and fun. So go shake up the metagame with a sweet new deck, and show us what comes next!