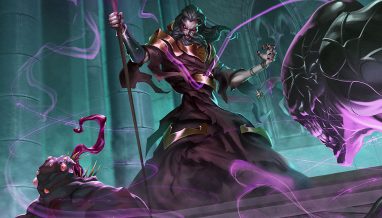 With the conclusion of Eternal® Celebration came the Last Chance Qualifier for the 2020 Eternal World Championship, and while we saw a very diverse Throne field (congrats again to Doc28 for taking it down!), we feel it’s a great time for the next chapter of the format.

To open up space for the Throne format to continue to evolve, we’re making four straight-forward cost changes to the following cards:

An unchecked Severin can lead to some wild games, with huge lifesteal attacks and then a deck teeming with Destiny units. It’s sweet seeing Severin light up the board with these epic turns, but it can get old when the experience is too frequent. By upping its cost, we’re pulling back on just how often players will get griefed.

When decks focus hard on playing lots of cheap units and exploiting fast tribal synergies, it’s important for other decks to have a satisfying variety of tools to select from to catch up. But when a card like Blightmoth proves so strong and ubiquitous it threatens not just to oppress x/1s from being viable but also the diversity of removal that appears. To that end, we’re bringing it more in line with other potential options by increasing its cost to three.

Note: As with previous campaign changes, we are giving a one-time grant of 1,250 gold to users who purchased the Whispers of the Throne campaign. Users who upgraded the card will receive an additional 1,250 gold. As always, players will keep all their copies of Blightmoth.

Turn to Seed has been one of the most-played Primal cards since its printing, and we’d like to pull back on that ubiquity a little bit. Turn to Seed is a valuable tool against certain “all-in” strategies; however, when it’s the most common form of removal instead of a tactical weapon, it can start to threaten the place these exotic strategies have in the game. We’re hopeful that this change will preserve its strong anti-combo abilities, while also substantially decreasing the speed, ease, and frequency it shows up in more typical games.

Note: As with previous campaign changes, we are giving a one-time grant of 1,250 gold to users who purchased the Shadow of the Spire campaign. Users who upgraded the card will receive an additional 1,250 gold. As always, players will keep all their copies of Turn to Seed.

A potentially epic comeback spell and fairly different form of interaction, at four-cost Battle at the Gates has yet to really break into the competitive metagame. We’re redrawing the battle lines to give this one another shot at the big time.

We’ll continue to monitor both Throne and Expedition as they get a big shakeup with Bastion Rising, and we hope that you’re as excited as we are for the 2020 Eternal World Championship later this month!