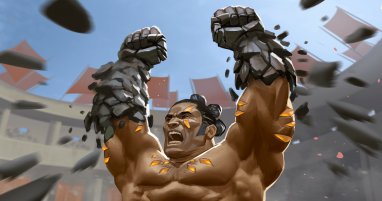 The past few weeks have been an exciting time in Eternal, with the releases of both Echoes of Eternity and Whispers of the Throne creating a brand new meta in both Throne and Expedition. Now, with a couple of months of play results, and a handful of significant tournament events, we’re taking the opportunity to realign 24 cards to make sure that everything remains healthy and fun.

Whispers of Throne introduced a dominating presence for Fire Aggro and Stranger decks in both Throne and Expedition. With Echoes of Eternity, we were eager to see the impact it would have on both formats. After a few weeks, we’ve determined some changes are needed to ensure both formats feel fresh and exciting to explore.

These two just got off with a slap on the wrist before, but can’t seem to stay out of trouble. Both Grodov’s Stranger and Makkar’s Stranger initially took a hit after losing +1/+1 and +1 strength respectively; but even in their smaller forms, they have still been very prohibitive for anything but aggro to try to reliably compete with.

Grodov’s Stranger is a huge threat that produces value when played, and even more whenever it’s able to attack. This change preserves the card’s flexibility and late-game potential, while reducing how quickly it can run away with the game from a cascading string of card advantage.

Makkar’s Stranger hasn’t proven quite as warping as Grodov’s Stranger, but it’s definitely been pretty high up and contributed more than its fair share to Stranger decks running rampant. We’d like there to be a range of how many Strangers various decks play (among those that even have any), and Makkar’s Stranger’s attack trigger, in particular, has been punishing the use of non-Strangers more than we’d like. By reducing Makkar’s Stranger’s health, we aim to increase the range of cards that can block or shoot him down.

While these changes helped revitalize aggressive strategies during times where they were low, the pendulum has swung back in the other direction for some time now. Both Stonescar and Yetis in Throne have proven to be so high on efficiency and aggression that after careful consideration we’re reverting these cards to their original size and cost. With a smaller Borderlands Lookout, these shift 1-drops were a bit too ahead of the curve compared to other options; and Inspired Prank being a little slower again gives a little more time for players to defend themselves against what is already a very low opportunity cost threat.

As the clear dominant pairing in Expedition, Rakano (whether it was Oni, Relic Weapon, or Stranger-focused) has been warping the format around its threats. Rather than cut down any one card or build, we opted to tweak a number of the strongest cards, in order to help preserve the diversity of ways these decks can be built.

Bisma, Revered Elder was buffed well before the Exalted mechanic and before the rise of Argenport Unseen decks; however, at this point, they’ve been a consistent overperformer in Expedition for a while now, especially against less experienced players. Between Aegis, Exalted, and Entomb, interacting with their synergies can be frustratingly difficult, and Bisma’s Entomb has been in a strange state, where it’s a lot like Exalted, but it’s not quite the same thing (which got even stranger when it got Exalted, itself). Rather than revert it to its original 4-cost, we have removed the Entomb ability, which we hope cleans things up.

Master’s Blade is just an outrageously strong card, and with so many Strangers getting nerfed we no longer felt giving its rate a pass was warranted. As is so frequently the case, our hope is that this change preserves the card’s core functionality, and just takes a little out of the extra stats (which then makes the card more about the parts special to it, like the dynamic stats).

We knew adjustments may be in order once the Market rules were cleaned up, and now that we’ve had time to see the fallout, we’ve determined that the original Fire, Justice, Primal, and Shadow Merchants would each be well-served with an extra point of health to help make up for the change to their Market abilities. We also wanted to increase the incentive for players to play some amount of units, even in their control decks, as it tends to lead to more satisfying games for both players when that’s the norm (even if there are decks that want to be exceptions).

We also considered the possibility of adding a point of health to Auralian Merchant; but it has continued to be the most widely played Merchant by a good margin and quite successful. We have also discussed the possibility of restoring Jennev Merchant’s original stats, but with Rime Conclave Smuggler at 3/2 wanted to give Primal players a wider range of options.

Transpose has lagged behind other market options and we’re upping its damage to give it a bit more oomph. We also wanted to further increase the strength of 4-cost options available to players, while also helping combat multiple aggressive threats.

With Fire Aggro setting a new high-water mark for recent times, particularly those with powerful and aggressive 3-drops, we determined it was the right time to restore Defiance to its previous glory, offering an effective potential tool for slowing aggressive decks down, helping open up space for strategies that go a bit bigger.

While we’ve seen a lot of great results from Dragons, Sacrifice, Battle Skills, and Armory, Tradition decks haven’t quite got the support they’ve needed. We’re hoping that these improvements might give them enough extra juice to warrant another look.

Both of these build-around heroes promise an epic dream and by reducing each of their costs by 1, we’re hoping there’s more opportunity to see what they can do.

This past weekend’s QCP saw some exciting advances in the Throne metagame, but a new deck doing well doesn’t necessarily mean nerfs targeting it are needed. We’ll continue to monitor every major archetype; but so far, nothing else has been problematic. Draft has looked like it’s been in a good place since the most recent additions to the draft packs, so no changes targeting it needed, either.

We’re excited about this patch and the implications it has for both Throne and Expedition. Our next balance patch is scheduled for the middle of May, and whether or not we make any chances, we’ll be checking in. See you then!