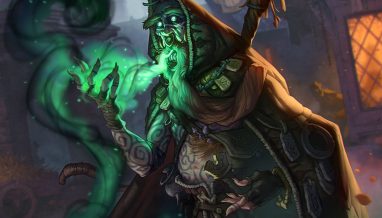 The Pre-Order Bundle is now available, and exploration of Argent Depths has begun! Right now, you can play and collect with 60+ cards in the Draft Preview including cards with Surge, Plunder, and Decay. There’s still one more mechanic we have yet to see: prepare to enrich yourself with Imbue! 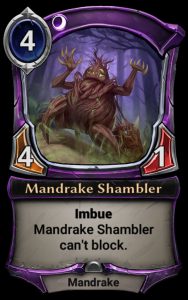 Imbue: When you play a unit with Imbue, you may stun one of your other units and keep it stunned. As long as it’s stunned, this unit gets its strength and health.

Imbue is always optional and you will only get the choice at the time you play the Imbue unit. If we do choose to Imbue, the unit will remain stunned as long as both remain in play. 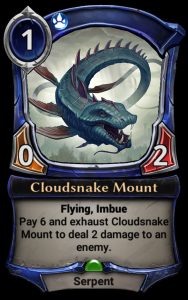 Time to catch a ride! This Serpent might not be able to hit hard on its own but with Imbue we can find it a ferocious rider. It’s not like we even need something that big to make this a huge flying beast. If we can stun something as big as a 4/3 that means we now have a 4/5 flyer out of our 1-drop! And Cloudsnake Mount still has a nasty little activation for longer-games if a cheeky enemy tries to break up our Imbue chain.

The upcoming Heroes from the Depths Preview Event will let you add some sweet new Heroes to your favorite two-faction Throne decks. Earlier today, we revealed seven of the ten Heroes… now it’s time to check out some legendaries with Imbue! 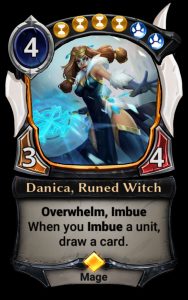 Danica makes your Imbues even grander, drawing you a card every time, including when you play another unit with Imbue. With her Overwhelm, Danica harnesses the might of her allies to bring a crushing blow on your enemies. 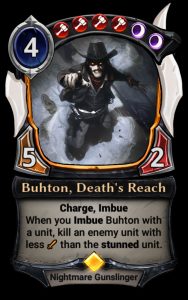 A rumor, a whisper, a myth, Buhton, the Nightmare Gunslinger has his sights set. When Buhton imbues, he takes that energy and uses it to wipe out a pesky enemy that might get in the way and deny him his spoils. 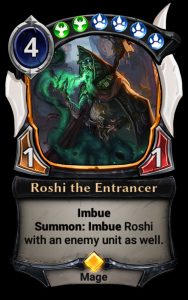 Roshi sees past petty alliances and lures foes in, taking their strength as his own. There’s no enemy too big for Roshi to deal with. By imbuing multiple units including the enemy’s best, who will be left to stand in Roshi’s way?

Start brewing up your best Throne decks and get ready to battle with all 10 of the Heroes in this weekend’s event, earning sparkly new packs of Argent Depths to open at the set’s release!

And be sure to pick up the Argent Depths Pre-Order Bundle before it disappears when the set goes live!