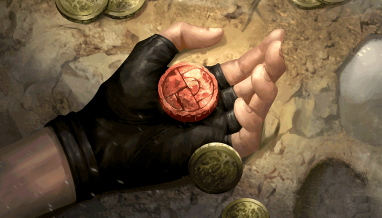 This is where it starts. This changes… everything.

Maybe not exactly where it starts—that was already her doing—but here is where it picks up, where it turns into inevitability. 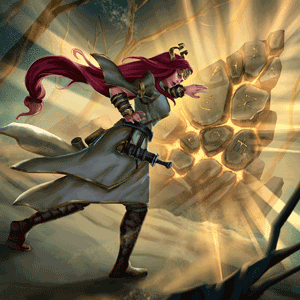 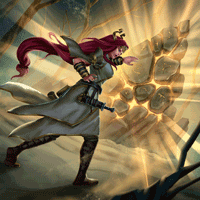 She sat alone in her dusty, scroll-covered study. Her desk had been cleared, everything shoved aside save for a single item. A Waystone shard sat in front of her, its runes dull and lifeless.

Her first experiments with the Waystones had been… dramatic. Her mind still whirled, and now she understood why the Great Owls were so remote, so cryptic. Trying to sort the will from the may be was like trying to catch a whisper in a sandstorm.

Slowly, Talir placed a hand on either side of the stone. They looked so much younger than she felt—another side effect of her studies. No matter. It was time. Carefully, Talir mustered her will and exhaled.

The carvings on the stone flickered with warm light, like an ember stirring. The shadows in the room seemed to flinch, retreating from the glow as the Waystone responded to her spell.

He glanced around the small inn room from the seat in the corner, legs stretched out, his heavy boots resting on the edge of the bed in front of him. The room was mostly empty—his ruck was packed, his hat hung on a peg by the door.

He’d grown a little more attached to this place than he usually allowed. They always left a mark of some kind, these places, but this one had done so more than others in the past. He glanced at the sword leaning in the corner.

No matter. It was time. There was business to attend to, and he needed to see about something.

They were a day’s ride into the badlands when the call went up. “Beasts on the trail, up ahead!” The short caravan halted in the dim light, horses complaining quietly. Near the front of the group, the mage frowned, holding her worn oak staff tightly in one hand, a torch in the other. In the wagon, the old historian grumbled, and a young, redheaded woman clutched a pistol, scanning the bleak landscape with a worried gaze. 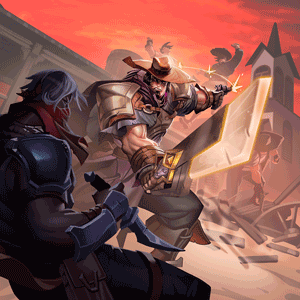 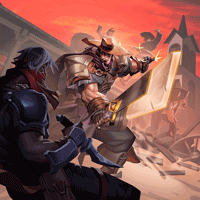 “Hold!” the caravan leader called, waving a hand. The scout, riding twenty yards ahead of the group, nodded nervously and turned, careful to stay in the feeble ring of light cast by the group’s torches. As he passed the caravan leader and her companion, the scout pointed. “Up ahead. Big, scaly things, claws like Clan spears. Never seen anything like ‘em before, and I’ve been through the Direwood.”

“Sounds like you’re up,” The caravan leader, Kit, said, turning to the mounted figure beside her. “You said you’ve handled Shadowlands critters before. Time to earn your keep.”

“Alright,” Jekk said, stepping down from his horse. “I’ll see what I can do, but I told you back in town that this place is a bad idea for the likes of you.”

Kit shrugged, “If it ain’t us, it’ll be someone else. Good money getting thrown around to get these wastes charted.”

“Yeah,” Jekk spat as he pulled out a heavy shotgun and strode up the path. “Good luck with that.”

Jekk’s bulky frame faded into the dark mist. Word had gotten out that the Praxis mages could relight the ancient rocks, and somehow cut paths through the Shadow. Soon, every poor bastard with a lick of magic was trying their luck. People were vanishing every day into the Shadowlands, looking to find a lost relic and make their fortune. Many never returned, and most that did were as good as gone. But they kept coming.

You'd never be the same 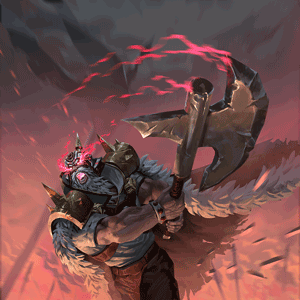 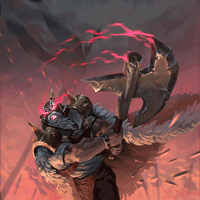 There was a muted crack from ahead in the fog as a single gunshot broke the eerie silence.

After the first few months, stories started coming back. Of tall, four-armed monsters that spoke in riddles as they tore men apart, and buzzing insects that burrowed into your ear as you slept. If you went too far, some said, you might meet yourself coming through the black mists. And the deeper you went, the fewer and farther apart the Waystones became. Between them, the terrain twisted, warping your path and spinning you around. The Shadowlands, it seemed, were all too happy to welcome these newcomers.

Kit looked up as Jekk brushed past, holstering his weapon.

The bounty hunter shook his head. “Ran off at the first shot.” He grimaced and pulled a heavy slug from his pocket. “Ammo’s unreliable out here. Sometimes dead, sometimes volatile. Some of the beasts’ll steer clear if they smell it on you, though.”

“I’ve noticed that,” the head woman replied. “Not just bullets either, but powder, raw ore, anything. Seems like the Shiftstone doesn’t agree with this place.”

“That makes two of us,” Jekk said, pulling himself back into the saddle. “Let’s keep moving.” 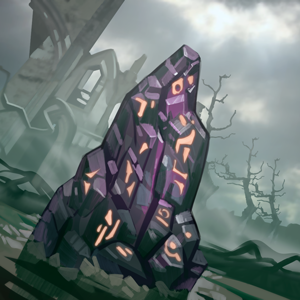 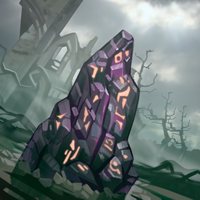 They found the bodies two days later. The scout and mage had ridden ahead, looking for the next Waystone, when they stumbled across them. Horses, their stomachs ripped open, still tied to a thin, lifeless tree. Beyond them was a camp, or what was left of one. Four torn and shredded tents lay around the scattered remains of a campfire. Five corpses, four humans and a Censari guide, lay amidst the destruction, their flesh grey and sagging.

“What did this?” The mage asked, her torch casting uncertain light over the scene.

“Looks like poison,” the Cabal woman murmured, poking the centaur’s flank with her pistol. “Something strong.”

“You’d know poison at a glance?” The scout said quietly, lifting up the flap of a tent with a machete.

“Shut up,” the woman growled. “Hey, if you see anything good in there, grab it.”

The mage frowned. “I want no part of stealing from the dead.”

“Quiet,” Kit barked, hand gripping her gun tight. “No time to bicker. We need to figure out what killed them… and if it’s still around.”

“She’s right,” Jekk grunted, “on both counts. No tellin’ what might be listenin’.”

“Enough!” The old man snorted, standing up from his seat in the wagon. “I am not paying to gawk at viscera, I’m paying to survey the Shadowlands. We need to keep moving!”

Kit frowned, “You’re also paying for safe passage, old man. And if you want to stay safe, I suggest you keep your mouth shut.”

“Are you threatening me?” The man spat, his voice echoing faintly through the mist.

Before anyone could respond, there was a wailing shriek as the Shadow contorted around the wagon. The horses screamed, one dissolving into darkness as a swarm of crawling things boiled out of the mist.

“Damn!” Kit cursed, hand blurring to her hip. She and Jekk began to fire, but the tide of nightmares swarmed over the wagon. Twisted claws tore at the surviving horse, and the historian let out a strangled cry as he was pulled away from the group, vanishing into the darkness.

“Thisaway!” Jekk bellowed, backing into the ruined camp, away from the attackers. Kit followed, taking careful shots, each one blasting a nightmare apart as the horde surged toward them. Fire roared and consumed a pair of nightmares to their left, and Jekk looked up to see the mage, hand smoking, step up beside him. 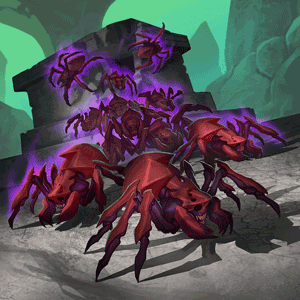 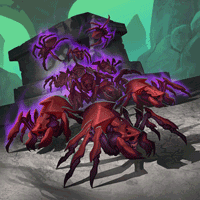 “Help!” Heart pounding, Kit turned towards the panicked cry. A smaller fissure had opened in the ground on the other side of the camp. The scout was flailing with his machete, one arm hanging useless at his side, as a torrent of spiders poured out of the earth. The young Cabal woman stood at his side, firing into the swarm. “You two, cover me!” Kit shouted.

“Got it,” Jekk said, and grunted as a malformed hand knocked the gun from his grasp. Teeth bared, he drew a short, flat blade and jerked his head at the mage. The pair stepped in front of Kit, blocking her from the worst of the dark tide. As she ran toward the other two, a trio of spiders lurched her way. She shot two out of the air, but then her pistol clicked, empty, and the third landed on her wrist. Kit felt fangs trying to pierce her leather glove, and, with a cry of disgust, she tore the creature off, slamming the butt of her gun into its venom-coated mandibles over and over.

When she looked up, the noise had stopped. Behind her, the air had stilled, and the nightmares had faded into the darkness. Jekk and the mage stood, surrounded by ash and crumpled corpses. The mage was gasping, leaning heavily on her staff, and Jekk scowled, looking down at the Shadow sizzling on his sword blade.

On the other side of the camp, the scout was on the ground, unmoving. His machete was buried to the hilt in one spider, but two more had attached themselves to his leg. Besides him, the red-haired woman was panting, smoke twisting from the barrel of her gun.

“You okay?” Kit asked her. She nodded, but didn’t speak. 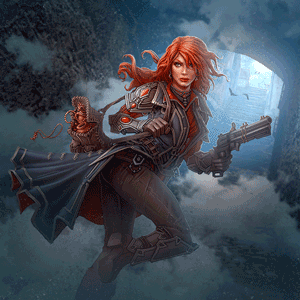 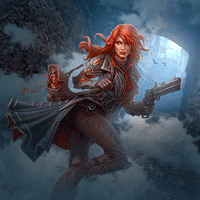 “Alright,” Kit said, loud enough for everyone to hear. She stood, dusting herself off, and looked over at the splintered remains of their wagon. “We turn around, get back to—”

Behind her, there was the quiet click of a hammer being drawn.

“Not a move, boss,” the Cabal woman said, her voice suddenly cool and calm.

Kit froze. Her pistol was at her hip, and while she might have been able to outdraw the other woman, her gun was spent, emptied.

“Shut up!” The woman barked.

Jekk winced, “Careful, there may be mor—”

“I said shut up!” The woman shouted again. “This has gone bad enough already.” Eyes wide, she pointed the gun at each of them in turn. “Your shiftstone. All of it. Bullets, dust, whatever you got.”

“You heard the lady—really don’t think you wanna do this,” Jekk said, stepping forward, sword in hand. “You won’t make it back in one piece.”

The woman sneered, taking a step away. “Price has never been higher. The mines keep raising the cost, but the Shadow seems to hate it, so you better bring some on every expedition, right?” She grinned, “It’s a new market, and my people want in.”

Price has never been higher... 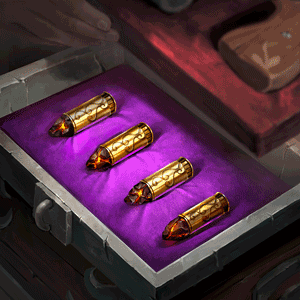 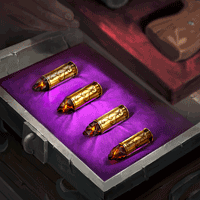 As she spoke, Jekk turned to look at Kit and jerked his chin. Kit followed the bounty hunter’s gaze, and her eyes steeled at what she saw. Something moved in the fissure behind the woman. Something big. Before Kit could say a word, Jekk took another step forward.

“How many shots you got left, kid?”

The woman paled, and pulled her red hair behind one ear with her free hand. “Enough. Stay back, I said!”

“Nah,” Jekk shook his head, taking another step towards her.

“Stay back!” The woman shouted, raising the gun. Giant, insectoid legs burst from the ground on either side of her. The gun flew from her grasp as a huge spider pulled her down into a cavity in the black earth. Her scream was cut short as the dirt collapsed over her.

In the silence that followed, the mage began to retch.

Sword at the ready, Jekk stooped to pick up the scavenger’s gun. As he stood, he flicked open the cylinder and sighed.

“I’ll be damned, she wasn’t bluffing,” he said, holding the gun out to Kit. Five bullets remained, their shiftstone tips glowing. “These’ll help you get back in one piece.”

Kit raised an eyebrow, “Where you going?”

Jekk looked at her from beneath the brim of his beaten hat, and nodded past the ruined camp into the dark. “Thataway.” He handed her his shotgun, “This’ll help too, but you should move quick.”

Kit grimaced and shook the bounty hunter’s hand. “All right then. Can’t decide if you owe me a drink for leaving us, or I owe you one for saving our hides, but next time we meet, we’ll have a couple.”

Jekk nodded and tipped his hat. “Don’t hold your breath.”