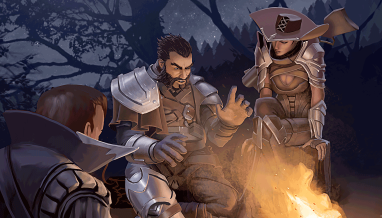 Nights were never comfortable in the Shadows.

The sky felt low, and darkness hung all around, pushing against the glow of their campfire. Still, there was some warmth there for the three figures who huddled around, staring at the flames. And they had, somehow, started to get used to the shadows. They were still alert, wary, but with more experience now.

The first figure, an older man with a weathered face, cleared his throat. “Alright. If no one’s gonna say it, I reckon I will.” He glanced at the other members of the expedition. “We done it. We’re rich.”

The trio grinned, unable to hide their excitement. Farther from the fire, a fourth figure, a wounded man in dusty white armor, lay slumped against a nearby rock. Without looking up, he raised a fist in a weary cheer.

“We lost good people on the way.” The elf added, leaning back against her heavy pack. “Can’t spend that fortune if we die crossing back.”

“A fortune, eh?” The third figure, a large man with a close-cut beard and a collection of battle-scars, asked, frowning. “Think they’ll pay out?”

“For the first recorded expedition into Xulta?” The elf scoffed. “Of course. Explorers Guild, the Arcanum, the Throne, take your pick. They’re all hungry for knowledge.”

“Better know what we’re sellin’, then,” the old man said, setting his tin mug down. “Come on, cards on the table. We split up to scout when we hit Xultan soil, so let’s swap notes.” 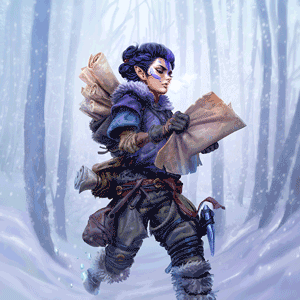 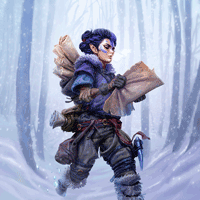 The Shadow thinned gradually, twisting behind her until it was gone, as Kiara found herself walking up a low rise on foreign soil. She noticed the sun immediately. It was large; three, maybe four times the size she had been expecting, and hung heavy on the horizon. It was a strange color, too, glowing a bloody orange-red behind the mountains. Their silhouette was stark against th… hold on.

Kiara froze mid-thought. Around her, crickets chirped in the cool evening air. The mountains! Shock ran through her. Hands shaking, Kiara dropped her backpack and began to fumble through its contents, shoving a heavy machete to one side and dropping a thin scroll case in her haste.

The pattern of those peaks… This is impossible!

Kiara pulled a sketchbook and stub of pencil from her pack, and went to work where she stood. After minutes of breathless sketching, she exhaled and looked up from the page. Carefully, Kiara picked up the leather scroll case and withdrew a map of the world. Her world.

There could be no mistaking it. The mountains on the Xultan horizon were nearly identical to the Skycrag mountain range.

“That’s it?” The mercenary said, throwing another dead branch on the campfire. Embers rose up like a swarm of wisps as he asked, “How is that worth a fortune? Mountains is mountains.”

Kiara rolled her eyes. “No, you dolt. They don’t just ‘have some mountains,’ they have our mountains. Xultan topography is practically the same as our own! Besides,” she tapped the scroll case tied to her pack, “I have the first maps of Xulta. That’ll be worth a pretty penny.”

“Their sun ain’t the same,” the old man said, thoughtfully. “I wonder if it ever sets…”

Outside the ring of firelight, the soldier coughed, his empty scabbard rattling on his belt. The noise shook the old man from his reverie. “Anyways,” he said, looking up at his friends, “My turn…” 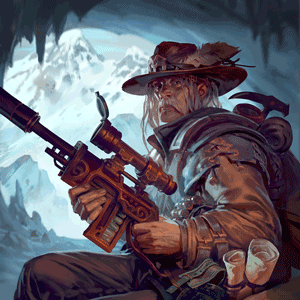 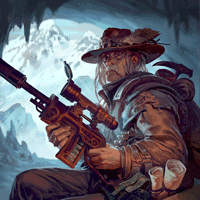 Something felt wrong. Bishop was crouched halfway underneath a heavy pine, his rifle slung over his back and dead needles poking into his palms. He had spent the day climbing into the foothills when the woods around him had gone silent. No wildlife, no wind, nothing. For the last hour, the only sounds had been the crack of twigs beneath his boots and his own breathing.

Bishop had been a backwoods hunter long enough to know when he had become the hunted.

“Ain’t wolves,” he muttered. “They’d be callin’ out to one ‘nother. Not a bear, they ain’t the subtle type.”

Whatever it was—wherever it was—his stalker seemed content to wait and watch.

Pity I lent Kiara my knife, Bishop thought, cursing his earlier kindness. A gun like this won’t be much use if something with claws gets the drop on m—

A flash of gold light was his only warning. Bishop threw himself to one side as the tree he had been sheltering under dissolved into a shower of dust. Shoving himself to his feet, he squinted through the hazy, dirt-choked air. Panicked, Bishop whirled around. He could barely see past his own hands, but he could hear something coming towards him through the smoke.

He quickly drew his rifle and called out, “Who’s there? Show yerself.”

There was no answer, but as the smoke began to fade Bishop saw his attacker.

She was taller than him, with sculpted armor and flowing hair made of light. Her eyes burned, and several wisps floated near the ground around her. She had one arm outstretched, her palm pointed towards him. 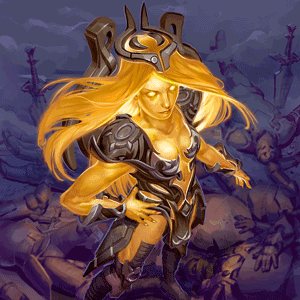 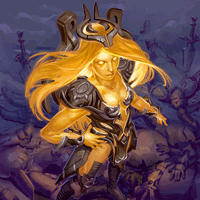 Bishop gripped the familiar wood stock of his rifle with sweaty hands. “Here,” he said, “I’ve seen yer kind before. Out in th’ badlands.”

“You are not from here.” Her voice was loud and dispassionate. It had not been a question.

The lumen cocked her head to one side, looking at his rifle. “You did not strike out,” she said in the same emotionless tone, “even when I removed the growth.”

Bishop’s gaze darted to the smoldering remains of the pine. He gulped. How had she done that? He was a quick draw, but would it be quick enough? Licking his lips, he replied, “T’ be honest, I ain’t never had to shoot no one with this. Just huntin’ for a meal, or t’ scare off predators.”

Bishop felt the light-filled eyes bore into him, and the lumen said, “You do not lie. You are cautious.” She paused a moment, then added, “Perhaps you will heed this: Turn back, hunter.”

“Now listen here,” Bishop said, but she interrupted, a sudden wind whirling around her as she spoke,

“Your world is wounded, and you would threaten others?” the lumen snarled, “the arrogance. As your world expands, others turn to dust.” With each word, her voice grew louder, and the glow of her body brighter, until Bishop was forced to look away. Over the roaring winds, the last words he heard were: “Consider your kind warned…”

When Bishop peeked from between his fingers, she was gone, the forest around him ringing with shocked silence. 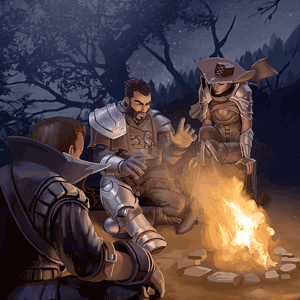 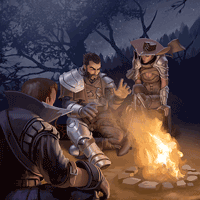 “Just like that?” The mercenary asked, incredulous, his voice echoing from his mug.

Bishop nodded. “One minute she was there, then,” he shrugged, “gone. Just like I told it.”

“Fascinating,” Kiara said, looking up at the starless sky. “I wonder what she meant…”

The group was quiet, save for a restless breeze and the pop of the campfire.

“Think Xulta’s where them bright folk come from?” Bishop asked.

“No.” The mercenary said, shaking his head.

“You sound certain,” Kiara laughed. “Come on, don’t hold out after Bishop and I shared our stories. What did you see?” 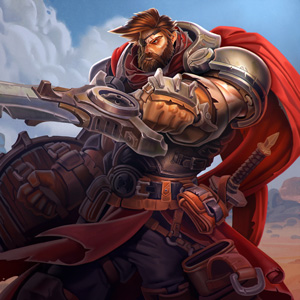 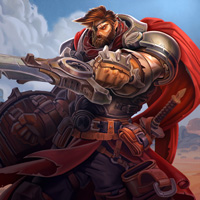 The man stood in the middle of the road when Will rounded the corner and saw him. The mercenary had decided to head north after crossing into Xulta, and had come across a wide, well-worn dirt road. Without any other guidance, he had followed it for a day.

The Xultan in the road was tall. He wore a roughspun tunic with some sort of heavy armor over it. His head was shaved, and as Will drew closer, he realized that the other man was barefoot.

The man glanced up, saw Will, and greeted him,

“Er,” Will said, halting. He reached for his weapon, but halted. The man was not wearing armor, but a heavy vest made of stone. He seems calm enough… Will thought. Cautiously, he said. “Sorry mate, I don’t…” he shrugged. “Not really from around here.”

The Xultan blinked, confused, and then his smile widened.

I don’t see any weapons on him… Will thought, looking the other man over. Unfazed, the Xultan repeated his question and extended a calloused hand. Scarred knuckles though, Will noted. Cautiously, he held his hand out and nodded.

Without warning, the Xultan stepped forward, hooked a heel behind Will’s foot, and swept the mercenary off his feet. Will fell, slamming into the hard-packed ground with a dull thud. Pain spread from his right shoulder and, gasping, Will shoved himself to his feet. As he did, he drew his shortsword. But the other man had not moved to attack him. Instead, he stood there laughing. Is he enjoying this? Will realized through the ringing in his ears.

The Xultan man gestured, beckoning Will towards him. “Ha, ha. Grodov yura!” 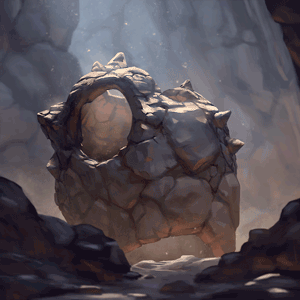 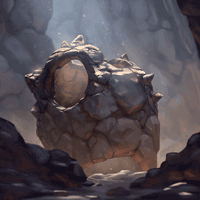 Fine, two can play at this, Will thought, and sheathed his sword, letting his heavy pack slide from his shoulders. “There,” he said. The Xultan grinned and shrugged off his stone armor.

Will took another step forward and the Xultan charged, head low and arms outstretched, trying to grapple with Will. The mercenary steadied his stance, and let the Xultan’s shoulder impact his chest. Before the Xultan could regain his balance, Will looped his arms around the man’s shoulders and dropped to the dirt. The Xultan hit the ground face-first, with Will on top of him.

“Ha!” The Xultan roared, pushing himself to his feet and brushing dust off his tunic.

Panting, Will smiled, “This how you greet people ‘round here?” The Xultan said something in his language. “Right,” Will muttered, lowering himself into a wrestler’s stance. “Don’t know what I expected.”

With a shout that shook the earth around them, the Xultan bulled forward. As he lunged at Will, the mercenary slammed his elbow into the man’s shoulder. The Xultan grunted, but did not stumble. Will raised his arm for another blow, but winced as the pain in his shoulder flared. Before he could break the man’s hold, Will felt a rough hand grab his foot and lift.

“What?” Bishop said, howled with laughter. “Are you tellin’ me that a Xultan put you on the ground? Twice?” He grinned through his mustache. 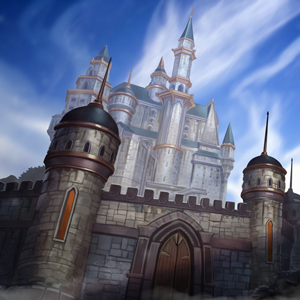 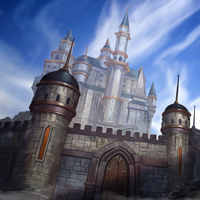 “Shut up,” Will grumbled, arms crossed. “After that he helped me up and lead me to a spring. Kept going off about something called ‘Grodov’ as I refilled my canteen.”

As a group, the three turned to look at their wounded companion. The fire had burned low, and the soldier’s beaten armor barely reflected the dull glow. He was asleep, his breathing ragged. “Think we should get his story?” the elf asked.

“Let him rest,” Bishop murmured. “He ain’t healed up yet. Besides, it’s late. This place always gets worse at night. Now, who wants first watch? Tomorrow we head for home…

…The world needs to know what we’ve seen.”