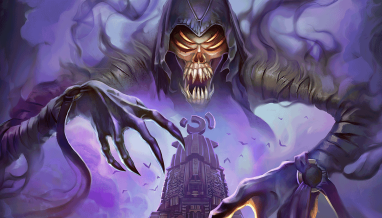 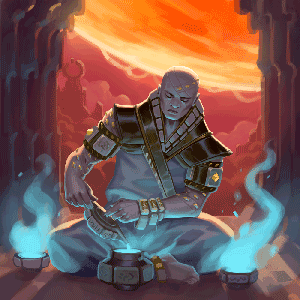 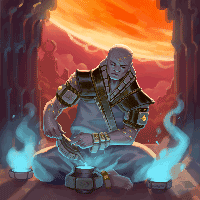 The Listeners convened on a quiet morning. The stone courtyard was open to the sky, and the clouds were red with Sol’s fire. Woda sat on the ground, feet bare and robes dusty, and made tea on a small brazier. As a delicate, grassy scent rose from the cups, he said in a deep, deliberate voice, “Much of Xulta is burning. Sol’s work is nearly complete.”

“Nahid and her cult have not yet prevailed,” Ezuzi replied, holding his golden staff. “The winds may change.”

Across from him, Galai snorted derisively. “And we are supposed to wait?” The Listener crossed his arms, the air around him dancing with heat. “The council of Kodosh is welcome, but unwise.”

Ezuzi slammed his staff on the ground and the winds began to howl. Woda looked up sharply as well. “Patience, Galai,” he rumbled, and the ground shook with warning.

Galai’s response was cut short as Incarnus paced the courtyard. “They won’t stay dead,” the hunter growled. “I have torn a beast’s heart out myself, only to watch it rise, the wounds filling with darkness.”

The Listener Blitrok sat to the side, eyes closed. As the winds grew, a soft rain began to fall. She tilted her head, as if listening, and said, “Fear drowns our better judgment.” Waving a hand at the paladins by the courtyard’s far gate, she commanded, “Let them in.” 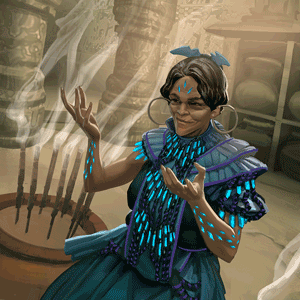 The guards blinked, and one opened her mouth to question her just as someone rapped loudly on the other side of the gate. Two figures stood outside. A long-haired man with no gem tattoos stood next to a wrinkled shaman who leaned on a warped staff for support. The man held a shield over her head, trying to keep the rain off.

The guards swung the gate open and the two stepped into the courtyard. “The dragons and their cult are the newest chapter of an old tale,” the woman called, her voice rising over the gathering storm. Ezuzi opened his mouth to speak, but a look from Blitrok halted his objection. Yorja was a shaman of Linrei, and knew more of Xulta’s past than any other historian or mage. The old woman came to a stop in front of the Listeners. “This threat does not come from the light of Sol,” she said, “but from a darkness beyond.”

Wiping rainwater from his eyes, her companion nodded grimly, “Nightmares have invaded Xulta.”

The morning skies of Xulta were dark with ash, and Eremot savored the screams rising from the burning city below. The dragons were here. Sol’s wrath is manifest. The jungle was thick with fear. They cannot be killed. They cannot be stopped.

Eremot found those hungry for power. 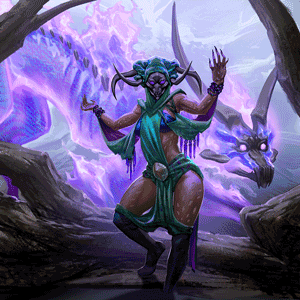 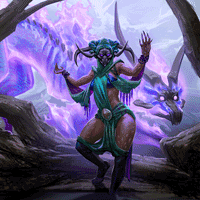 If the nightmare had a mouth, spread out as it was among many winged hosts, it would have bared its teeth in a triumphant grin. Finally. It had tried, generations ago, to seep into this world and feast on its horror. But Eremot had been confronted, beaten back, reduced to scavenging the Shadowlands like a common shade.

After ages in the pale badlands, it found an ally, someone hungry for power and willing to serve its will. Working with her, Eremot found new ways into Xulta, and new allies it could tempt. From their place in the swamps, the dragons and their bone-masked sycophants could haunt the land, and keep its people in an endless thrall of terror.

Across Xulta, among the towering Cloudfang mountains, Eremot sensed… something different. The sound of great stones crashing together like thunder, and memories of a brilliant, blinding light. Not just memories, but dreams. Hundreds of identical voices raised in anger. Intrigued, Eremot drifted closer on bat-like wings.

High on a rocky hillside, far from any town or Xultan city, a figure slept next to a smoking campfire. The furs the man wore may have once been rich and warm, but they were in tatters now. His hair was dark and unkempt, and partially covered a purple brand. With a tendril of darkness, Eremot snuffed out the fire’s last embers and crept into the stranger’s dreams.

Horus was back in the throne room. Around him, men—men just like him—charged as one. Behind them, cold mist twisted around another figure. The crescent mark over his eye blazed with a harsh light as he hissed, “We are many, we are one. You cannot shut us out.” 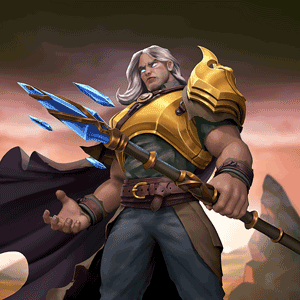 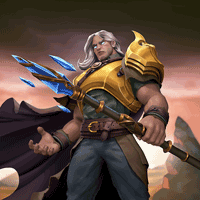 In front of them, standing at the base of a great throne, a single man faced down the army of strangers. His white hair whipped around him as lightning arced through the air and the back of the Throne whirled to life. Caiphus. Horus’ gut churned with hate.

Yes! A hungry whisper twisted through the room. Horus froze. Had anyone else heard it?

In front of him, Caiphus gestured, and the back of the Throne began to fill with a golden glow. The Spire began to shake, and chunks of masonry fell from the ceiling around them.

That light! Something hissed in his ear. Horus flinched and turned, but there was nothing behind him. When he looked back to the Throne, Caiphus and all of Horus’ brothers were drowning in darkness. Tendrils sprung from the shadows and coiled up their legs, seeking their throats.

“No. No no no,” Horus heard himself say, panicked. “This isn’t how it happened!”

I have seen power like this before, the whispers mused, and Horus felt the darkness settle on his shoulders like a deadweight. The scene in front of him faded as his brothers struggled to breath.

This time, the voice in his ear was more than a whisper.

“Nightmares. Are you sure?” Woda asked. Overhead, thunder rolled through dark clouds.

Yorja nodded. “The signs are all the same. We would be fools to ignore them.”

The dragons are withdrawing... 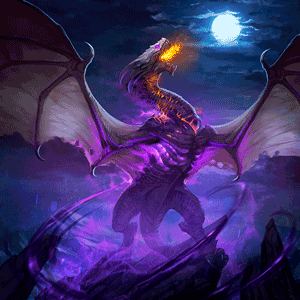 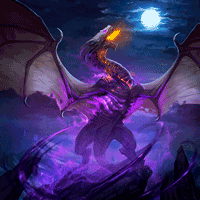 “That Eremot was driven back,” Yorja cut in, waving her hand. “The champions of old forced it to flee. It has had generations to plan its next attack.”

There was a splashing sound as a paladin ran through the muddying courtyard. He was older, his robes and headdress finely made, and his eyes were wide as he arrived, panting.

“Eloz,” Blitrok greeted him, her hands held out to the falling rain. “What news?”

“The dragons are withdrawing,” Eloz said, voice full of confusion. “One of my riders watched Voprex leave the city of Talman only half-burned. Other scouts report similar across Xulta.”

Gnash turned to Yorja as the Listeners erupted into conversation with the senior paladin. “Why would the dragons retreat now?” Gnash asked quietly.

Yorja frowned, her blue eyes pensive. “Something has changed.”

Where is the Throne?

On the hillside, Horus writhed in the nightmare’s grasp. Eremot had manifested further, its long fingers curling around the stranger’s torso. “Where is the Throne?” He demanded, pushing a sharp, bony finger into the man’s shoulder, feeling a pop as the joint shattered.

“Argenport!” Horus’ voice was ragged with pain. Where were they? Where was anyone? He had fled to the mountains to seek quiet. Up here, he could barely feel his brothers’ thoughts.

The nightmare snarled. That girl in the Shadowlands had struck it down with power like the Throne’s. If it could possess it… As the man cried out, Eremot caught the flash of another memory: The Throne’s blinding light swallowing the attackers, which slowly faded, replaced by the red glow of a different sun.

“Here?” Eremot roared, its face just inches from its captive’s, “The Throne sent you here?” It dug its claws in further and the stranger’s face with white with pain. “Tell me!”

“S-some of us,” Horus stuttered. “Please,” he begged, eyes rolling back in his head.

Furious, Eremot threw the limp body to the ground and tore into the stranger’s fading thoughts.

The memory of a farm. A small place filled with quiet joy, which soured into fear, then grief.

The Shadowlands, dunes dotted with men like himself, all facing a bald man in traveler’s clothes.

Light from the Throne, pure and painful. Horus groaned, and forced his aching body to stand. As his vision cleared, he saw the forms of his brothers on the ground next to him, still unconscious at the base of the Throne.

The Throne? But… Horus looked up.

Sol hung above him, a red, angry star. He was standing at the top of a wide plateau, which towered above a lush, misty jungle. In the center of the plateau was a crater of scarred and shattered earth. And in the center of that crater…