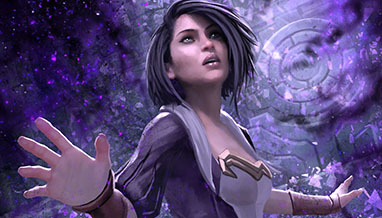 If you haven’t played it yet, go get Awakening now!

The throne room is filled with harsh light and twisting shadows. Someone screams—a sound of rage and pain.

A sharp ringing fills Coslo's ears, drowning everything else out as he tries to push himself to his feet. His head aches, and his chest feels like a single, massive bruise. What happened? he thinks muzzily, stumbling over a shattered flagstone.

Oh, right. The Festival of Inspiration. Kaleb and Eilyn. Avenging thunder interrupted by the bark of Kaleb’s gun. Vara’s shock. Tears. After that, running, the depths of the Spire…

And then the witch. Sand whirling around her like a seething hourglass, as she and Vara exchanged barbs and riddles. And after her…Rolant  flesh writhing and armor gleaming as he blocked their path, his dead eyes resolute.

But then… Coslo winces as the ringing in his head redoubles. His whole body hurts as he finds himself against a cool stone wall. The room around him is filled with smoke, and many of its pillars have been reduced to rubble, or blackened with heavy scorch marks.

“Then?” a half-familiar voice prompts. Coslo flinches as a torch overhead hisses and flares. This doesn’t feel like one of my visions. Coslo shakes his head. 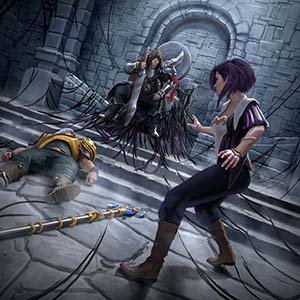 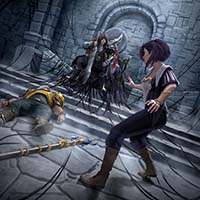 “Then the throne room,” he mutters. Behind Coslo, something detonates with a wave of force that sends him to his knees. The throne room… where the old king’s body was torn apart, dissolving into ash and light. But the prince—Kaleb’s—expression. It was Caiphus. Something in the way he held himself, and the empty cruelty of his voice.

“Turn around,” someone says, just behind him. Coslo’s hand flies to his waist, but his knife is long gone, lost in the chaos. Eyes wide, he whirls around…

…and beholds his world being torn in two.

On the left side of the Throne, Vara stands, cloaked in regal shadow. The darkness shifts and sharpens around her, turning into claws that lash out at the man across the room. Kaleb—no, Caiphus—stands in the middle of the assault, laughing. He holds a sword in one hand, its blade warped by the burning aura surrounding him, and clutches a spear in the other, its tip glittering with Waystone shards.

Between them, the Eternal Throne shudders and glows. The stones that make up the great disc in the seat’s heavy back are hovering, but there is no pattern to their movement now, just jolting chaos. White light crackles around the seat, and it hurts Coslo’s eyes to look directly at it.

“The throne!” The whisper is in Coslo’s head again, hot and furious.

“What are you?” Coslo gasps.

“That which was used. Cast aside,” the voice snarls in reply.

“K-Kaleb?” Coslo stutters. But any reply is silenced as Caiphus’ voice booms out over the turmoil,

“It could have been you, Vara! The body does not matter, only the purpose. Only our Pact! But your mother would not stand for it. She had to be removed.” 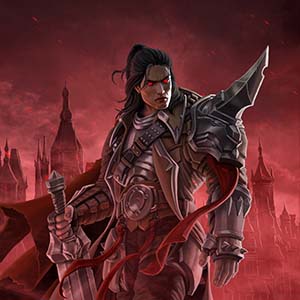 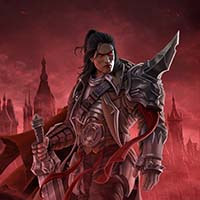 “I hate you!” Vara screams over the roar of the throne. “What you are doing is wrong!” The shadows around her surge forward.

“It is our duty!” Caiphus responds. With a gesture of his spear, he cuts a hole in the air, and a pair of gleaming, silver constructs pull their way into the throne room. Caiphus barks an order in Kaleb’s voice, and the two lumber forward into the gale of darkness.

“Vara,” the king says, shaking his head, “you’ve never held power like this before. I have had lifetimes.” Coslo watches Vara fling out a hand, and purple light punctures one of the constructs, its metal hide shrieking. But the other presses forward, reaching for her. Vara stumbles backwards, barely avoiding its grasp, and her eyes widen in fear.

Her father smiles without humor. “You are scared. I can feel it. Fear has always haunted you. Stop this nonsense, and I promise that there will be no more fear.”

Coslo tries to call out, “Don’t listen!” but he doesn’t know if Vara can hear. Coslo watches her falter, hands falling to her sides. Then Vara’s eyes flash, and her jaw sets.

“How dare you?” she hisses. The construct reaches for her again, and the darkness embraces it, pulling it into the shadows as Vara strides forward, power gathering between her hands.

“I will destroy your purpose, your legacy,” she sneers. Caiphus hurls a blast of fire, but it gutters out before it can reach her.

I will take what is mine! 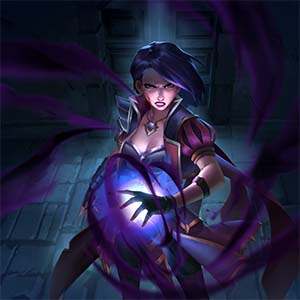 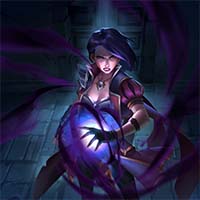 Vara’s voice rises over the storm, “I will tear this Spire down, brick by brick.” Caiphus’ grin falters, and he takes a step back. Between them, the Eternal Throne roars, the glow around it intensifying.

“And I will take the Throne,” Vara calls as the power she is holding grows, flaring with the Throne’s light. “I will take what is mine!” The furious strike flies from her hands. Coslo sees Caiphus’ expression as his hands start to move in some defensive motion. He is too slow. Vara hits him with a storm’s wrath, striking the king square in the chest. Caiphus roars, and the absolute light of the throne flares outward, devouring his form.

Then the shockwave hits Coslo, hurling him back into the wall. Pain blurs his thoughts, and as his vision fades, Coslo watches Vara pick her way through the rubble and place a hand on the Eternal Throne.

Wait… he tries to say, raising a hand, but everything goes dark.

Between one breath and the next, the great stone room around Vara was whole again. The Eternal Throne was still, quiet, and she could hear the sound of running footsteps, coming closer.

As Vara started to rise, the memories came crashing back. She remembered. Eremot, and its creeping whispers. The world of her nightmares. She looked down and saw herself, an adult again, sword at her hip, and the scar from Azindel’s now-shattered gift at the base of her throat. 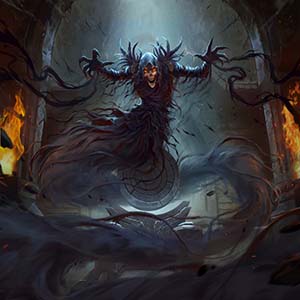 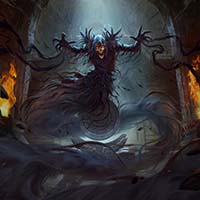 The footsteps grew louder, and Kaleb burst through the heavy double doors, shotgun held at his side.

“You!” Vara snarled, voice contorted in pain. The throne responded, thrumming with an ominous force.

“Woah,” Kaleb called out, stumbling to a standstill, “easy!”

Vara started to reply, darkness pooling around the base of the throne, when a voice called, “Vara? What is going on?” and all her anger fled.

Eilyn stepped into the room, one hand resting on the hilt of her weapon, her expression wary. With her other hand, she led a frail-looking Talir, her hair pure white again, despite her young appearance.

“Mother,” relief flooded through Vara, and she leapt up from the throne, “you’re safe!”

Vara’s step faltered, and as it did, Talir caught her gaze, the former Arch-Magister’s eyes piercingly sharp. She sees more than she lets on, Vara reminded herself.

“Indeed…” Vara said, pensive, and turned to look behind her. The throne—her throne— sat quietly, the golden stone at the center of the disc shining with a faint light. There were no whispers of nightmare, no screams of unleashed power. She was safe. She had won. Vara let herself be led away, still feeling the weight of her aunt’s searching gaze.

“Been a long night,” Kaleb quipped as they left the room together. “I had the strangest dreams…”

When Coslo awakes, the shattered throne room is dark, save for a single guttering torch. The urchin’s eyes snap open, and with a panicked breath, he sits bolt upright, eyes searching.

The throne is empty. Vara is gone.

“She left. Abandoned you.” Kaleb’s voice says, hot in his ear. “She didn’t even pause.” Coslo flinches as a vision overwhelms him. Icy water, forgotten ruins, lungs screaming for air.

“Wh-what is this?” Coslo gasps, wrapping his arms around himself

Kaleb’s anima—what remained after Caiphus’ ritual—chuckles, “I’ve been around. Seen some things.” Another vision consumes Coslo: a howling blizzard, the roar of a bear, and a woman in emerald finery.  “For what good it did me,” Kaleb adds, bitterly.

The air behind them writhes with nightmares. 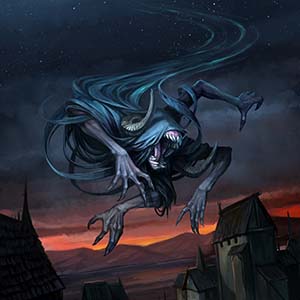 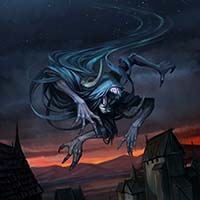 Before the dregs of Kaleb can reply, there is a grinding noise, and the great double doors at the far end of the room begin to move. As they open, Coslo can see dark claws scrabbling at their battle-scarred frames. The air behind them writhes with nightmares Coslo tries to rise, to flee, but he is exhausted, and collapses on the second step beneath the throne. Vara, help…

As the doors are forced open, a man strides through the darkness. His robes are a deep purple, and his dark hair is long and tangled. He smiles sharply when he sees the boy, and purrs,

“F-for me?” Coslo can barely speak. Where had Vara gone?

Why had she left him? 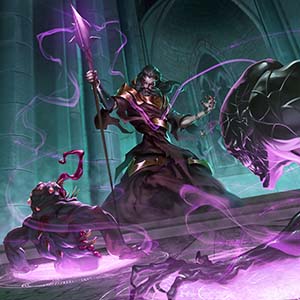 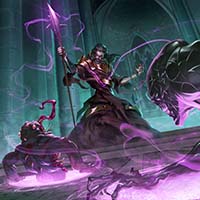 The man nods. “The stars have sung of you. I listened.” He waves a hand at himself, his fingernails yellow and cracked. Around him, the nightmares flinch and grovel. “Call me Severin. I am one of the few people who may understand you, what you see.”

Severin nods. Coslo’s risks another look behind him.

“Vara’s gone,” Kaleb’s voice hisses in his mind. “Caiphus too. They used us. Burnt us out and left.”

After everything we’d been through…

Coslo Deleph turns to the Star-Reader as Kaleb’s anima whispers in his ear, and nods.