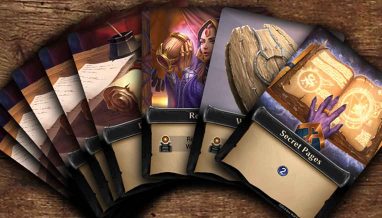 Join us at Gen Con for two Eternal: Chronicles events!

We’ve previously looked at the broad design goals and some specific new mechanics coming in Eternal: Chronicles of the Throne. In today’s Designer Diary, we discuss how players start with slightly-different starting decks and why that is desirable.

The idea of asymmetric starting positions or variable starting powers is well-established in modern board game design, and for good reason. It’s a powerful tool that game designers can use to drive toward two important objectives:

The first objective – increasing replayability – is fairly straightforward. When you’re given one unique ability out of a set of several, you might be interested in playing again to try out the other abilities. For this article, however, we’re going to focus on the second objective.

Providing directional nudges is important because it can help widen the funnel for your game, which is a fancy way of saying you want to welcome as many players into your game as you can. If you can give an easily-digestible, fun-sounding starting power to a new player, they may become more engaged right away simply due to the fact that they have a distinct identity. In addition, their power may act as a “breadcrumb” that allows them to more successfully navigate through the game’s decision space.

With Eternal: Chronicles of the Throne, every player starts with a deck of ten cards. Nine of these cards overlap with every other player: 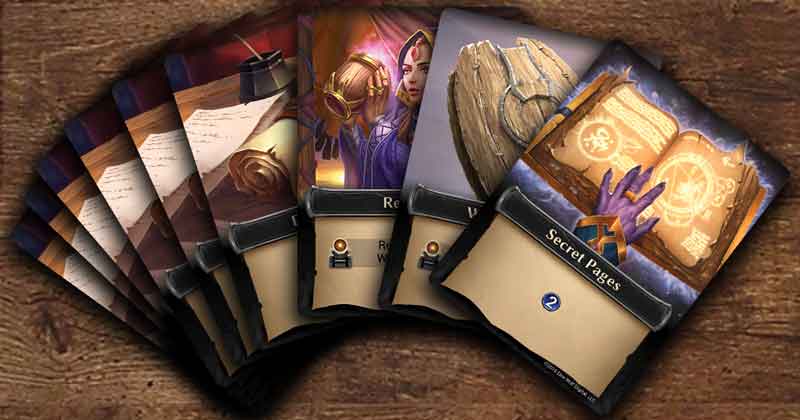 It’s the tenth card that gives everyone a slightly different path.

Before a game of Eternal: Chronicles begins, the ten basic units are shuffled, and each player is dealt one face-down. You can look at your card, then shuffle it into your other 9 basic cards to form your starting deck.

Let’s take a quick look at a handful of basic units: 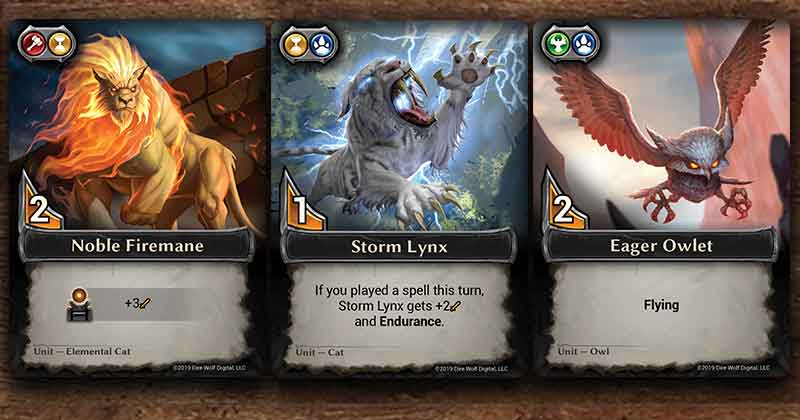 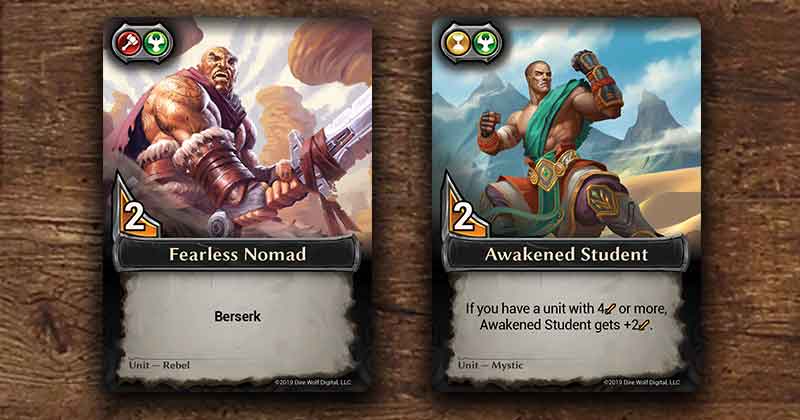 Note that all basic units have two factions, marked by the colorful symbols in the top-left corner. This alone is important because it means that some cards in the forge row that have faction abilities will work better or worse depending on your basic unit.

For example, if your starting deck has Noble Firemane or Fearless Nomad (which share the red Fire faction), you might be more interested in acquiring the Outlands Sniper, who can destroy an enemy relic if you play him in the same turn as another Fire card.

Likewise, a player who starts with Storm Lynx or Eager Owlet (which share the blue Primal faction) could get more value out of East-Wind Herald. 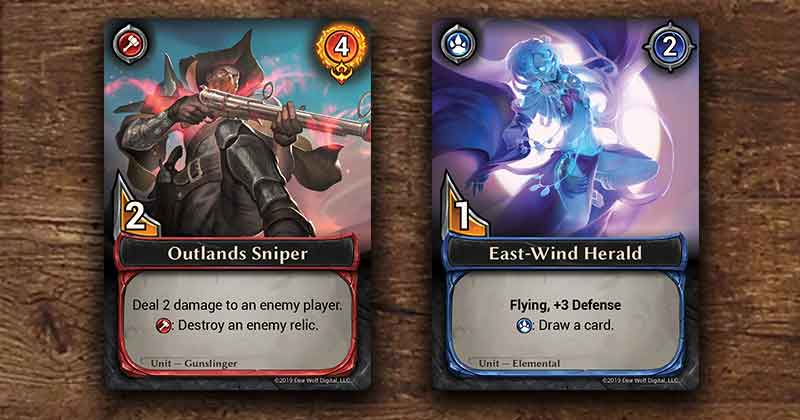 Some Bread Crumbs are Tastier than Others

Pursuing faction triggers certainly qualify as breadcrumbs at work, but special abilities on your basic units can even more powerfully highlight a particular strategic path. That’s not to say that all of them are obvious. For example, let’s compare Eager Owlet to Awakened Student. 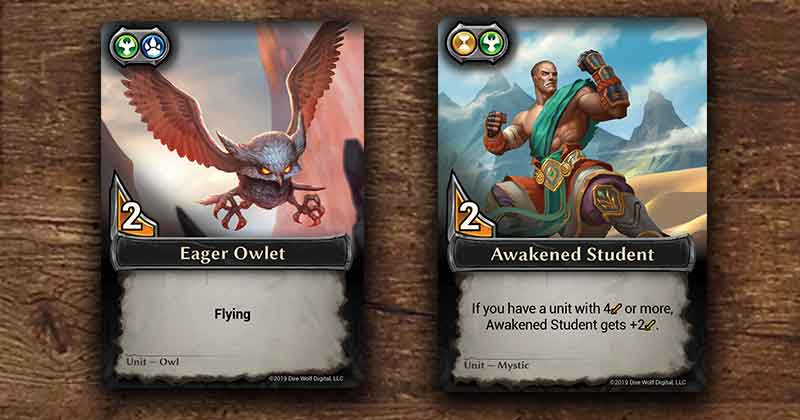 Awakened Student is about as “loud” as a breadcrumb can get. If you start with this card in your deck, your direction is very clear: add some big units with four strength or greater to your deck.

Eager Owlet, on the other hand, is not so clear cut. Where are you led when you start the game with a flying unit and nobody else has any? It might mean that you can have more success jockeying into a “race” strategy because you have a unit that your opponent will have trouble blocking.

That’s not something that a new player is going to realize immediately, and that’s fine. But even a new player who starts with an Eager Owlet may find that they’re in a good position to benefit from certain cards that are found in the forge deck. For example, these would almost certainly catch that player’s eye: 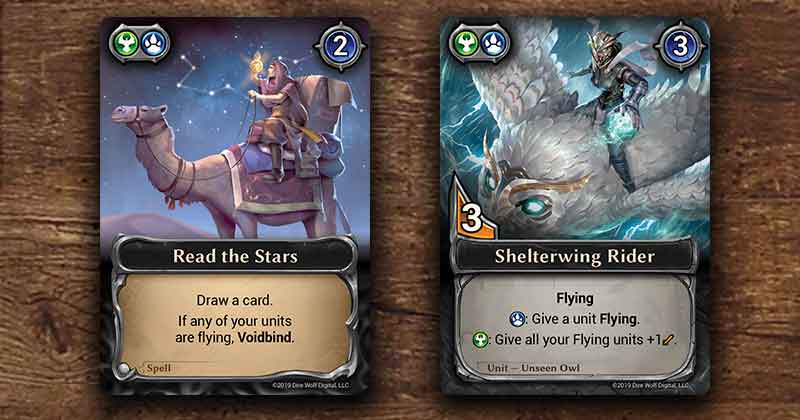 Finding the Right Level of Importance and Guidance

If you’re reading this article and thinking to yourself, “but I don’t want to be held by the hand, I want to win on my own merits,” I can totally understand that perspective, and I’d assure you that we spent quite a bit of time in developing Eternal: Chronicles so that the basic units would guide and nudge strategies, particularly for new players, without having these paths be so powerful that advanced players couldn’t pivot away from them or be successful without following those strategic paths. I’ve had several games, for instance, where I started with Awakened Student, and did not opt into buying as many 4-strength units as I could find, because I saw better opportunities elsewhere.

In the next designer diary, we’ll look at skills and some interesting battle dynamics. There’s a lot going on in Eternal: Chronicles of the Throne, both in the long-term planning that goes into deciding which cards to buy, and also in the choices you make in the heat of combat.

We’ll see you at Gen Con!