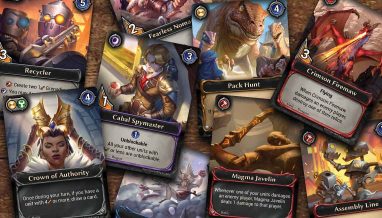 In this designer diary, we take a look at the high-level goals that helped steer the foundation of Eternal: Chronicles of the Throne.

At Dire Wolf Digital, we’re big fans of card games of all types. We also love making card games. Clank! was our first tabletop game and we’re quite proud of it. We’re just as proud of Eternal, our online collectible card battler.

Several years ago, I was struck by the idea to bring the fun of collectible card battlers over to the deckbuilding genre. After several experiments over the years that included some starts and stops, the project started chugging along once we focused our approach on building a tabletop deckbuilder based on our own Eternal online card battler. To be very clear, Chronicles of the Throne’s rules and cards are not direct translations of Eternal. But the spirit, themes, and many of the star characters of Eternal have been transported into Chronicles of the Throne.

There are three aspects of Eternal that were high priorities for us to “port” over to the deckbuilder format:

(2) A wide variety of strategies for players to pursue, and

In Eternal each player has a certain amount of health, and it’s the goal of the other player to whittle down their enemy’s health to zero while protecting their own. Players summon forces to fight, and the way these forces battle against each other creates a lot of tension and drama. It’s the basic structure used by a lot of great games, and for good reason – it provokes a ton of fun player decisions and interaction.

With Chronicles of the Throne, the players deploy units that can battle against one another, and we valued interaction so highly that we were willing to spend a good amount of our complexity budget on a core battle mechanic that presented players with interesting decisions. The easiest way to explain how battle works is with an example: 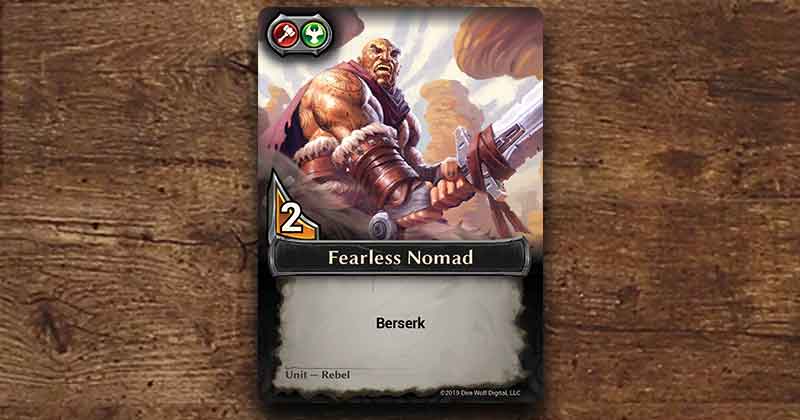 Fearless Nomad has a strength of 2, but his ability (Berserk) means that he deals double damage to players, so if he is not blocked (or destroyed by a spell), he will deal 4 damage to you! 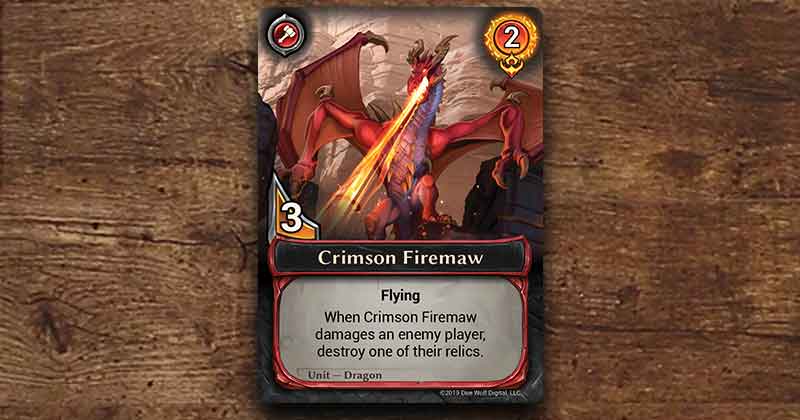 Crimson Firemaw’s strength is 3, which is high enough to block Fearless Nomad. (A unit can’t block a unit stronger than itself.) But in Chronicles of the Throne, whenever a unit blocks another unit, both cards are discarded.

The decision to use a unit to block presents an interesting choice for you. Take a look at Crimson Firemaw’s special abilities. Perhaps you acquired the Crimson Firemaw earlier because you wanted it to fly over and destroy a powerful relic that I bought early in the game. If you block the Fearless Nomad, you’ll give up the opportunity for Crimson Firemaw to do its thing.

But then again, that’s just an opportunity. Perhaps after you bought Crimson Firemaw, I bought some flying units to protect myself from your dragon! In that case, if you take the four damage from the Fearless Nomad and send the Crimson Firemaw to attack me, I might be able to block the Crimson Firemaw and deny you the value you were hoping for!

This showcases the types of interaction and interesting decisions we are aiming for with Chronicles of the Throne: you need to weigh your attacks  against how your opponent might retaliate…and how you will respond if they do.

The second key principle we wanted Chronicles of the Throne to share with its digital sibling is a wide variety of strategies to pursue. It was very important for us to offer synergistic combinations among the cards, such that the way you choose new cards to add to your deck is very contextual, based not only on what kind of threats your opponent is assembling (as in the battle example above) but which cards are going to work best based on the cards you’ve already acquired.

For example, say you play these two cards on the same turn: 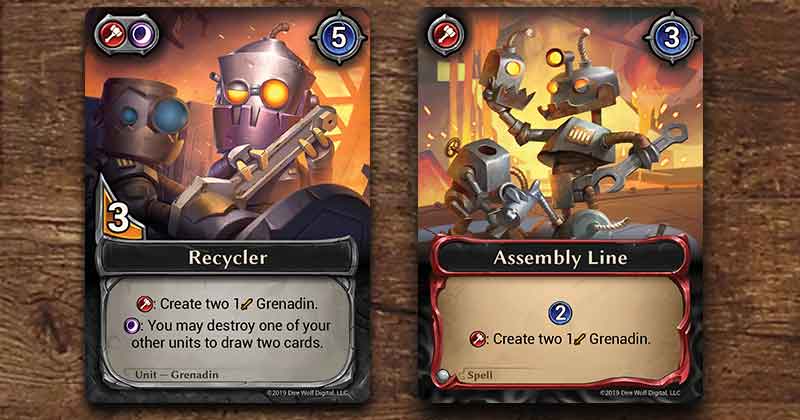 Both of these cards have abilities that trigger if you play another Fire card on the same turn.

In this case, because you do have another Fire card on the same turn (each card triggers the other), both Fire abilities take effect and you get to put four Grenadin tokens onto the battlefield. So your army would look like this: 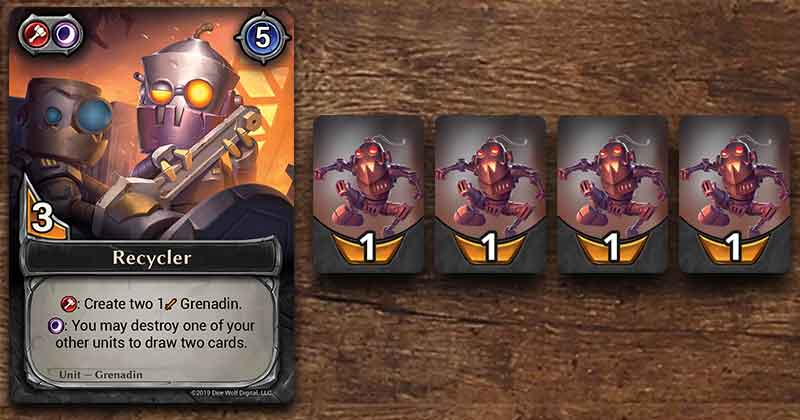 Making a bunch of units has its own benefits, but here’s the kicker: there are cards you can draft that will synergize with your deck better if you are using such a strategy. Take a look at Magma Javelin, for instance. 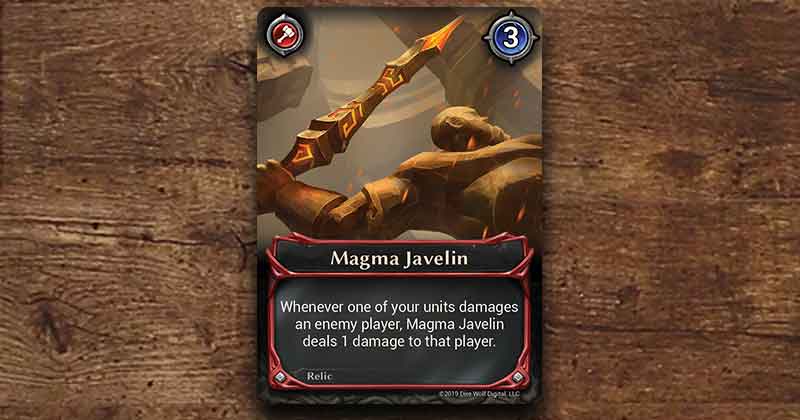 Of course, this token unit strategy (sometimes called a “go wide” strategy) is only one of many strategies and synergies that are contained in the game. Here are some other cards that can give your deck an identity and affect your card acquisition decisions: 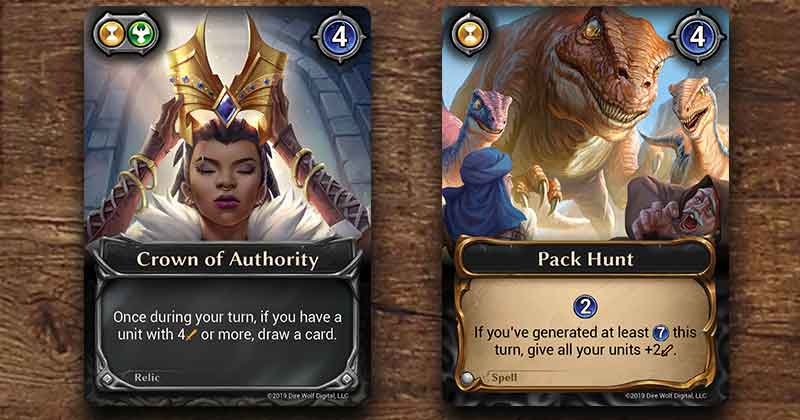 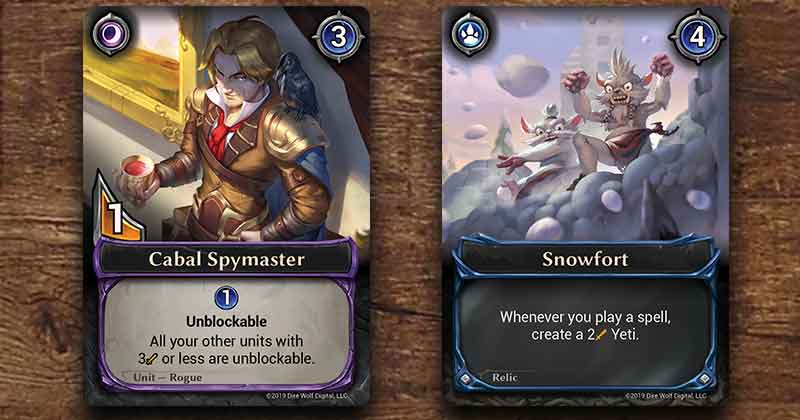 Finally, it was important to us that Chronicles of the Throne is highly replayable, off the shelf and out of the box. Offering a wide variety of strategies certainly helps with this goal, but the core combat system and the Warp mechanic (which we’ll get into in the next Designer Diary) both contribute significantly to replayability.

We also went to more extreme measures than most deckbuilders in terms of the quantity of unique cards in the Forge deck. Chronicles of the Throne’s Forge deck contains 100 cards total. 70 of these cards are unique and only 15 cards are duplicated (2 copies). This means that every game is going to present different combinations of cards to analyze and different strategies for you and your friends to pursue.

In the next Designer Diary, we’ll take a look at two unique mechanics that Eternal: Chronicles of the Throne brings to the deckbuilder genre: Warping cards and Eternal Throne abilities, so watch this space for more.

Pre-orders for Eternal: Chronicles of the Throne are now available, and the game will be available in Friendly Local Game Stores everywhere this August! See you at Gen Con!