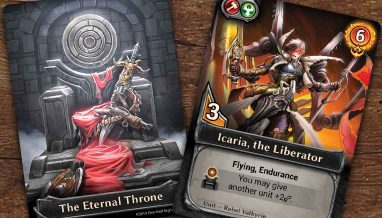 Chronicles of the Throne Designer Diary: Warping & the Eternal Throne

In the first designer diary entry, we went over the high level goals of Eternal: Chronicles of the Throne, and how we sought to achieve card battler gameplay in a tabletop deckbuilder inspired by Eternal.

In today’s designer diary, we dig down and unveil two key new mechanics that are unique to Eternal: Chronicles of the Throne.

One of Chronicles of the Throne’s unique mechanics is the concept of “warping” certain cards into play immediately. Only some cards have a Warp option, represented by alternate graphical treatment for their power cost. Let’s use an example. Suppose Jotun Punter appears in the Forge Row and you have 4 power available. Because he has the Warp ability, you can acquire him and warp him into play immediately. 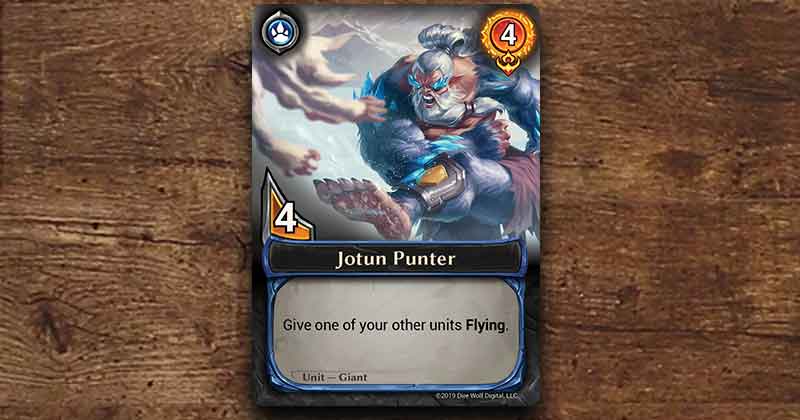 Flying is a mechanic that makes it harder for your units to be blocked (Flying units can only be blocked by other Flying units), so it might be in your best interest to warp in Jotun Punter. Imagine you have the Gorgon Fanatic in play. You’d be pretty interested in giving it the Flying ability because look at that payoff if your opponent can’t block! 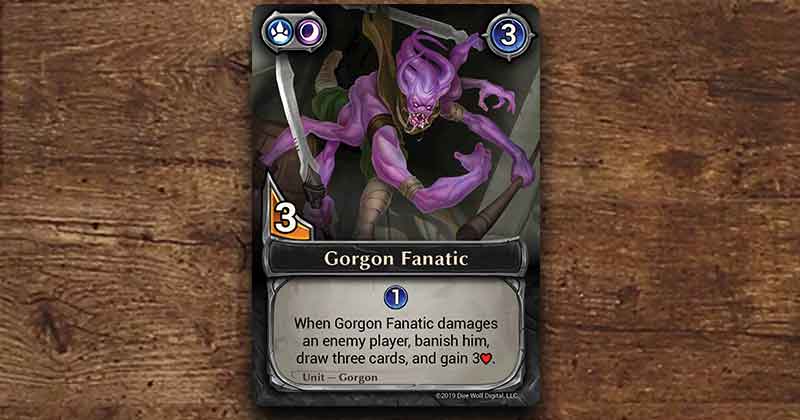 But here’s the rub: each player has a limited number of warps they can make. Sort of. At the start of the game, each player is given two Warp Tokens. Whenever you want to warp a card to play it immediately, you can turn over one of your Warp Tokens to its spent side. Which gives you a limit of two warps per game. Until… drum roll please… the Eternal Throne shows up, which leads us to Chronicles of the Throne’s next unique mechanic.

Here’s a card that every player gets in their starting deck: 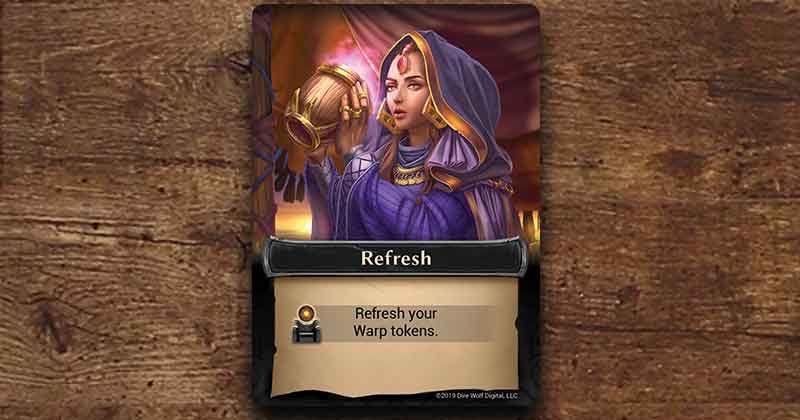 But how do you get to the Eternal Throne?

At the start of the game, you’ll place the Eternal Throne card in the center of the table. 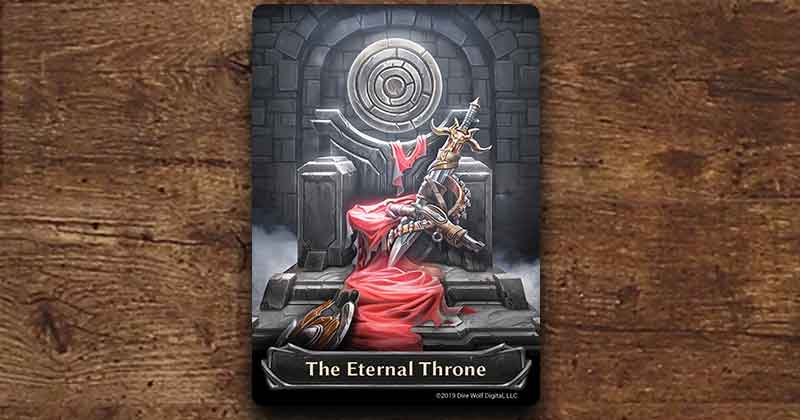 On top of the Eternal Throne you will place a stack of Seek Power cards. 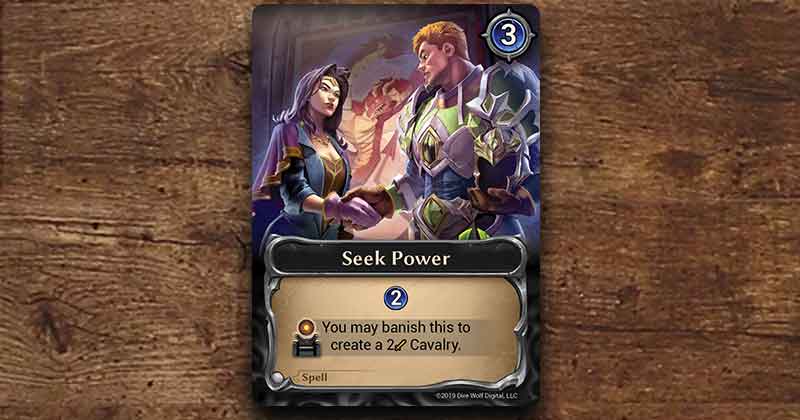 Players may buy Seek Powers from this stack until the Seek Powers run out, an event that serves as an important inflection point. The Eternal Throne is now exposed, and from now on, all cards with Throne abilities become active. And that’s true for all players. Which begs the question: if all players benefit from the Throne abilities, why should you buy a Seek Power? There’s not a simple answer to that question. Sometimes you don’t care one way or another; maybe it’s early game and Seek Power is the best card you can acquire. So the stack will naturally deplete because of turns like that. Sometimes you will have used both your Warp Tokens and other players haven’t, so you’d want to turn your Refresh on because yours is more impactful. But a more clear-cut situation occurs when one player acquires one or more cards from the supply row that have Throne abilities. Here are some examples: 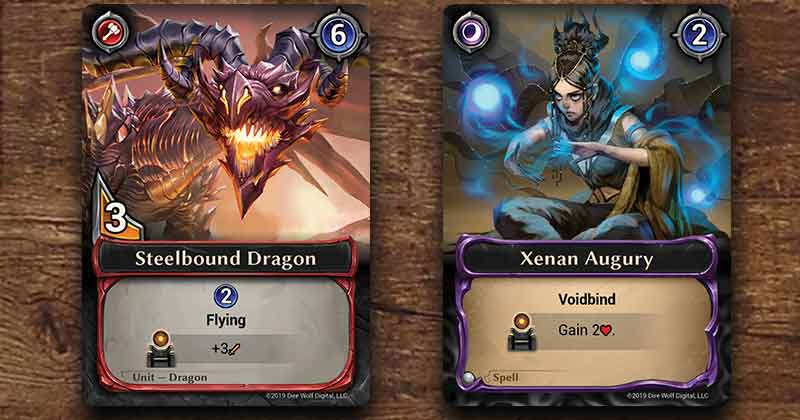 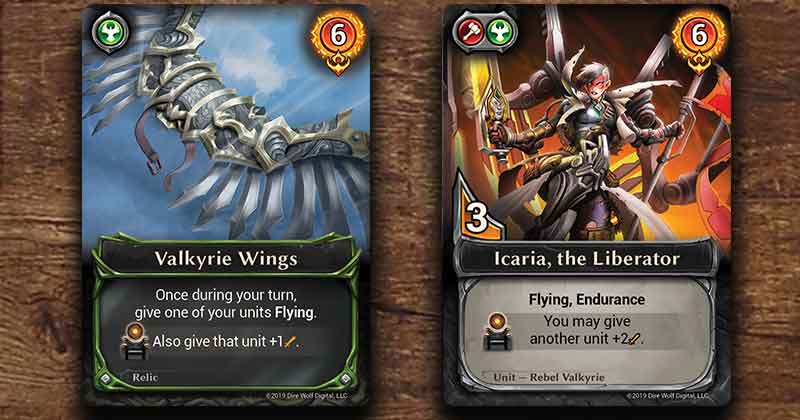 Once someone grabs one or more cards like this, they are immediately motivated to buy Seek Powers to reach the Throne and turn on their “super powers” while the other players are conversely dissuaded to do them the favor of helping. In fact, it’s often best to go on the offensive against a player who invests too heavily in late-game cards; better to take them out before their extra benefits can kick in!

There’s no single right answer, and each game will play out differently as players jockey for control of the Eternal Throne…and the power it provides.

In the next designer diary, we’ll take a look at starting decks and how each player’s starting deck is slightly different!