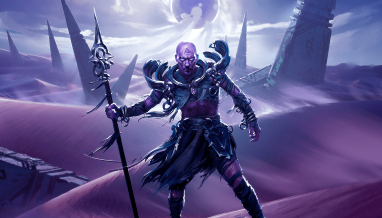 The draft format will consist of four packs, two packs of Dark Frontier, and two Eternal Draft Packs. The pack order will return to one we used for Defiance and Fall of Argenport.

We’re returning to a format with the newest set opened first to give players the best chance to sculpt their draft around Dark Frontier cards and themes.

With this release, our Draft Packs are getting an update. The packs contain a selection of cards from Eternal’s five major sets, The Empty Throne, Omens of the Past, The Dusk Road, The Fall of Argenport, and Defiance. Our goals when creating these draft packs is to supplement and enhance the new themes in Dark Frontier while providing an opportunity to open iconic cards from previous Eternal sets. If you’d like to see the full list of cards you will see in the Draft Packs you can click here.

We’re excited for you to explore the Dark Frontier draft format and look forward to seeing you in the queue.