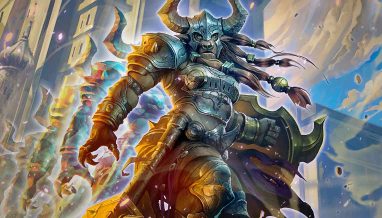 We’ve previously revealed the beginnings of the Onslaught from the Shadowlands, and seen how units are Twisting themselves into new shapes and skills. Now, let’s take a look at the third major new mechanic of Dark Frontier, and the converging possibilities held within Shift. 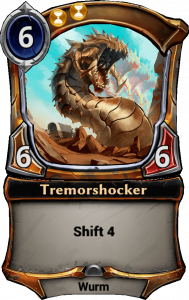 The Strangers who marched on Argenport declared that the world is not as we have always believed it to be: Reality blurs as you approach its edge, and twisting Shadowlands paths lead through the veil that separates “what is” from “what is not”. Horus Traver was the first pioneer of this new understanding: one man who was many men, both here and elsewhere, growing ever stronger as the countless possibilities of different lives converged into one.

…and now, it is spreading. With Shift, we see the ripple effect of more and more creatures being pulled from one reality into another:

Those glowing inscriptions on the unit represent how long before it Emerges, the leftmost has three turns to go, while the one on the right is ready to burst out and smack for six Unblockable damage the next turn.

How do we Shift a unit into play? Well, if you only have the power to pay the Shift cost, you play it like any other unit. You drag the unit out from your hand and it plays Shifted. Easy.

Now, let’s say you have the power to pay either the Shift cost or the regular cost. Shifting it is optional so you have a choice. When you drag the unit into play, the unit will snap to the middle of the playmat while you see this.

If you drag the unit to the “Play” side on the left, the unit will play as normal and be ready to battle immediately. If you drag it to the swirling purple “Play Shifted” side to the right, it will play Shifted, beginning its journey through the Shadowlands.

Shift costs aren’t always less than the regular cost. Let’s take a look at one who costs more to Shift: 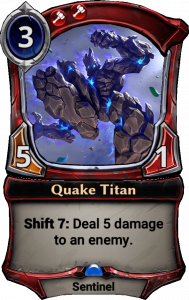 Quake Titan will cost you more power to Shift but rewards you with an extra bonus immediately when you Shift it, dealing five damage to an enemy.

Shifted units are well-protected while they prepare to enter our world. While Shifted, players cannot select them with any card. You can’t play weapons or spells directly on them. And your opponent? They can’t Deathstrike one of your Shifted units or attack it with a relic weapon.

But these units are not completely immune. Any card or effect that would affect them without clicking on them like Harsh Rule or Hailstorm still works.

While Shifted units prepare to Emerge, they can still affect our world. If any Shifted cards have abilities, they’ll still work while your unit is Shifted. Our newest Paladin, Xulta Loyalist gives an immediate boost to your attacks while she Shifts. 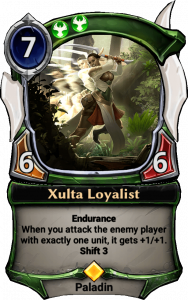 Shift gives more control to players on how they deploy their units. Each Shift decision is different and magnifies those before it. Every point of damage you get in early matters more as unblockable attacks from Shift can finish them off.

And shifting isn’t just limited to units from Dark Frontier. 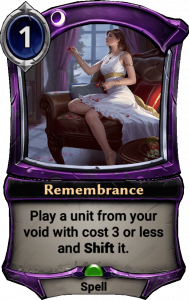 Remembrance allows you to bring back a unit from the void Shifted. While you can’t attack with it right away, you immediately get that unit’s summon ability, like say one of the new Smugglers.

Lastly, Rost the Walking Glacier requires an intense devotion to Primal, but packs a huge punch for a 5-drop. 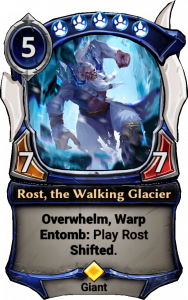 How can your opponent ever deal with a Rost? Chump-blocking doesn’t do much against his Overwhelm. If they try to kill it, Rost replays himself immediately Shifted and will be back to punching soon enough.

These units are emerging soon – how do you think the metagame will shift when Dark Frontier releases on Thursday?