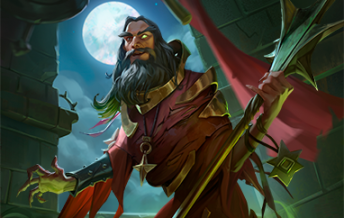 A new hero emerges offering promises of great strength and power. Why would we not put trust in Star-Reader Severin and his prophecies? For our enemies, Severin poses a threat that can’t be stopped if we’re willing to pay his price. All he asks is a deep commitment to Shadow and a Relic. Let’s take a look at some decks to unlock the stars.

If you’re a shadow deck that wants Relics, there’s no better place to start the game than with a Rat Cage. Once we’ve emptied the Rat Cage, we can dispose of it to Lethrai Lobotomy or Consuming Greed for more value. Secret Passage is another nifty cheap Relic. It gives our giant Severins or Ravenous Thornbeasts unblockable. Even better when you use the second ability on the Passage to give Severin unblockable, that ability is permanently added. When Severin comes back in the future, he’ll be even stronger and still unblockable.

Now, if this first deck is a resilient way to keep attacking, let’s look at something going a little deeper…

The core of this deck is the combo of two relics, Shepherd's Horn and Porcelain Mark. The Mask makes all your units have Overwhelm and the Horn gains you 3 health each time you play one. Ephemeral Whisp, Rat Cage, and Star-Reader Severin are all good ways to put units into play turn after turn after turn gaining you massive amounts of health. We have three copies of each in our deck with another copy in the market for our Auralian Merchant to fetch the missing piece. Once we’re fully comboing off a Katra or Mask of Torment from the Market will push us over the finish line.

Severin has a really nice combo with Infinite Hourglass. Endurance means when Severin returns exhausted, he’ll ready on the enemy turn giving you a giant blocker that keeps coming back.

The real challenge is having the influence for Pompous Historian or Teacher of Humility and five-shadow for Severin. Here, we have 12 power cards that make both time and shadow influence as well as Token of Knowledge for more flexibility. Be Gone and Trail Maker are other options for hitting that fifth shadow influence.

Severin is available for free with your first win of the day for just a limited time, and there’s so much to explore in each faction. How about Fire Relics that sacrifice like Combustion Cell or Bloodrite Kalis? Or Primal Relics that can discard Severin for value like Pitfall Trap? The answers are in the stars, better get reading.