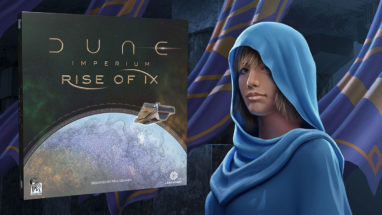 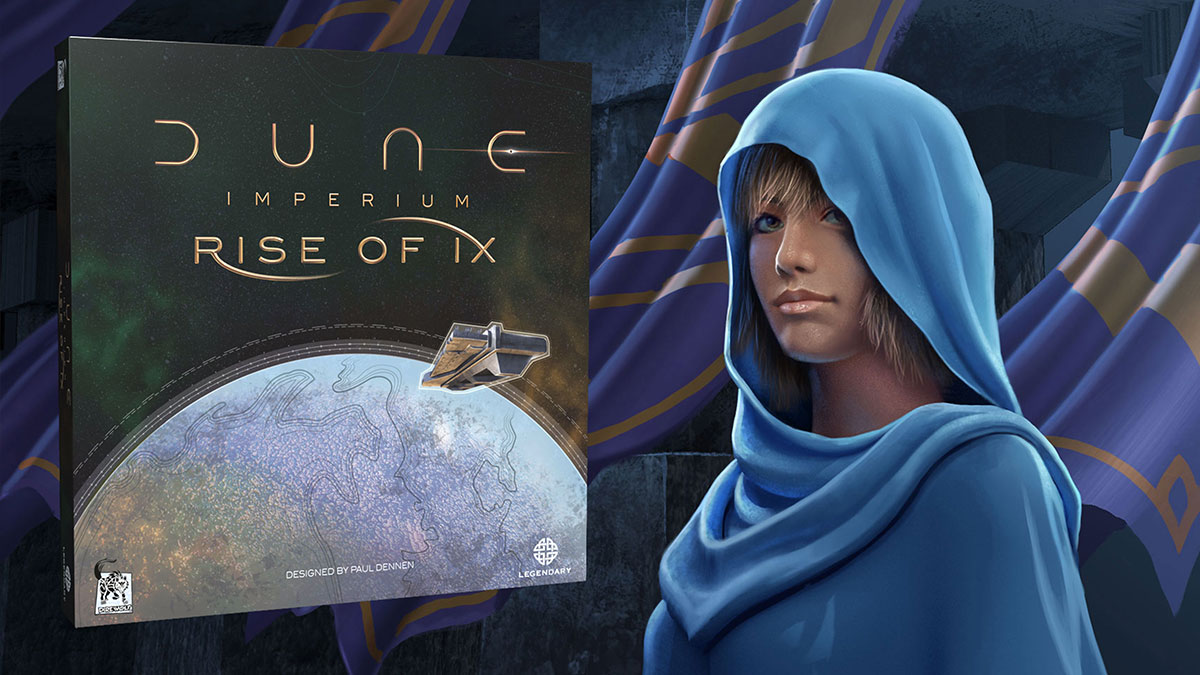 We’ve been thrilled at the reception to Dune: Imperium and can’t wait for players to experience even more of it with its first expansion, due to hit stores later this year. The expansion is called Rise of Ix and features the famed Ixian technology from the Dune books.

Planet Ix (originally named such because it was the ninth planet in its system) is known for its machine culture. The Ixians create machines that are greatly desired across the Imperium, but these machines are so advanced that they push at the boundary of not making – “a machine in the likeness of a human mind”  The theme of machines was a particularly nice fit for some of the gameplay ideas that I’d been tinkering with as the game went through development and beyond.

There were a couple big things I wanted to do with this expansion that are sort of entwined. First, offer players more interesting ways to spend their spice. Second, offer players an increased number of strategic paths to pursue. The result of these goals ultimately manifested as Ixian tech tiles. Each of these tech tiles costs spice to buy and sits in front of you for the rest of the game.

Some of tiles will synergize with a particular type of card or deck-building strategy. Some offer rewards for pursuing politics, while others have a strong military bent. And some offer general benefits that can fit into most strategies. Here are some examples:

Tech tiles aren’t the only thing Ix has on offer for nobles pursuing victory on Arrakis. They also sell war machines – dreadnoughts – to any House with enough Solari to make a deal.

Dreadnoughts are similar to troops, but they’re much more powerful. Each house can build up to two dreadnoughts throughout the game and they’ll typically reside in garrisons with your other troops.

Dreadnoughts are stronger than troops, contributing 3 strength compared to a troop’s 2 strength. But dreadnoughts can also take control of locations on Arrakis. Whenever you win a conflict that involves one of your dreadnoughts, you’ll send that dreadnought to take over a board space for one round. This can allow you to cover up and supersede another player’s control marker.

It’s worth a brief discussion about the challenge inherent in expanding a worker placement game. As Dune: Imperium players across the world have reported, a lot of the fun of the game comes from the tension involved in where and when to send your agents to the board. If an expansion simply introduces new board spaces for the players to send their agents, much of that desirable tension in the agent-dispatching section of the game could deflate.

Because of this issue, our approach for Dune: Imperium was to keep the number of spaces the same as in the original game. To do that, we both introduce new spaces and remove some old spaces, in equal measure. And, with Dune: Imperium, there is also board space icon balance to consider. We didn’t want to disrupt the established balance of icons on the board, so for every board space we removed, we added a new space that used the same icon. And in many ways, the new spaces fulfill some of the same player needs as the old spaces. But with a twist.

As to how – from a practical perspective – we add and remove spaces from a physical board game, the answer is simply that the expansion comes with two new boards. One of these new boards – the Landsraad/CHOAM board – sits on top of the upper part of the original board. The other new board – the Ix board – sits off to the side. 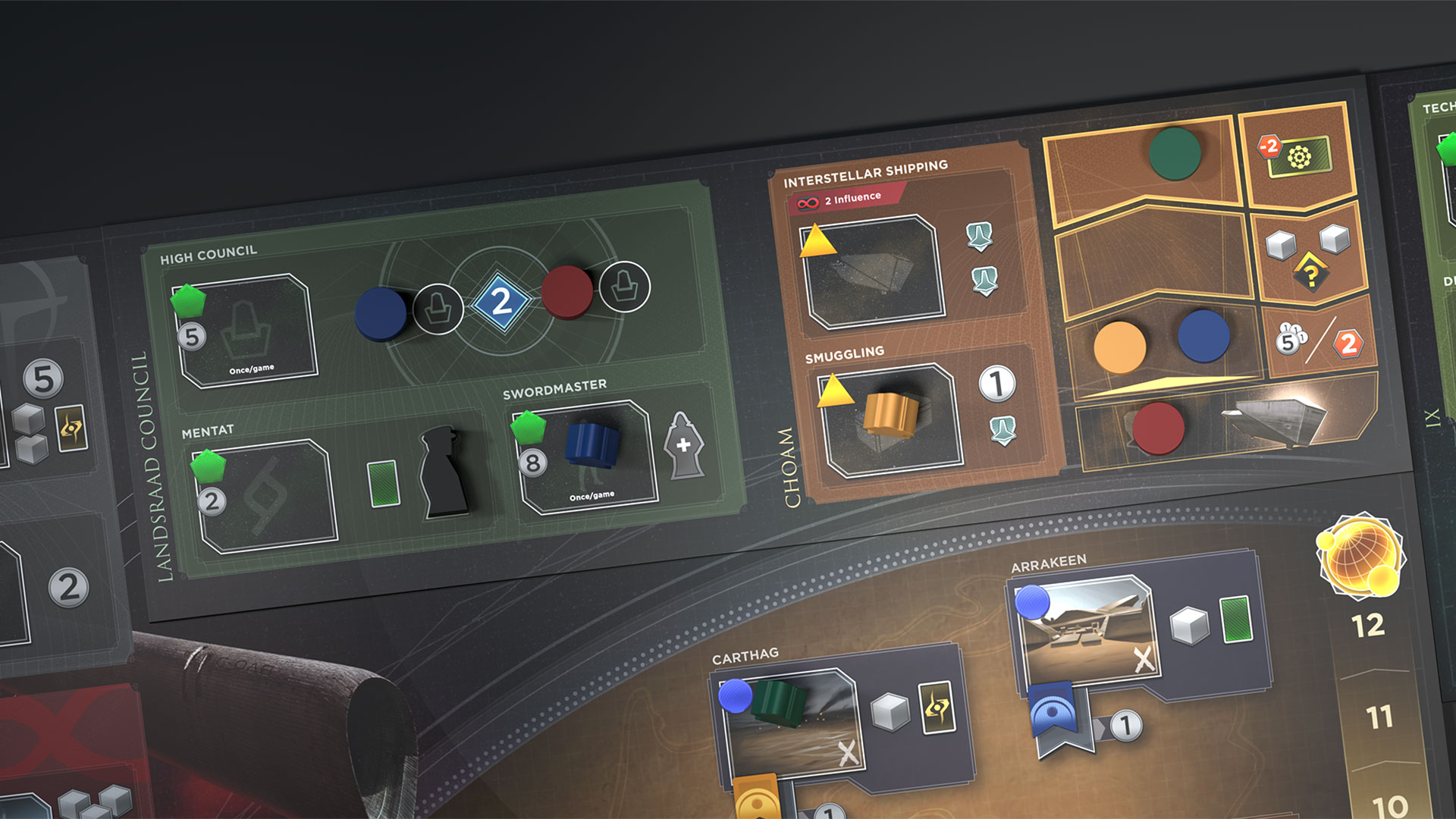 Let’s walk through the four space swaps and look at some of the design issues that were involved:

Hall of Oratory is an interesting space that allows a player to flip-flop a Dagger from a card that would provide no persuasion on reveal to providing some persuasion by visiting the Hall. Tech Negotiations serves this same purpose, but also allows the player to buy a tech tile – at a discount – from the Ixians.

This is an interesting swap, because on a superficial level, both spaces serve the same high-level goal for a player: spend some solari to increase military strength. But one of the goals of the Dreadnought space was to not only preserve this goal, but to offer a third good early-game expenditure of Solari. We aimed to make a Dreadnought purchase a reasonable purchase in all portions of the game – early, mid, or late. And a player with spice on hand can also buy a tech tile, so planning ahead can be very important here.

An important design goal for this expansion was to provide more choices around resource conversion and resource expenditures. These board space replacements are the key to fulfilling both of these goals. First, by removing Sell Melange and Secure Contracts, there are now fewer “simple” ways to earn Solari, and the old method of selling spice to earn Solari is simply removed from the game.

By removing Sell Melange, the expanded game essentially offers players a different set of interesting decisions about how to spend their spice. You can’t simply convert spice into Solari, so what will you use your spice for? The base game board offered a few key opportunities to spend spice, all within the faction areas. With the expansion, those opportunities remain, but the Ix are now seeking buyers for their impressive technology. And, as discussed above, the cost to buy this tech…is spice.

As you’ve no doubt already surmised from some of the board space changes noted above, the CHOAM section of the board also gets an overhaul in this expansion. The new CHOAM features board spaces that allow players to interact with the new Shipping Track that resides there. So, how does this shipping track work?

The new CHOAM track really changes up the way players will interact with the game’s economy.  There’s also a new thematic tie to the Spacing Guild. Once a player is in good standing with the Guild, they have access to the powerful Interstellar Shipping space.

There’s a lot more to explore with the Rise of Ix expansion. We’ll cover more when we return with the next design diary, which will likely be given an entirely predictable title such as “What’s New in Rise of Ix? Part 2.” Stay tuned!