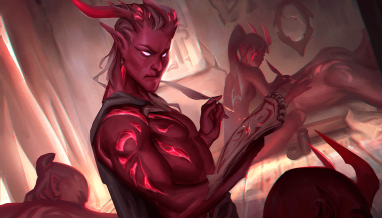 Draft and the Eternal World Championship

12/3 Update: Last month exposed a loophole in the high-ranked Draft Leaderboard logic that unfortunately incentivized a small number of players at the top of Master to “camp” on their rating and avoid playing games. While the results from November are valid and reflective of the Draft Championship Points awarded, we never want players to feel like they’ll be punished for playing Eternal. To that end, we’re making a small adjustment to how the Draft Leaderboard treats wins and losses by Master players to better reflect ratings changes among top Master players based on ongoing wins and losses.

The 2020 Eternal® World Championship season gets underway next weekend with ECQ: The Time of Ancestors. Join the fray as the best decks in the new Expedition format duke it out for a spot in the World Championship and a $3,000 prize pool!

But many roads lead to the World Championship; today we’re looking at how Draft success can also earn you a seat at the main event, starting…now!

Beginning this month, players earn Draft Championship Points (DCP) based upon their final standings on the Draft Leaderboard.

­­­­­­­­­­­­­­­­­­­­While achieving Master status in Draft will get you a shot at the Eternal Draft Championship, only the strongest, most consistent drafters will earn a coveted day one bye. So pick your cards wisely!

Stay tuned for more ways to qualify, and get ready for ECQ: The Time of Ancestors next Friday!