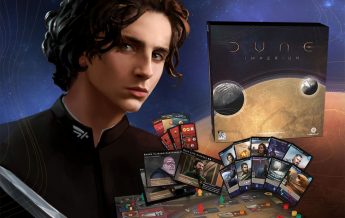 A beginning is the time for taking the most delicate care that the balances are correct.
– Frank Herbert, Dune

At Gen Con 2018, in the course of geeking out over a mutual fandom, we began increasingly “real” conversations about a longtime dream of ours: making a deck-building game based on Dune. Creative fires were burning bright, but there was one problem: There was already a much loved Dune board game, released in 1979 and recently updated by Gale Force Nine. The challenge for us was then to make a great game that didn’t feel redundant with that fan favorite. But we at Dire Wolf have learned a ton from making Clank! over the last few years, and were excited to dive into an entirely new take on a deck-building board game inside of Frank Herbert’s iconic universe.

The classic Dune game is at its best at high player counts of five or six, so we began with a focus on a game that excelled with smaller groups. Inspired by the complex dynamics of the Dune universe, I established a political structure for the game that would allow for a full breadth of Dune politics to appear in every game, even if played with as few as two players. The approach here was to take four of the major players in the Duniverse and situate them in the game as non-player factions. So, the Emperor, the Spacing Guild, the Bene Gesserit, and the Fremen would be in each game, and players could politically maneuver with whichever factions they wanted.

The earliest version of the game was more of a pure deck-builder than the full board game Dune: Imperium became over time, and had only a very small board element. Players would grab influence tokens during the game, each of which represented political currency with that faction but also could be used to activate that group’s special ability. Of course, Dune is complex so there was more gameplay than political maneuvers: players would also attempt to harvest spice and defend against attacks launched by other players. At the end of the game, players would score points for a variety of things, including how much spice and CHOAM shares they’d amassed as well as a number of points based on how well they were positioned in the political arena.

It was a good game. But, as big fans of Dune, we couldn’t shake the feeling that we could do better. Good wasn’t good enough. So, we went back to the drawing board. Like we did with Clank!, I wanted this game to push at the boundaries of what it means to be a deck-building game. I then spent about a week refreshing and reflecting, and trying to deal with the tension of two competing notions: first, I wanted to add more board to the game, to explore something more innovative than just a pure deck-building experience, and two, I didn’t want the game to be too similar to the Gale Force Nine Dune board game experience. That’s when I decided to explore a game experience of larger scope. One that would include the conflict on Arrakis (the planet lovingly known as Dune), but also represent facets of the larger Imperium.

I saw worker placement as being a natural fit for a Dune game, because good worker placement games involve careful planning and predicting what your opponents are up to, both of which feel very much appropriate within the scheme-filled books of Dune. So, how to do both a deck builder and a worker placement game? The answer seems almost obvious in retrospect: your cards allow you to place your workers. With this approach, the game’s Agent and round systems were simultaneously born. Let’s go through how it works. Here are a few cards you’ll find in a starting deck of Dune: Imperium.

At the bottom of each card are two sections: the Agent section above and the Reveal section below. When it’s your turn, you may play one of your cards to send an Agent (our term for worker) to a space on the board that corresponds to the Agent icon on the card you play.

As a departure from the deck-building standard in which a player typically plays their entire hand of cards and then redraws their next hand at the end of their turn, in Dune: Imperium all players draw their hands at the same time and players take bite-sized turns in alternation. Each player plays one card to send an Agent to the board, then it’s the next player’s turn, and so on.

Because you draw five cards but only start the game with two Agents, it won’t be long until it becomes your turn and you don’t have an Agent to send. That’s when it’s time to take a Reveal turn. You’ll reveal the remainder of your hand of cards and use the bottom Reveal section on the card. The Reveal section of a card typically provides you with resources, such as persuasion (the blue diamonds) that lets you acquire more cards for your deck. Some cards, such as Convincing Argument in your starting deck, don’t even have an Agent section; you can only use them during your Reveal turn.

One interesting feature of Dune: Imperium’s melding of deckbuilding with worker placement is that the system tones down the potentially snowballing power level of obtaining an additional Agent. Because you must use a card in your hand to send an Agent to a space on the board, doing so means that you’ll have one fewer card to generate resources during your Reveal turn. We found this to be a refreshing change from many worker placement games in which obtaining an additional worker provides a big advantage over your opponents.

One of the goals of Dune: Imperium is to be an immersive experience that resonates with the world of Dune. While the quartet of political factions exists as part of the world in each game, who then are the players? The clear choice for us was to put the players in the positions of leadership within the Great Houses of the Landsraad – the collection of rival noble families who rule the Imperium under the auspices of the Emperor.

So, the players then are leaders of Great Houses and on roughly equal footing to their rivals. Each player’s goal is to outmaneuver their opponents in the political arena while also attempting to seize control of the spice trade on the contested world of Arrakis. Each player assumes the role of a different leader, each with their own special abilities; this provides a good dose of asymmetric gameplay. There are four Houses in the game and we provide two leaders per House.

Let’s take a look at the two leaders for House Atreides, the most famous of all the Great Houses, and heart of the story of Dune. 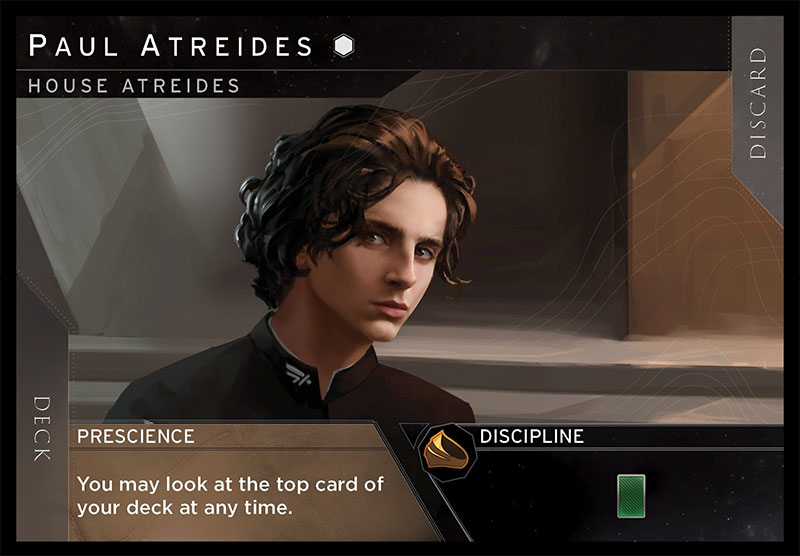 Paul Atreides, played by Timothée Chalomet in the upcoming film, has two abilities. One of them is an ongoing ability. Gifted with prescience, the ability to see the future, Paul may always look at the top card of his deck. The other ability, Discipline, is his signet ability. Leaders may use their signet ability only when they play the Signet Ring card in their starting deck.

Unlike the other cards we’ve shown, the Signet Ring has more than one icon. What this means is that when you use it to take an Agent turn, you have more flexibility. You can choose to send your Agent to a space matching any of its three icons. 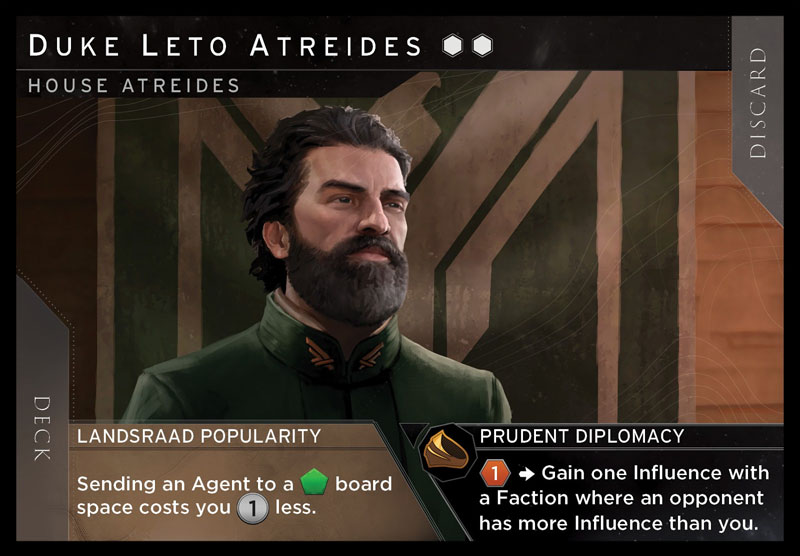 Duke Leto, Paul’s father, is the second Atreides leader. Portrayed by Oscar Isaac in the film, the Duke’s abilities reflect his abundance of charm. We see a hint of the meaning of the pentagon Agent icon here, as indicated by the Duke’s Landsraad Popularity ability. We also get a glimpse of two of the game’s three currencies: Solari (the silver coin) and spice (the orange hexagon).

This is just a first look at some of the deep strategy and innovative gameplay coming later this year in Dune: Imperium. We’ll be mining the sands for more spicy details in the coming weeks, so be sure to subscribe to the Dire Wolf newsletter for next time, when we explore the game board, the rules surrounding politics, and the game’s economic system and resources.