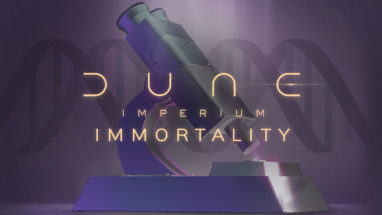 Hello Dune: Imperium fans! I’m Paul Dennen, here with the first of several previews showcasing what’s in store in the upcoming Immortality Expansion and some design backstory on how we got there.

In contrast to the Rise of Ix expansion for Dune: Imperium, which began in the summer of 2020, I didn’t begin design on Immortality until after the base game was already out. Having the opportunity to see people’s reactions to the game, provided some inspiration about what to include in the design. With Immortality, the focus was (at least partially) less of a guess about what would be exciting and more of a response to feedback from gamers around the world. And if there was one element of the game that many players seemed to want more from, it was deck-building. 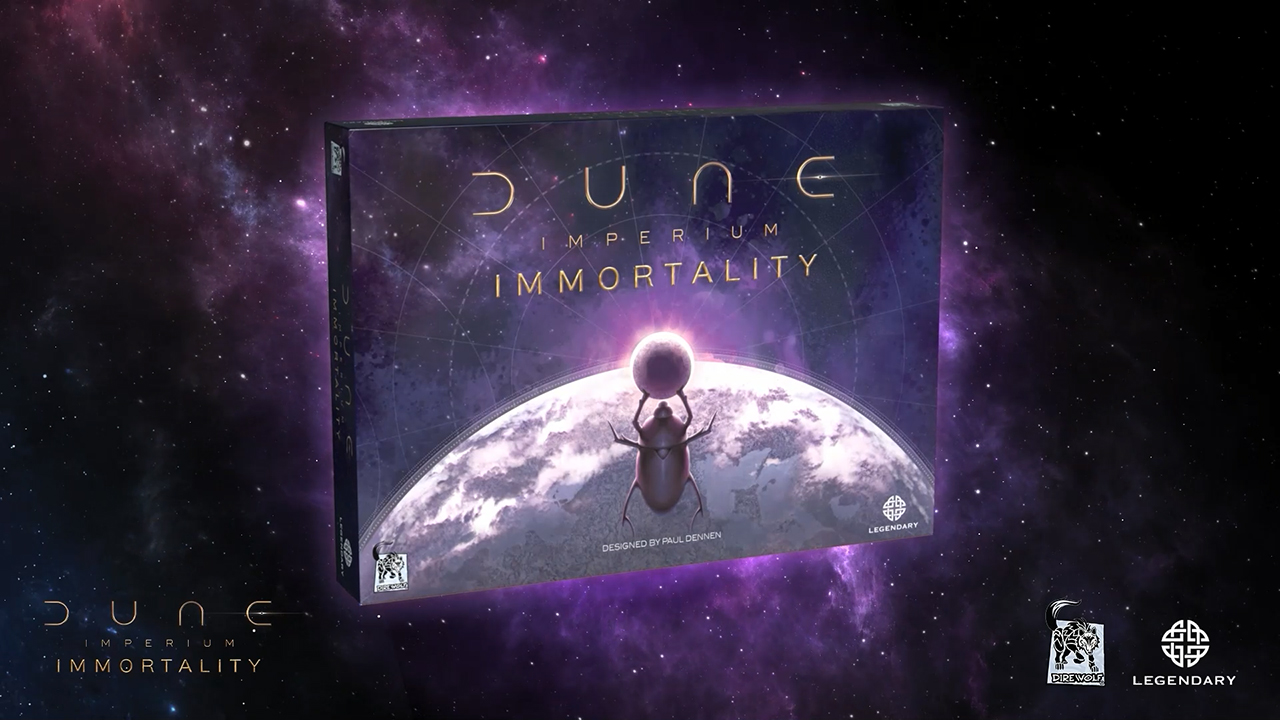 This wasn’t that surprising – Dune: Imperium is an unapologetically hybrid game that enmeshes several gameplay elements, so of course it isn’t about any one element as much as a pure game in that genre would be. As a starting point for comparison, each player in a typical deck-building game may take at least a dozen turns. Translated into Dune: Imperium terms, that would be 12+ rounds of play. This would be a far too long game for what we wanted itto be, which was a roughly 70-110 minute game depending on player count, with the sweet spot being 8 or 9 rounds of play.

Despite the planned game length and limited number of rounds, there are several aspects of the design that intentionally give players a boost to their deck-building efforts. There are built-in opportunities to trash cards: one starter card trashes itself, and there is one board space that can be visited to trash a card. In addition, card draw is relatively common in the game, with several board spaces – Arrakeen, Mentat, Research Station, and Selective Breeding – available to allow players to cycle through their deck faster than normal. So, while there may be fewer rounds of play, each round can be very impactful, filled with interesting decisions and card play. I would argue that we came out of the gate with a good amount of deck-building when you consider all the things a player must learn and juggle within the game.

That said, there was room to expand the deck-building portion of the game, and an expansion is a perfect opportunity to do so, because players have already wrapped their heads around the baseline game systems and are actively looking for more “action” in the game. The challenge with Immortality was this: how to give players more deck-building action without elongating the game? While I won’t go into the gory details explaining various iterations of the expansion during its design phase, I will say it took a significant amount of experimentation with various systems, across several months of a design phase, followed by several more months of development and fine-tuning. In the end, the systems that worked out the best were what made it into the box. And there are several different systems that Immortality uses to provide a boost to deck-building in Dune: Imperium.

The most impactful of these new systems are Specimens and Tleilaxu cards. Specimens are a new type of resource that you may accumulate during the game, although they share the same physical components that represent troops. Specimens spawn in the Axolotl tanks area of the new Bene Tleilax board. From there, you may harvest these Specimens to lay claim to various Tleilaxu experiments represented by Tleilaxu cards. Immortality comes with a deck of 18 unique Tleilaxu cards that are shuffled and acquired separately from and in addition to Imperium cards. During a player’s Reveal Turn, they can spend persuasion to acquire Imperium cards (as normal), but they can also spend any of their accumulated specimens to grab one of the cards in the new Tleilaxu Row. Unlike persuasion – which is “use it or lose it” – if you don’t spend your specimens, they remain in the Axolotl tanks for use in future turns. 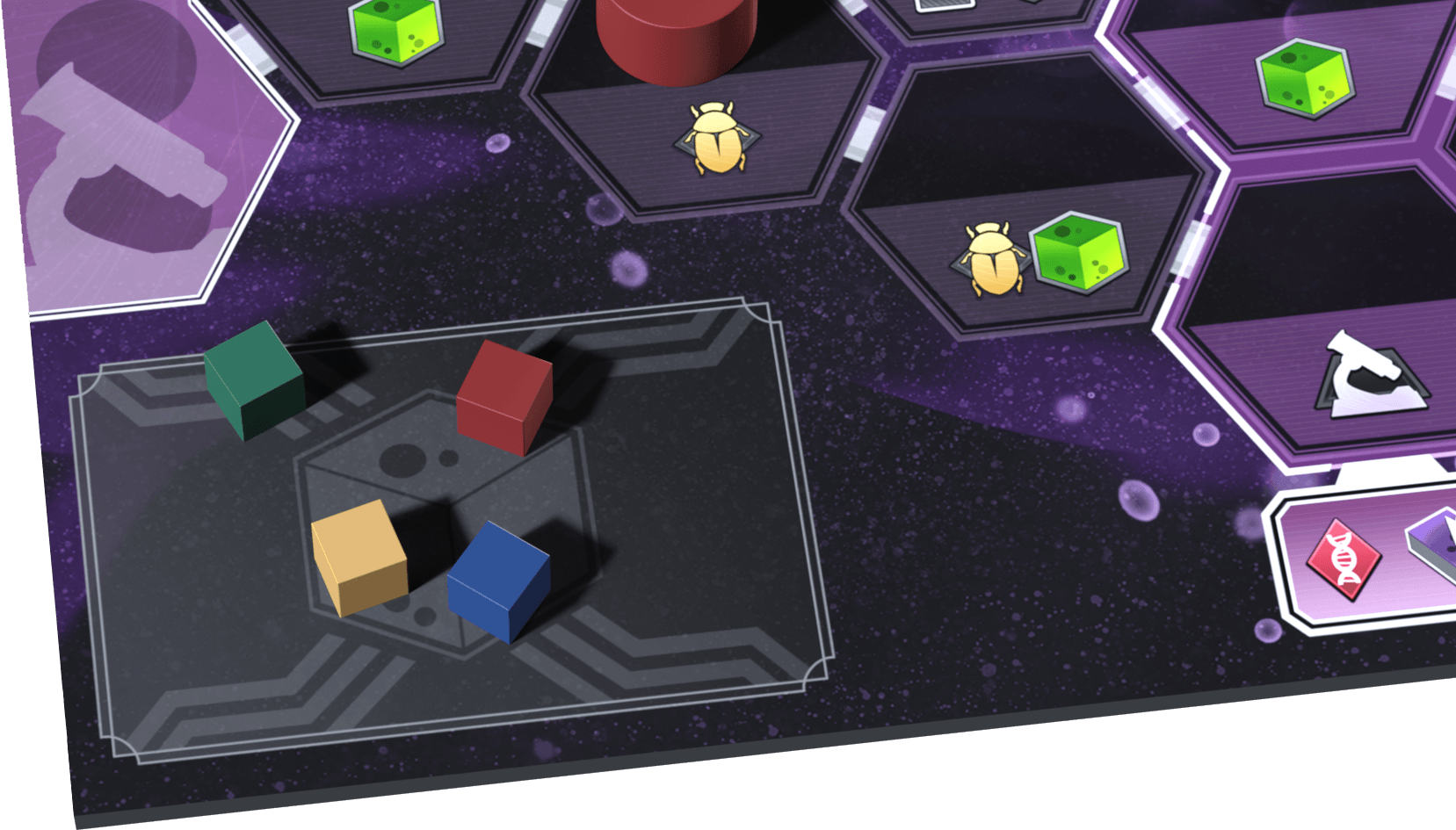 While you won’t be acquiring a Tleilaxu card every round, you will very likely buy some during the game, and these are additive to your deck-building compared to playing without Immortality, because acquiring specimens doesn’t take away from your ability to generate persuasion. In fact, after a variety of design experiments in which players would have to jump through some “Tleilaxu hoops” to accumulate specimens, we decided instead to give players cards in their starting decks that could do that right from the start. With some of those earlier design experiments, play-testers didn’t love the feeling that you could opt out of the expansion experience, and if we were going to impact deck-building in a significant way, it needed to start early in the game. 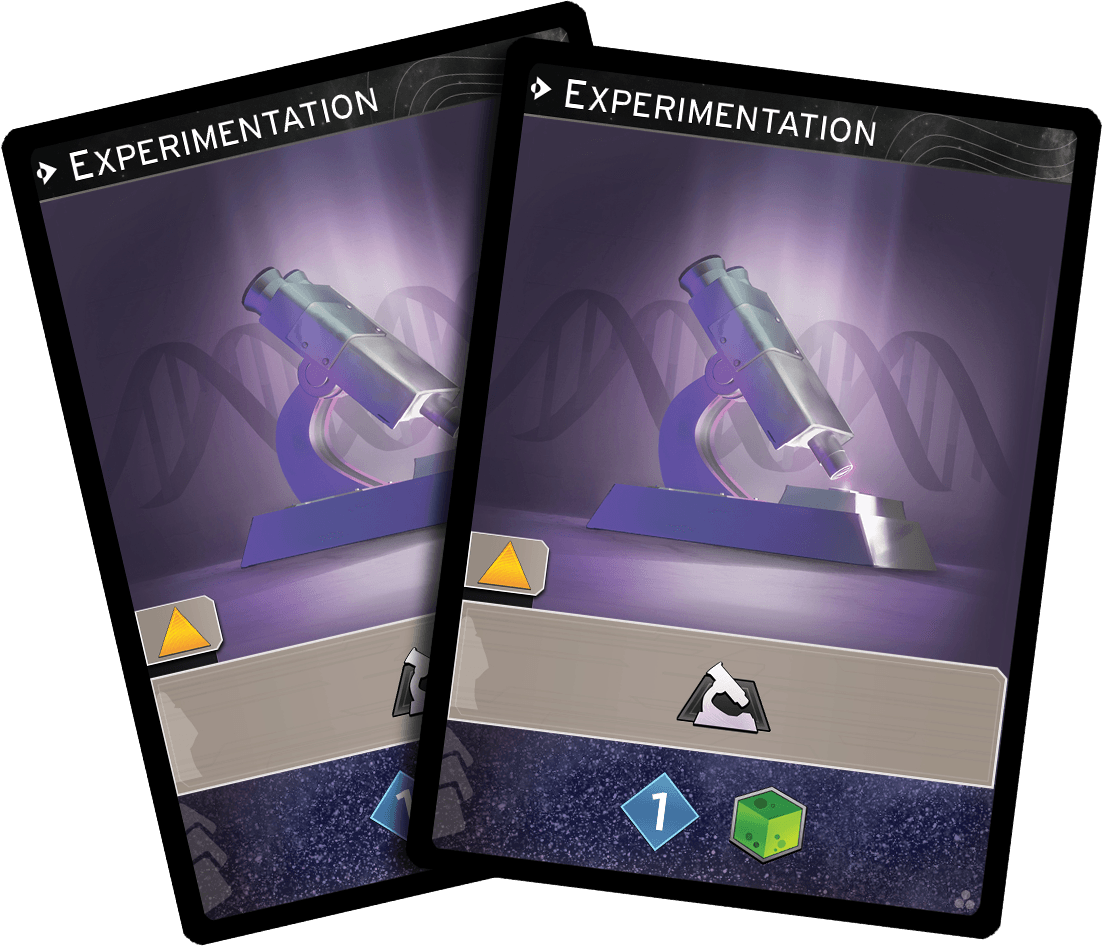 Note: For players who wonder how Immortality works when playing the Epic Game Mode from Rise of Ix, you do not replace any of the starting cards with Control the Spice. Instead, each player places their Control the Spice in their discard pile at the start of the game.

We’ll talk about the new Research icon in the Agent box of this card in the next designer diary, but that greenish cube in its Reveal box is the icon for adding a specimen to the Axolotl tanks. When you trigger such an icon, you simply move one of your troops from your supply into the Axolotl tanks to become a specimen. Then, as mentioned, you can spend those specimens to acquire Tleilaxu cards. The Tleilaxu deck is filled with a mix of bizarre Tleilaxu experiments and concepts that readers learn about in various Dune books, as well as a creature that was shown in Baron Harkonnen’s throne room in the 2021 film. 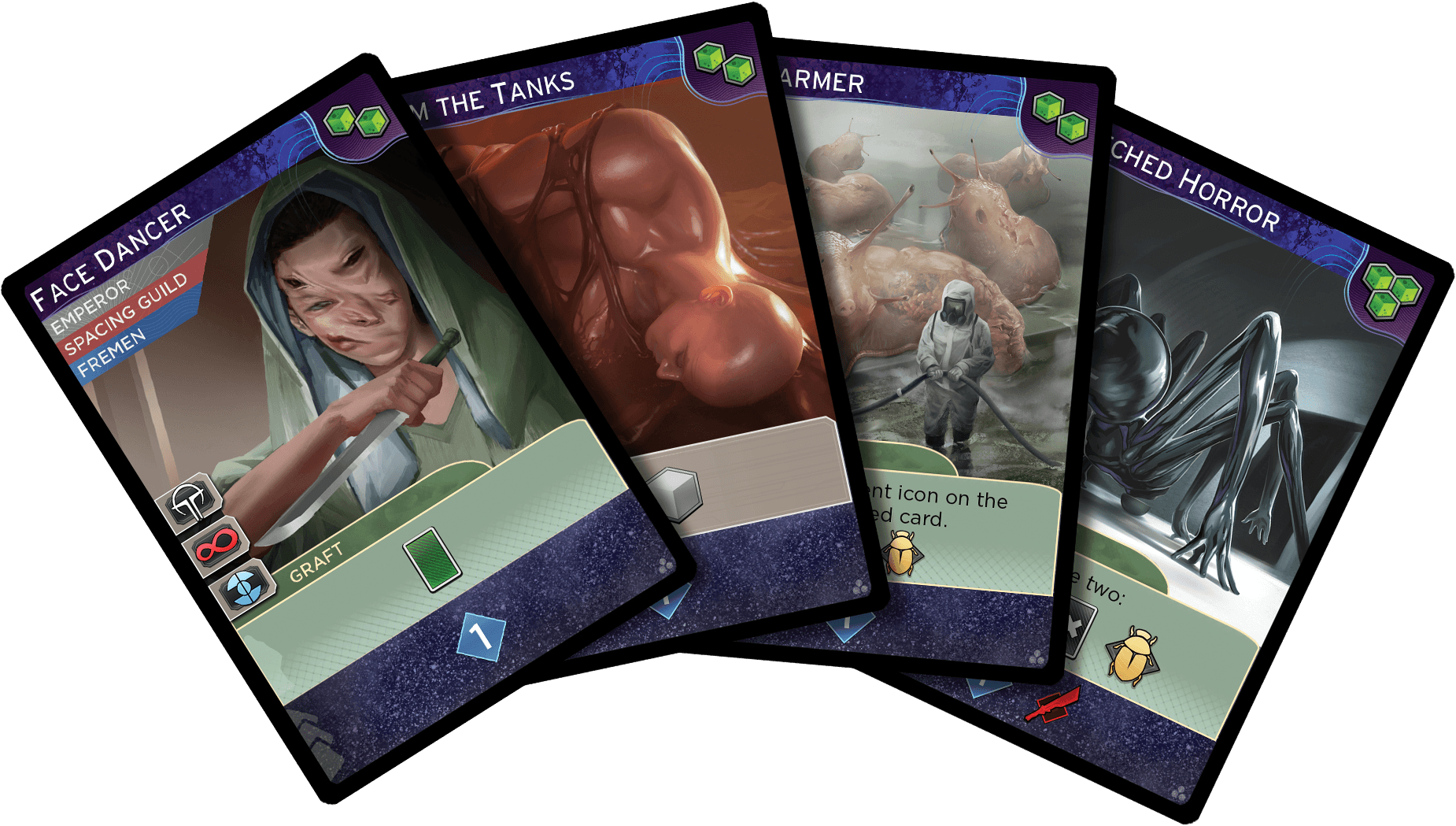 The Tleilaxu Row only contains three card choices. Two of these cards come from the Tleilaxu deck and a third card – Reclaimed Forces – is always available. Typically, we see play-testers choosing to acquire cards, but Reclaimed Forces is a solid late game option when you might just want to get more troops in your garrison, or if you need a nudge on the Tleilaxu track (we’ll talk about that in the next designer diary). 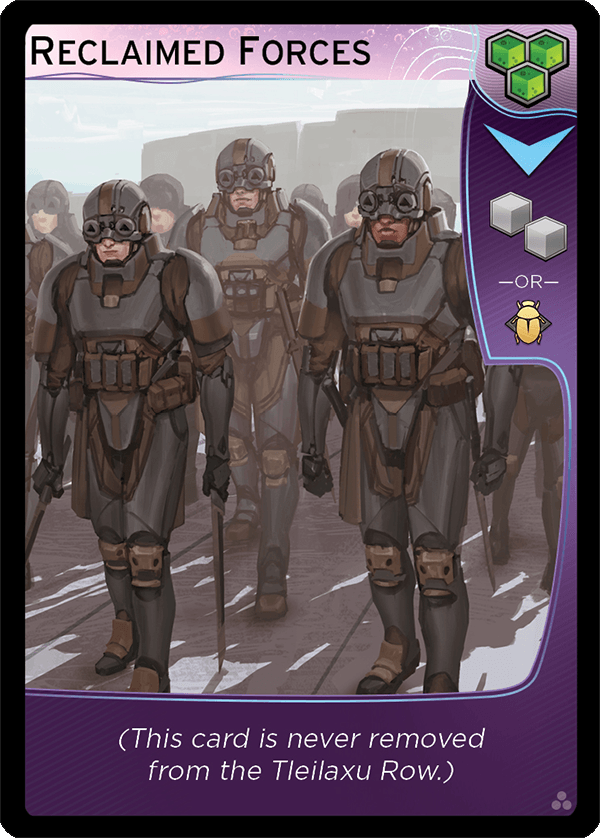 While Immortality is a smaller expansion than Rise of Ix (and has a lower MSRP), it does contain more cards than Rise of Ix had. In addition to the 18-card Tleilaxu deck, Reclaimed Forces, and Experimentation cards, Immortality comes with 30 new Imperium cards. Some of these cards can increase your specimen production capabilities, while a couple provide unusual outlets for spending your specimens. Organ Merchants is one such card. 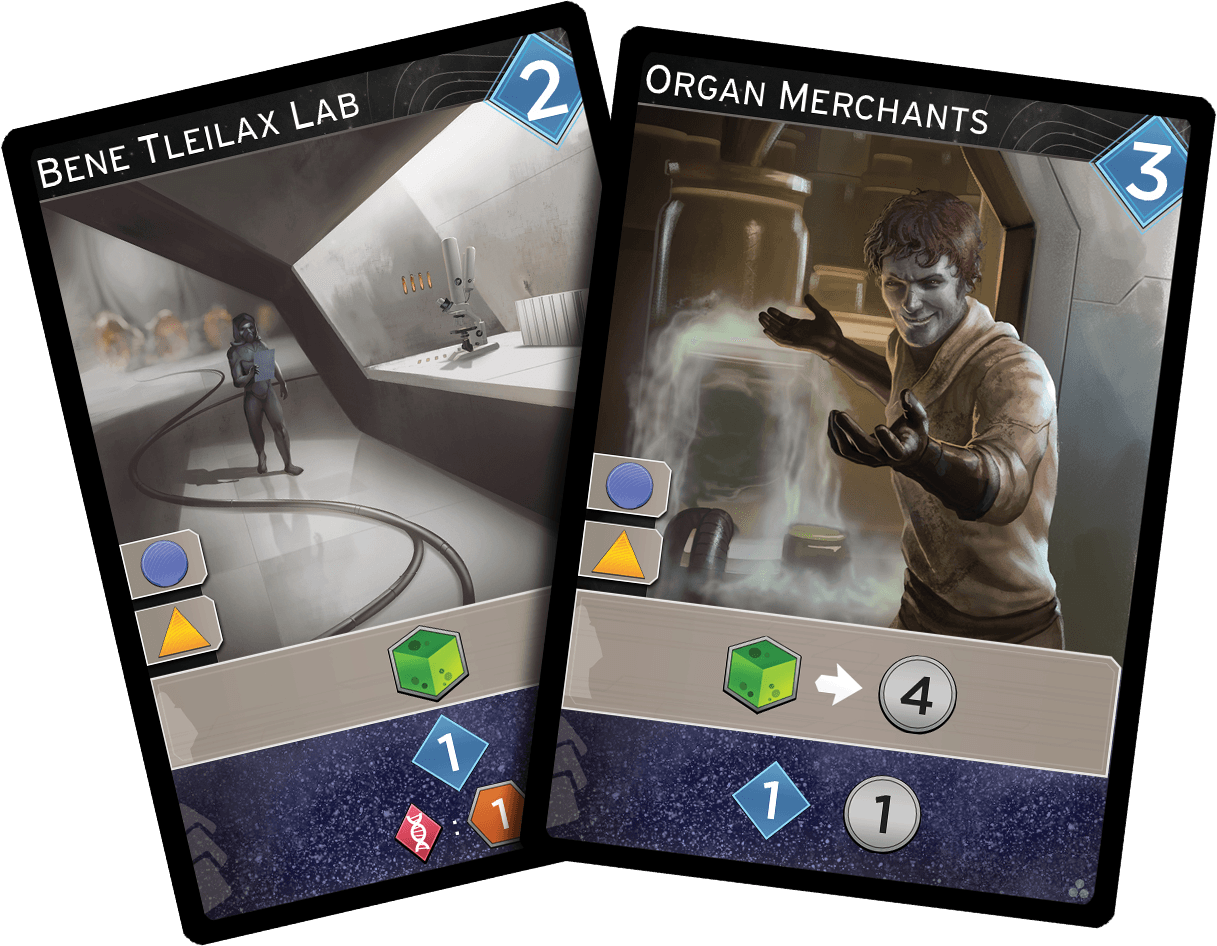 Next time, we’ll look at some other of the new abilities introduced by Immortality. But for now, I want to leave you with another new game component that also relates to deck-building. In the universe of Dune, atomic weapons do exist, but their use is extremely rare and generally prohibited. The Emperor has a stockpile, but the Houses of the Landsraad also maintain atomic arsenals, sometimes referred to as Family Atomics.

In Immortality each player gets a Family Atomics token. You may spend that token to “blow up” the Imperium Row, removing all those cards from play and replenishing the row from the Imperium Deck. In this way, a player who is searching for better cards – or a particular type of card – for their deck has a better chance of finding what they’re looking for. 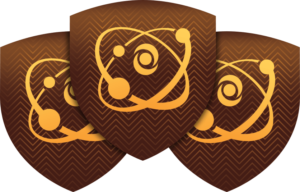 Check back soon for the next design diary discussing the role of the Tlelaixu Board and the Research track!