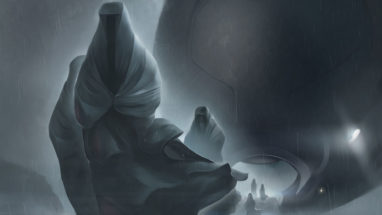 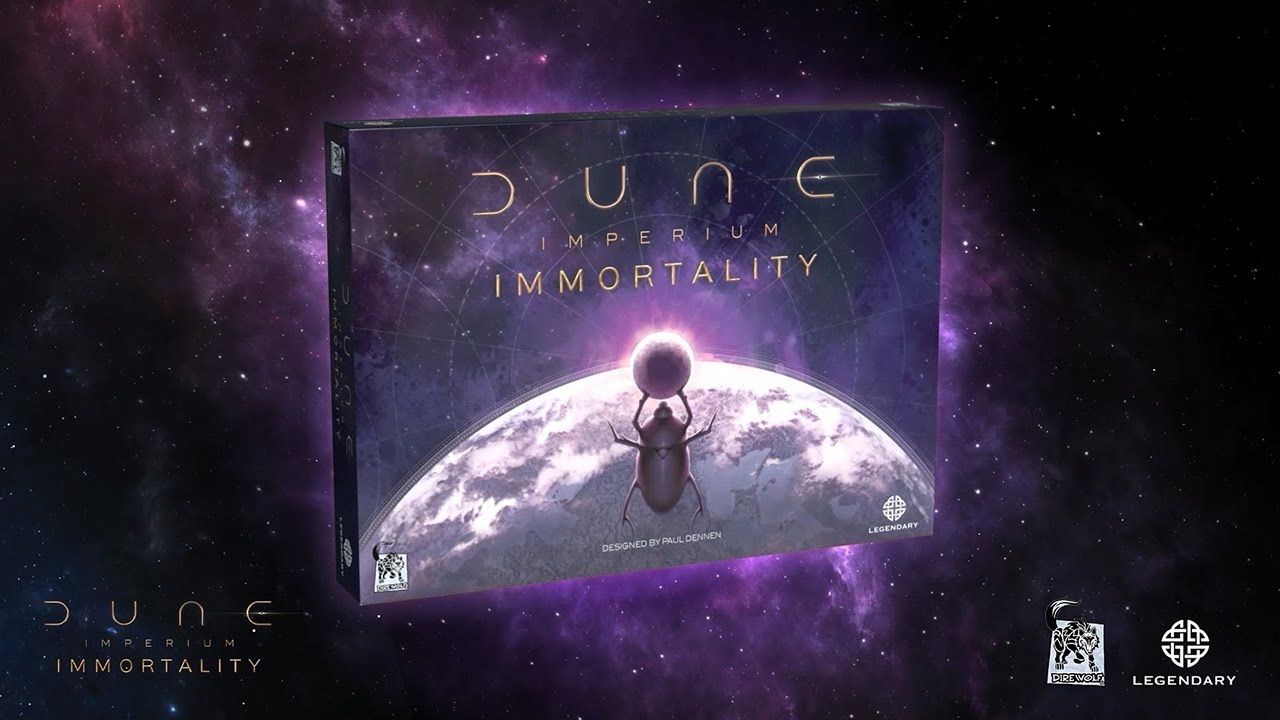 Pre-orders for Dune: Imperium – Immortality are available until November 1!

In the first designer diary for the Immortality expansion, we talked about how deck-building was the primary focus for this expansion. In the second diary entry, we delved into the thematically-rich, science-oriented society of the Tleilaxu. Those two ideas come together for today’s entry, in which we’ll cover the new grafting mechanism in Immortality.

Many of the cards in this expansion have the Graft ability, denoted above the agent box. On your agent turn, you will play two cards instead of one if at least one of the cards you play has Graft. When you do this, you can use any agent icon from either card to send your agent to a board space. Furthermore, you receive the benefits of both agent boxes.

This can allow you to get more done on agent turns than you normally could. I’m sure most Dune: Imperium players have experienced difficult decisions when pondering a hand that’s chock full of good stuff, and grafting cards can help alleviate a bit of that tension. Let’s look at a couple examples: 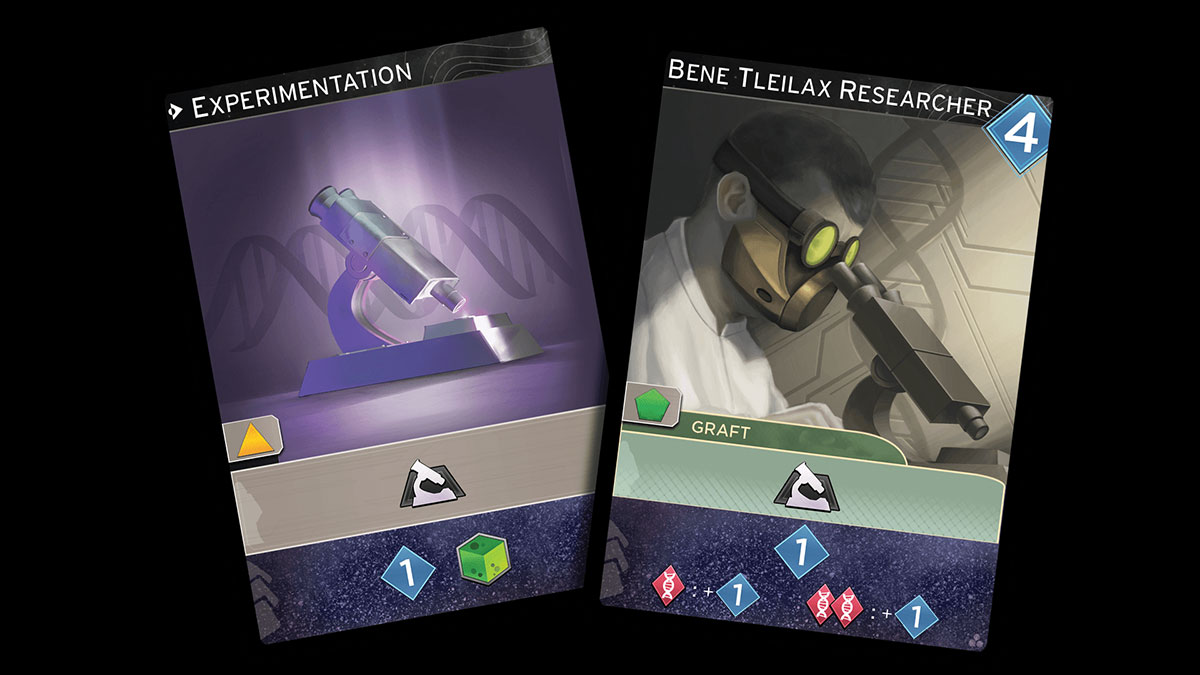 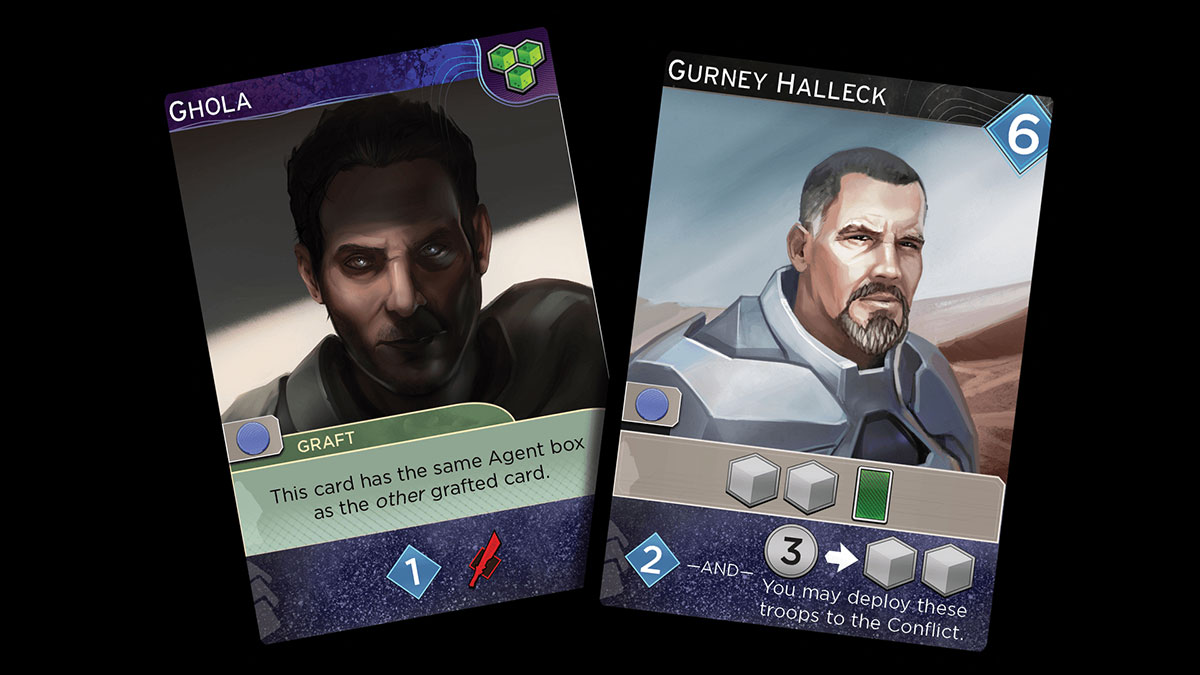 This second example shows one of the infamous inventions of the Tleilaxu – their gholas – and how they’re implemented. The Ghola card copies the agent box of whatever card you graft to it. In this case by copying Gurney Halleck, you’d recruit four troops and draw two cards! This particular graft combination doesn’t give you any more agent icons to work with, so hopefully there’s a board space you can visit!

Flipping the tension question from Agent to Reveal, one challenge that Graft cards introduce is that they deplete your hand of cards, so you could end up with a weak reveal turn. Because of this, some of the expensive Graft cards come with built-in card draw to make up for that natural disadvantage. There’s one Graft card that gets around this problem in a rather unusual way. It’s called Chairdog. Whatever card you graft to Chairdog will return to your hand at the start of your reveal turn. This essentially allows you to use both the agent and reveal boxes on a card during the same round. Preferably a powerful card. Here are a couple fun Chairdog combo cards: 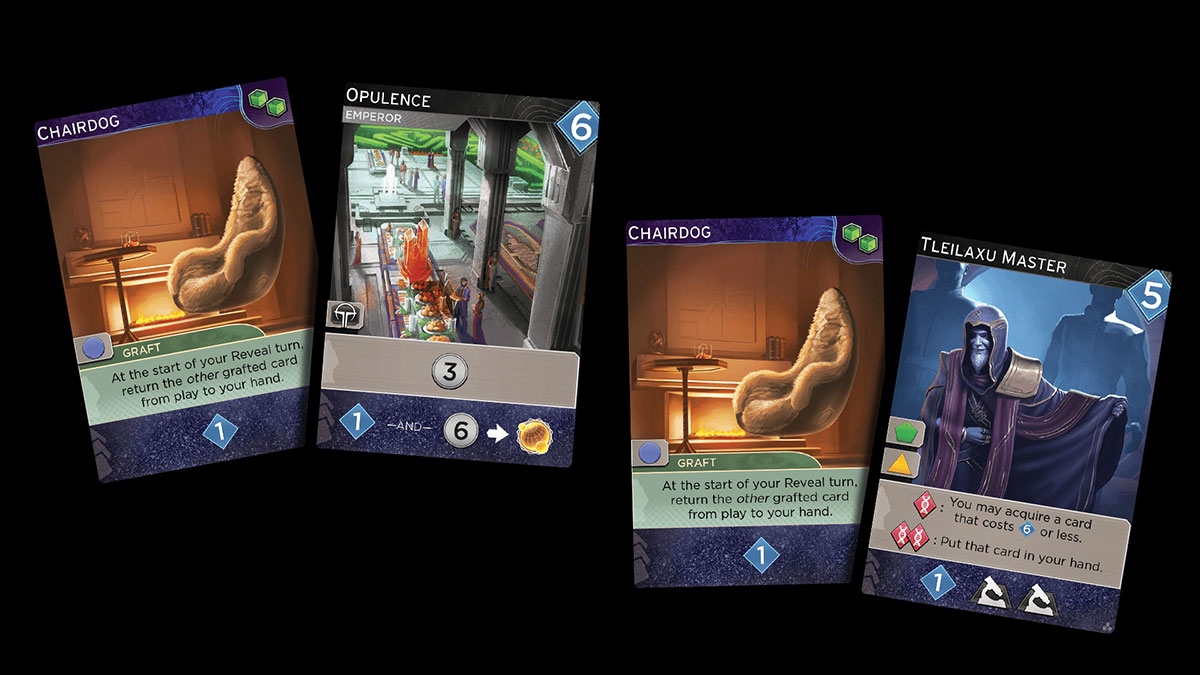 I hope the emphasis on deckbuilding is clear as we delve into these card examples. Both the Ghola and Chairdog exemplify this, and what’s a good combo card for Ghola is not necessarily good for Chairdog, and vice versa. Let’s take a look at some other Graft cards that create interesting deckbuilding opportunities.

Some cards are explicitly better when grafted. Pretty self-explanatory! 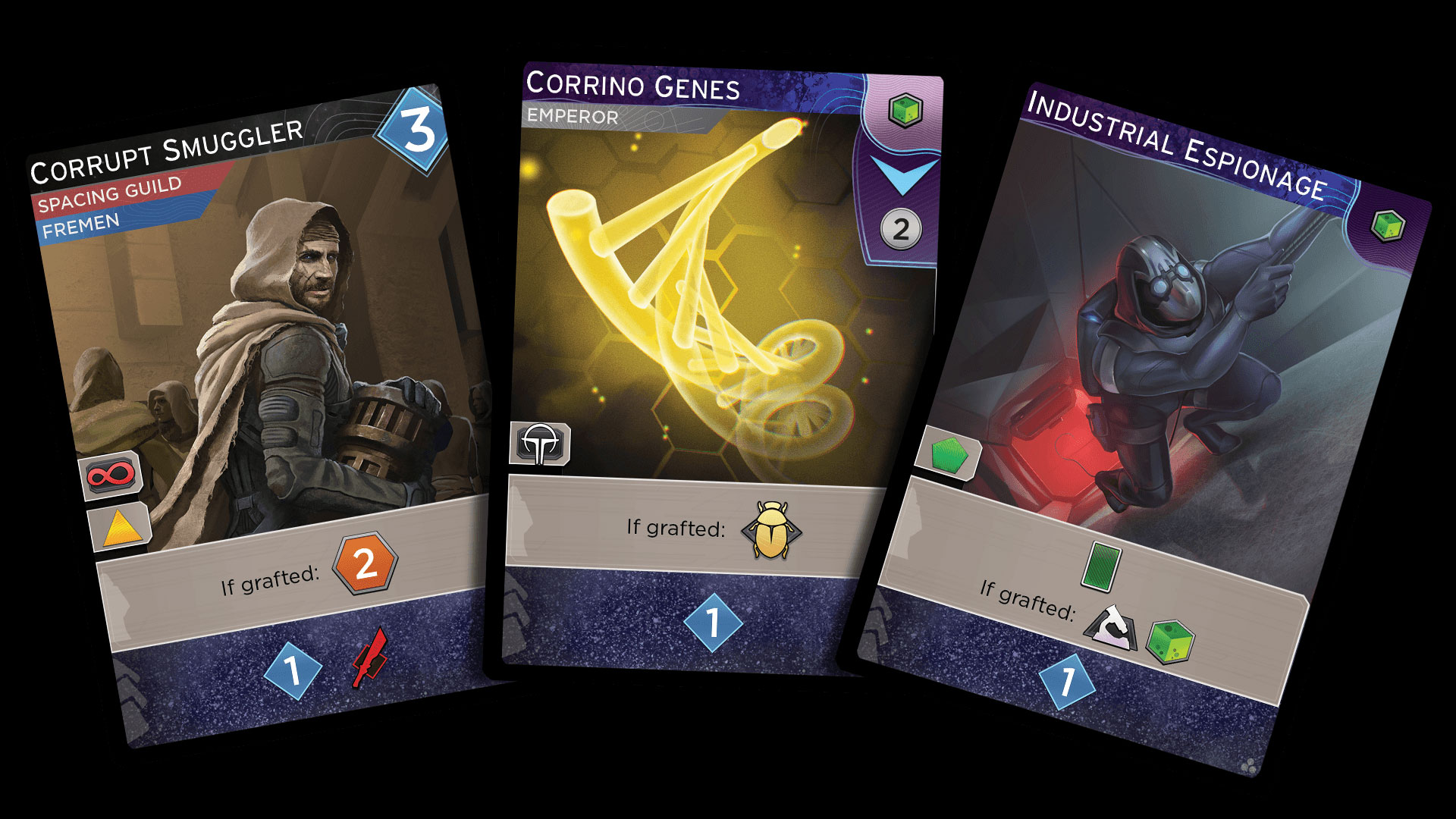 The card Interstellar Conspiracy asks you to have Emperor or Spacing Guild cards on hand. 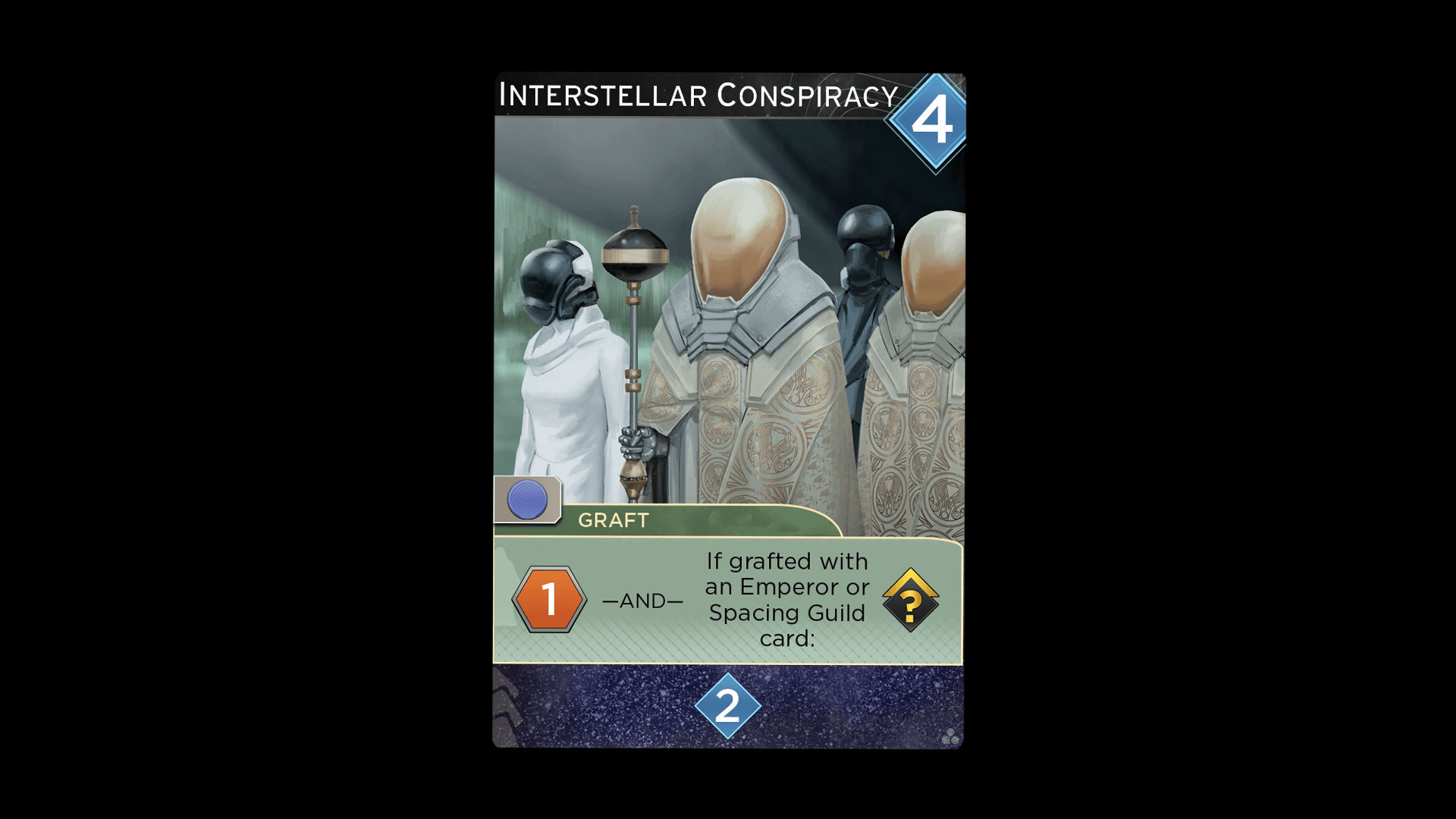 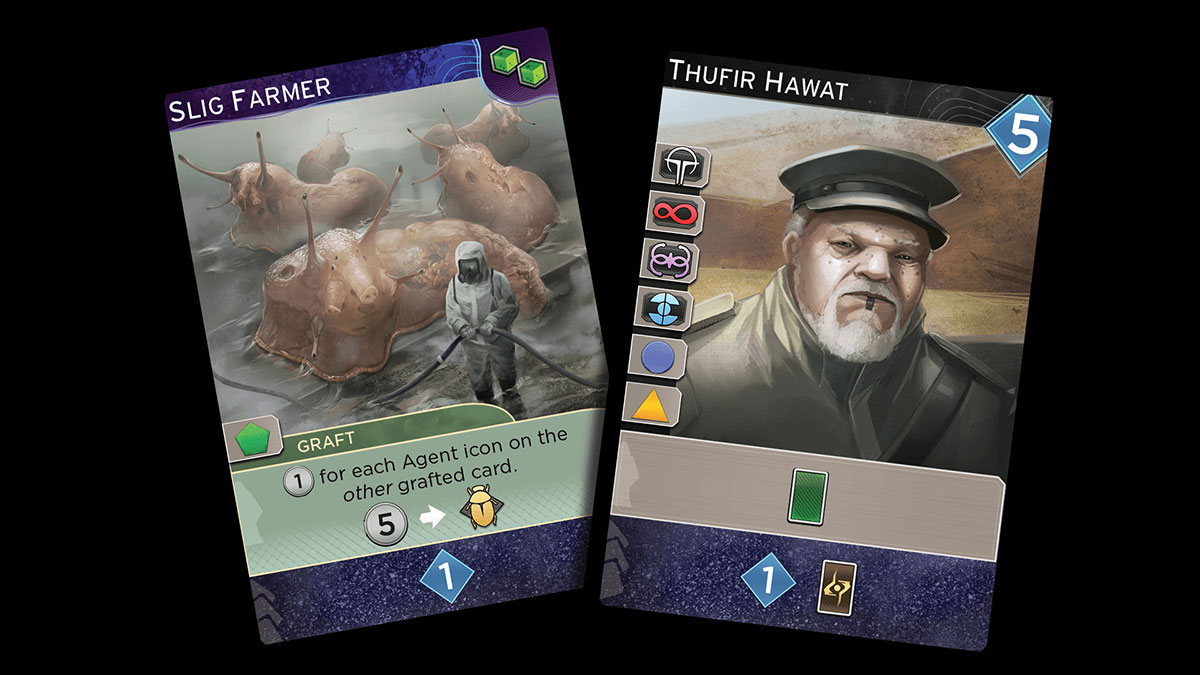 Finally, something I think is important when designing games and content: when possible, introduce distinct concepts that work well together. As an example, in the Immortality expansion, there is a new concept whereby some cards present a specific challenge to unlock their agent icons.

Here’s one example: Blank Slate. It only has three agent icons naturally, but if you graft it, it gains all four faction agent icons. Making it a very good card in a deck that contains Slig Farmer! 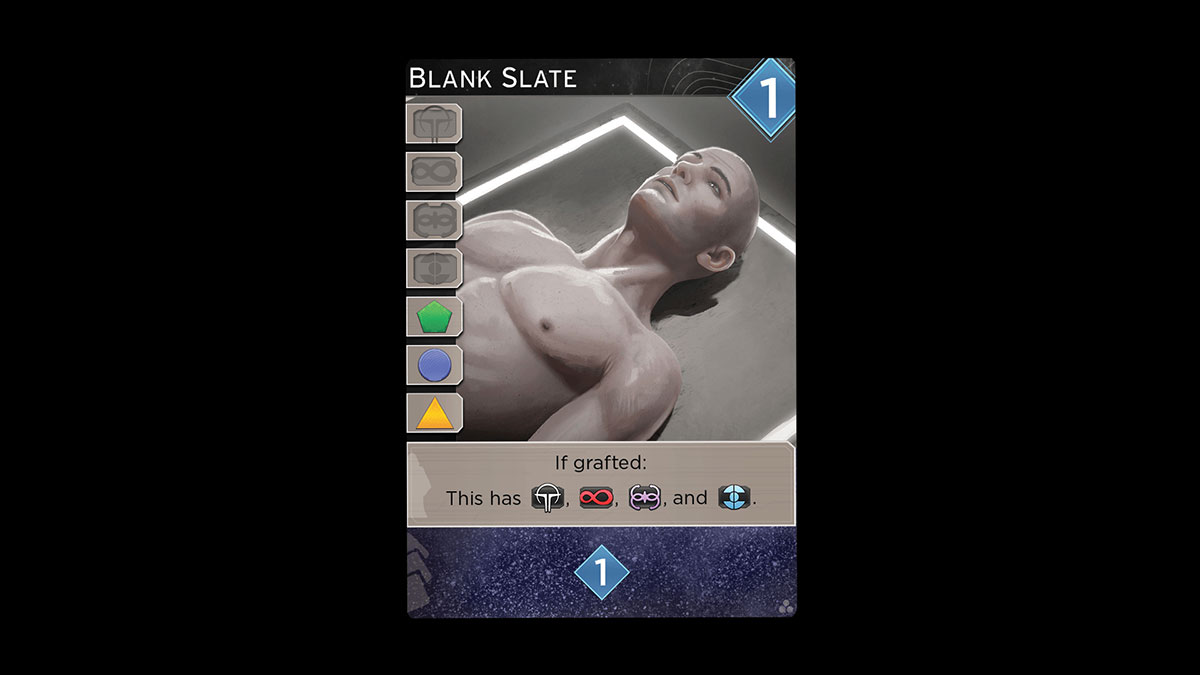 Here’s another “challenge card” called Long Reach. It can be quite powerful in a deck that focuses on the Bene Gesserit. But there is another way you can play it for its agent box even if you have no Bene Gesserit cards. I’ll leave that method for the reader to solve! 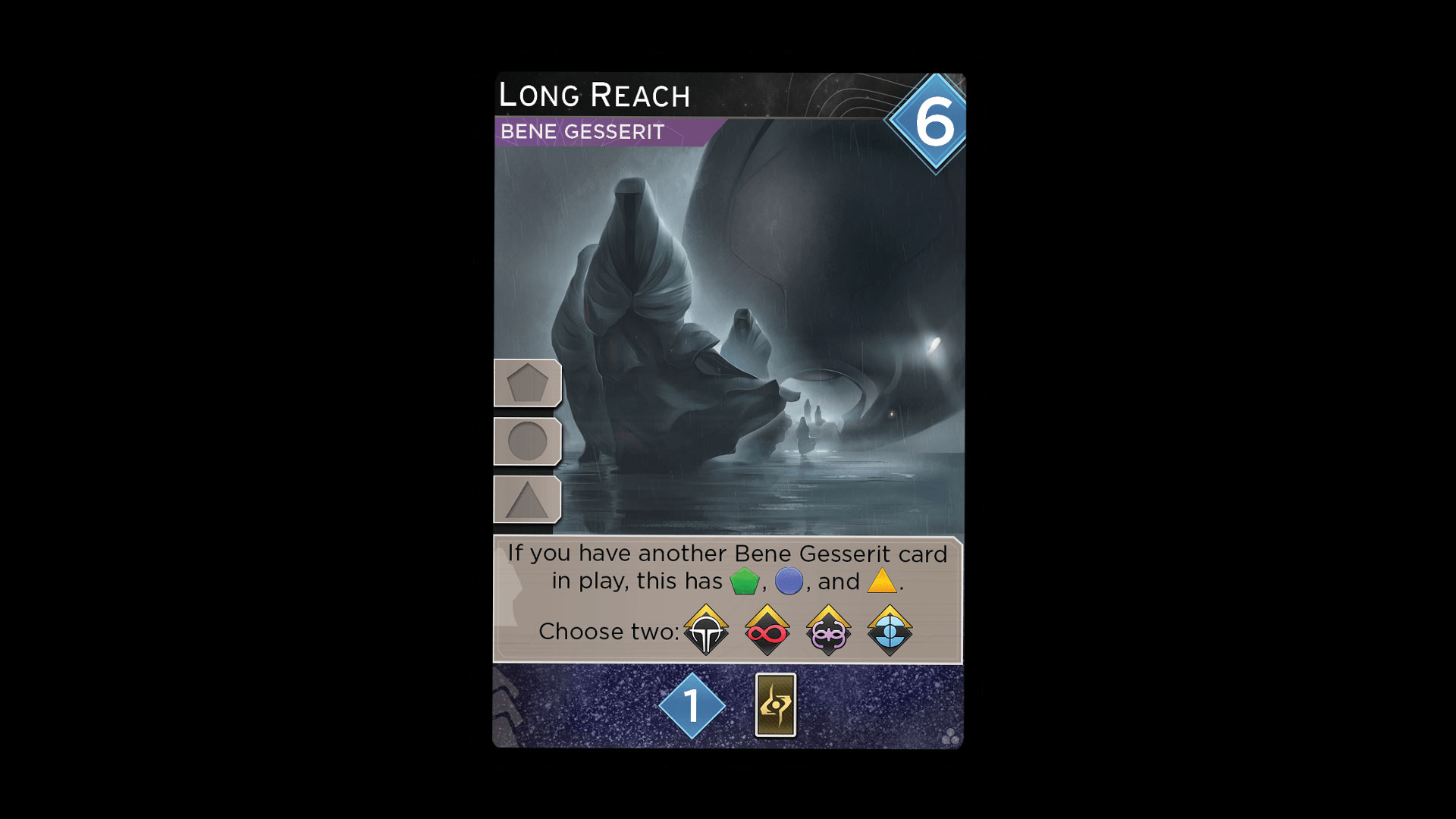 Hopefully these design diaries gave you a fun look behind the scenes at some of the thought processes that went into Dune: Imperium – Immortality.

…and don’t forget to pre-order by Monday!