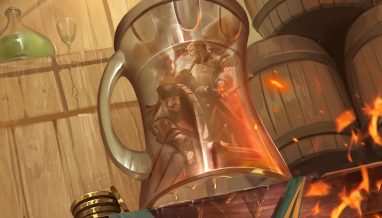 Eternal Celebration is almost here! With the chance to play with every card in Eternal for free, there’s going to be some wild stuff out there!

We’re getting things started early – right now, in fact – with a week-long Brewer’s Ball leading up to the Celebration!

The Brewer’s Ball is a weeklong community brewfest hosted on the Eternal subreddit prior to the Eternal Celebration that begins on Friday. Each day this week, we’ll be putting up a new deck-building challenge. Here’s today’s:

Tribal Clash. We want your favorite decks built around a unit type. Whether it’s mighty Sentinels, high-flying Valkyries, or even pesky Grenadins, show what an Eternal tribe can do when they work together.

Next week, during the Eternal Celebration, we’ll be playing the sweetest decks from these threads in dev streams, digging deeper in articles on awesome Eternal brews, and showing them off as featured “Decks of the Day” when you log in to Eternal.

To participate, use the Export Deck button in Eternal, paste it into the Reddit thread and include a brief description of what’s going on with your deck. Also, including links in your post to your deck on EternalWarcry is a great way to share your concoction with more people on a great community-run site.

We’ll be sending a prize code with a few goodies to Reddit users whose decks we feature. We’ll be selecting decks based on popular upvoted submissions as well as anything from the thread that catches our eye. Don’t worry if your brew isn’t for tournaments or some masterpiece, we want all kinds and sizes of decks from Gauntlet memes to flavorful delights.

Each day next week during the Eternal Celebration there will be a dev stream with our Eternal designers pitting brew against brew from the Reddit submissions. The first one is at 1PM MDT (UTC-6) on Monday, 10/26 at twitch.tv/direwolfdigital. Go follow now to get notified when we go live!

In the meantime, go submit your Tribal decks on Reddit. Submissions are open until 10/26 but the sooner you get it in the better. And if you want a preview on the upcoming deckbuilding challenges this week:

Now get to brewin’!