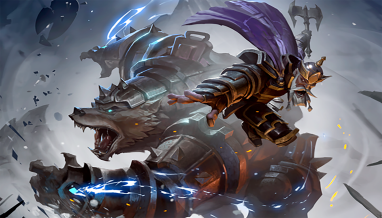 Let’s take a first look at the design goals for Eternal: Chronicles of the Throne: Gold and Steel – available now for preorder!

As we’ve written about previously, Eternal: Chronicles of the Throne is the physical sister game, and was inspired by, Eternal, Dire Wolf Digital’s online card battler. We were excited to bring CCG-style combat mechanics and synergistic card combos to a small-box tabletop deckbuilder, and we’re just as excited by what the first expansion is bringing to the table.

When I first began working on this expansion, I wanted to find a way to bring one of my favorite aspects of Eternal over to Chronicles: hidden information and the ability to unleash surprise effects on your opponent. In Eternal (and most CCGs), this is done by preventing players from seeing their opponent’s cards until played. But, in deck-builders like Chronicles, there is a forge row where players acquire cards to build their decks, so by its very public nature, you won’t ever be surprised by the forge cards subsequently played by your opponents.

The Market Deck and Drafting

To inject a deck-builder with a CCG-esque sense of secrecy and surprise, we decided to start each Gold and Steel game with a brief card draft that allows players to secretly select cards at the start of the game that will remain hidden from their opponents until played. For this draft, we introduce an entirely new deck of cards, called the Market deck. Every card in this deck is unique, and after the initial drafting phase, you will have stashed three of them into your “Market.”

The power level of Market cards varies considerably. As an example, here are two cards on opposite sides of the spectrum: 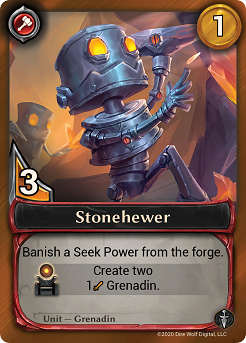 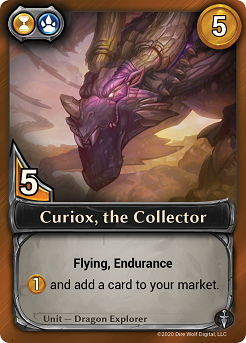 Anyone who has played Chronicles would certainly recognize that Curiox is much more powerful than the Stonehewer. But the catch is that in order to play a card from your market, you must accumulate enough gold to pay that card’s cost, as noted in the card’s upper right corner.

Let’s take a look at how players can earn gold.

Taking It Up a Notch

At the start of a Gold and Steel game, each player gets a Treasure Trove card that replaces one of their Diplomacy cards. 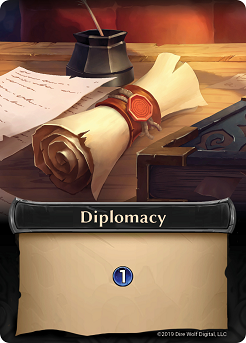 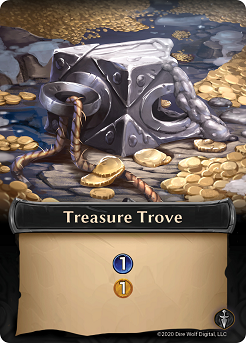 Treasure Trove is strictly an upgrade to Diplomacy in that it not only generates one power, but it also gives you one gold when you play it. When you gain gold, you simply take a gold token and place it in front of you. You can carry over your gold hoard from turn to turn, in order to build up to a powerful Market card, like Curiox. You don’t have to spend your gold as soon as you can; in fact, there might be tactical reasons why you want to hold off.

For example, perhaps you have 5 gold and Curiox in your Market, but you know that your opponent has a devastating flying unit that you want Curiox to block. Oh, did we mention that when you play a card from your market, you get to play it immediately? This goes directly to the design goal that we stated up front: we want players to be able to stash away some surprises that they can unleash on their opponent.

Let’s take a quick tour of some of the cards you might draft at the start of a Gold and Steel game, that can be used to surprise your opponent with tricky and/or powerful effects.

Learned Herbalist is a nice surprise against an aggressive opponent. You can deploy her to block an incoming attacker and get a bit of healing (assuming you stock your deck with enough spells). 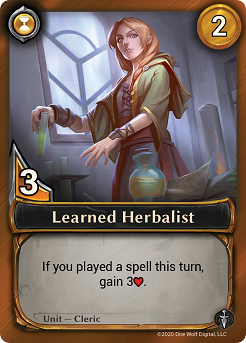 Harsh Rule is the ultimate life-saving trick that you can keep in your back pocket until your opponent unleashes an all-out attack. But, as powerful as it is, you can only use it once, so use it wisely! 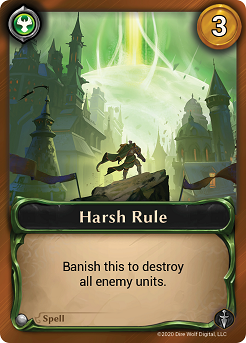 Dark Return is another one-time surprise, but it can be an awesome one, if you’ve managed to acquire a powerful unit into your discard pile. 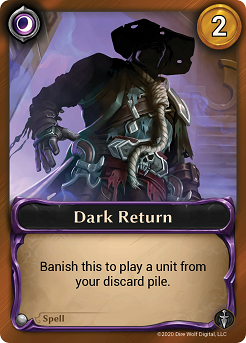 Not all surprises are about defense. Here are a few units that can potentially serve as “surprise finishers” to close out a game: 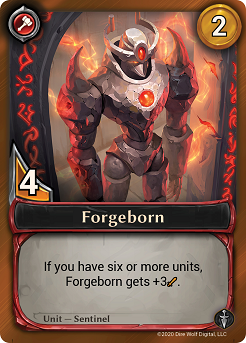 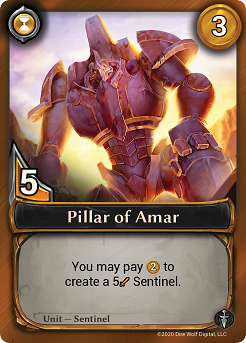 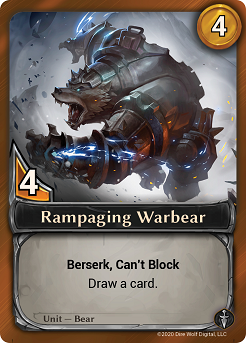 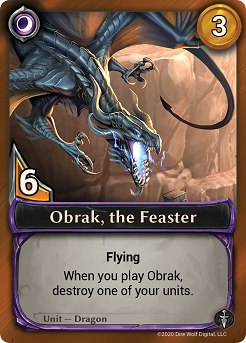 The first card set that we assembled to test the Market and gold mechanisms, while fun, included too many powerful defensive tools that felt too difficult to play around, and were too lenient in what they asked you to do to gain access to that power. During early development, this led to the feeling that you were a sucker for “going aggro” because your opponent’s market could shut your aggression down too easily. After coming to this realization, the development team revised the mix of market cards so that the most powerful defensive tools came with some kind of deck assembly requirement (see Learned Herbalist above) or, in the case of Harsh Rule, became a one-time effect.

We also used the same philosophy to slant some of the most powerful offensive cards so that you’d need to dedicate to a particular strategy. Not all cards in the Market deck require you to jump through a hoop to unleash their maximum effect, but we certainly took an approach where if you wanted to swing for a really big effect, especially at a low-to-mid gold cost, you had to be asked to do something in return. Having said that, that guideline breaks when you have to pay 4 or 5 gold for a card. Just surviving long enough to play a 4-gold or 5-gold card is not trivial, and typically requires you to draft and play lower-gold Market cards to get there, so you really need to accumulate something like eight to ten gold by the time you are in a good enough position to play out a powerhouse card like Curiox, the Collector. Many of the cards already shown in this article are prime examples of this philosophy.

Let’s take a look at a few more cards that can be quite powerful if you build your deck to support them: 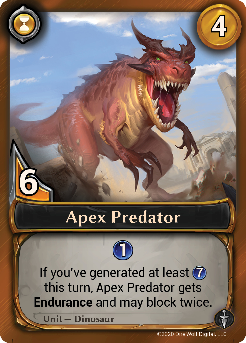 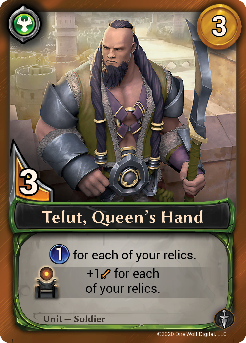 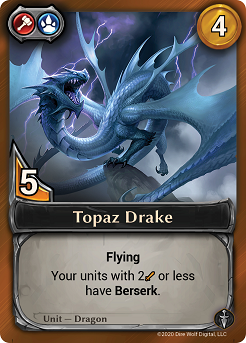 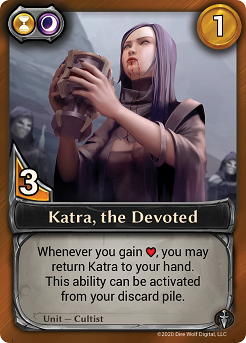 We talked earlier about how you can stash cards into your “Market” but we didn’t talk about what the Market actually looks like. Conceptually, a Market is just a place where you keep your cards hidden from your opponents. Theoretically, you could play with these cards face down on the table until you’re ready to play them. However, we wanted to do better than that. So we put four Market trays into the expansion box, so that each player could keep their Market cards upright for easier reference. 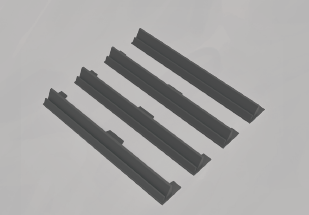 The Market trays are wide enough to comfortably hold your starting three Market cards, but you’ll also be able to add more cards to your Market during play. Whenever you “add a card to your Market,” you simply take the top card of the Market Deck and tuck it into your Market. When you gain cards in this way, other players don’t get to see what card you got, so adding cards is another way to store up more surprises for your unwitting opponents!

Quenching Your Thirst for Gold and Glory

If you drafted an expensive card at the start of the game, or acquired more Market cards during the game, you really can find yourself in the, ahem, market for more gold than your starting Treasure Trove can provide. After all, while Treasure Trove is nice, it will only generate one gold each time you make it through your deck. You’re going to be on the lookout for more. And here’s where it’s important to note that the Gold and Steel expansion doesn’t just add a Market Deck to Chronicles, but it also adds 29 new cards for your forge decks.

Here’s a sampling of some of the new forge cards, with a bit of a focus on gold acquisition: 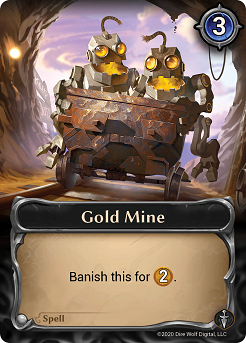 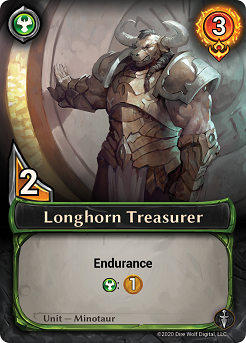 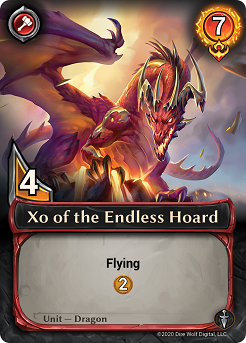 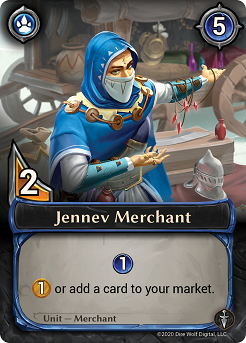 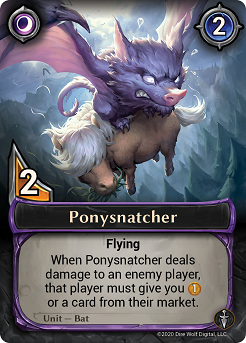 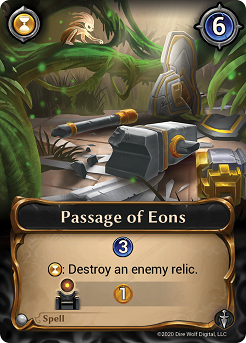 We hope you enjoyed this sneak peek at the upcoming Gold and Steel expansion for Eternal: Chronicles of the Throne. We certainly got a good look at the Gold side of the expansion. Next time, we’ll dig deeper and take a look at what went into the Steel side.