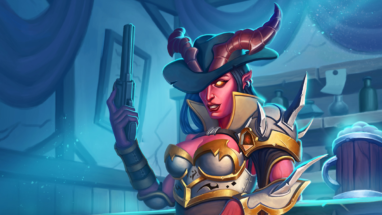 Welcome to the latest round of Cold Hunt previews! I’m Devon Rule, one of the designers on Eternal, and I’m excited to show off some of the new territory Cold Hunt is exploring, and a new lore post!

From the Scions to Quinn and Raniya, our characters are the heart of Eternal’s world. Leading up to Cold Hunt, we’ve added a badge to show the importance of those unique Heroes. 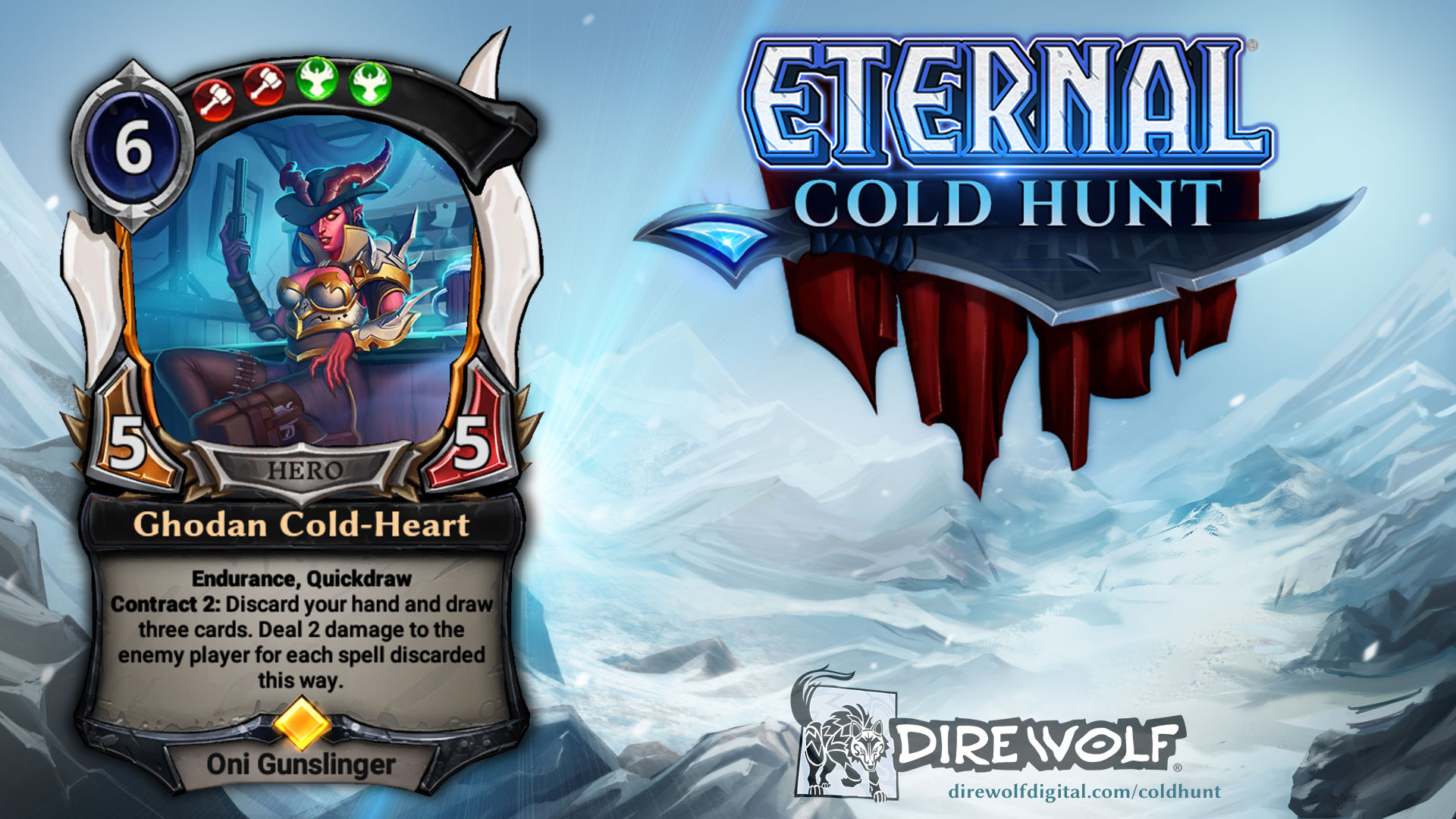 This is not someone you want after you. It seems like Ghodan has learned a few tricks since we last saw her in Dark Frontier. (If you need a refresher on Contract, check out last week’s preview article.)

Ghodan, Cold-Heart is an extremely flexible card. You can use her to refill an empty hand, finish off your opponent by discarding a pile of spells, or just hold onto your cards while relying on her skills to play offense and defense at the same time.

Let’s talk about that Hero badge, though. A few clever readers will have already figured out that by displaying which units are heroes, it becomes something other cards can reference. The Hero type has been searchable in the deckbuilder for a while, but up until now it’s been invisible to the majority of players.

That changes with Cold Hunt. Now which cards are heroes and which aren’t can matter a lot. 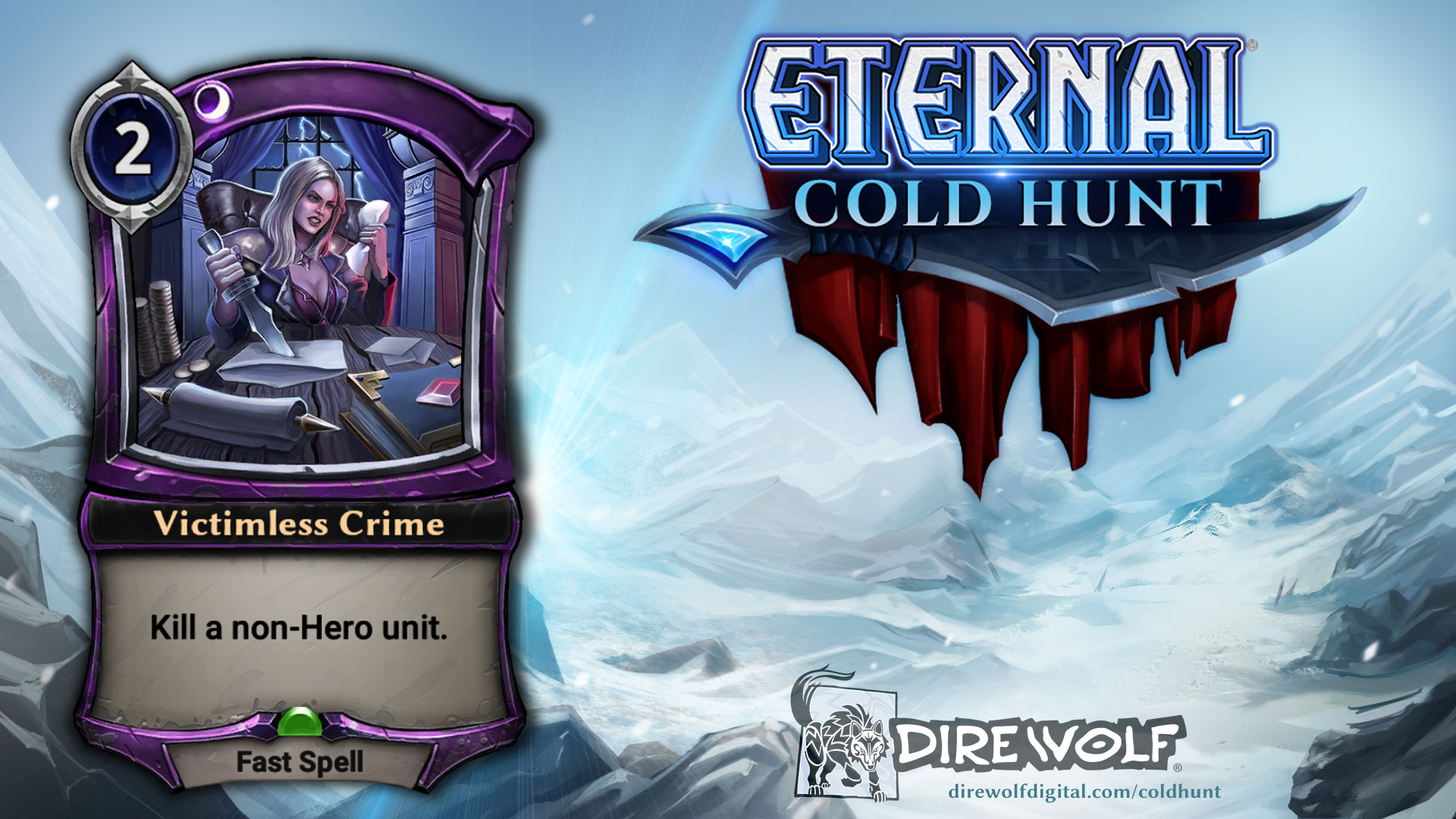 Victimless Crime is a powerful removal spell, capable of efficiently killing anything from Champion of Fury to Sandstorm Titan. At 2-cost and Fast, it compares to long-time staples like Annihilate and Defile.

But if you start seeing a lot of Victimless Crimes in the ranked queue, you want to call upon some heroes. Maybe Alhed Ascending is a better bet than Teacher of Humility this week. Maybe next week Annihilate will be on the rise to kill all those troublesome heroes, and it will be time to dust off the Intrepid Longhorns. Victimless Crime adds Heroes as yet another axis to the metagame’s dance of threats and answers. 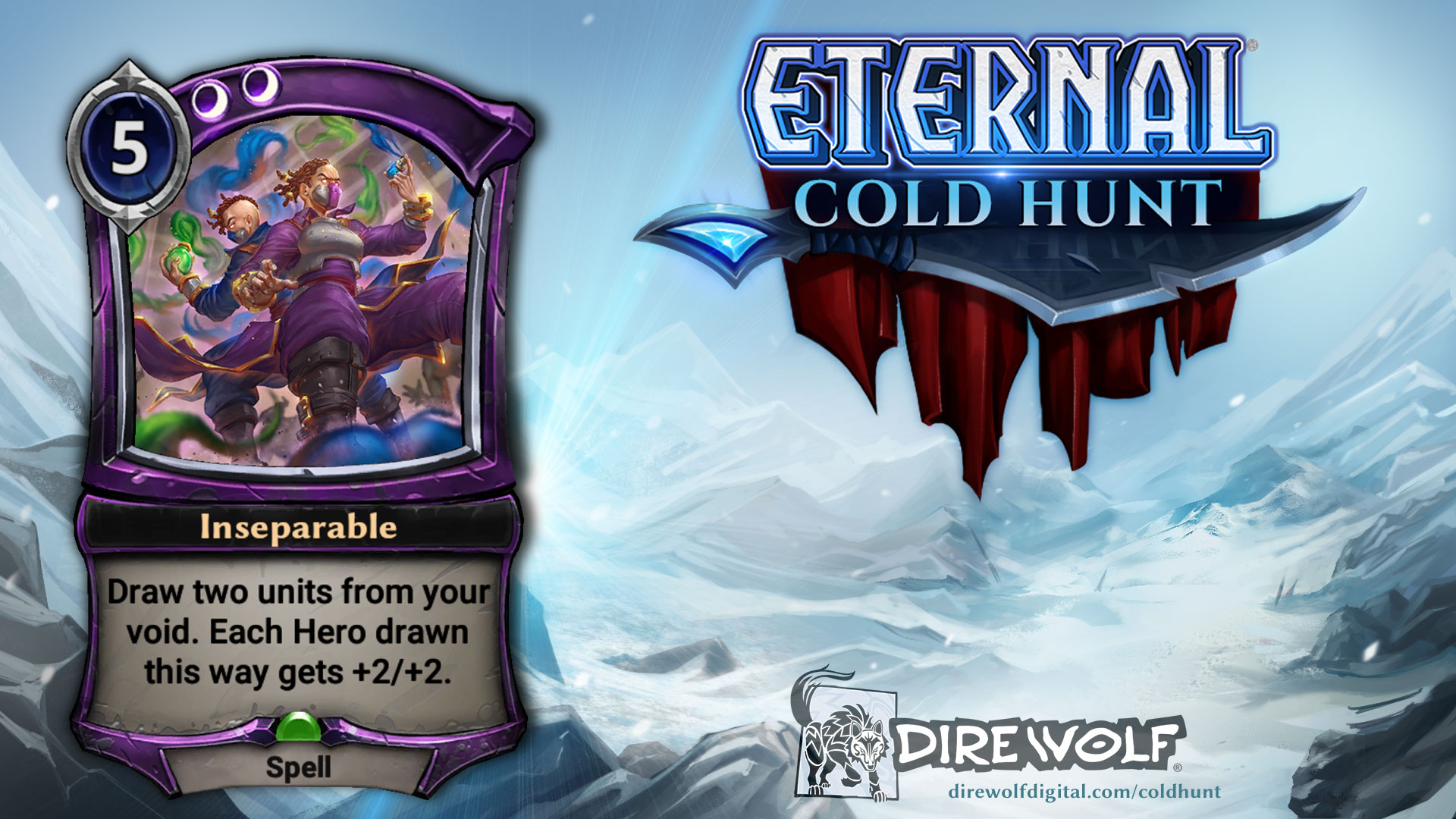 Inseparable is passable if you’re drawing two nameless randos, but really shines in a deck with enough heroes to hit two consistently. Whether you’re considering your next pick in Draft or Throne staples like Vara, Vengeance-Seeker, Inseparable is a good reason to prioritize adding Heroes.

If you want to play with some new heroes early, check out the Heroic Invocation preview event, starting tomorrow! Keep an eye out for some more awesome Hero-focused events after Cold Hunt releases.

The Cold Hunt begins on November 11th – get a head start with the preorder!

Read on for some brand-new Eternal lore!

The polished stone of the balcony railing was warm against Eilyn’s fingers from the afternoon sun. She watched the crowd below in the market and waited with more interest than concern. She followed a cluster of oni, elves, giants, and humans that moved with wary, uneasy, and slow purpose. One of the group approached a shopkeeper. Even at such a high vantage point, Eilyn recognized an attempt at amiable posture when she saw it.

“Your report said the Shadowlands?” she asked a green hooded figure behind her.

“Yes, your majesty. A place purported to be called Xulta,” came a gruff voice in response.

Eilyn nodded as she followed the movements of the group below. Each wave of a hand, each poise of the body, all movements calculated between her people and theirs. A silent, uncertain truce as coins and words were traded.

“And word of how they survived, Sigvard?” Eilyn asked.

“People spoke more of what they saw and not so much what they discussed,” came another gruff reply from her advisor.

“Our people have been through much. They won’t fall prey to paranoia like Rolant or that northern usurper, but their caution is warranted,” Eilyn said as she leaned against the balcony. The group of Xultan refugees continued along through the market toward a tavern.

“It is not so easy settling in Argenport,” she said lightly and glanced toward the horizon. A glimpse of Caiphus came across her mind and she smiled.

“It can help if you have a guide. Let’s meet them then, shall we?” Eilyn asked and turned to face the armorclad warrior. He gave only a nod and Eilyn departed the balcony with him.

Eilyn frowned at the wooden table in the middle of the tavern’s meeting room. She was sure it had been cumbersome to even get into the small space and the bulky frame forced tight quarters. It would suit her needs well enough as she spoke to each representative of the various Xultan caravans.

She sat at the head of the table with Sigvard leaned against the door to her left. She glanced between the folk gathered before her. Some dared not look at her, some matched her gaze with doubt, and some met her look in stride. The people of Xulta were a varied sort, it seemed.

The two giants were settled against the back wall both with arms crossed. Eilyn noted the gems of black and gold that lined their bare arms with interest.

“Thank you for meeting with me,” she started with a warm smile to each of them, “and I want to mention, all is well. I’m not here due to alarm or concern.”

Some of them nodded, a white-bearded oni leaned against the table and matched her gaze with curiosity.

“It is rather strange then, for a ruler of…” the oni pondered a moment then he spoke, “Argenport, to speak to common folk, is it not? Surely you have more important duties.” Eilyn noted the hard stressed syllables of Argenport. She appreciated his wrestling with her unfamiliar language to allow the meeting to happen.

“Perhaps some may think that, though this is not a simple conversation between myself and my subjects. It is a matter of diplomacy, and I’d like to begin that on a positive note,” she replied with another smile. She recalled Kaleb on his throne, a bored expression on his features as he heard another dispute between two market stall owners and a squabble about vegetable products. He’d survive.

A blonde elf tapped her fingers on the table then ran her fingers against a gem on her forearm. The gem’s gentle purple glinted slightly from a flickering lamp.

“It seems… you wish to aid us then? Why?” she asked. She had frowned at her own pause to find the right words. Eilyn knew well the frustration of a language barrier that came with the journey to a new land.

“I know how difficult it can be, to first come to such a vastly different place. Vastly different people,” Eilyn said. She let the memories of Caiphus wash over her again but she kept her gaze on the elf. Eilyn thought of her initial suspicion at Caiphus’ welcoming nature. His willingness to help as she got used to Argenport, its bizarre customs. It was so different from home. She had felt so lost. So alone. She shook her head and brushed away all but the thoughts of that smile of his she missed so dearly.

“A journey through the Shadowlands is not so easy a feat to survive. I admit, I am also curious how you managed it,” she said. Her tone shifted from jovial warmth to a more serious tone. Not everyone would want to reveal their secrets of survival.

The group glanced between one another, as if silently deciding who might reveal what to their potential new ally. After a few seconds of deliberation, some of them nodded. The bearded oni spoke.

“Your people seem… willing to trust us as well. It is… peculiar but not unnoticed. We shall look to react in kind to it,” he said.

“We are thankful toward our ancestors and the Waystones that guided our path from our home to… our new one. And we thank you for the welcome,” he finished as his fingers grazed the gems along his arms. Most of them appeared black like obsidian.

Eilyn looked fully at the gems and nodded in reverence toward what she presumed were artifacts of a more holy nature.

“Should we expect more of your number then?” Eilyn asked and her smile returned.

The oni shook his head.

“Some of us have journeyed elsewhere in search of an artifact. Perhaps you know of it, as your people are knowledgeable of the Waystones,” he said.

“What is it? If I haven’t heard of it, I can certainly speak with those that might, if it could help your people,” she replied.

“A mirror, one that is said to be connected to the power of the Waystones, we wish to only witness it. A magic that may relate to just how we came here safely. Some of us have gone on a pilgrimage of thanks,” he explained.

Eilyn nodded. She thought of Vara shortly, recently departed on her own pilgrimage for Talir. She felt a small pang of concern at her daughter’s safety despite the guards that had journeyed with her.

“Hm, I cannot say anything comes to mind, but I shall certainly keep the search of your people in mind,” Eilyn said.

The oni gave a nod of his own and a small smile accompanied it.

“Now then, what is it you have in the way of lodging, my friends?” Eilyn asked as she leaned back against her chair. A new start for these newcomers with Argenport on the mend. Eilyn smiled more broadly at the potential of it.

Stay up to date on everything coming to the game in Cold Hunt (and get a free pack with every email) by signing up for the Dire Wolf newsletter!