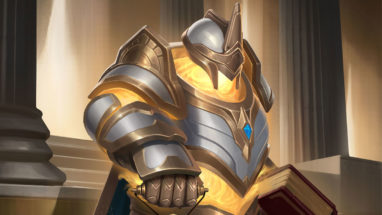 Hello, I’m Patrick Sullivan, one of the designers on Eternal, and what follows is another set of live balance notes. This update is comprehensive, intended to make positive impacts in Throne, Expedition, and Draft. The vast majority of the updates are buffs, with a handful of nerfs meant to attack cards and/or decks that have become overrepresented.

Skycrag Aggro and/or Yeti Aggro have been among our best-performing decks in Throne for an extended period of time. We believe that moving the metagame into a healthier place requires changes to more than one card. Obviously, there are many candidates to choose from, but the primary goal is to reduce overall power and give more opportunities for satisfying counterplay, and within that context a few cards stood out. Oni Patrol was at the top of the list—it’s a lot of power in something cheap and not especially interesting to play with or against. We believe this version can still be competitive even with its rate toned down.

.League Explorer is receiving two changes—the second Fire pip to make the card slightly less reliable in multi-faction decks, and a change to its attack ability. Now League Explorer will either play a Depth Charge, or increase a Charge’s damage by two if you already have one. Hopefully this gives more of an opportunity for relic destruction to work against someone who has come out aggressively with a League Explorer but before they’ve been able to empty their hand.

.Milos, Rebel Bomber is a fun design, but in conjunction with League Explorer facilitated openings a little long on Charge, and a little light in terms of how much blocking qualified as positive interaction. With the removal of Overwhelm, we hope to preserve most of the power and fun of the card, but give more satisfying windows for counterplay.

There’s a lot to like about Pokpok, Rockpacker—it’s an iconic part of a beloved unit type, and it’s a materially different experience from most of the powerful Yetis. An aggressive unit with not much strength but a lot of health creates novel experiences against cards like Hailstorm or Saloon Massacre. That said, it also contributes to games where the opposing player is overwhelmed with a flood of cheap units that are difficult to interact with. With this change, we hope to preserve much of what is fun and distinct about Pokpok while toning down the frequency with which a Yeti deck has overpowering opening turns. 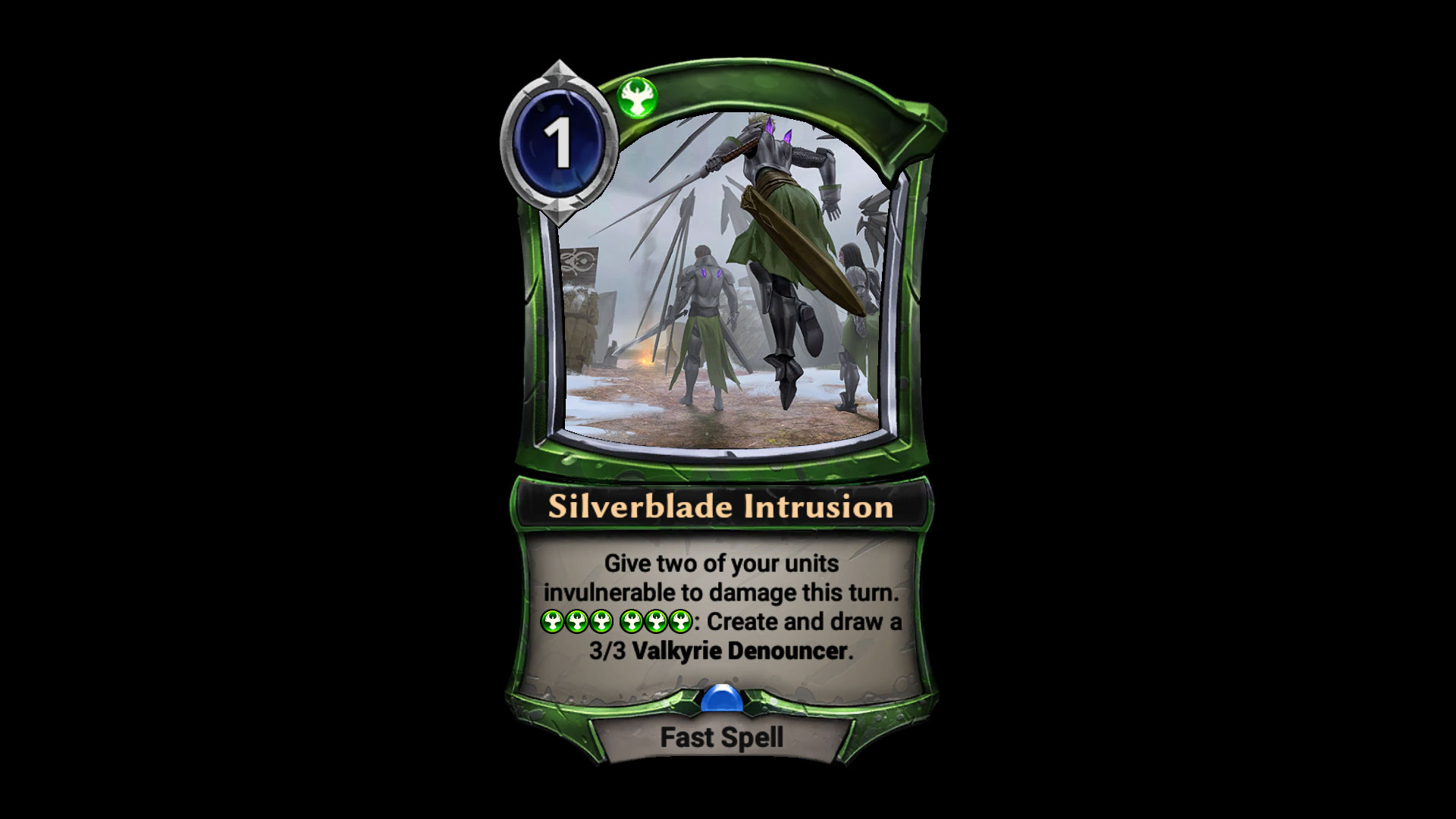 .Silverblade Intrusion has been a bit high on representation and slightly redundant given the plethora of powerful ways Valkyrie/Hooru decks have to protect units for 1 power. The card is also pretty complicated to play against in practice, and that complexity is multiplied by an incredibly swingy reference to cards in hand. This is more of a “quality-of-life” change than one motivated primarily by power level. We hope this design is slightly less strong, but significantly less burdensome for the opposing player. 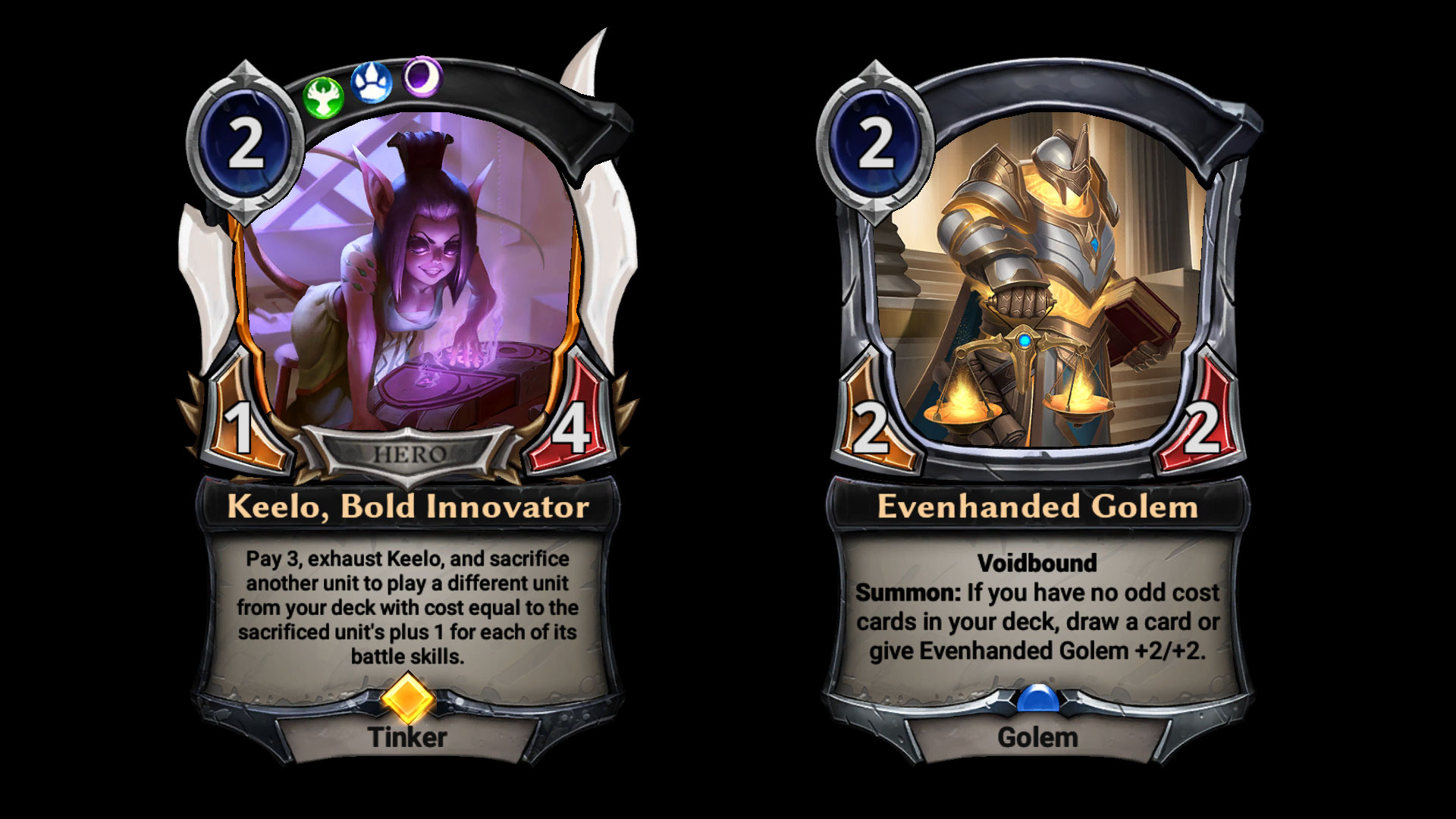 Both of these cards are receiving some additional power in some respects but are overall weaker, so we’re happy to bundle them along with the more straightforward nerfs. Keelo is an extremely fun design that facilitates a number of novel decks, but at two cost, and two to activate, it plays much closer to a spell than a unit. We prefer for decks that are built around combos to have to put key pieces at risk rather than easily set up to do everything in one shot, and we hope that increasing the activation, along with giving Keelo an extra point of health, moves the needle more towards putting it into play before the activation becomes available.

.Evenhanded Golem is a contentious card; it has received more live-balance attention than any other card in Eternal’s history. We have made multiple efforts to preserve the card as a competitive option, rather than nerf it as hard as we could have. There are good reasons for this—we appreciate cards that engender different deckbuilding incentives, and we also love cards that inspire different sorts of counterplay, like adding Firebombs to the opposing deck, or modifying costs. That said, Evenhanded Golem has become too ubiquitous—its representation among midrange and control strategies of every faction combination is unhealthy for a factionless card. Additionally, the card is much stronger for subsidizing decks with very few units, or for decks looking to play an inordinate number of turns, more than for decks with what we consider to be healthier play patterns.

We are hoping for a number of outcomes here—that Evenhanded Golem is still an attractive card worth building around, that the card becomes weaker at facilitating decks looking to play double-digit turns, and that the card actually becomes more fun to play with, too. Getting provided a decision (a card or additional stats) is a more replayable experience than not, and if we can simultaneously make this card a bit weaker and much more fun, that’s a great outcome. 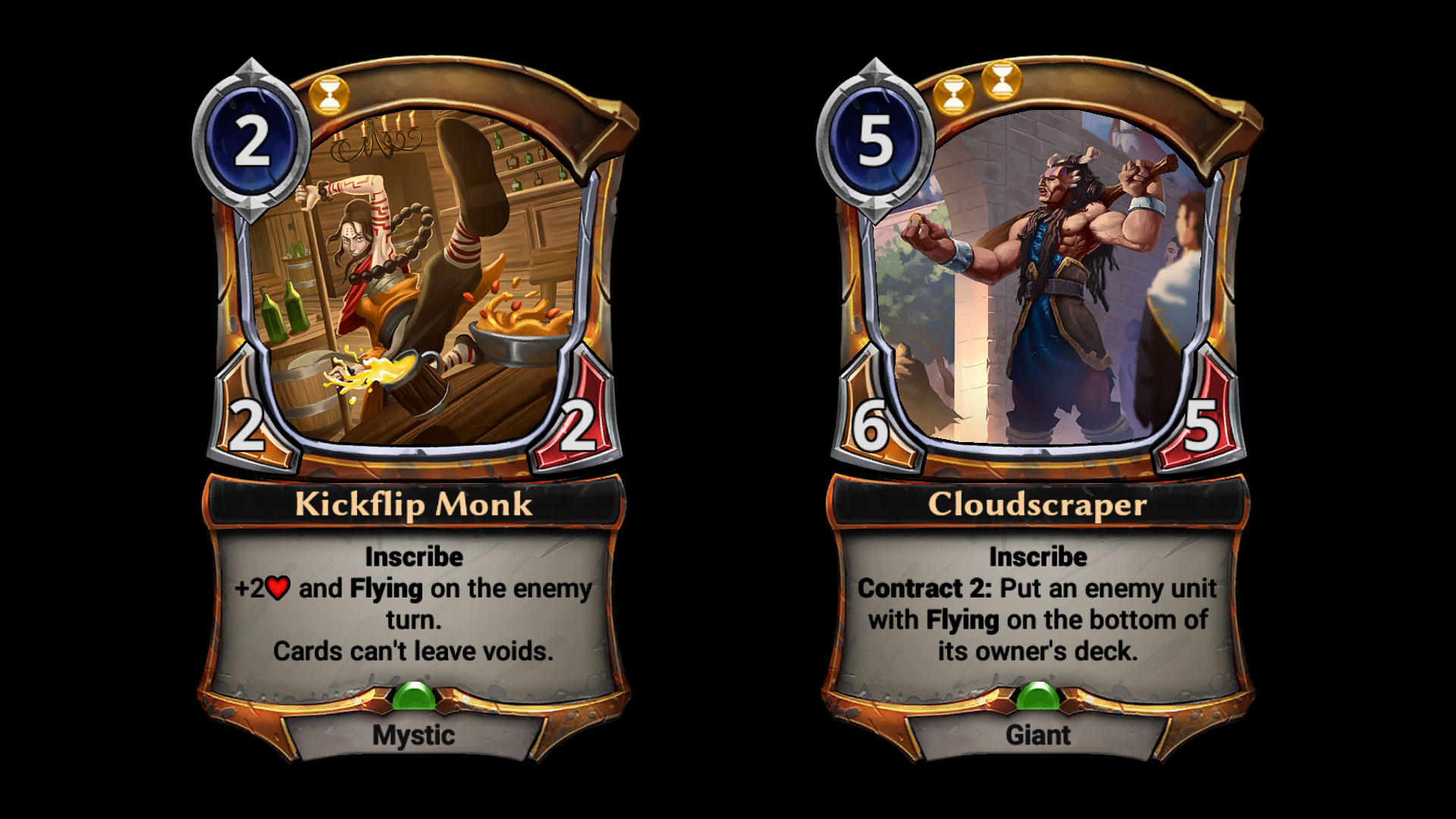 We believe our Expedition environment would be better if Time had stronger answers to units with Flying. The previous incarnation of Kickflip Monk was too weak against control to consider even with Inscribe, and we hope this version is a bit more plausible against a range of opponents. Cloudscraper is a significantly different design, but given our goals and how much we like the play of this card adding functionality was more appealing to us than finding another option or waiting to design a new card. 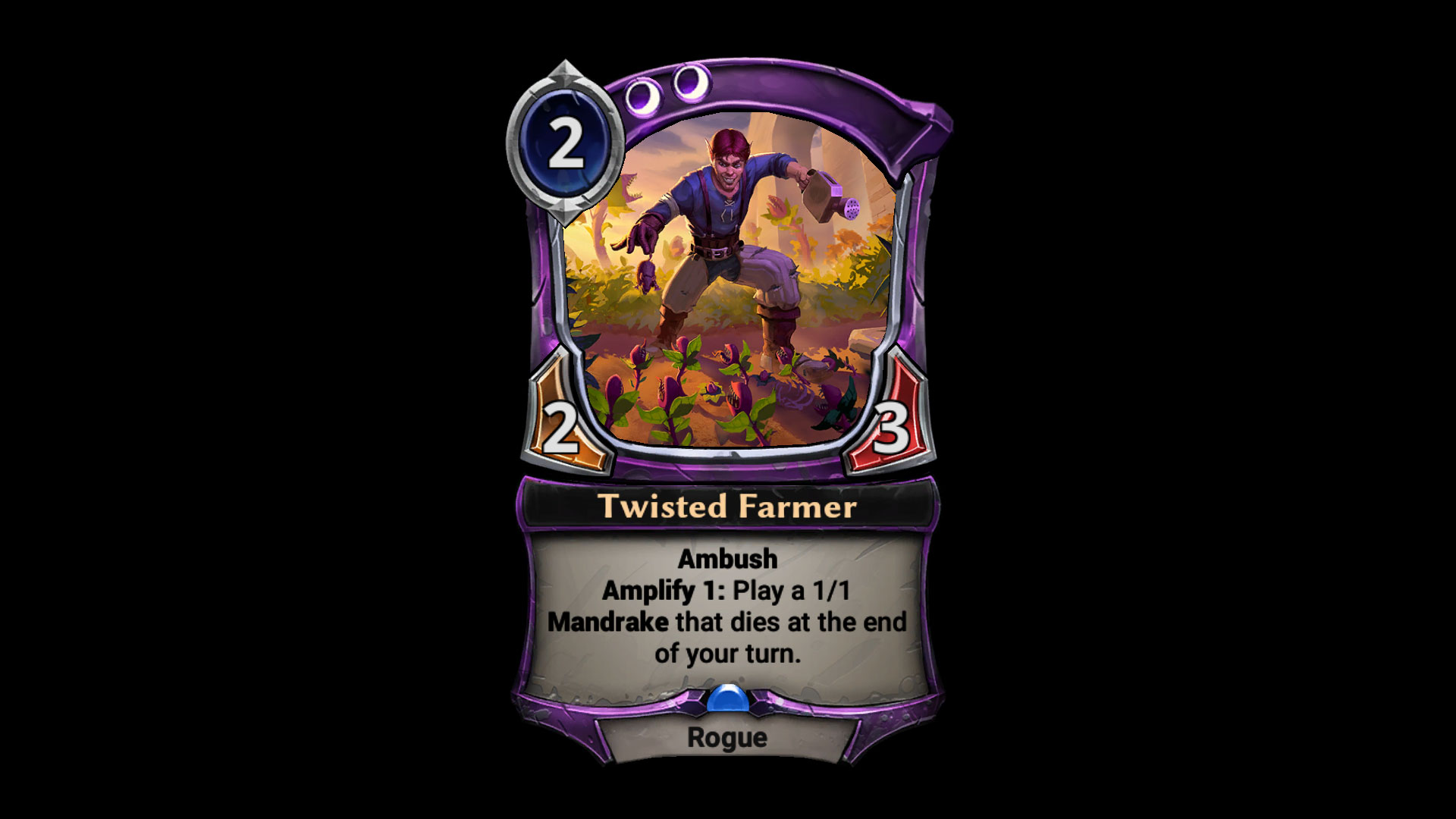 .Twisted Farmer is a dynamic, tactical card. We believe in cards that create dramatic swings and unlock unique interactions, and Twisted Farmer’s mix of abilities does exactly that. With a second point of strength, we believe this card has a lot of room for competitive exploration, either on rate or as a synergistic piece. This is not a frequent combination of stats and skills for a cheap Shadow unit, and so the second pip is intended to slightly increase the opportunity cost, much like the change to League Explorer. 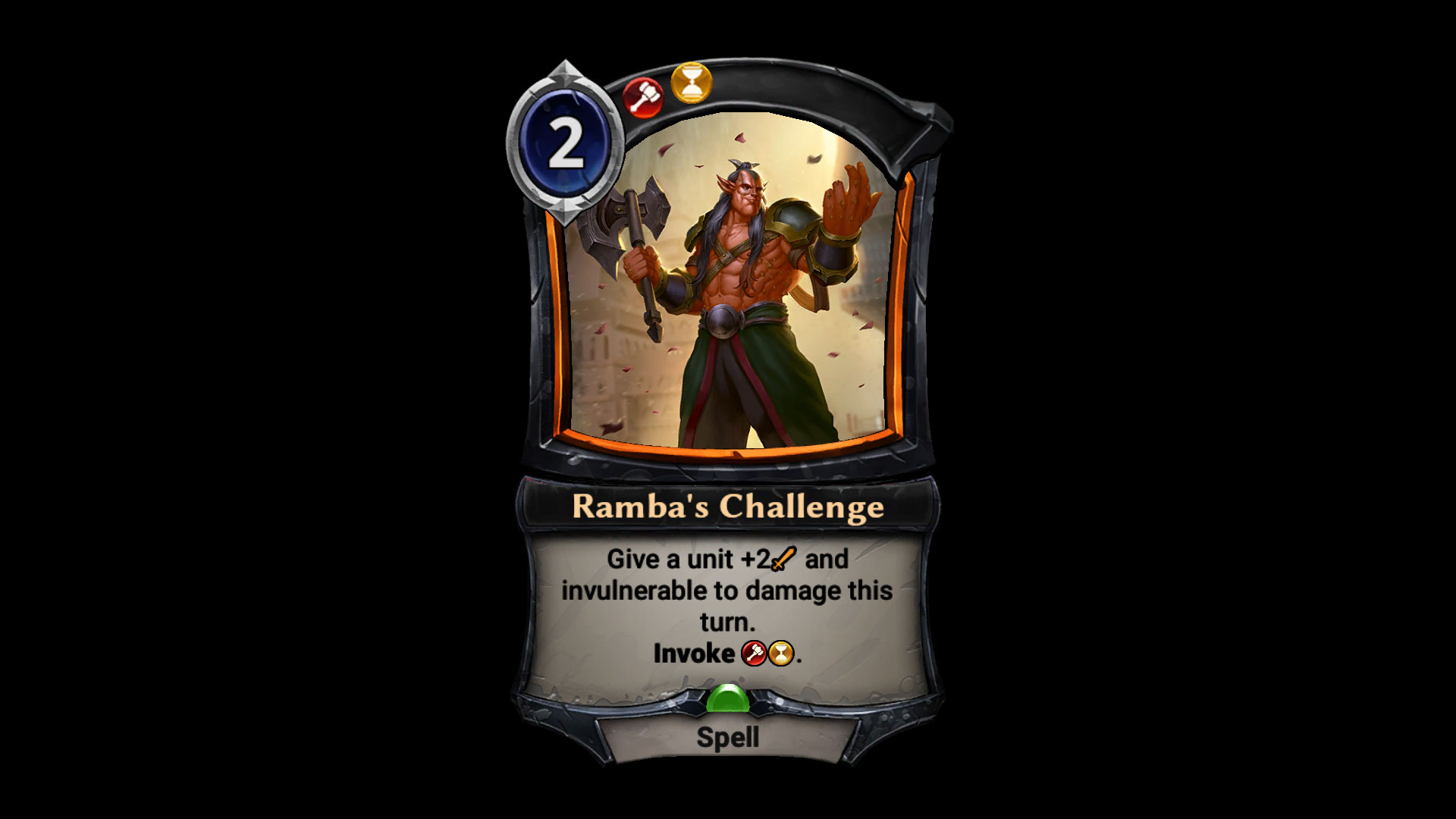 We’d love to see more Invoke generally, and non-fast pump spells have a habit of facilitating quirky cards and decks. The previous version of Ramba's Challenge wasn’t even that strong in draft; we feel like we have some room to give here. 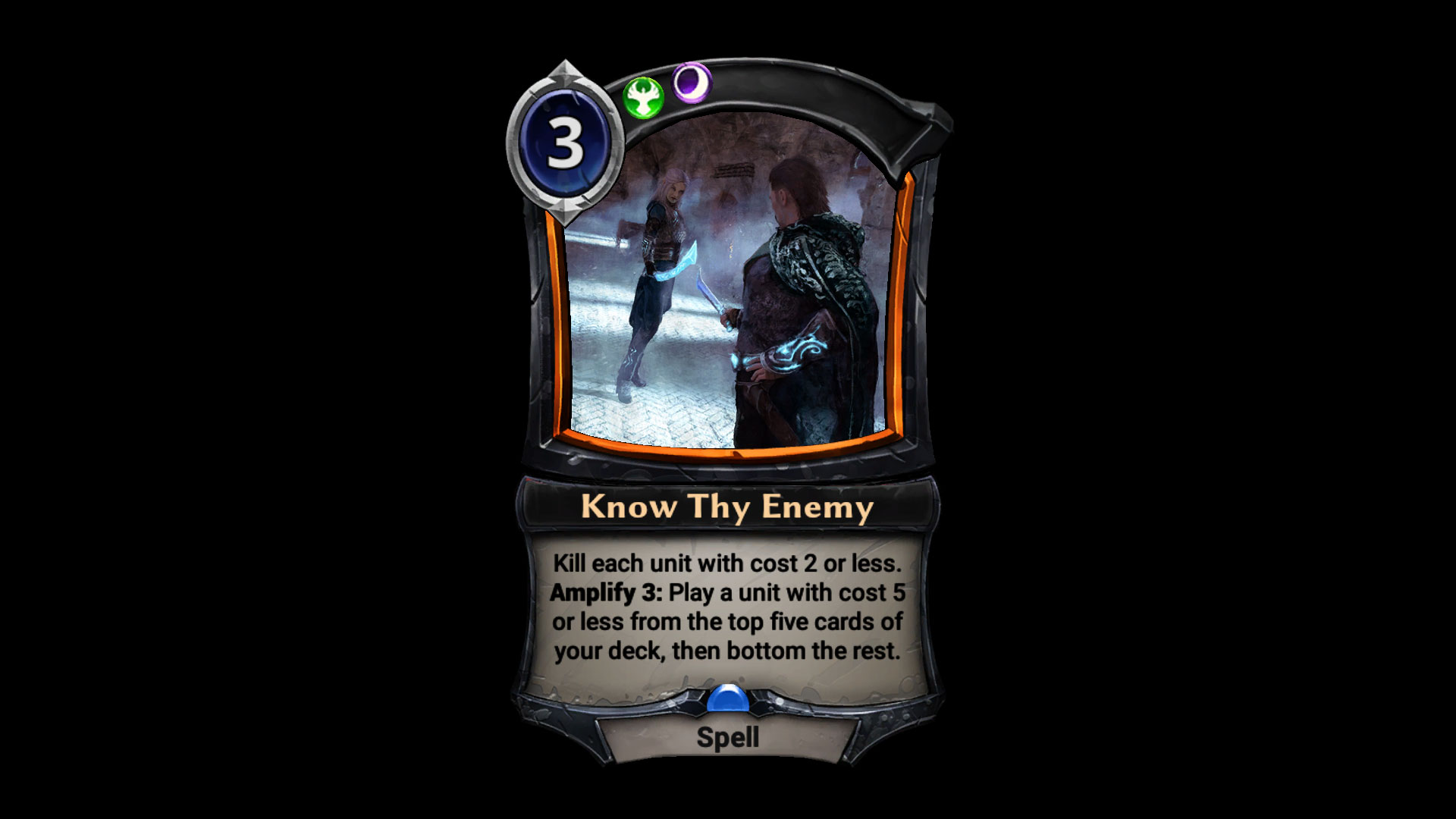 With Nothing Remains as part of the mix, we believe Know Thy Enemy is more interesting to consider if it’s more powerful at attacking specific opponents, and the multi-amplified experience of this card isn’t great. We hope to give this card a more targeted purpose, and less of a way to arbitrarily win long games. 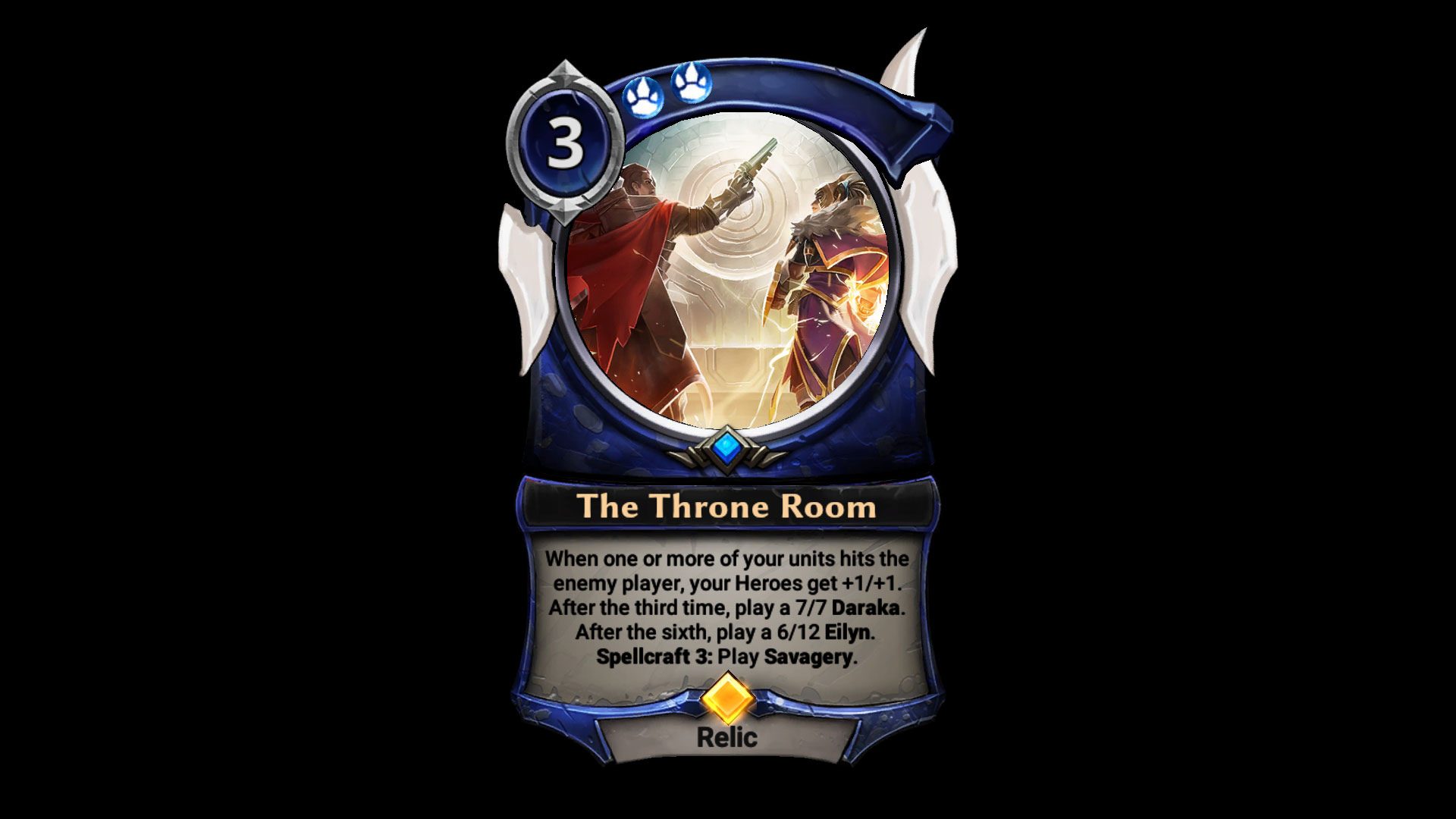 Powerful, build-around Relics like The Throne Room that require multiple turns and game actions to come to bear are great; that’s much less the case on a card so good at protecting itself. We believe the Hero callout is thematic and fun, while allowing more satisfying opportunities for opposing interaction.

Below are the various unambiguous buffs, in no particular order. Please enjoy, and thank you again for your continued support of Eternal.

.Argenport Sewers – Now “Your Rats and Rogues have +1strength”. (was “At the end of your turn, if you have three or more Rats, sacrifice Argenport Sewers.”)

.Star-Reader Severin – Now “SSS: When you play a relic, play Severin from your void exhausted with +1 strength.” (was “SSSSS:…”)

.Dawnwalker – Now “TT: When you play a unit with 5 Strength or more, play Dawnwalker from your void exhausted” (was “TTTT:…”)

Thanks for playing Eternal! And don’t forget to sign up for the Dire Wolf Newsletter to get a free Eternal pack every week and stay informed on all the latest updates!