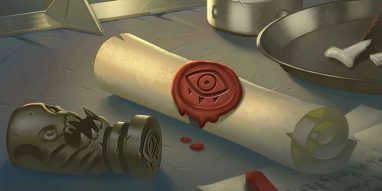 Insignias: Changing the Balance of Power

Dark Frontier is bringing over 200 new cards to Eternal in a matter of days; and dozens of new cards have already been revealed, enabling fun and exciting new ways to play. Today, we’d like to talk a little bit about the power cards of Dark Frontier, and what they help make possible.

Five of Dark Frontier‘s eleven power cards are part of a cycle of Insignias, providing fast and reliable influence-fixing, as long as you are devoted to one, and only one, of the two-faction alliances.

We believe that change is a crucial component to making Eternal fun and re-playable. Eternal‘s previous major release, Defiance, was loudly built around five three-faction combinations, and part of supporting these combinations involved extra support for the five overlapping two-faction alliances. We wanted to provide new tools for those other five alliances that were not as heavily supported in Defiance, pushing things in the other direction.

Some of you have speculated that Dark Frontier would be another three-faction set. We wanted to explore the possibilities at a pace that makes the sets focused on three-factions feel special. We knew early on that we needed to follow Defiance with a set going in a very different direction. 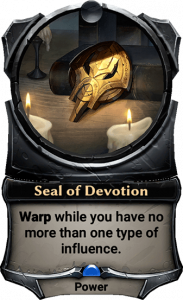 Mono-faction strategies have been among the least supported and most requested strategies in the Eternal’s history. The previously previewed Seal of Devotion is an example of such support, and you’ll find that there is a little higher than usual number of high influence mono-faction cards in Dark Frontier. 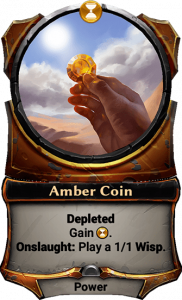 As mentioned above, Dark Frontier features eleven power cards, and the remaining five are a common cycle of mono-faction Onslaught power cards. These cards give additional support to mono-faction strategies, while remaining potentially effective in decks with two or more.

Eternal will absolutely see three-faction cards in future releases, and we will surely revisit the other five three-faction combinations. If things were too predictable, too formulaic, they would get boring. Instead, we want to push things in a different direction with this set, and we’re excited about what Dark Frontier brings to the game…

…That said, some plans need to be seen through to the end. While Dark Frontier is a wild and new world to explore, there was one component of Defiance we knew we needed direct follow-up.

While it was important to make sure Dark Frontier has its own identity, Markets play too important of a role right now, in both casual and competitive Eternal, to leave unbalanced. The Market mechanic is one of the most powerful and revolutionary mechanics in Eternal, and while we’ve only just begun to scratch the surface of what the mechanic can enable, we felt it was important to first establish a baseline across all factions and two-faction combinations.

With Dark Frontier just days away, everything is about to change. Not everyone realizes how dangerous the Shadowlands really are…