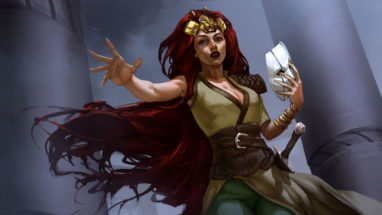 Major spoilers for the Hour of Glass campaign are below.

If you haven’t played it yet, go get Hour of Glass now!

Talir clutched the Queen of Glass close as the light of life faded from her gaze. The floor of the Speaking Circle suddenly felt extremely cold.

The finality of that single word, that single statement, held the world still and silent for a long while. Talir forced herself to breathe as she laid her future self down. A vision of herself now gone, a mirror of a path she now had to avoid at any and all costs.

She got to her feet and held the Queen’s mask in both hands. She closed her eyes and reached out for the magic that dwelled within it: the power her other self had siphoned into it during the entirety of the failed attempt to stop Azindel. So many lifetimes of effort and ambition all culminated into the unknowable energy stored within.

The number of dead in all that time, the suffering. All of it unpreventable in this reality.

A tool of destruction and desperation would now be her only avenue to salvation. She activated its power with a singular focus. In seconds, a portal ripped through the fabric of time before her. She attempted to guide the portal’s flow of time back. To home. To the Myria she knew.

She watched the portal swirl. Flashes of moments in time came to her and she reached out to sense them, survey them. She would need to return to the right moment to set things on a new course, a new path.

“I struck down the gates of Argenport with a single blow. You will not survive this storm. Yield.” came a voice she recognized. Eilyn. Talir’s brow furrowed as she focused on that moment. A sense of foreboding hit her as she noticed someone else.

.Kaleb, sword drawn, ferocity personified. They were fighting over the Throne. Whatever the outcome, Talir presumed the conflict would aid Azindel’s scheming in some way. This was when she needed to return. To make right what would be.

Talir took a breath, tightened her grip on the mask, and stepped into the past.

Warm desert winds swirled around a single point of white light that glinted at the center of a quiet, peaceful office. The light expanded and shimmered as it shifted into a humanoid form. It dissipated and in its place, Talir stood.

She took a long, labored breath. The air that entered her lungs stung with heat. She sensed the foreign touch of something else with every breath. Then realization struck. It was the magic of the Praxis Arcanum. The hint of something that had been so familiar for so long now came to her like a distant memory.

Of the past? From the future? she asked herself.

She shook her head and took a step forward then brushed away a strand of white hair. A physical reminder of the change from the magic of the mask and the Waystones. A reminder of her new charge. She leaned against the ornate chair of the Arch Magister’s desk. Her desk. Something so recent yet so very, very far away. She clutched the back of the oak chair like driftwood in a dark maelstrom.

Her own words from just moments before came to her as she set the Queen of Glass’s mask on her desk.

It faced her with its vacant eyes, unyielding. Not unlike the shocked and enraged faces of her family still squabbling over the Throne.

So much to do. My initial warning likely only caused questions… she thought. She had one certainty. Herself. She had to do this for her timeline. She had knowledge. She had time to plan.

She had to stop him.

She ran her fingers against the smoothness of the artifact then looked beyond it. Documents that still needed review sat idly, undisturbed. Trinkets from previous travels lay in a decorative display. Books lay open and spell scrolls sat unfurled, half researched, yet both beckoned to be read.

The one place in her world seemingly untouched by time beyond a simple march forward.

“I’m… home,” she whispered, then took a seat at her desk.

The statement brought both comfort and unease mixed together in a tight ball deep inside her. Here she was not a lost traveler thrown into a doomed world. A doomed world she had barely escaped. A darkness that loomed somewhere in the depths of time yet to come.

Her thoughts drifted as she surveyed an hourglass on the desk. It held the mark of the Arch Magister of the Praxis Arcanum. Master of the Arcane Arts.

“And the Queen of Glass,” she said with another touch of a finger to the mask. She picked it up, turned it around in her hands. Beautiful craftsmanship, elegant design, efficiency in its function.

Her grip tightened on it as she scowled at those empty eyes. She had clearly failed once before, how could the next attempt be any different? How could she convince her family, her people, to thwart Azindel’s schemes?

She took in a shaking breath and forced out a more steady exhale. She reviewed the mask a second longer then looked over the work of her past self. Analysis into Caiphus’ disappearance. Sketches related to the Waystones. A small piece of a Waystone from just before-

She squinted at the fragment of yellow stone then turned the mask over. Embedded above where the mask lined up with the forehead sat a glinting stone. Yellow, small. Shaped exactly as what sat upon her desk.

She admired the two stones, one inert, one shining with a touch of power. The beginnings of the Queen of Glass had resided in her, even then.

The hazy swirl of time and its flow caused her brow to furrow a moment, the passage of what had been, what would be, what could be.

“There is so much to do. The only thing left to do… is begin,” she said aloud. She clutched the inert Waystone piece and tugged at it. It came easily enough and in a moment she had replaced it with its past self.

“I will try again. I have time. I have knowledge. I shall do this for myself. I shall succeed. For us,” she said to the mask. The vision of her future self perishing rushed to her. The weight of time, of what lay ahead, pressed against her. She let out another steady, determined breath. She would pour her entire being into this cause.

She considered the mask for a long moment. Beautiful, elegant, efficient. She slipped it onto a latch at her belt.

Something never to wear but always something to remember.

She was not the Queen of Glass.

She was Talir. Arch Magister of the Praxis Arcanum. Master of the Arcane Arts.

During the quest period, your first PvP win of the day will reward you with a copy of A New Beginning!

Once the promo period is over, you’ll be able to craft the card using Shiftstone as normal. 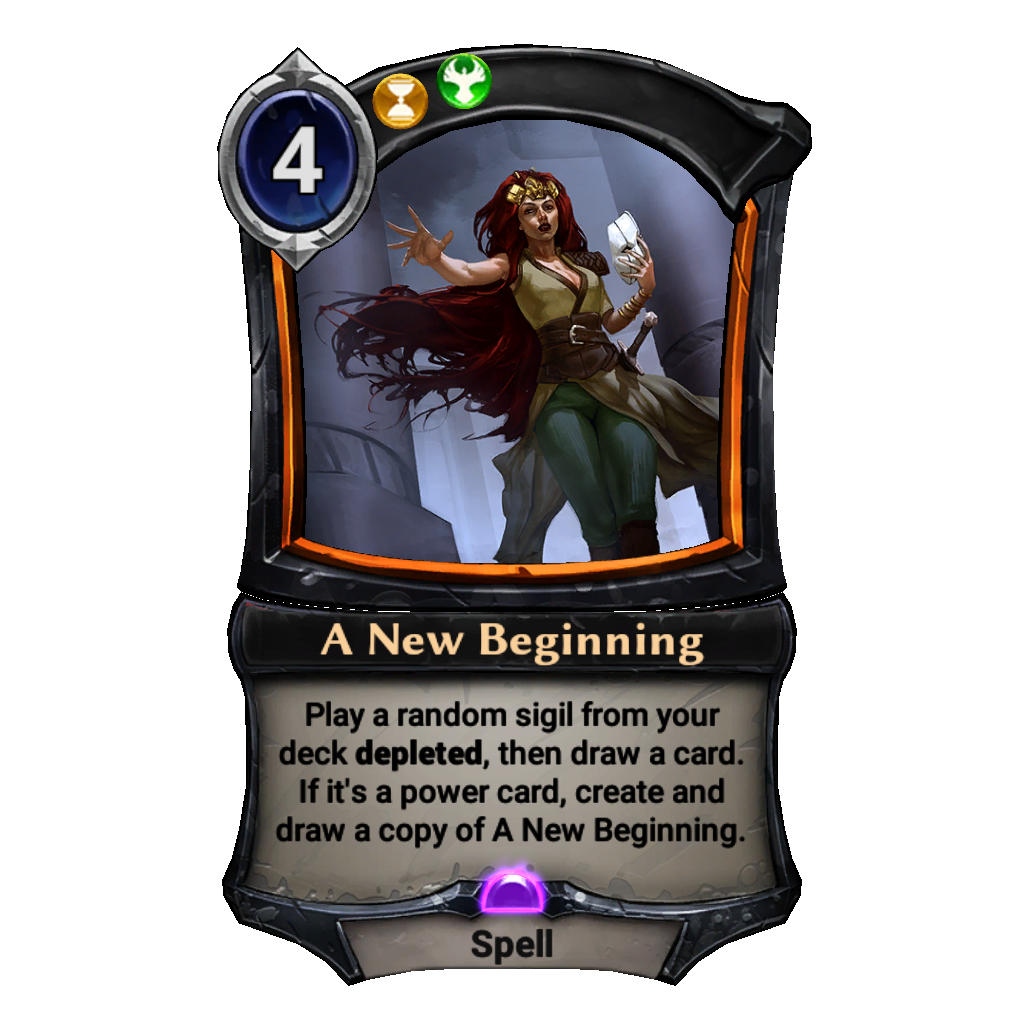 The New Beginning premium Avatar will be available in the store for 300 Gems for a limited time.

The New Beginning theme deck will also be available in the Store for 500 Gems for a limited time, and includes the avatar and 4 premium copies of the new promo!