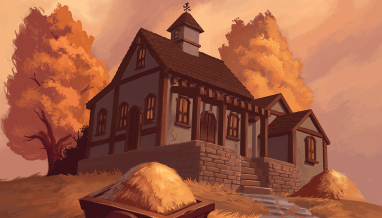 The forges of Shavka burned through the night. In Grodov’s arena, gladiators trained, steel ringing not in single combat, but in ranks, fighting together. And on the high peaks, the shamans of Linrei pooled their knowledge, summoning storms that shook the sky.

In the jungle, hunters of Makkar honed their aim, cutting down any cultist foolish enough to wander alone. Across Xulta, the travelers of Kodosh went from city to village, carrying the Listeners’ words: The dragons and their cult are gathering. The nightmare that whispers to them all is seeking something. We cannot let them succeed.

Sol was fading; each day darker than the last. With voices raised to their Ancestors, Xulta prepared for war. 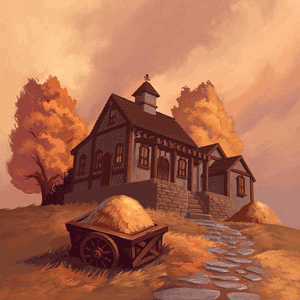 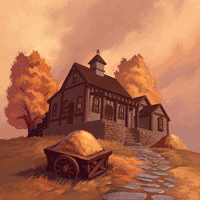 The farm was on a large plot of land out on the plains. Here, the prairie winds blew without end, and on a clear day you could see the neighboring homestead—a small, white plume of smoke on the horizon.

The farmhouse had been a proud thing, once. Two stories, with a brass weathervane on top and a separate stable for the horses. Nothing grand, but he and Dara had built it together. The icy winters and endless winds had not been kind to the structure in his absence. As Horus Traver rode across the weed-choked fields, all he could see was a warped and rotting frame. By the time he arrived at the sorry skeleton of a house, he was gripping the locket so tightly in his hand that the cheap metal cut into his palm.

He shook his head, trying to dislodge the buzz of many thoughts. Voices, almost like his own. They were always with him now, and he was always with them. We are Horus Traver, he thought bitterly. Azindel had taught him that. Azindel, who had been with him every step of the way, until an umbren with his deep voice stood by Caiphus in the throne room. Traver had been too focused to recognize it at the time; only a sword’s length away from the man that had damned his family.

The thought had kept him going, limping through the jungle after the Throne had cast him aside. He and his brothers were lost, separated. Caiphus had won. What good was their vengeance now? 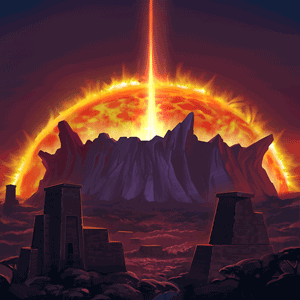 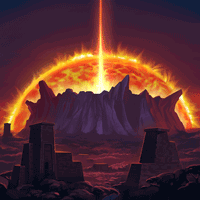 The light of the Throne had been followed by darkness and pain. After what felt like ages, Traver had awakened beneath a large, red sun that he did not know. Grimacing, he had pushed himself to his feet and looked around. The Throne stood less than three paces away, tinted by the crimson sunlight. But instead of a throne room, it stood in the center of a large crater of cracked and barren earth.

He reached out to touch the Throne. The stone was cool and inert beneath his palm. Whatever power Caiphus had commanded did not respond to him. He scowled, raising his head to look around.

I need to get my bearings.

Nothing stirred in the crater as Traver slowly climbed up the rocky rim. As he did, he saw boot prints in the dust, and the mark over his eye began to ache. Had some of his brothers survived? Outside the crater, he found himself on the summit of a vast plateau. Far below, its slopes faded into mist and verdant jungle foliage.

Definitely not Argenport, Traver thought, and his throat burned with thirst. He couldn’t stay here. With a last look at the Throne, he turned and began to descend.

Down in the jungle, he stumbled through a land that he did not recognize. Strange beasts flew overhead, silhouetted against the angry sun, and the plants themselves lashed out at him. The Throne’s light had scattered the strangers, and for the first time in a long while, Horus Traver was alone.

What do I do? He thought. As he stared up at the sky, he felt a faint weight in his pocket and pulled out a small, dented locket.

Dara. Lily. The portraits were faded, but they had survived.

I know where I need to go. 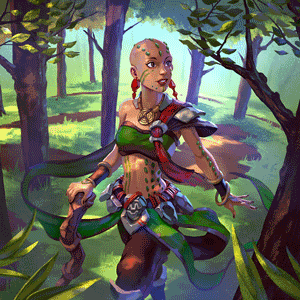 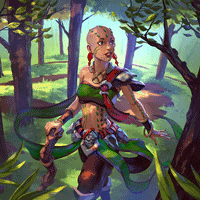 Some time later, he crossed paths with a figure in unfamiliar dress. She wore bright green robes, and her arms and bald head were lined with gemstones. Though she walked with a cane, she stood tall, and held Traver’s gaze without fear.

“You look far from home, stranger.” The language was not his own, but one of his brothers spoke it, so Traver spoke it too.

“I am lost,” he admitted, his voice gravelly from disuse.

The monk smiled. “Where are you going? And what is your name?

“Home,” Traver said. But where is that? he realized. Back to the Shadowlands, where Azindel remade me, or to an empty, infested farmhouse?

“And you can call me…” he paused again. Would his name mean anything here? After everything that had happened, it barely felt like his name. “Varret,” he lied. “My name is Varret.”

“Well, Varret,” the monk had said, pointing southwest with a tattooed hand, “the nearest city is a week’s journey in that direction. From there, your path is your own. May the winds of Kodosh take you where you need to be.” 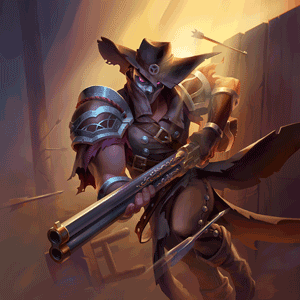 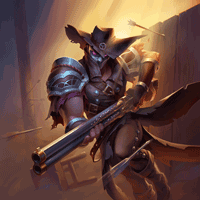 The prairie breeze whistled through the husk of the farmhouse.

It had been a long journey back from Xulta. He had learned much, and been forced to fight for his survival. Not as Horus Traver at the head of a legion, but as Varret, a lone, cunning wanderer. His travels had drawn him from the jungles and cliffs of Xulta, through the tall grasslands, and into the Shadowlands. They had twisted and shifted as he rode, but Azindel had guided many strangers through the Shadow, and Horus remembered all of their journeys. After months—or was it longer? —he found himself at an abandoned homestead, listening to the wind.

What had driven him back here? The memory of Azindel, whispering in his ear. “You could have everything. Redemption. Vengeance. Peace.”

“Lies,” Traver said out loud. Azindel had mislead him; stoked his anger and used him to remove Caiphus from his Throne. Azindel had never cared about Traver’s loss, not in all the time they had spent in the Shadowlands. He could still see the satisfaction on the umbren’s face when Caiphus had called on the full might of the Throne. That had been his goal. But Dara and Lily were still gone, no matter what came after. This place proved that.

The other versions of himself shared that grief, but those that had survived the throne room now wandered across Xulta and beyond. The echoes of their thoughts in his head were faint.

What is this? A sudden whisper tore through his mind, sharp and eager.

He flinched. Above him, the sky darkened, and the shadows cast by the desolate farmhouse lengthened. From the corners of his eyes, he could see twisting shapes. Whinnying with terror, his horse bolted, fleeing across the field.

What a fascinating mind, the shade whispered.

Distantly, Horus could hear one of his brothers screaming. Somewhere far away, another version of him was dying. Anger made the scar over his eye burn as he drew a heavy shotgun from his saddle. “What do you want?”

The thing in the shadows turned. Are you the center of this web? The whispers were louder now. When Traver didn’t respond, the thing laughed. You have witnessed the Throne’s power, yes? Your… friend died before I learned its location on Xulta.

Horus fired. The slug tore through the wall behind the shadow. “Get out of my head. Get out of all our heads.” He could feel it now, a presence in his thoughts.

You have seen so much, the nightmare hissed. Where is the Throne?

The pressure inside his skull was strong. Traver gritted his teeth. “No. I’ve seen what it can do.”

The shadows grew darker as the nightmare redoubled its efforts. Pain lanced through his head. You are nothing. You are nobody, Horus heard. You will tell me.

Horus barked out a laugh. Slowly, gritting his teeth through the assault, he raised his gun. “My name is Horus Traver, and I am not yours to manipulate.” He fired again, the shot piercing the nightmare’s flank. It snarled, and Horus stepped forward, switching the gun to one hand so he could draw a short, well-worn sword.

“Did you follow me from Xulta?” He demanded, raising his voice over the moaning wind. As he spoke, he remembered his first moments in Xulta, high on the plateau. 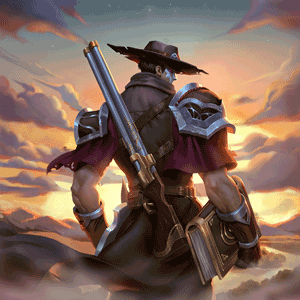 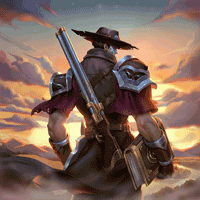 Yes! The whispers crowed. The Throne on Sol’s Altar. I see it!

Traver cursed, charging forward. But the nightmare was already fading, laughing as it retreated, until he was alone again, standing in the ruined farmhouse.

No! He would not be used like this again. Horus looked down at the locket, still clutched in his hand. That thing would come for the Xultan Throne. And it wouldn’t care what lives it tore apart along the way. Carefully, he slipped the locket back into his breast pocket, and picked up his still-smoking shotgun. The nightmare had been in his head, and it had already killed one of his brothers.

It will take others, Horus realized. I… we have to stop it.

Gathering his will, he reached out across worlds. If he was going to Xulta’s aid, he would not be doing it alone. 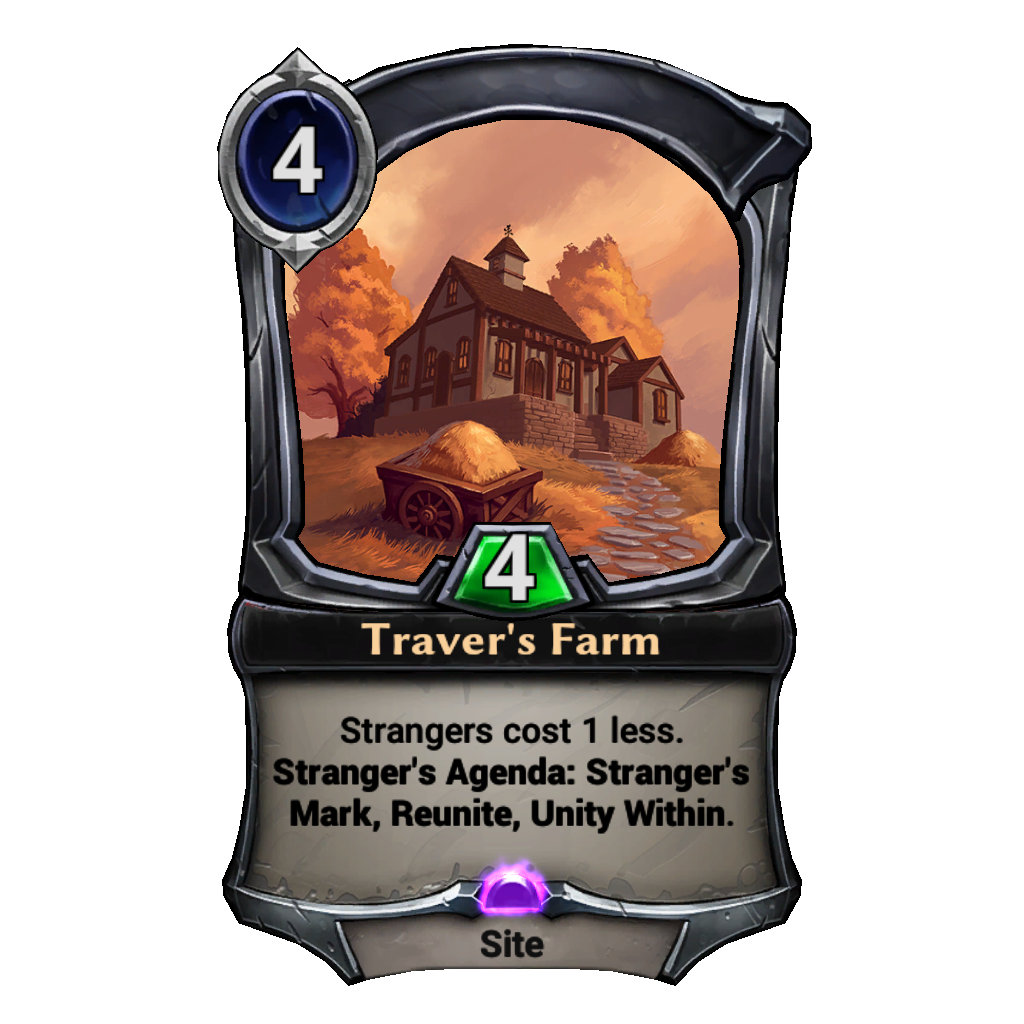 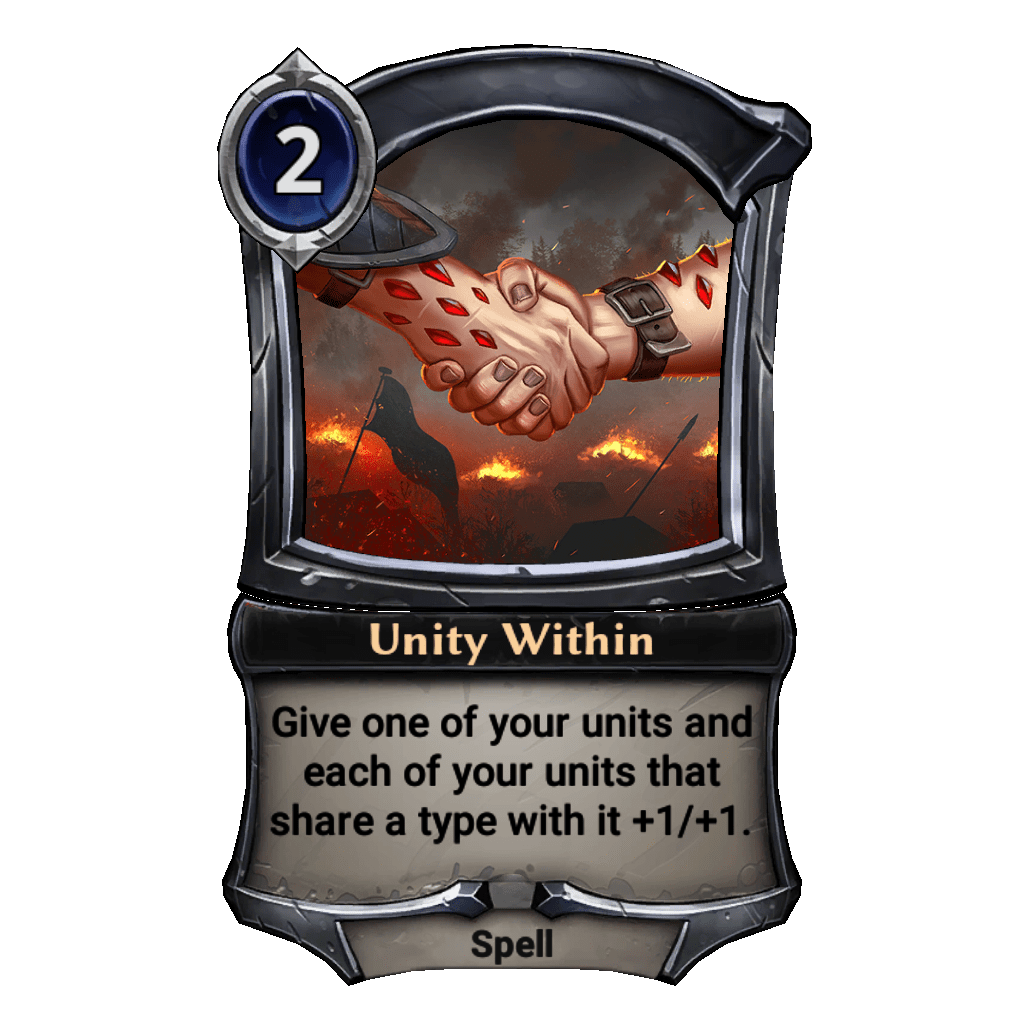 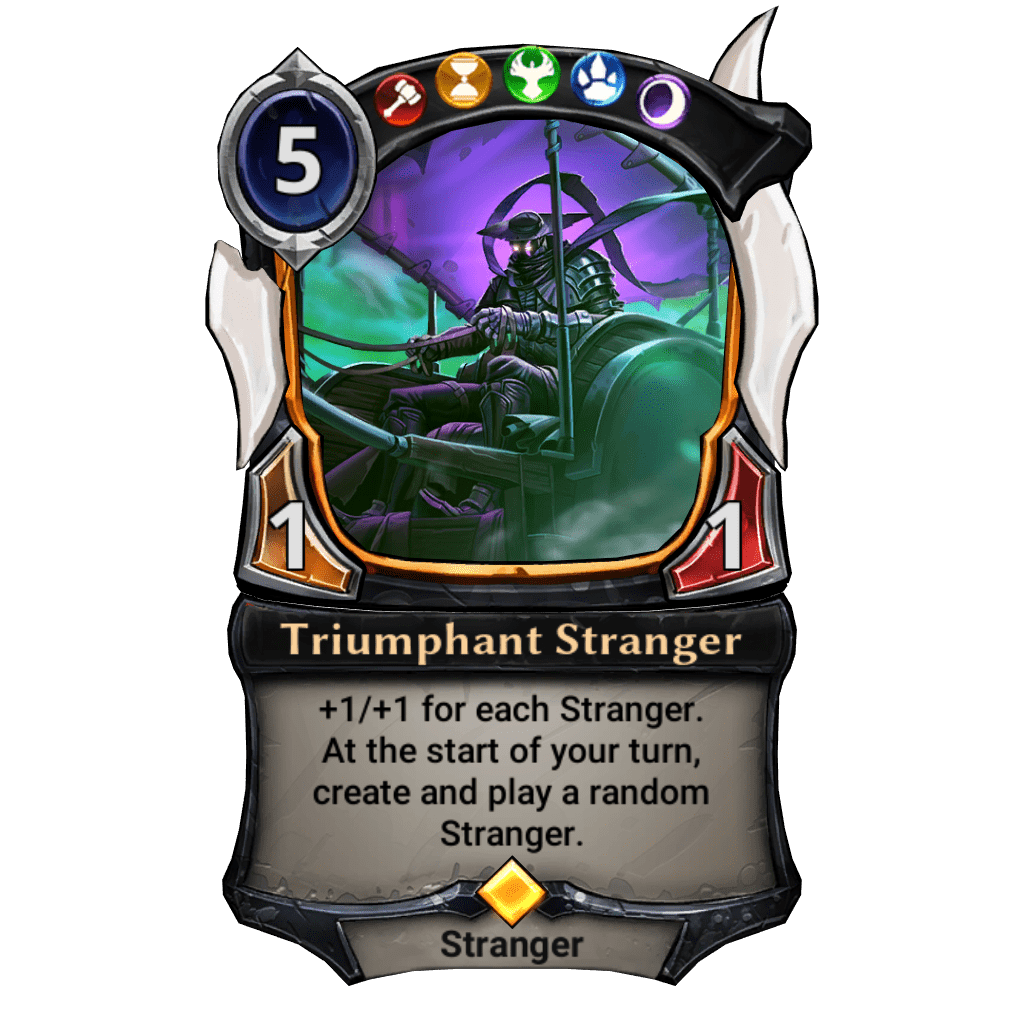 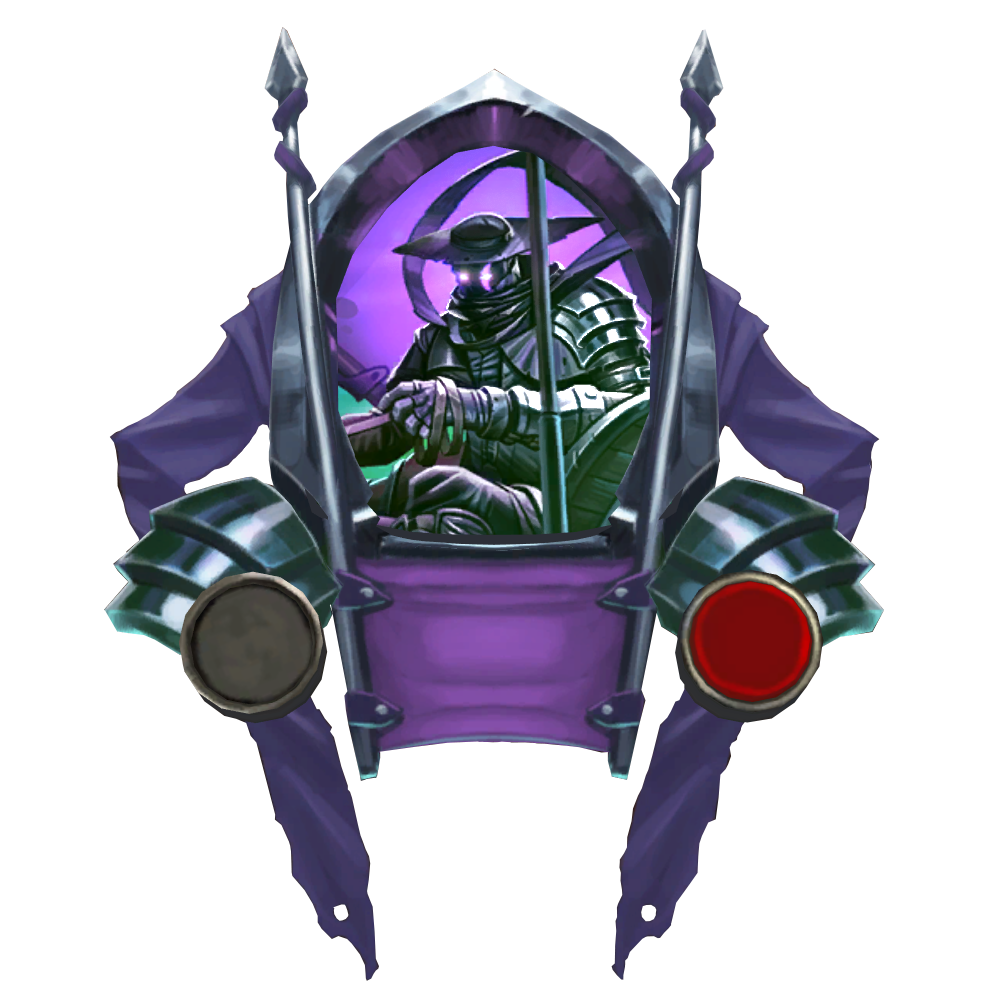 When this promo goes live, Varret, Hero-in-Training and his transformations will be updated to the Stranger unit type.