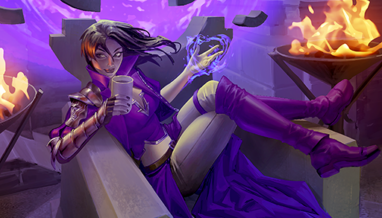 .Vara appeared far more relaxed than her thoughts allowed her to be. She took a slow sip of her drink. It was hot and off-putting. It had grown warm in the discussions, debates, and disagreements of the day. Vara closed her eyes and set the mug aside. It would not bring her comfort.

She looked over the throne room with a contemplative eye. She found her grip at the Throne’s armrests tight and menacing. The smile she had held at the day’s final negotiation had faltered half an hour ago. The day was done, her duty completed.

She leaned forward and looked down the steps from the Throne. The room held the tight embrace of pain from the past.

How long ago had her mother and Kaleb fought? Only the chance interruption by her aunt had stopped them from destroying one another. A plea for unity and a cryptic warning of danger. Had it really been that long ago? Vara shook her head and tried to refocus her thoughts. She hadn’t even been there. She’d run.

She pushed back against the Throne as the flick of flames on either side of her cast dancing shadows. Vara’s brow furrowed as the past came too easily to her once again. Once more so recent yet so far away. The Throne’s power, twisted by Eremot’s conniving with her just a captive from its insidious schemes. But she had escaped and defeated the nightmare… That much she was glad for.

Yet again she’d been a captive to another’s whims and schemes, just like with Azindel. Always tugged along by the aims of another, her desires not truly considered.

Her hands balled into fists of rage and frustration. Even when she had sought her own path-

“Vara?” a gentle voice cut into the firestorm that threatened to engulf Vara’s entirety.

“Wha… oh, Talir, it’s you,” she said and shoved the thoughts away in favor of that previous smile. “Do you need something?”

“In a manner of speaking. Won’t you join me in the garden for some tea?” Talir responded with a smile in kind. Vara felt it was far more genuine than hers.

“Well, I’ve a drink already here,” Vara started and was met with a dismissive hand wave.

“I’ll see you out there shortly,” Talir said and left the throne room.

A soft breeze mixed with the hint of rose petals brushed through the royal garden. Vara clutched a new mug of cool strawberry tea. She gave it a curious sip and smiled despite herself at the taste. The wicker chair she sat in felt cozy.

“I want to talk about something related to Azindel,” Talir said with a measured look to Vara. Vara’s refreshed smile faded and threatened a scowl.

“Why?” Vara said flatly. A flash of his face came to mind despite Vara’s best efforts and she forced herself to let that scowl through. Would her life always be plagued by him?

“I-” Talir started and Vara watched her look off toward a cluster of blossoming roses. Lost somewhere in time. Somewhere far, far away. Again.

“I have information that he may be making a move. Something that we need to stop. You’re, of course, one of the only people I can trust,” Talir finished after a beat.

Vara sighed and took a long drink of her tea. It was still cool to the touch and delicious, but it had lost some of its soothing power. It was always something.

“Do you know where he is? How to destroy him? What his new scheme to ruin our lives might be? If this is just some vision from some far flung time…” Vara said and looked to her aunt forlorn.

“You want something from me?” Vara continued. “Everyone does. I wield the Throne but I feel like I have no say in my own path… even now after the Shadowlands, after Azindel, after father…” she paused a moment then continued, “after Eremot.”

Talir moved to put her hand on Vara’s and gave it a tender squeeze.

“I’m not telling you Vara, dear. I’m asking. For the good of everyone, yes, but… this may be of help to you,” Talir told her. Vara didn’t pull away from her aunt’s touch but another sigh came.

“I know all too well, in my own way, the malevolence of Azindel, just like you. I promise you that. I believe he may be plotting something involving the Waystones,” Talir continued. Vara listened carefully, curiously.

The massive stones of raw magic power, Vara remembered them in the Shadowlands most vividly. What could that monster need with them? Vara shook her head. Revenge against Azindel and what he’d done to her could be better served by whatever her aunt would propose, surely.

Vara closed her eyes and focused on that caring touch. Vara and her aunt had never been incredibly close, but the comfort and concern was real. She felt the constant rush of anger fade.

“I would not ask you if I had another to call upon, you’ve already done so much. I’m sorry,” Talir said quietly.

Vara wrapped her fingers around Talir’s and gave a reassuring squeeze in response. She clasped her other hand around her tea mug before she spoke. Talir was not Eremot. She was not Azindel. She was an ally. She was family.

“I appreciate your concern, really. What do you need?” Vara said. She noticed Talir relax in her chair and grinned some.

“Tenacity against your own emotions, like your father,” Talir said and laughed a moment.

“I need you to investigate the Waystones around Myria to ensure nothing has happened to them. I would go myself, but I need to research their powers at the Arcanum. I can speak with your mother and brother to tend to things here in your absence,” Talir said.

Vara nodded. Simply look after the Waystones? What was Azindel’s ploy that Talir suspected? Something long term, knowing the two of them. Vara finished her tea. It tasted cold. Eilyn and Kaleb ruling without her? She hoped she wouldn’t return to another duel. Or worse.

“I’ve heard wind of pilgrims from Xulta, thanking the Waystones as they pass by,” Talir continued. “I’m not sure if they’re in league with Azindel but… I think it’s best to be cautious and look into them.”

“All right, and is there a preferred starting point then?” Vara asked.

“Yes. With the strife to the north, I think it’s prudent to check the Waystones there first,” Talir responded.

“Off to Kosul then? I’m sure Svetya will be overjoyed to aid us,” Vara said with a hard laugh. She remembered well how the previous conversations with those in power in Kosul had gone.

“Alliances can be rebuilt one piece at a time,” Talir replied.

During the quest period, your first PvP win of the day will reward you with a copy of Vara’s Authority! Once the promo period is over, you’ll be able to craft the card using Shiftstone as normal. 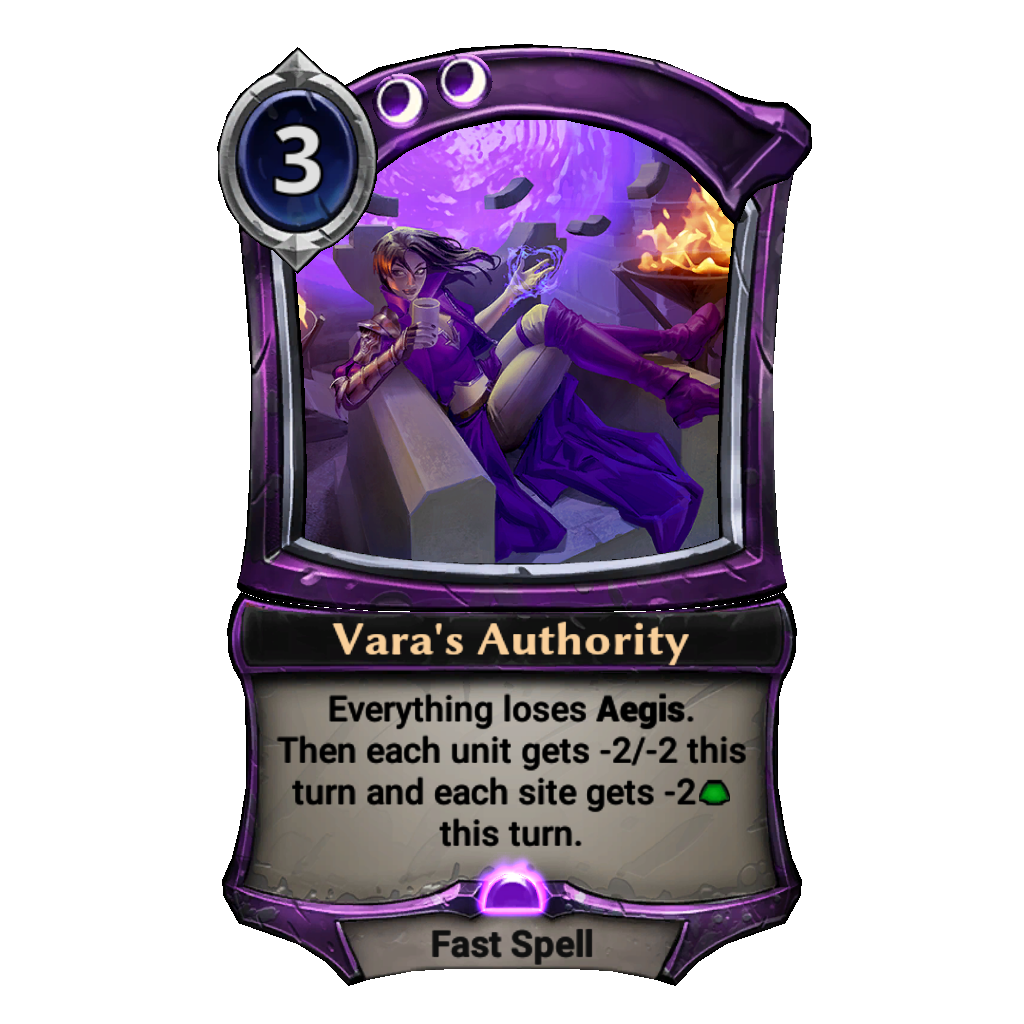 The Vara’s Authority premium Avatar will be available in the store for 300 Gems for a limited time. 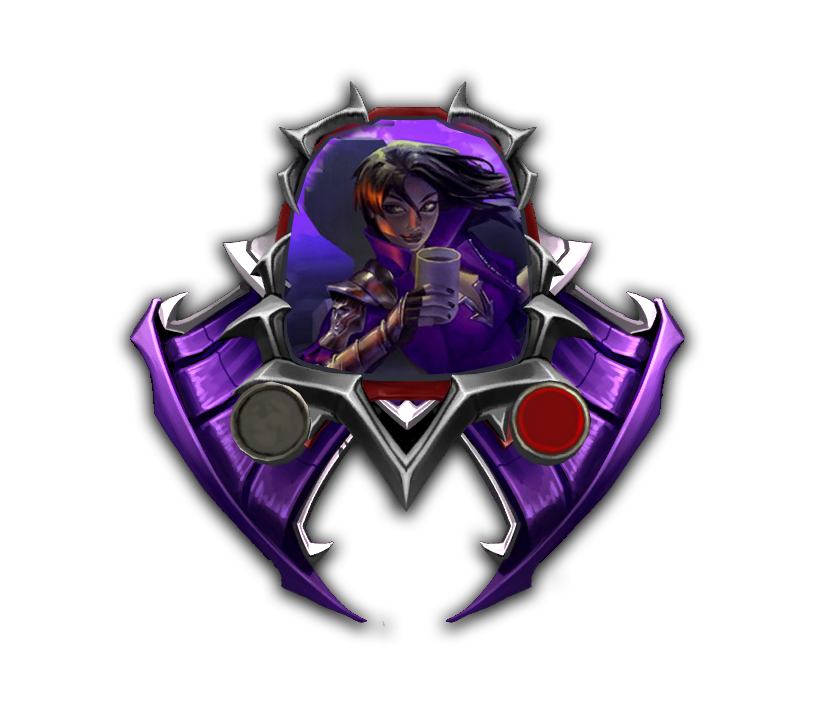 The Vara’s Authority theme deck bundle will also be available in the Store for 500 Gems for a limited time, and also includes the avatar and 4 premium copies of the new promo!