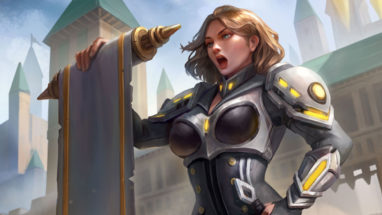 Preparing For The Empire Of Glass $5K Draft Open 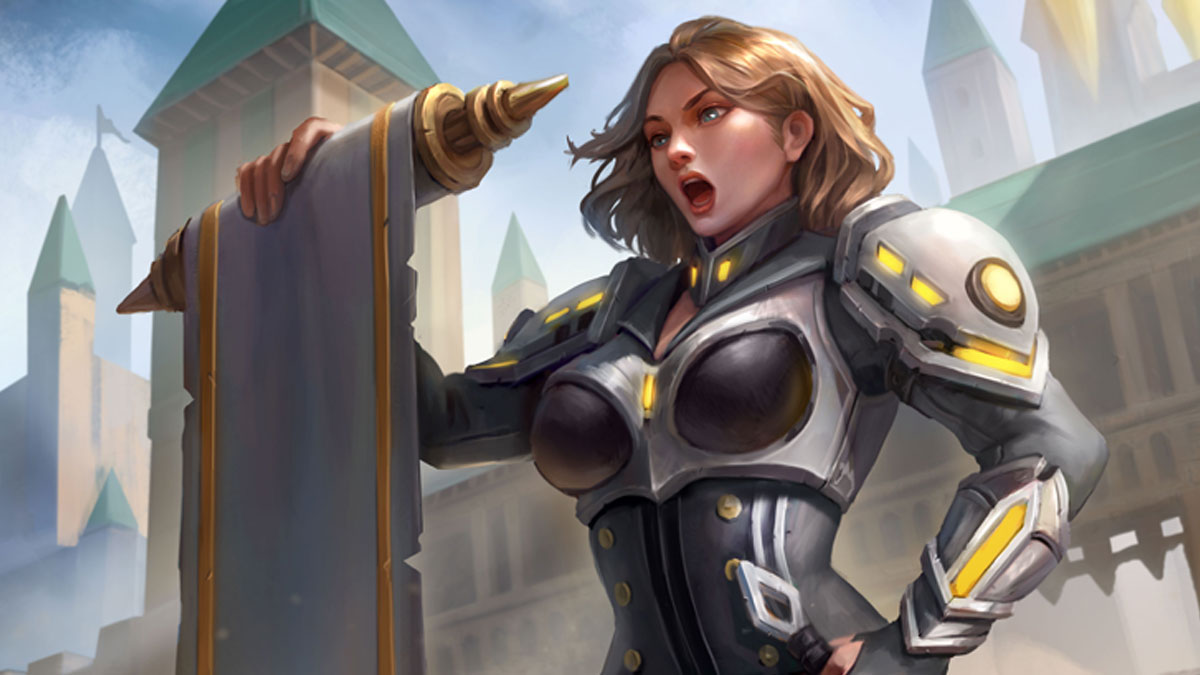 Welcome back! We’ve got another exciting event coming up with the Empire of Glass 5k Draft Open running Friday April 30th through Sunday May 2nd where the winner will join what’s starting to looking like a pretty stacked 2021 Worlds field. To help players prepare for the event this weekend, we wanted to provide a quick overview of the format to help get you up to speed so you can join them!

New to draft? No problem! Here’s a quick primer on how things work: First, you’ll be given a pack of Empire of Glass to open and select one card from it to start your deck. Then you’ll pass that pack to another player and receive a new pack with one card missing that someone else took out for their deck. You take a card from that pack and repeat that process until you’ve picked a whole pack’s worth of cards. Then you’ll do the same thing with a pack from the Eternal Draft pack, a curated list of older cards. After that you’ll pick from one more Eternal Draft Pack and finally another Empire of Glass pack. You’ll end up with a 4-pack pool to build a 45-card minimum deck. But which cards should you pick? Keep reading and we’ll give an overview of the Empire of Glass draft format!

Tribal synergies are a big part of the format – Mandrakes, Valkyries, Soldiers, Grenadin, and Sentinels. Drafting lots of units of the same type helps us get lots of units that will work well together. But there’s more to each of these tribes than their units, what kinds of spells and attachments do we want to draft to back them up? Let’s take a deeper look at what each is about. 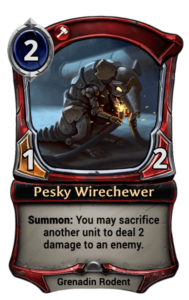 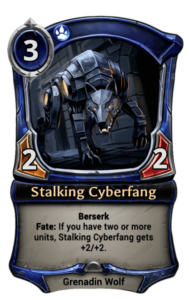 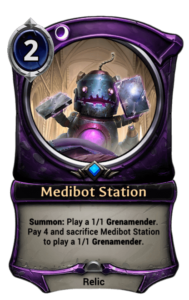 With Grenadin, appearing primarily in Fire, Primal, and Shadow, we get lots of aggressive, disposable bodies to work with. Berserk Grenadin like Cyber Hound or Junk Obstructor can generate extra value when they attack twice. With a Beacon of War, they’ll pump on each attack and with Grubbot, we get extra treasure troves to keep our hand loaded up.

Another way to use our pesky Grenadin is to power up our spell powers. Sparking Vermin plays a 1-damage Snipe when it dies, making it the perfect card to sacrifice to Pesky Wirechewer. And with each Plated Hookclaw we have, that Snipe will deal an extra damage. Some of the biggest blowouts that Grenadin can pull off come from Cyber Combustion, wiping out entire enemy armies while our cybernetic friends remain immune from the damage. 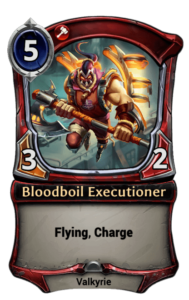 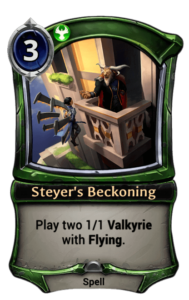 The Valkyrie in Fire, Justice and Shadow are about fearsome weapons, and flying over the opponent to close out the game. They lean hard on aggressive flying units like Bloodboil Executioner to make sure that the opponent can’t stop their flying onslaught, and utilize cards like Sludge Blade to keep enemy units in check and make sure that they don’t lose the damage race. The Sludge Blade of course heavily rewards you for pulling off its Valkyrie Warp which requires you to have at least one Valkyrie in play, and what better way to ensure that than with a card like Steyer’s Beckoning, giving you not one but two Valkyries.

Of course, sometimes Relic Weapons alone won’t be enough to keep you alive while you attack in the air, so you’ll want to prioritize picking up some good blockers such as Razorbot to help fill out your non-Valkyrie slots in your Valkyrie decks. And of course the flying Valkyrie are excellent at wielding weapons such as the ones created by Málaga Munitions to help them end the game even faster. 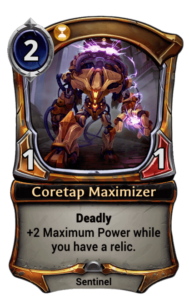 The Sentinels appearing in Fire, Time and Justice are merciless machines fueled by ancient relics. A Sentinel deck with Barricade Bashers and Redplate Crashers will look to beat down hard and fast.

But Sentinels can play longer games too. With Coretap Maximizer, we get a huge boost of power if we have a relic allowing us to get to a bigger Sentinel. Sidestreet Monitor is a super versatile Sentinel, flying over for damage, protecting itself with Regen, and allowing our Sentinels to attack and block, readying them all whenever we play a relic. A key to drafting Sentinels means getting enough relics to unlock these synergies. Some good common relics to look out for include  Amber Lock and Okessa’s Audience.

A Laser Blast is a great removal option to prioritize for a Sentinel deck. We can play it for just one when combined with a Sentinel and it combines great with a big Sentinel like Barricade Basher or the deadly Coretap Maximizer. 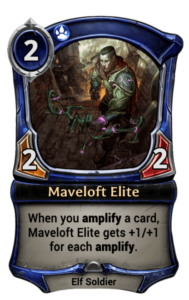 The soldiers in Time, Justice and Primal are fierce fighters but have some tricks up their sleeve as they maximize amplify and stun. For example, Maveloft Elite is a 2-drop that is more than capable of running away with the game if you manage to do enough amplifying. The soldiers also employ versatile cards like Covenant Peacekeeper to either help slow down the enemy forces, or keep yourself on the front foot to press the attack. Stormhalt Battalion is the perfect follow-up to a Covenant Peacekeeper, finishing the job and getting another soldier to fight with.

Because of how strong amplify cards are in the Soldier decks, they love to have lots of power available to them. Cards like Send for the Reserves are a really powerful tool to have at your disposal that only gets better the longer the game goes. And with Maveloft Quartermaster, we can keep refueling our hand, making it impossible to run out of things to do. 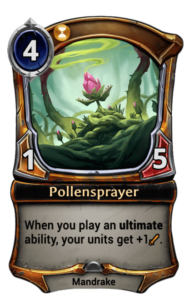 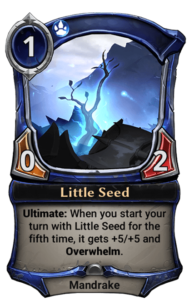 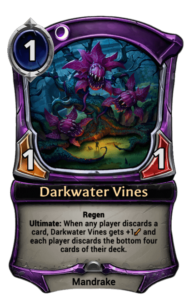 Last but certainly not least we have the Mandrakes sprouting up in Time, Primal, and Shadow. The Mandrakes are all about ultimates and powering themselves up via cards in the void. If you love grinding people out by slowly powering up your units over time, Mandrakes are the tribe for you. They’re also the most represented tribe for the Regen ability, giving them good longevity against attacking enemy units.

One of the apparent weaknesses of the Mandrakes would seem to be their lack of flying units, but they can get around that with cards like the Draft Pack card Spore-Spitter. If you manage to get enough cards in the enemy void, either through effects like Darkwater Vines ultimate, or just by natural circumstances of playing a longer game, Spore-Spitter is more than capable of finishing off the enemy player on a clogged-up board. Of course, to get to those longer games, you’ll want to make sure that you prioritize ways to deal with enemy fliers in your Mandrake deck, with cards like Ghastly Perfume and Fatal Misstep playing an important role. 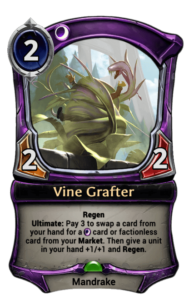 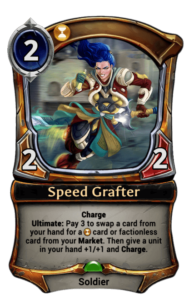 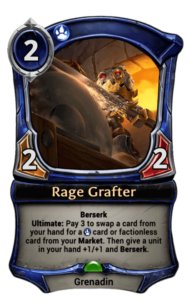 Another key facet of Empire of Glass draft is building a strong market. This is a great place to value getting unique but niche options available to you such as Blackout the Skies to help kill multiple enemy flying units, or Frostwave to help lock out a couple of units and win the race.

Phew! So there you have it, an overview of the Empire of Glass draft format. Now get out there and practice up so you can earn your spot at the 2021 Eternal World Championship. Empire of Glass 5k Draft Open begins on Friday April 30th at 10 AM MDT [16:00 UTC], with the queue open until Saturday May 1st at 4 PM MDT [22:00 UTC]. Be sure to catch all the top 64 action on Sunday May 2nd at twitch.tv/direwolfdigital!