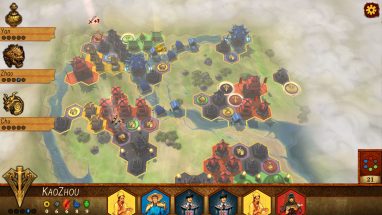 Reiner Knizia’s Yellow & Yangtze is now available on Steam, iTunes, and Google Play! Get a head start on founding your own dynasty with these strategy tips and tricks that will elevate your empire to greatness!

In Yellow & Yangtze, you match tiles and leaders of the same color, start Revolts, and wage War. But with only two actions per turn, you must make sure that each action is moving you toward your ultimate goal of victory. The following are some tips and tricks to help you get the most out of each and every action.

Diversification is king in Yellow & Yangtze. Since your final score is only as good as your weakest scoring category, you will need to know when to stop playing tiles in your strongest type and focus on your weaker ones. Past a certain point, playing tiles to your strongest categories is throwing away actions. Correctly identifying that moment will help you master scoring.

For example, once you have built a Pagoda of a particular color, it is often better to move on to another category than to go for a second Pagoda of the same type. Not only are you investing too much into one category, you are increasing the risk of all your progress being wiped out by a single Revolt.

When it comes to deciding when to focus your efforts on a particular category, there are a few things you should consider. The more Artisan points you have scored, the more room you have to widen the gap between your lowest and highest scores. Also note that four player games are lower scoring overall than two- and three-player games since each player will get fewer total actions before the game ends.

A good first move is to evaluate your opening hand and place a leader that matches one of your most common tile types. Next, you want to start playing those matching tiles to the leader’s State to create a Pagoda. When playing tiles, you should usually be working towards building a Pagoda.

Advanced Tip – When building a Pagoda, try to place it in a position where your leader separates that Pagoda from the other tiles in that state. This will discourage enemies from starting Revolts against you since removing your leader will disconnect the attacking leader from the Pagoda.

In this example, you are the Bull and your enemy (the Pot) just played a leader to challenge you in a Revolt. If they win, your leader will be removed and they will not be connected to the Trader Pagoda.

Be careful not to start Revolts you are unlikely to win. Doing so will score a point for your opponent, waste an action, and make it harder to win your next Revolt (since you lose all the Governor tiles you commit). 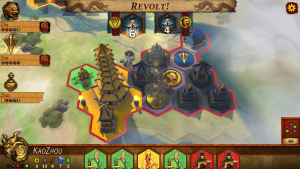 If your enemy has just been involved in another Revolt, you may be able to get away with a smaller lead in Governor tiles. They likely will have expended most of the Governors in their hand and be more vulnerable to an attack.

Don’t despair if you lose a Revolt. You may even be able to win on a second try if you Revolt again with your second action. There are a few things to check for to see if this is a good move. The first is that you have a Governor leader in your hand and your opponent doesn’t. The second is that the number of Governors adjacent to the spot you are going to place your leader is higher than that of the enemy leader.

Since Wars happen less often than Revolts, it is easy to underestimate their importance to the game. A well-planned War can drastically swing the game in your favor. If you have leaders in a State with many Soldier tiles, keep an eye out for opportunities to start a War against a weaker State with leaders that match yours.

Remember that Wars occur between States not players, which means there are times when you will have leaders on both sides of a War. To help decide which of your leaders to support, you should see whether any of them are scoring Pagoda, as well as how important their scoring category is to you. 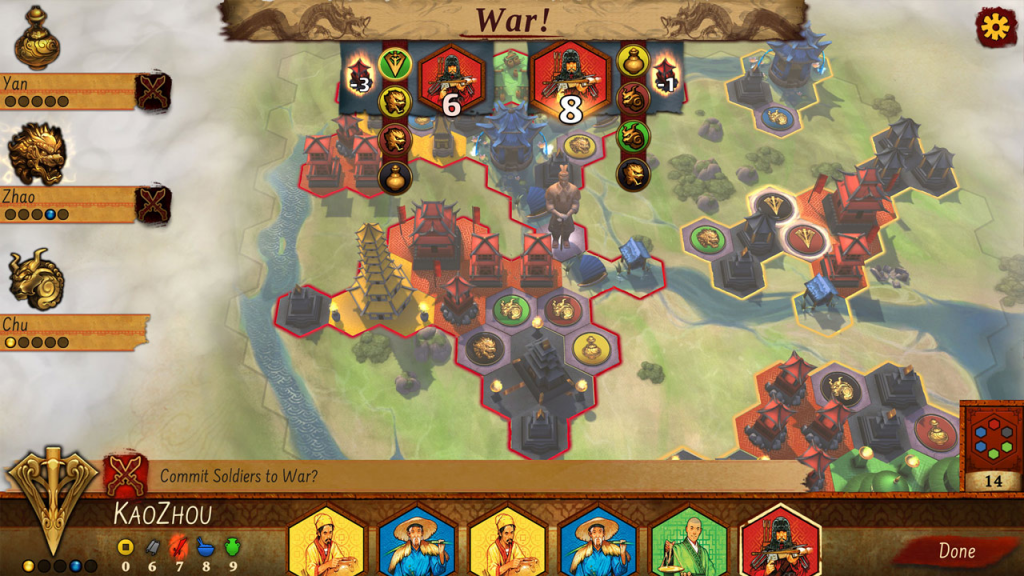 A Soldier Pagoda is especially vulnerable during War. Contributing Soldier tiles to the side of a Soldier Pagoda you are scoring will reduce the change it is destroyed during casualty resolution.

Advanced Tip – There may be times when you will want to commit to a War that you have no direct interest in just to get rid of Soldier tiles in your hand that you don’t need.

Advanced Tip – Another way to protect your leaders from enemy Revolts is to cover up spaces that would be good spots for enemy leaders to challenge you. In the most extreme case, you may be able to block all of the spaces adjacent to Governors in your leaders State. This makes it so an enemy can’t start a Revolt without playing a Governor tile to the State first.

Make sure to place your Farmer Leaders adjacent to Governor tiles near river spaces. Not all States will be suitable for placing Farmer tiles, since there are only four river areas on the map that can support a Farmer Pagoda. 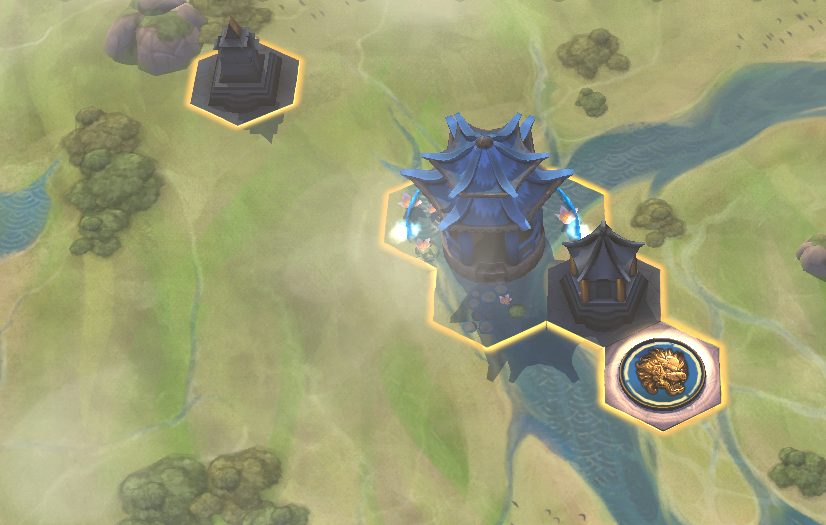 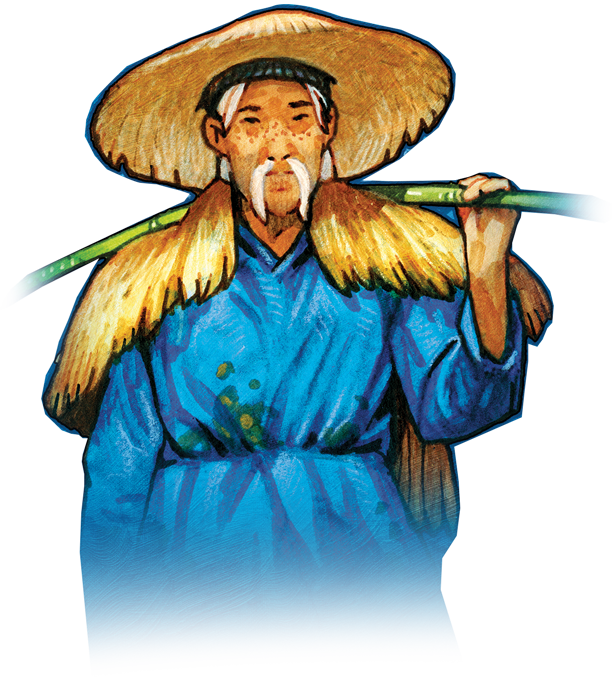 If you have three Farmer tiles in your opening hand, you have access to what is arguably the best opening move in the game. Place your Farmer leader next to the spot pictured above, followed by your three Farmer tiles. This is the only way to build a Pagoda on your first turn.

Since multiple Farmer tiles can be played as one action, you should wait to play Farmer tiles until you have at least two in your hand. 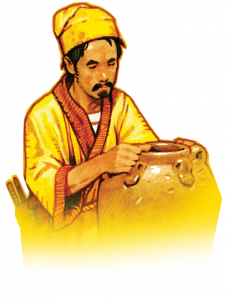 Artisan points aren’t technically necessary to win the game but they are incredibly powerful due to their flexibility. Aggressively Revolt against enemy leaders with an Artisan Pagoda. If you are lucky enough to take hold of the single Artisan Pagoda you need to be ready to protect its leader with Governor tiles. Many games can be decided by one player running away with control of this Pagoda. 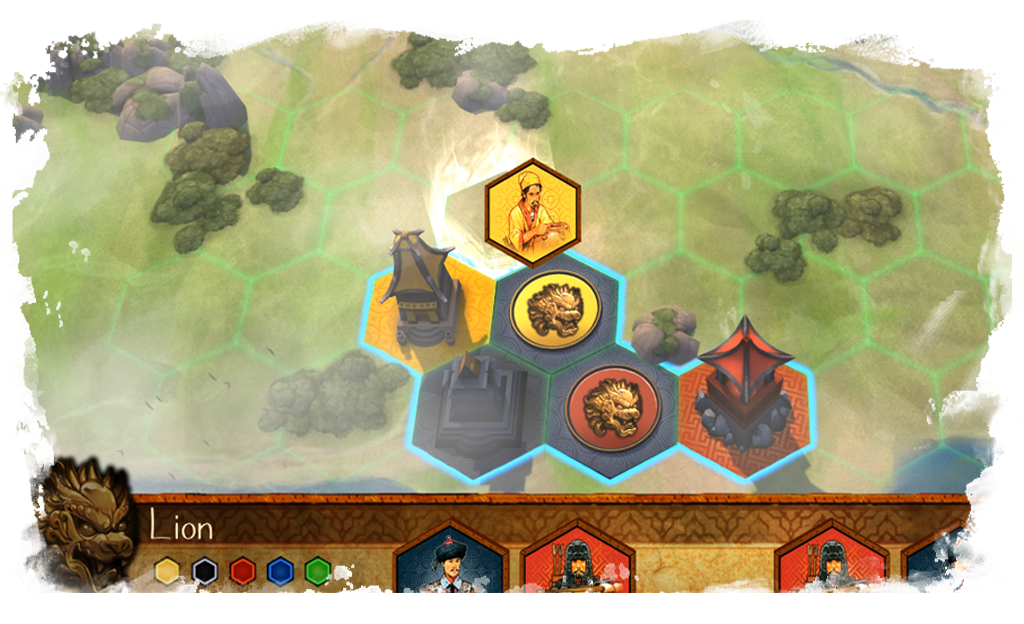 Advanced Tip – Since Artisan tiles are the rarest tile type you may find situations where using the Trader power to rebuild a stolen pagoda is your best option to keep scoring Artisan points.

Look for opportunities to send enemy leaders back to their owner’s hand by removing the last Governor tile adjacent to them. If you conduct a Peasants’ Riot with your first action you may be able to take a newly unclaimed Pagoda with your second.

Peasant’s Riots are especially powerful in two-player games, since the player you target is always your most threatening enemy. Removing a single enemy leader in a 3+ person game sets both you and the targeted player back an action, often benefiting the other players.

Don’t set yourself up to be a victim. Placing multiple leaders next to a single Governor tile will leave you open to getting blown off the map by an enemy Peasants’ Riot.

Advanced Tip – A well placed Peasants’ Riot can be used to split up an enemy leader from the Pagoda it is scoring. This can open up an opportunity for you to play a leader to take that Pagoda without the need to Revolt.

Be cautious about using the Redraw ability especially in the early game. Since you start the game with an even score in each category you should be making the most of what you have – there’s always a way to score points! If you need a specific tile, remember that the Trader tile can be used to help you find what you need in the Market instead of using Redraw.

The Redraw can be used later in the game to help find Soldiers or Governors when you have a particularly important Revolt or War you need to win. You can also gain back some of the tempo lost in a Redraw when finding Farmer tiles, since you can play any number of them as one action.

Another tactic for disrupting your enemies is to play tiles in spaces that will block them from creating a Pagoda in the first place. This is typically only worth it if you are scoring a point for yourself at the same time.

Whether you are a new or experienced player, we hope you learned a few new tricks today. We’d love to hear your thoughts about this article, as well as some of your own strategy tips. Drop by the Dire Wolf Digital Discord and check out the digital board games channel, or tag us in a tweet!

New empires rise! How will you be remembered? Write your own legend in Yellow & Yangtze. Available now on Steam, iOS, and Android!