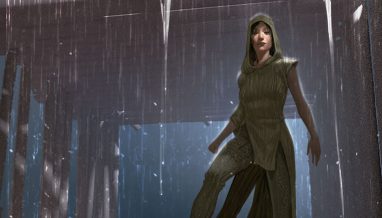 “A process cannot be understood by stopping it. Understanding must move with the flow of the process, must join it and flow with it.”

Dune was an exciting and interesting property to develop a game for, in that it’s simultaneously well-known and deeply mysterious. Frank Herbert’s original novel has been around for more than 50 years, and has only grown richer as more books followed in the series. Yet what Legendary Entertainment and director Denis Villeneuve are creating with their adaptation is still shrouded in a secrecy that fans around the world are eager to pierce.

You can count us – the Dire Wolf team making Dune: Imperium – among those fans. Working on the game was a thrilling opportunity to get a sneak peek at some of the early creative from the movie to come, and Legendary gave us tremendous support and guidance on Denis Villeneuve’s vision for the film. We of course have yet to see the film itself, but the references we were shown gave us the inspiration vital to achieving one of our main objectives – making an authentic Dune game that visually and thematically felt like a part of this new cinematic universe.

Even still, there were times when we wondered how we were going to pull it off. Filmmaking is an incredibly fluid process now with the always-expanding capabilities of digital effects only created long after the cameras stopped rolling. Since we always intended for Dune: Imperium the game to hit shelves this holiday season, in order to release that game on time, we needed to finish the game while the film itself was still being handcrafted by Denis Villeneuve and his team. This occasionally meant that Legendary had not yet defined something that we really wanted to feature in the game. We are aspiring to capture the full scope of the Imperium, after all. And while the upcoming film is going to be EPIC (Did you see that trailer!? You did, right?), no single movie could reasonably cover all of the existing Dune content, with  nearly 20 books in the series. So far.

Given this challenge, our constraints could easily have been “if we don’t show it, you can’t show it.” (Which is actually how it works for many licensed games.) Instead, we received enormous support from Legendary and everyone associated with the films and franchise, empowering us to design a game that is not just inspired by the upcoming movie, but also takes inspiration from elements in the literary series as well. To capture conflict throughout the Imperium, we needed to tap into the rich material found only in the books, and armed with them and the film both as our guides, we were allowed to make the best version of our game and find creative solutions in numerous ways. Finding our own answers to big questions, and getting to explore a few unexplored corners of that universe.

Since we were plucking elements from both the film and the book series, we ran into an interesting conundrum as we started to explore how we visually represented the various canonical elements featured in Dune: Imperium. Our initial painted treatments were fairly photorealistic, and a question arose about the potential confusion around our artistic vision for the game and Denis Villeneuve’s vision for the film. If our game perfectly mirrored the film in parts, some people might suspect that everything in Dune: Imperium – even things not yet seen on screen – was directly inspired by the film. So we went back to the drawing board, and (with our roots in developing CCGs where many artists contribute to the game) came up with a range of visual styles that accommodated the range of styles among our art team.  A style that could acknowledge and be inspired by the designs and visuals that we had access to, but also maintain the creative freedom and flexibility to go beyond the film and capture the larger Dune universe in our own way.

As we explored that vast universe, the biggest challenge was crafting game mechanics around key thematic events and influences that Dune fans would want to see. A variety of cards that made it feel like the game events were unfolding across the entire Imperium. For instance, we were keen to explore the influence of the Bene Gesserit in the game. For thousands of years, the Bene Gesserit have spread legends, superstitions,  even prophecies into the cultures across various worlds, so that they might one day gain influence over populations when they were ready.

This method is called the Missionaria Protectiva, and we represented this concept on a card where we see a Bene Gesserit Sister weaving stories and planting some myths to an enraptured crowd. The mechanics of the card are also loosely inspired by the legends they spread: if the Bene Gesserit work together, they can gain influence within a faction. 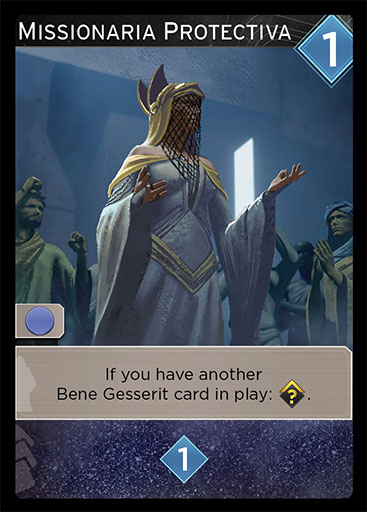 Other examples of faction and gameplay themes for cards that were fun to explore include: 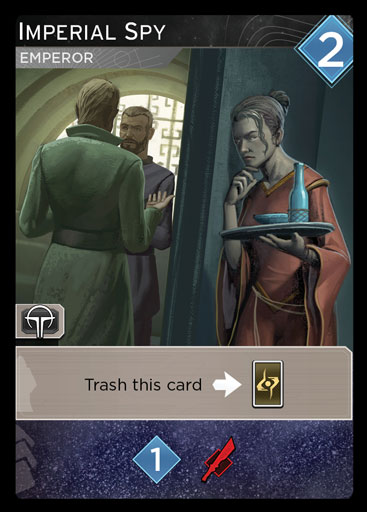 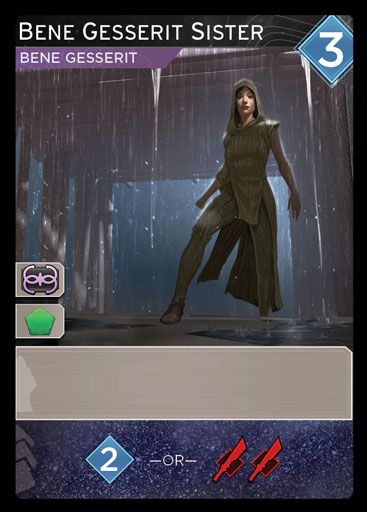 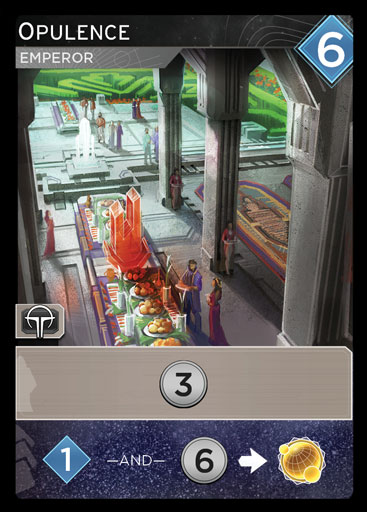 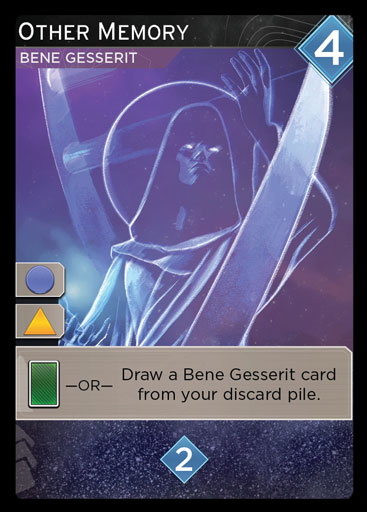 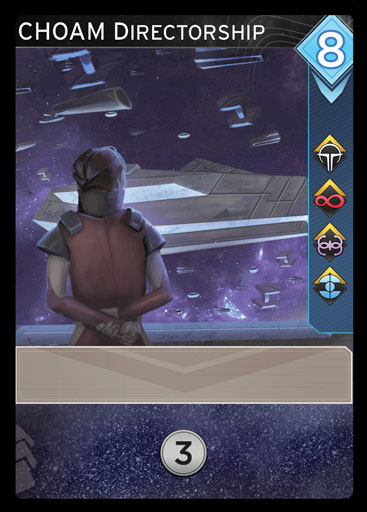 Finally, our last major challenge was identifying who our players should portray in the game. Our approach to the game saw the need for four powerful noble houses, which could theoretically bring enough military and political influence to bear to vie for control of the spice trade. The Atreides and Harkonnen were no-brainers, as they get the majority of the spotlight in the first book. Fortunately, there are many other houses throughout the book series, so we had quite a few options to consider. For the third and fourth houses of Dune: Imperium, we ultimately chose House Richese and House Thorvald. Fallen industrial titans, House Richese was once so great that they were awarded stewardship over Arrakis. After a bitter trade war left them disgraced, the Richese lost Arrrakis to House Harkonnen and they’ve been manipulating their way back to the top of industry and the Imperium ever since.

The Thorvalds are a cunning noble house fleshed out by Brian Herbert and Kevin J. Anderson in Paul of Dune. Earl Memnon Thorvald proved himself as a shrewd politician who could leverage his great wealth and resources to seize power. Featuring him was a clear choice for one of the leaders, along with Countess Ariana Thorvald, a new character who is explicitly addicted to spice (as many nobles were) and adept at commanding the Thorvald forces to serve her own agenda. 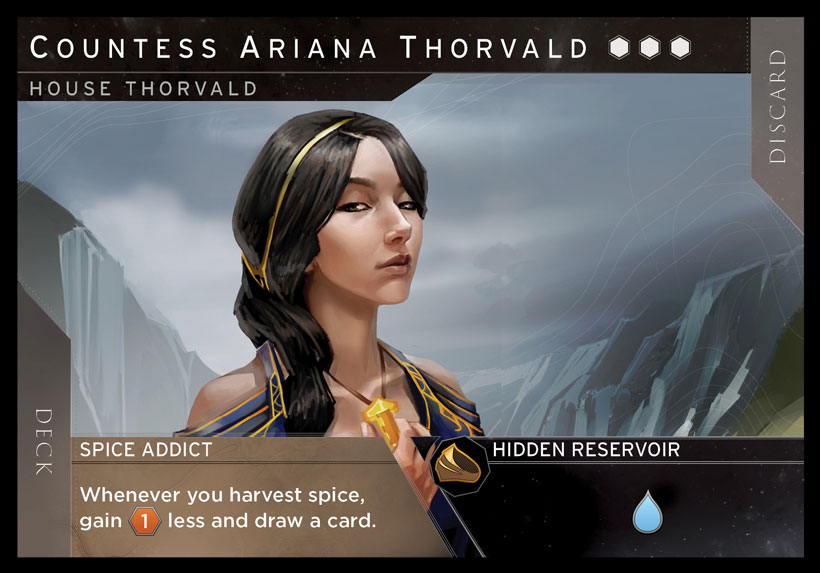 As you can see, it’s been a long and fascinating collaboration, and we hope that you’ll agree that the end result is a quite satisfying (pardon the pun) mélange. Dune: Imperium features material inspired by the upcoming film, still more material taken straight from the novels, and a dash of new material approved straight from the source. We loved the chance to truly partner up to create a unique new board game in such a beloved universe.

If you’d like to ask questions and join in the conversation about Dune: Imperium, head over to the Dire Wolf Gaming Discord and to the Board Game Geek forums.