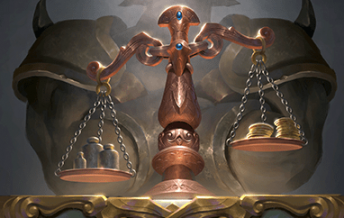 With new cards and events filling up the calendar, there’s a lot being shaken up. We marked the arrival of Eternal’s newest campaign, Hour of Glass this past weekend with an Expedition Open and Karnage became the latest player to earn a seat at the 2021 World Championships taking it down with their FJP Tandem Aggro list. (See their list and more lists here) Your next chance to qualify will come at next weekend’s Draft Open, August 13th-15th.

As we continue to monitor and assess the impact of the new campaign and the metagame’s response, we have a few changes to announce today as well as some additions to the options players will have in the Draft and Expedition format.

A common piece of infinite combos, Stained Honor’s latest trick pairs it with Repel Darkness from Hour of Glass and Belligerent Yeti to produce an infinite number of twists and thus infinite damage. With each piece costing just two, it is a recipe for players to stack up each piece in hand and eventually play them all at once to end the game out of nowhere. By increasing the cost of Stained Honor, players can still try to pull off their wild combo, but if they do, they’ll realistically need to take a chance, play these cards over multiple turns and let the enemy player take a shot at fighting back.

Some new cards will be popping up in Draft Packs starting today as well as joining the Expedition format. For the full contents of Expedition and the Draft format, click here. As for what’s joining…

We look forward to seeing how the formats evolve and adapt in the coming weeks and will continue to monitor their balance and health.