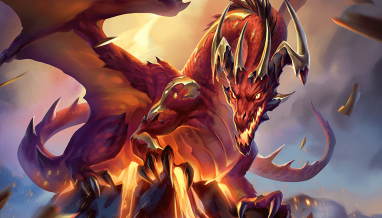 It’s (finally, almost) here!  Starting next week, the Eternal Community Store will be available in-game (PC and Mac builds only)!

Obviously, our ‘Initial Test’ of Interactive Twitch Drops took (ahem) a little longer than we anticipated, but along the way we collected a lot of data, looking at various types of streamer and viewer activity and accumulation rates, and ultimately tweaked some of our initial assumptions.

So it starts with our content creators.  Our primary goal with this project was to create an ecosystem that supports our streaming community in meaningful ways, but also in ways that don’t undermine Eternal’s base economy, and that aren’t able to be easily abused.  We’ve heard a lot of stories about how folks ‘came for the drops, but stayed for the show,’ and we want to continue to promote that dynamic, connecting viewers with streamers, and also walking the tight rope of balancing engagement and rewards.

So first of all, thanks for your patience!  As we’ve said previously, the whole thing is pretty experimental, and we’re sure there will be hiccups and tweaks and adjustments as we go (and just as a disclaimer, everything about this system is subject to change).

And after such a long delay, we also understand that expectations are not likely to be lined up with what we deliver, so please continue giving feedback, and please keep it constructive. The Community Store is meant to be a fun value-add that evolves as for engaging with Eternal outside of the game, and it’s important that we continue to hear from you as it evolves along the way.

In the Community Store, you’ll be able to spend the Influence you earn from watching your favorite streamers on Twitch to buy Packs of cards and cosmetic items like avatars, totems, card backs, and new emote packages.

For streamers, the Community Store lets you turn the Influence you’ve earned on stream into channel-exclusive Twitch Drops campaigns to help your audience grow! And for our most dedicated streamers, we’re offering some longer term stretch goal experiences, such as working with the DWD team to design a card or a card back!

Interactive Twitch Drops have been pumping out Influence for a while through bugs, rate changes, and design changes.  So when you log in after the Community Store goes live, you will find an Influence balance in-game that reflects the current design mapped to your activity since the program kicked off.  In short, rather than inflating all Community Store Influence prices to account for the delay, we’ve reduced the balances so that we can work with more reasonable reward costs and round numbers.

Instead of a max of 8 hours of day of Influence value for streaming and viewing, we’ve dialed the caps back to 4 hours per day so as not to incentivize extreme behavior.  We’ve also reduced the number of Interactive Drops chests that appear for viewers from approximately 6 per hour to 3 per hour.

As we stated up front, Droptober wasn’t ultimately intended to become Dropsgiving, Dropsmas, and Happy Drops Year, all rolled into one – we had been planning to eliminate always-on passive drops all together, and only use them for special events, like ECQs.  However, we’re going to continue for the time being with a low-value pool of primarily commons and uncommons (with very rare chances for higher value items) as a background for the whole program.

One of the difficulties of a system like this is making it abuse-proof, both on the streaming side and on the viewing side. (We’ve seen and hopefully taken care of a number of 24/7 and other types of fraudulent streamers, so far.) The goal of Interactive Drops (instead of the usual Passive Drop system) is to create a system where people aren’t just AFKing on both sides of the ball. If we detect bots or see unrealistic interaction rates, we’ll take action, by wiping partial or complete Influence balances, disabling access to the Influence Store, or even suspending or banning Eternal accounts if necessary.

Here’s what you’ll be able to earn:

To help Twitch streamers continue to grow their audiences, players will be able to purchase special Drops Campaigns that are only active on their channel!

The Community Store will feature a rotating variety of cosmetic and game content available for one-time purchase. At launch, this includes:

Finally, the Influence Store is your opportunity to work with the DWD team and make your lasting mark on Eternal! As a couple of initial longer-term goals primarily aimed at Streamers, there are two pretty cool opportunities available:

(Note: This is a collaboration, and we’ll work together; you’re not going to run wild and make some obviously OP nonsense that we would never ship.)

Stay tuned next week for the final details on pricing. There’s more to come in the Eternal Community Store, and we’ll be introducing new products (and retiring old ones) over time. So if you’ve been thinking about trying your hand at streaming, or just want to support your favorite content creators, now’s the perfect time to join the Eternal community on Twitch!

And as always, let us know what you think, and especially let us know if you’ve got some ideas for cool things to put in the Community Store yourselves.