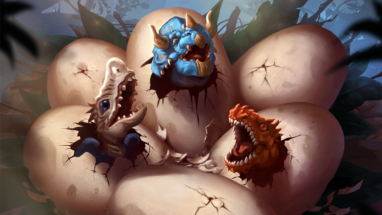 Hello, I’m Patrick Sullivan, one of the designers on Eternal, and what follows is our first live balance change since the release of Unleashed, our most recent expansion. In the early days of Unleashed, we’ve seen a ton of innovation, evolution and adaptation in all three of our major formats, Throne, Expedition and Draft. We also know players are just starting to scratch the surface of all the new cards and mechanics, and that new discoveries could be on the horizon.  We’ll be closely monitoring all of those formats, the upcoming Throne Open, as well as player feedback over the coming weeks to determine what (if any) changes to make in our next balance update on May 31st. Until then, we do have one change to announce that will be going into effect today.

Dinosaur Nest – At the start of your turn, play a 1/1 Dinosaur with either Flying, Charge, or Overwhelm at random. (previously was Killer and not Overwhelm)

As Dinosaur Nest appears in the Valley Beyond bundle, players who have purchased since the last change to the card will receive 1,250 gold and owners of the premium bundle will receive 2,500 gold.

This is the second time we’ve taken action on Dinosaur Nest, and while the first change dramatically reduced its power and ubiquity, the card is still a bit stronger than we’d like, in both Expedition and Throne. We believe that Killer as one of the battle skills was the root of a number of power and play pattern issues, and we believe that Overwhelm maintains the spirit of the card while removing a good amount of the frustration and RNG experience of the previous design.