Past expansions of CLANK! have taken you underwater, into a Mummy’s pyramid, deep inside a goldmine and through a spider’s lair, and into a forgotten (but not empty!) jungle temple. Each journey has been exciting and new, but one thing has always been the same: it’s a journey for at most four players. With the next expansion, that changes. CLANK! Adventuring Party allows up to six players to compete in a deck-building adventure!

Adding more players to the mix was not as simple as providing two new starting decks and sets of Clank! cubes. We didn’t want to automatically rule out playing with any of those previous expansions… yet CLANK! and all its existing boards were decidedly built for four. Even with copies of market items, more gold for the bank, and extra Mercenary, Explore, and Secret Tome cards– and you do get all of that in the new expansion – we needed new rules to tailor the experience to more players.

The key issue was the tight competition for tokens on the board, particularly minor secrets and artifacts. For the secrets, the expansion adds 18 tokens (a mix of old and new), and you shuffle all 36 face down in the bank instead of placing two in each minor secret space of the board. Once per turn per minor secret room you enter, you take a token from the bank. You still get something even if you’re not the first or second player to reach a minor secret room.

CLANK! Adventuring Party also comes with five artifact tokens, valued 10, 15, 20, 25, and 30. The new artifacts are stacked in the same rooms as the originals during setup, offering two treasures in each to be claimed during the game. (But not by the same player; a Backpack does not allow you pick up two artifacts from the same room!)

These changes, together with an extended Rage Track that tops out at six cubes, allow you to fit six players onto any of your existing CLANK! game boards. But we still needed more to make the experience as fun as it could be.

One of the great thrills of a deck-building game like CLANK! is having a bonkers turn where all your card combos work and you do tons of stuff. These turns can take longer, and if five opponents can have them instead of only three? Well, that can make for a lot of time where you’re waiting. Your turns are almost always exciting; we wanted to increase the potential for excitement when it’s not your turn.

CLANK! Adventuring Party comes with 35 new cards to shuffle into your Dungeon Deck, and they’ve all been created with the higher player count in mind. It may not be your turn, but that doesn’t mean you’ll be doing nothing. The new cards speak to this in a variety of ways. Some present all the players with a choice to make… 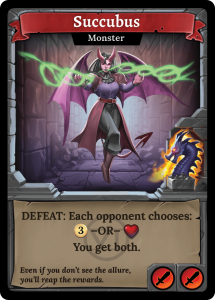 When you defeat the Succubus, you get a phenomenal deal: you grab 3 Gold and heal a damage. But if one of your many opponents gets to it first, not all is lost: everyone else gets to pick one reward or the other. An opponent killing a Succubus might be just what you need to afford a market item, or give you back the health you need to escape in the end!

A new mechanic, Arrive Choice, is quite direct about asking everyone to make a decision: 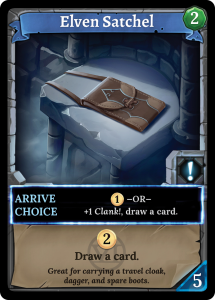 You’re used to cards that do things when they Arrive on the Dungeon Row. This expansion includes cards that present choices in these moments. With the Elven Satchel, do you want to play it safe and take 1 Gold, or trust in the deck you’ve built and make +1 Clank! to draw an extra card for your hand?

Even if you think you know what you want, the group dynamics can change your mind. The “Arrive Choice” on a card goes clockwise around the table. Once, say, two or three opponents choose to put in a Clank!, what do you do? Maybe they’ve just made it safer for you to make a little noise too? It sure would be nice to have a six-card hand next turn, wouldn’t it?

That’s Quite a Reaction

Speaking of six-card hands, another new mechanic in this expansion is your ticket to that… and maybe more. Feast your eyes on React: 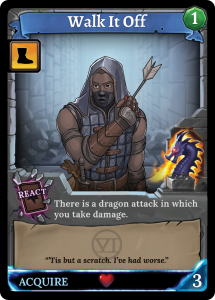 Once you’ve added a React card to your deck, you’re ready for your moment to pounce. While it’s not your turn, if the situation described in the “React” comes up, you immediately put the card in your play area, then draw a new one from your deck. Consider Walk It Off. You’re going to take damage in dragon attacks; it’s inevitable. But if you have this card in your hand when that happens, you can React, play it, and draw another card as a replacement.

What about the Boot? Well, that part you don’t get right away. Whenever you React with a card, it stays face up in your play area, waiting until your next turn comes around. At that time, it joins all the other cards you now play from your hand, and you go on to take your turn as normal. The difference is that Reacting has effectively expanded your hand from five cards to six. 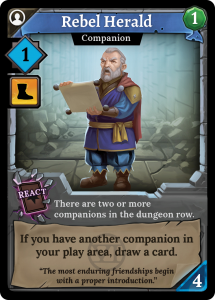 Say an opponent buys the card from the Dungeon Row that you really wanted. Drat! But then, when the row refills, you suddenly find there are two companions there. This is your moment to React with Rebel Herald! You play it, draw a new card for having Reacted, and then smile with satisfaction as you wait for your next turn.

When that turn comes around, you’ve played Rebel Herald already… to which you now add the other five cards in your hand. And if one of those five is another companion? Game text on React cards works normally on your turn, whether you got to React with the card or not. Play that second companion, and Rebel Herald lets you draw another card for the turn (plus his 1 Skill and 1 Boot, of course).

The Party’s Just Getting Started

New rules and new cards come together in CLANK! Adventuring Party to make sure that all the dungeon-delving fun you’ve had with four players still works well with five or six. But there’s even more to this expansion! It also includes six characters, each with its own custom starting deck, to shake things up for any player count.

But that’s a topic for another time… 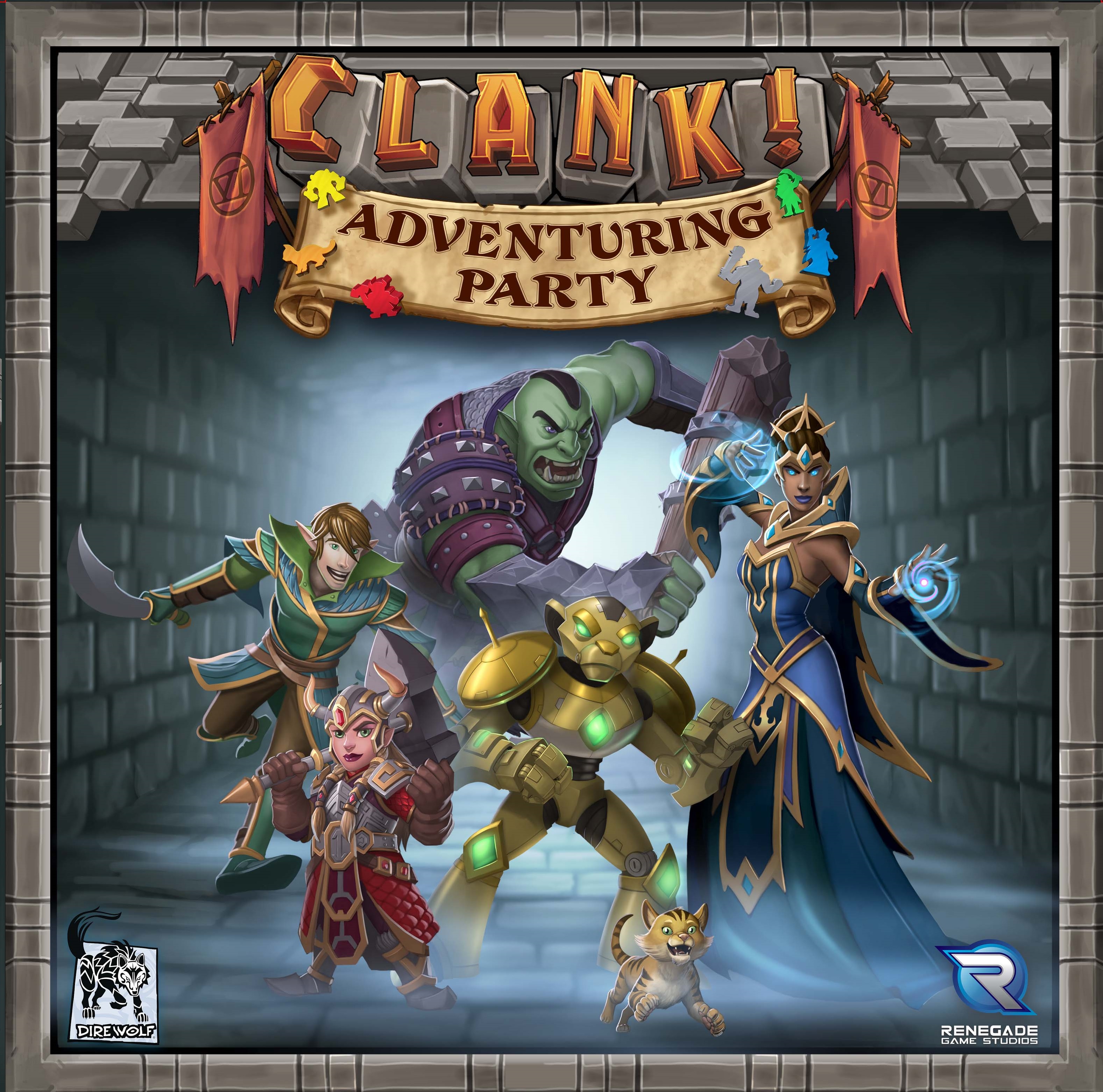