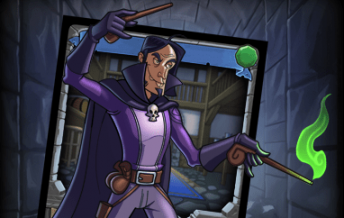 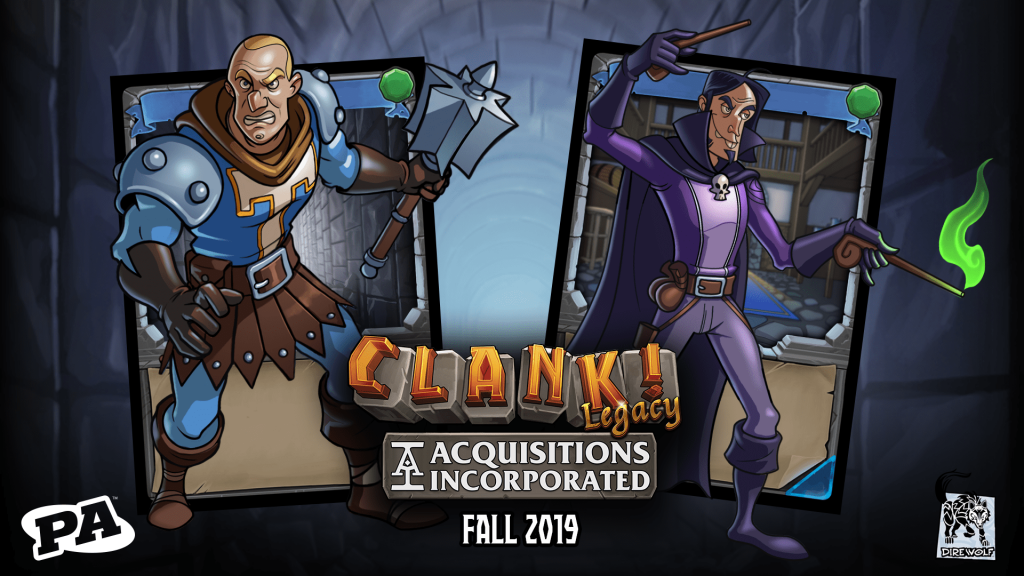 PHILADELPHIA – December 1, 2018 – Dire Wolf Digital, in partnership with Penny Arcade, announced today from PAX Unplugged the next major installment for the award-winning and best-selling board game Clank! A Deck-Building Adventure.

Clank! Legacy: Acquisitions Incorporated extends the deck-building fun of Clank! with exciting new legacy-style gameplay! Found your own franchise of the legendary adventuring company Acquisitions Incorporated, and shepherd your fledgling treasure-hunters to immortal corporate glory over the course of multiple games. Your game board, your deck, and your world change as you play to create a unique campaign tailored to your adventuring party. Be cunning, be bold, and most importantly be ready:

Clank! Legacy: Acquisitions Incorporated will release in the Fall of 2019.

“It’s been difficult to get us to stop playing Clank! at the Penny Arcade office, and we were delighted that this gave us an opportunity to count that as working time,” said Jerry Holkins of Penny Arcade. “Clank! has been rattling around in our imaginations ever since we first played it on release, so it was a real delight to finally get to see some of those ideas realized in the actual game.”

“We’re beyond thrilled to be working with the mad scientists at Penny Arcade to make some Clank!-y noise in the Acquisitions Incorporated universe,” said Scott Martins, President of Dire Wolf Digital. “We’ve been fans of PA for years, and Acq Inc is such a great sensibility fit with Clank! that we jumped at the chance to bring the two together. It’s like getting chocolate in your peanut butter.”

Clank! Legacy: Acquisitions Incorporated will be available from your friendly local game store next Fall, finally allowing players to live, as we do, as immortal forever-kings of this timeless corporate entity.

About Acquisitions Incorporated
At Acquisitions Incorporated, you inquire – and we acquire™. For nearly twenty years, other people have had things you’ve really wanted and we’ve gone over there to get those things, even if they didn’t want us to do that. Typically, they don’t. But we don’t work for them, we work for you™. We’ve acquired it all, but we specialize in staves, gems, and storied weapons of great lineage. We do apply a reasonable surtax for rods, because rods. It’s been a problem. This is Acquisitions Incorporated in a nutshell: Defenses negotiable. Merchandise plentiful. Franchises available.

About Clank!
Co-published by Dire Wolf Digital and Renegade Game Studios, Clank! A Deck-Building Adventure launched one of the most popular new board games lines of recent years.  Followed by expansions Clank! Sunken Treasures, Clank! The Mummy’s Curse, and Clank! Expeditions: Gold & Silk, and the out-of-this-world adventures of Clank! In! Space! and Clank! In! Space!: Apocalypse!.

About Penny Arcade
Since 1998, Penny Arcade (www.penny-arcade.com) has grown from a simple online comic strip into an industry-leading media company. With over 3.5 million monthly readers, the New York Times–bestselling “Penny Arcade” comic is widely considered one of the most authentic and influential voices in gamer culture and the gaming industry. Penny Arcade also created PAX — the largest consumer gaming festivals in the U.S and Australia — as well as Child’s Play Charity, which has raised over $45 million to benefit children’s hospitals.

About Dire Wolf Digital
Dire Wolf Digital is an independent game studio specializing in strategy card games and board games, both digital and physical. Based in Denver, Colorado, the Dire Wolf team includes more than 100 passionate designers, artists and engineers creating and operating games for some of the world’s top brands (such as Pokémon TCG Online), as well as our own original properties (such as Eternal, Clank!: A Deck-Building Adventure, and Clank! In! Space!). For more information, please visit https://www.direwolfdigital.com/