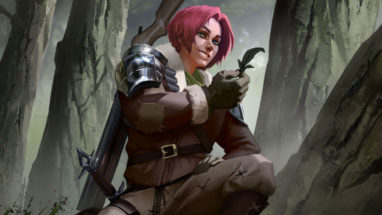 They flipped through the pages of the leather bound book with a careful gaze on the tall grass below. The green foliage leaned and sat slightly bent at an angle. It looked healthy, stalwart.

More pages flipped and a gloved finger moved along a hand-drawn grid filled with dates, temperatures, and a list of coloration of various flora. With a nod they found a row with a short description of the grass before them.

Some sproutlings looked disturbed and slightly brushed to the side. Nearby trees protected the small clearing from any forceful winds. This movement was unnatural. There was no hint of campfire smoke in the air but that meant little; too much time had passed to catch it lingering if the prey were about.

Shadows from the canopy of rustling leaves above forced them to squint at the dirt path that split in two. The grassy hill that crested out from the trees’ cover gave a useful vantage point to the valley below and the mountain that jutted skyward on the horizon beyond. Another glance at the book, another few pages flipped, another grid of data.

Boot prints in the dirt lay obscured and half hidden by yellowing leaves. The indentations had varying depths of impression upon the earth. A difference in weights, some of them travelers on their way to the village below no doubt.

The tracker knelt down and took a long moment to eye the various sets of prints. Two parties, one group moving more slowly than the other. Both along the path initially, one clearly headed to the valley. The others had stood at the fork. Conversed? No signs of a sharp disturbance on the path from the foliage and leaf litter. The conversation had been brief and probably amicable.

No marks in the dirt for whatever weighed down the second group. Something heavy, no doubt, but not dragged. They glanced along the western path, which wrapped around the valley with the trees cut back clear and concise. They frowned. Why stop natural growth? It was not that much of an impediment. Better cover from the sun.

Their gaze moved along the brown of the path, up along the mountain, finally to the snow capped peak with its glinting white mixed with a deep, almost inviting blue. Better cover from assailants there too.

They flipped their book back to its front and tugged at a bit of parchment nestled into a small pocket. The ink on the unfolded missive looked relatively new, with an insignia emblazoned at the top to declare it official Kosul documentation.

They scanned the familiar contents again, just in case. Information about a dangerous quarry which Orene Svetya Stormhalt-Kurtz wanted alive. Observe and track, find the quarry’s den. Just like tracking a bear, albeit one that happened to cast magic with a crazed look in its eye. Plenty of gold promised if found and high praise of previous work for the Oren. Quinn was a name synonymous with finding what sought to be hidden, after all.

Unfortunate business, what had happened not so long ago. Pain and chaos had ruled Kosul for so long. The tyrant had not required a skilled tracker.

Quinn gave a nod and packed away the leather bound book. West, up and toward the mountain. Into that cold, glinting blue and white, to find their quarry. The criminal called Severin hid in that beautiful blue monolith of snow and stone.

Slow and steady, Quinn’s steps landed on stones haphazardly strewn across the snowy ground. Their legs flexed and bent as their weight sat distributed over their hips and moved from one foot to the other. The posture ensured a balanced descent and absolute quiet save for an incredibly soft crunch of snow underfoot.

They knelt behind a cluster of light gray boulders. The melodic trill of a bird rang out while a chilled mountain gust slammed into them. Quinn’s gaze moved up to the dark, foreboding clouds that pushed through the air. The clouds moved ever nearer above them. A snowstorm was imminent, they knew, and Quinn made a mental note to add to the weather pattern data in their leather tome.

Shadows and snow swirled from the clouds and wind. Despite the looming threat of painful frost, Quinn took a moment and smiled, appreciating the view of the slope down to the valley dotted with lush trees and clear sparkling rivers. One of them fit for a dip once the quarry was confirmed, surely. 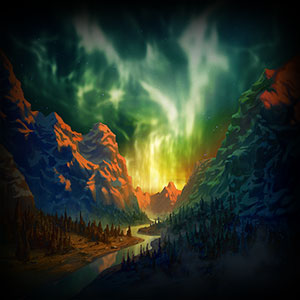 Hours passed. Quinn ignored the tug of hunger in their stomach. Fasting to negate even the scent from some foods had long been a ritual of theirs. They forced calm through their body as they kept their gaze steady on the large mouth of a cave in the distance.

The target had yet to surface from it. Had Quinn misread the prints? Surely not.

Then it came. An anguished scream, sorrowful and pained. The quarry had a captive. Curious.

Quinn tugged parchment from their pack and made a note at its top. Severin located. Presumed six accomplices. Captive present and currently alive. Quinn rolled up their note, placed it into their pack and rose slowly.

With the same cautious, steady movements as before, they began their descent to the village. The Orene would pay well for this information.

During the quest period, your first PvP win of the day will reward you with a copy of Quinn, Master Tracker! Once the promo period is over, you’ll be able to craft the card using Shiftstone as normal. 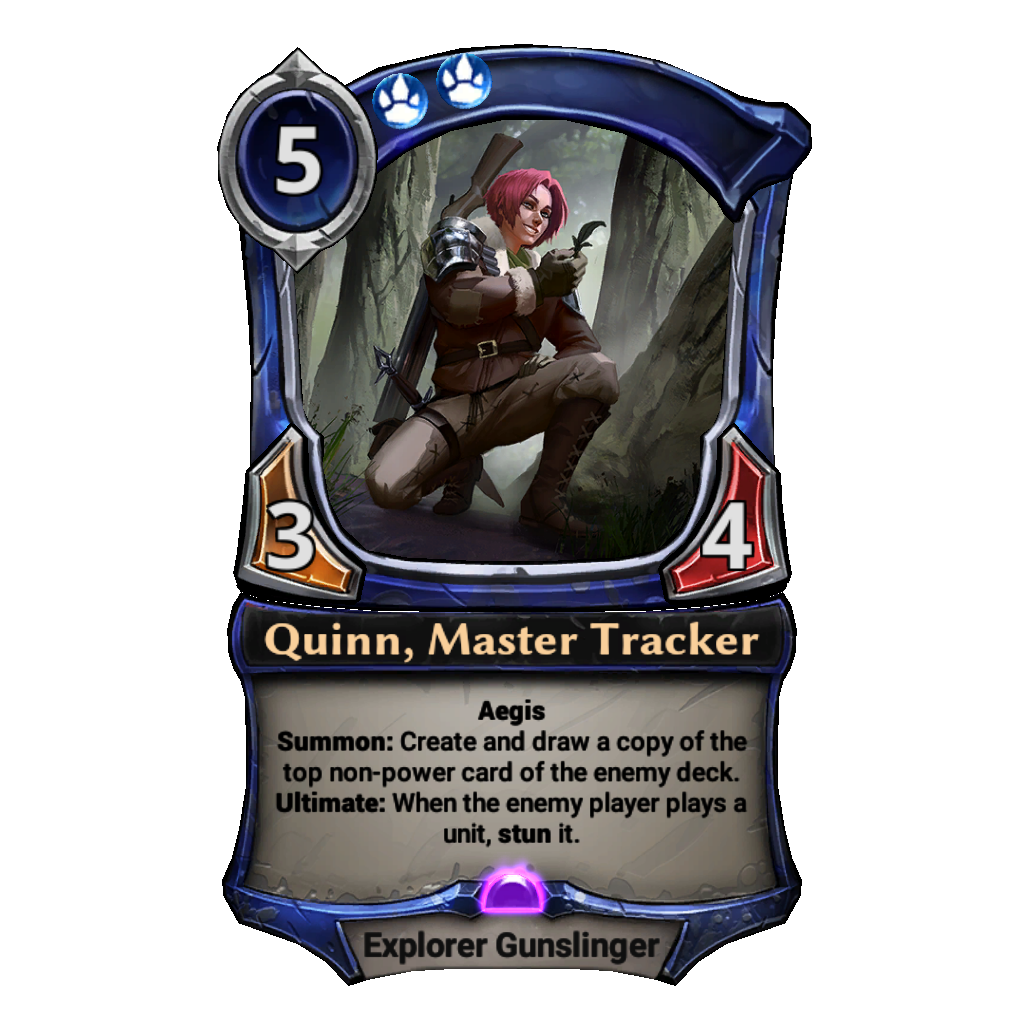 The Quinn, Master Tracker premium Avatar will be available in the store for 300 Gems for a limited time. 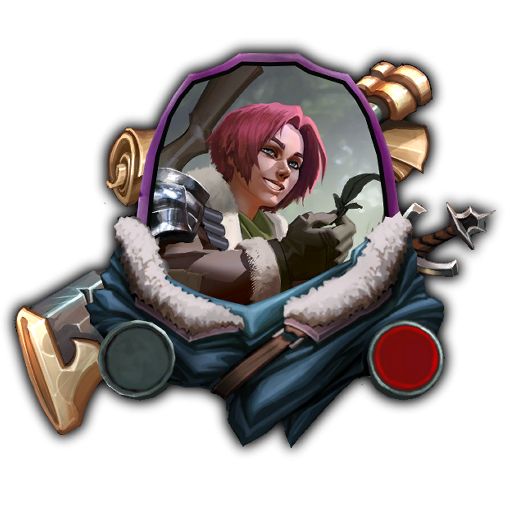 The Quinn’s Search Party theme deck bundle will also be available in the Store for 500 Gems for a limited time, and  includes the avatar and 4 premium copies of the new promo in addition to the theme deck!