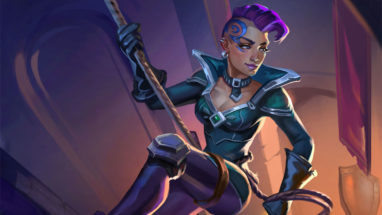 The metal hook sailed through the air and landed with a clang against the windowsill above Raniya. The sturdy jagged tool held against its new perch as she gave it a rough test tug. She pulled confidently at the line. She ascended slowly and cautiously up the stone tower and into the Crownwatch’s store room.

She counted her steps on the way up and noted the horizon in the dark night with nothing but moonlight to guide her. The moon was in the right place.

‘Right on time,’ she thought to herself.

Raniya pulled the hook from the ledge then squinted into the dark room. Moonlight streamed in as her eyes adjusted. Spare weapons, food stores, cleaning supplies. She counted the number of extra weapons then thought back to the Cabal report.

The count matched up. Good, no additional headaches to slip past then.

She moved to the oak door opposite the window, twisted its lock, and pulled it open. Torch light flowed into the store room and she was met with an empty stone hallway save for a few sconces. She ducked out of the room and closed the door behind her and took the path left.

Her steps were swift but calculated as she kept her careful timing.

The hallway led to a set of spiral stairs that were clean but well-worn by years of Crownwatch patrols. Raniya smirked and touched a brick to her left just before the wall curved down for the staircase. A heavy click sounded as something behind the stone gave way.

She pushed effortlessly at the wall with gloved hands. Hidden hinges moved the stone. She slipped into the now exposed smaller hallway then leaned against the door. The heavy click did not sound a second time as she left the entry ever so slightly ajar.

She heard the familiar thud of Crownwatch boots come up the spiral stairs muffled by the stone. Right on time.

The light in the hallway was dim. A single torch illuminated the entryway and looked ready to sputter out. Raniya ran a hand through her shock of purple hair then hugged the wall and knelt down. She moved to the hallway’s edge and stopped just before she entered the connected room. A straight staircase led down to a more open area.

“I’m just… it’s not even a fight. They’re both amazing fighters, don’t get me wrong. But, they’d both just be friends, right?” a low, annoyed voice came up the stairs to Raniya.

“Sure, but say they weren’t friends, if one hit the other at a tavern…” a second voice started.

“Bah, you’re not even listening… once the recharge happens then we can figure this out over a pint,” the first voice said, exasperated.

‘Two guards stationed by the target, good. The report’s still on point.’

Raniya noted the two Valkyrie, in their own kind of stalwart and resolute posture, face one another below.

Beyond the two was a doorway into another room of stone and torchlight. Raniya smiled and slinked back to the torch behind her. She pulled a heavy cloth from a small pack at her belt. She pressed the cloth firmly against the torch to smother it.  In seconds the struggling light was gone.

She shoved the cloth into her pack and pressed herself against the now pitch black wall.

The clunky, alarmed sounds of Crownwatch boots came up the stairs. Raniya made her way past the outlines of the now silent guards with deliberate, quiet steps.

At a quick pace, she entered the doorway the guards had previously stood in front of, then moved into the room. She smiled at the elegant metalwork before her.

Immense, beautifully crafted Valkyrie wings sat on a rectangular table that had a noticeable shimmer in the torch light.

She twirled her hook line in a circular motion and launched it up. The metal bit into the stone of the ceiling above and Raniya pulled herself up the wall. She tugged at the line and wrapped it around herself.

“Damned torches… I told you it was about to go out,” one of the guards grumbled as they returned to their post. Raniya watched one of their helmeted heads peer in and nod at the elegant wings on the table.

A second later the gentle shimmer around the wings dissipated and fell away.

She forced a breath to keep herself calm and lowered herself down as the guards turned toward the staircase.

Finally, she reached her target. She yanked at the hook line wedged in the ceiling and caught it with ease. She turned toward the wings with a large grin. Raniya moved with efficiency and speed to wrap the heavy wings in the rope and slipped the line around her shoulder.

She smirked as she plucked a number of small orbs from a pouch and twirled them in her fingers. She launched them forward. The small orbs landed with a plink on the stone floor and rolled slowly between the guards.

The two of them looked down as a quick hiss escaped the small spheres. In seconds a massive cloud of grey-white smoke swirled through the room.

Raniya launched herself through the doorway as coughing and grunts sounded from the Valkyrie. She shoved past the pair and pushed up the stairs. The clank of the wings against her back came as she resisted the urge to laugh.

She grinned and yanked at the hidden doorway at the end of the hall. She was glad the guards had taken the time to relight the torch. The door pulled easily as she made her way into the empty hallway next to the spiral staircase.

Rough, panicked bootsteps of the two guards came behind the hidden door at a quick clip. Raniya sprinted with the wings in tow down the hallway. She ducked into the store room and closed the door behind her. She nodded as she heard the slight click of the door’s lock move back into place.

She pulled another hook line from her belt then moved to the windowsill. She wedged the hook into the stone and pulled the wings at her back more tightly. She heard heavy, crazed bootsteps move past the oak door and lowered herself down the wall of the tower.

The weight of the wings caused her to sway and waver. She pressed against the wall to catch her bearings as she gripped the line tight.

Her feet touched the ground.

She leaned against the tower. She relaxed and closed her eyes for a full second before she yanked hard at the hook line.

The metal fell to the ground with a hard clang. She picked it up and slotted it to a loop on her belt.

With casual grace, the master thief slipped into the shadows with her prize.

During the quest period, your first PvP win of the day will reward you with a copy of Raniya, Never Caught! Once the promo period is over, you’ll be able to craft the card using Shiftstone as normal. 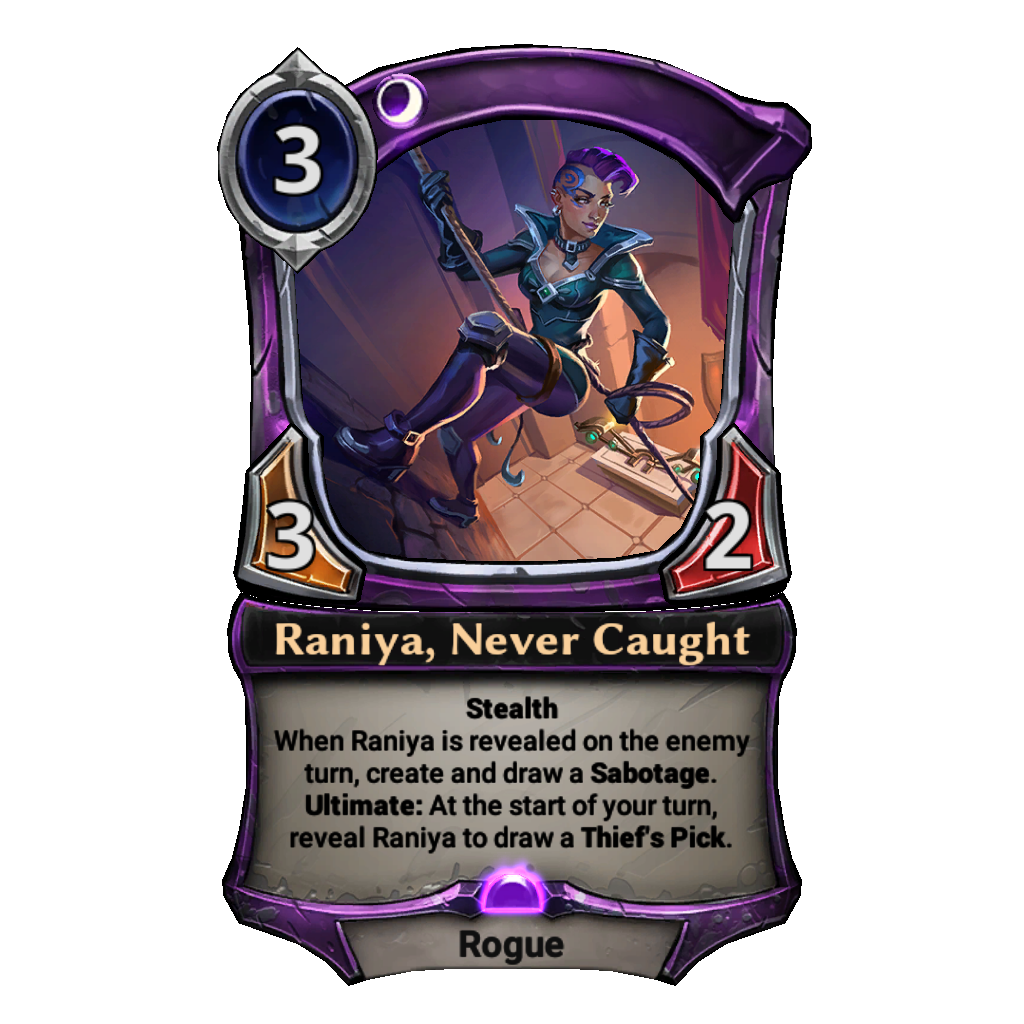 The Raniya, Never Caught premium Avatar will be available in the store for 300 Gems for a limited time. 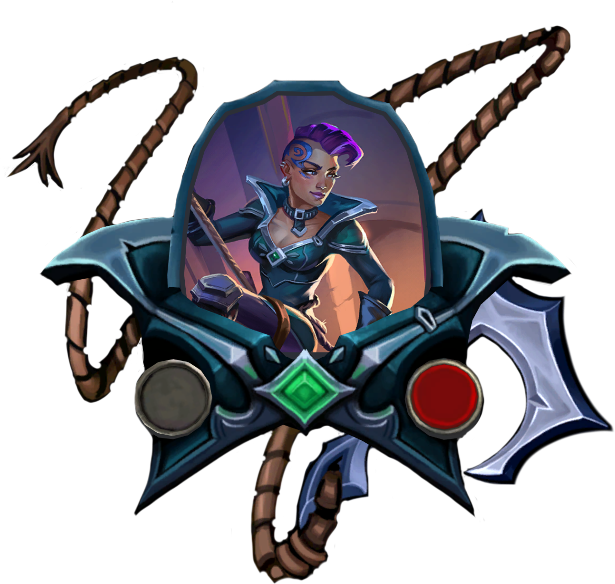 The Raniya’s Raid theme deck bundle will also be available in the Store for 500 Gems for a limited time, and  includes the avatar and 4 premium copies of the new promo in addition to the theme deck!