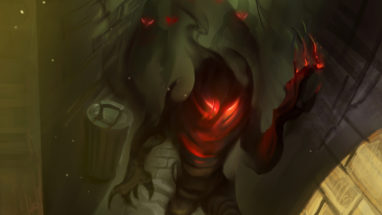 Every game in Eternal, you never know what kind of unit you might run into. Sometimes it’s a tiny Grenadin Drone and his partner. Or maybe it’ll be a fearsome Impending Doom? Or a skillful Crownwatch Paladin? But one thing these units and all the rest in Eternal have in common is once they were played you could always see them coming. Until now.

It’s time to unveil Stealth, the newest skill coming to Eternal in Revelations. When you play a Stealth unit it will be Hidden from your opponent. They’ll see that a unit’s there but it will look like the above. They won’t be able to see what is, including its stats. As the owner of the stealth unit, you’ll of course know it’s true form and be able to see who’s lurking. Here’s one Stealth unit and what it looks like to you. 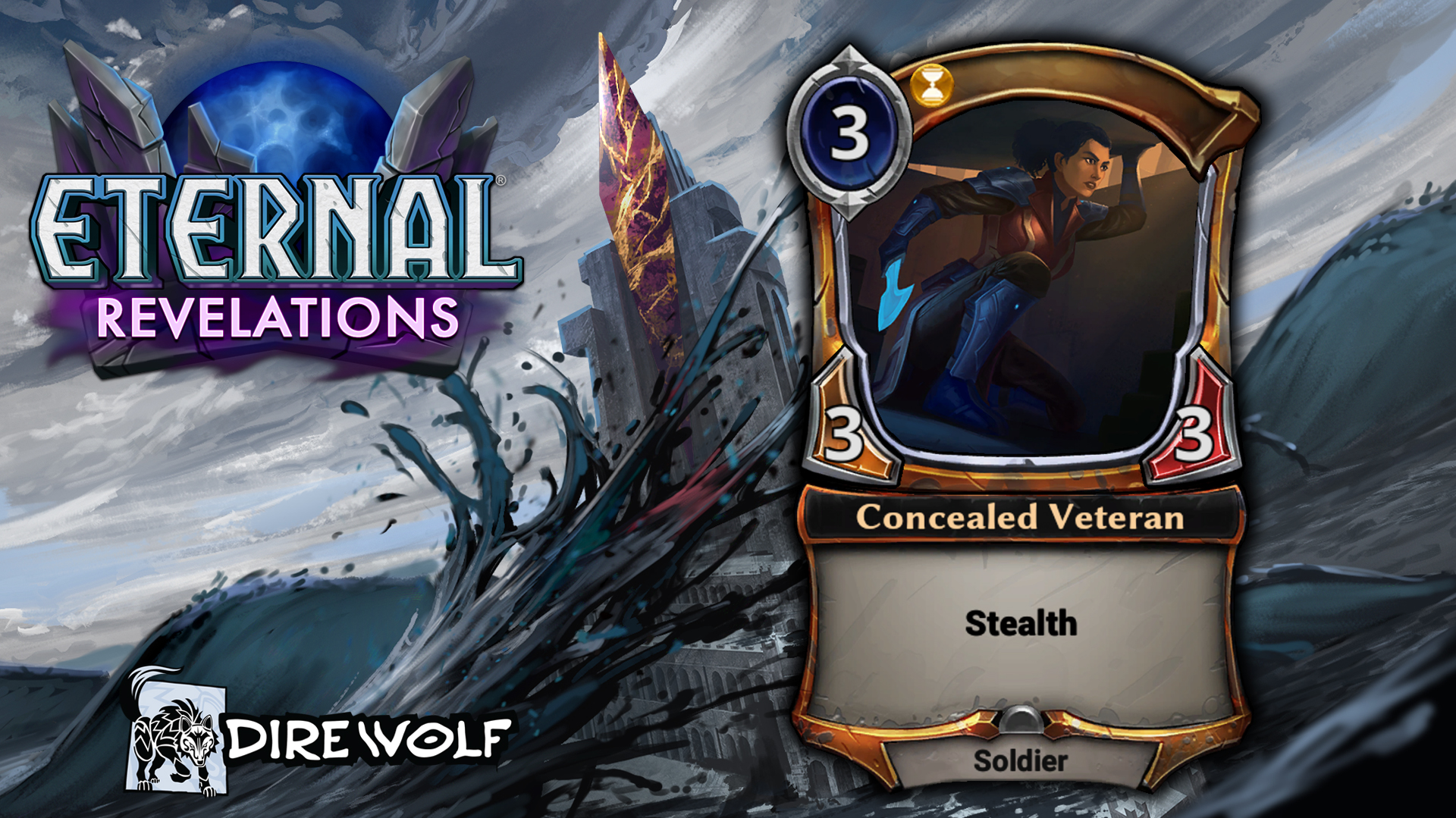 When you play your Concealed Veteran it will be hidden from enemy view. You can still use it like your other units, whether it’s to block the next enemy attack, attack on your next turn, or sacrifice it to a spell like Combust. Now, Concealed Veteran is a pretty normal unit underneath her camouflage, but there are all kinds of units that might be Hidden. 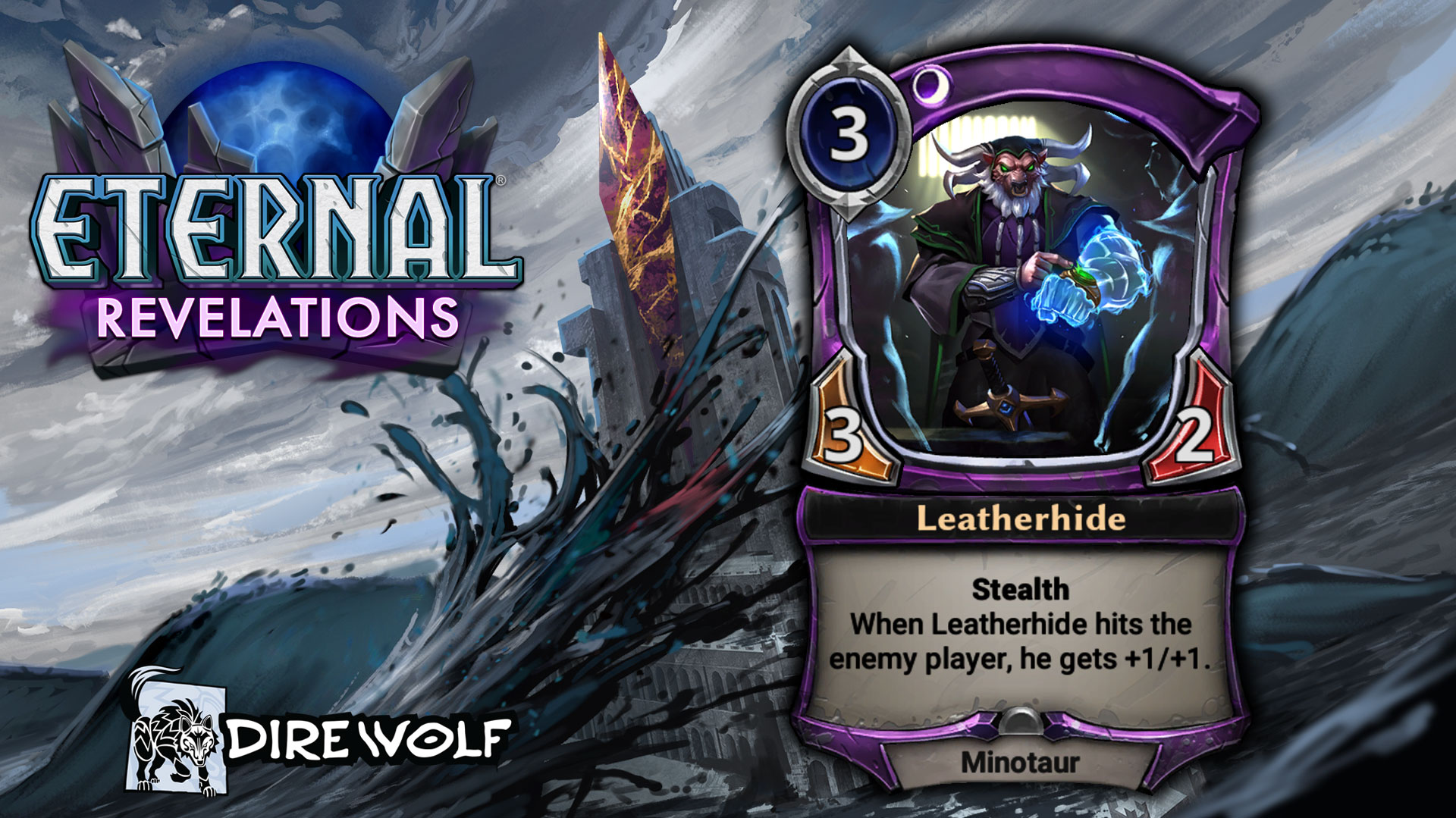 When you first play Leatherhide, he’s Hidden, but there are a couple of ways a Hidden unit might get revealed. 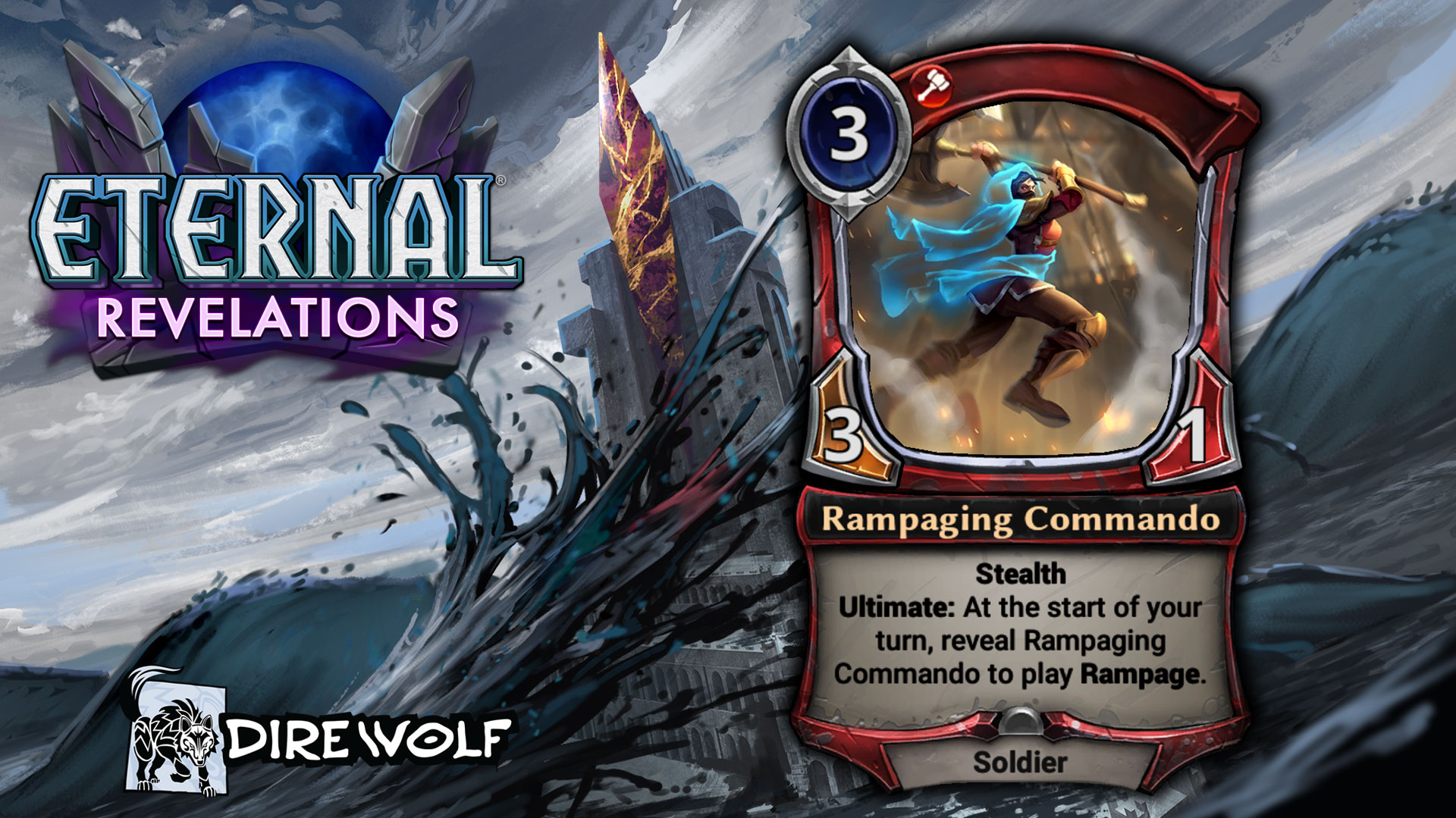 Rampaging Commando plays a free Rampage if you can keep it hidden until the start of your next turn. Then, you can play Rampage on the Commando to get a huge 6/2 on turn 4, or play it on another of your units (like say, a Passionate Stonehammer) to get a gigantic flying berserker! And since it’s happening at the start of your turn, you still have all your power for that turn for whatever extra fireworks you have up your sleeve.

But maybe you’re on the other side trying to stop all this. If we kill or reveal the Rampaging Commando first, it can’t reveal to play Rampage. Playing a spell on a hidden unit is really no different than a normal unit. If you drag out a Deathstrike onto the hidden unit to play it there, it’s going to die. Okay, but what about something like Vanquish?

Hidden units still have all their stats, skills, and attributes even if you can’t see them. In this case, Rampaging Commando is still a 3/1 Fire Soldier. If you have Vanquish and there’s no 4+ strength units, then the card won’t light up in your hand and you literally won’t be able to play it. But let’s say it’s Suffocate, that can kill a Rampaging Commando. If you start dragging out Suffocate to play it, you’ll see that hidden unit light up with a green circle like any other unit that Suffocate could be played on.

So far all the Stealth units we’ve seen so far have cost 3 and look like this while hidden. 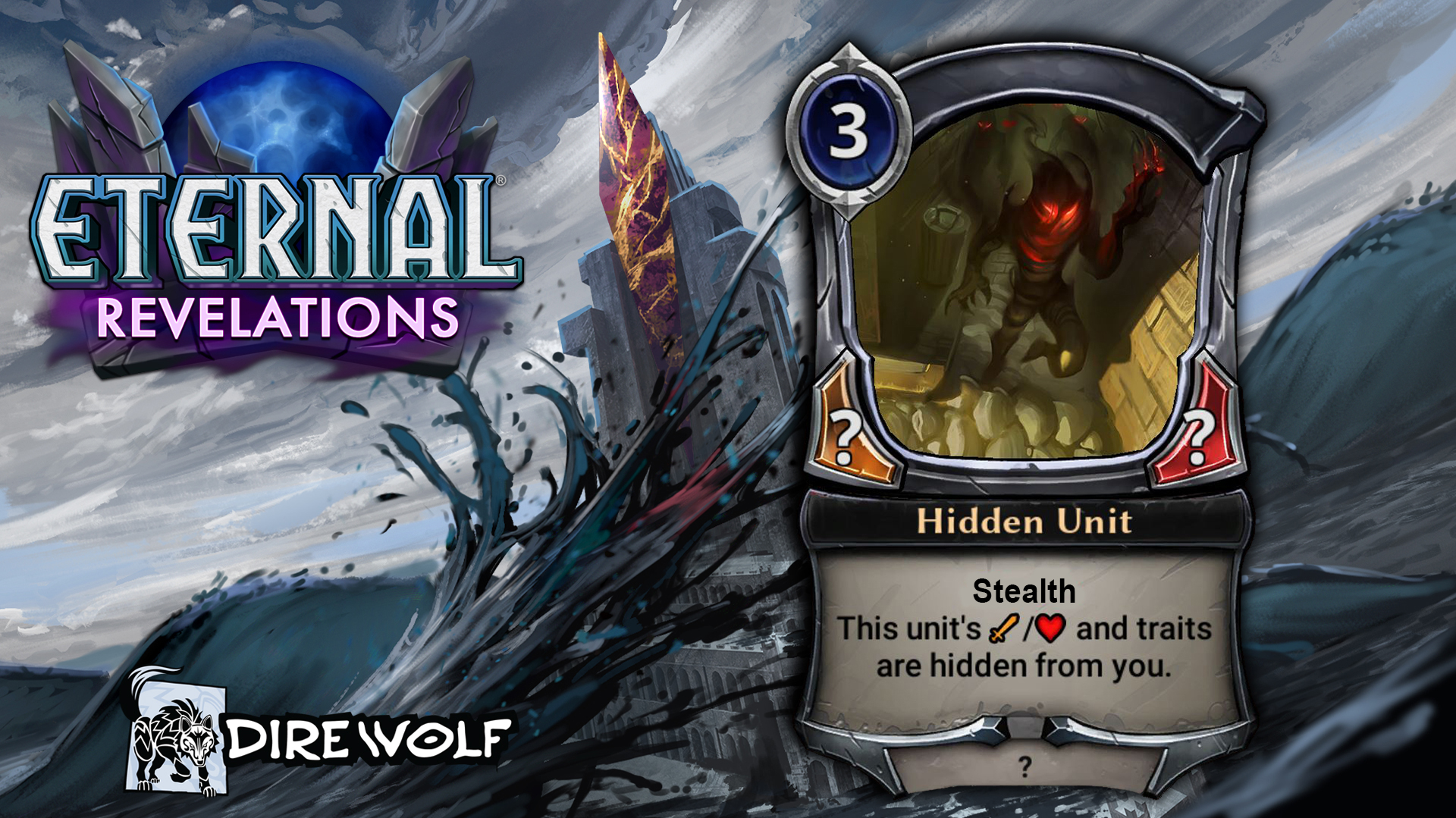 There is a second class of Stealth units, the 5-cost variety. They’ll look like this: 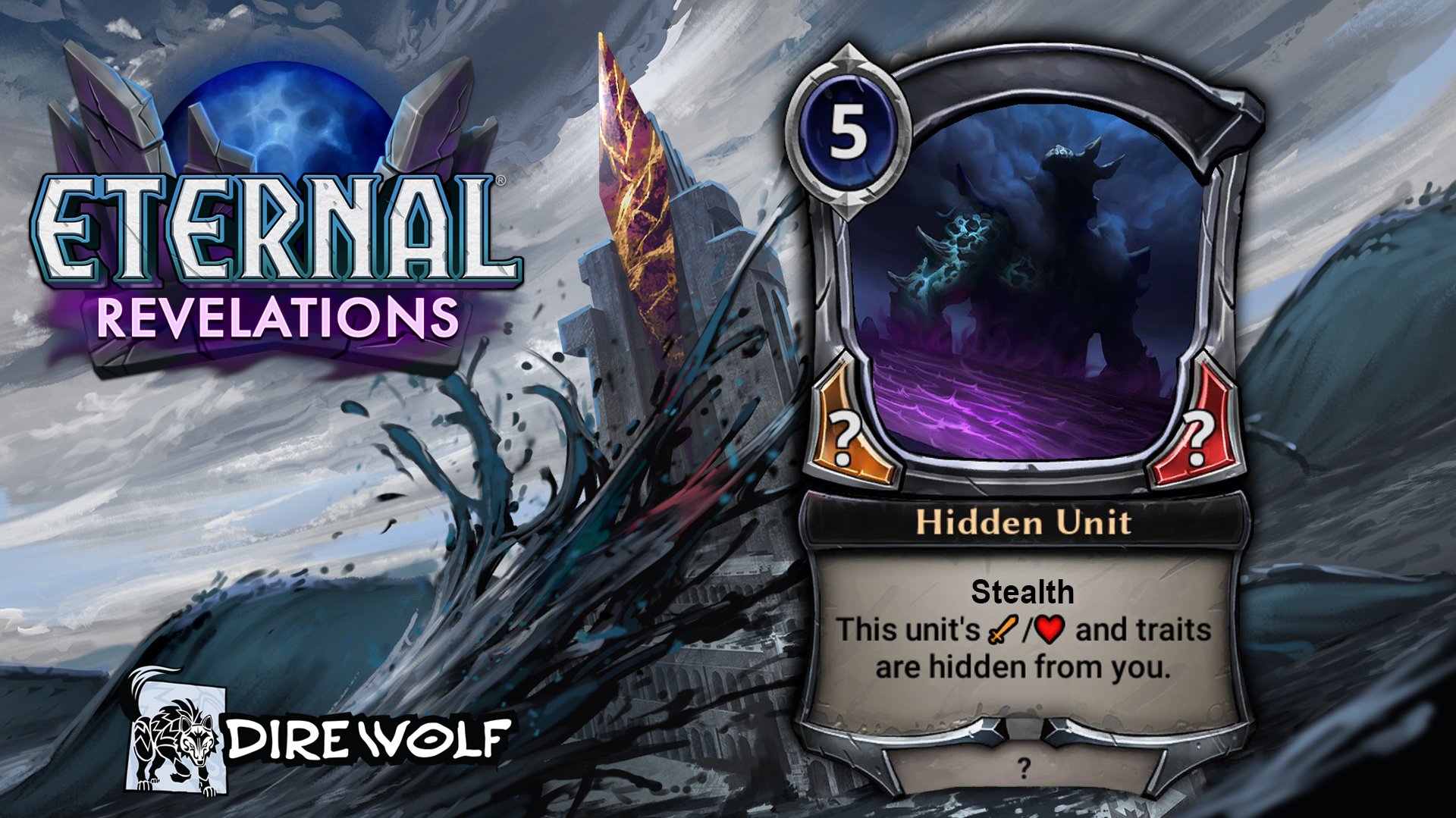 And here are some examples of those higher-cost Stealth units. 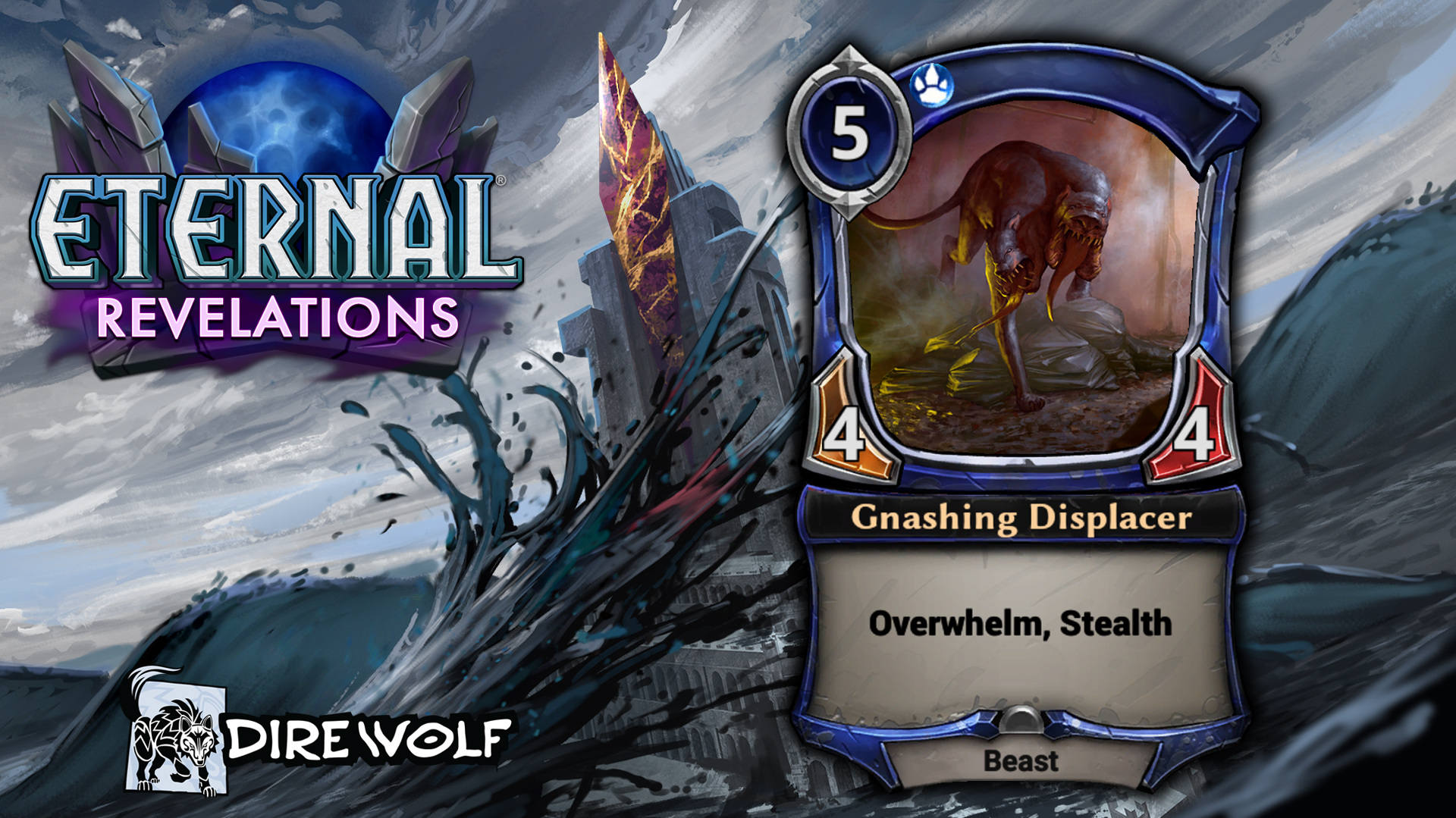 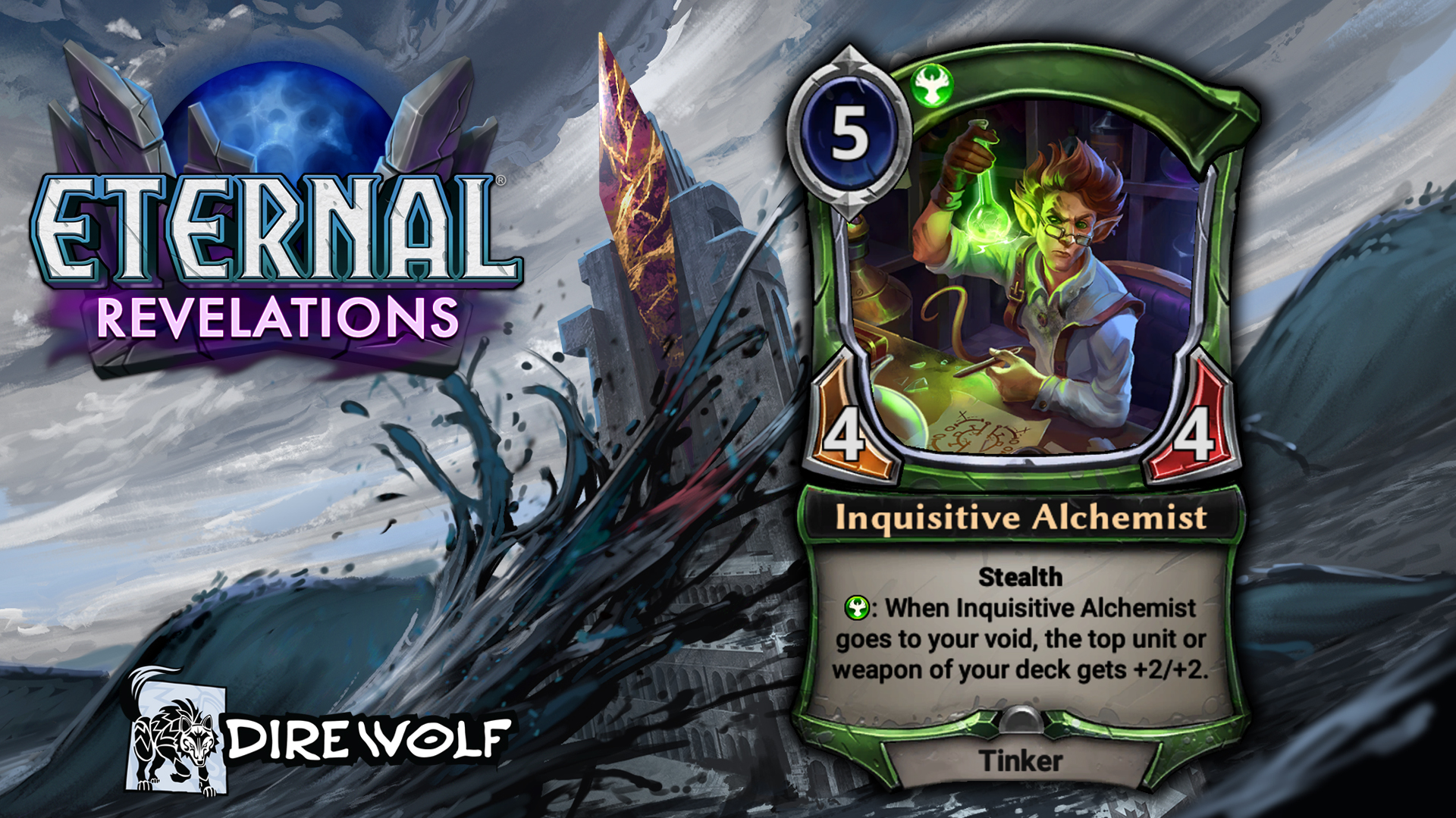 Bigger stealth units are the same way except that for these 5-cost units the break point is 5/5. So, you might see a 6/4 or a 3/6, but nothing so big that it just eats a 5/5 (even though some Stealth units really like to eat). 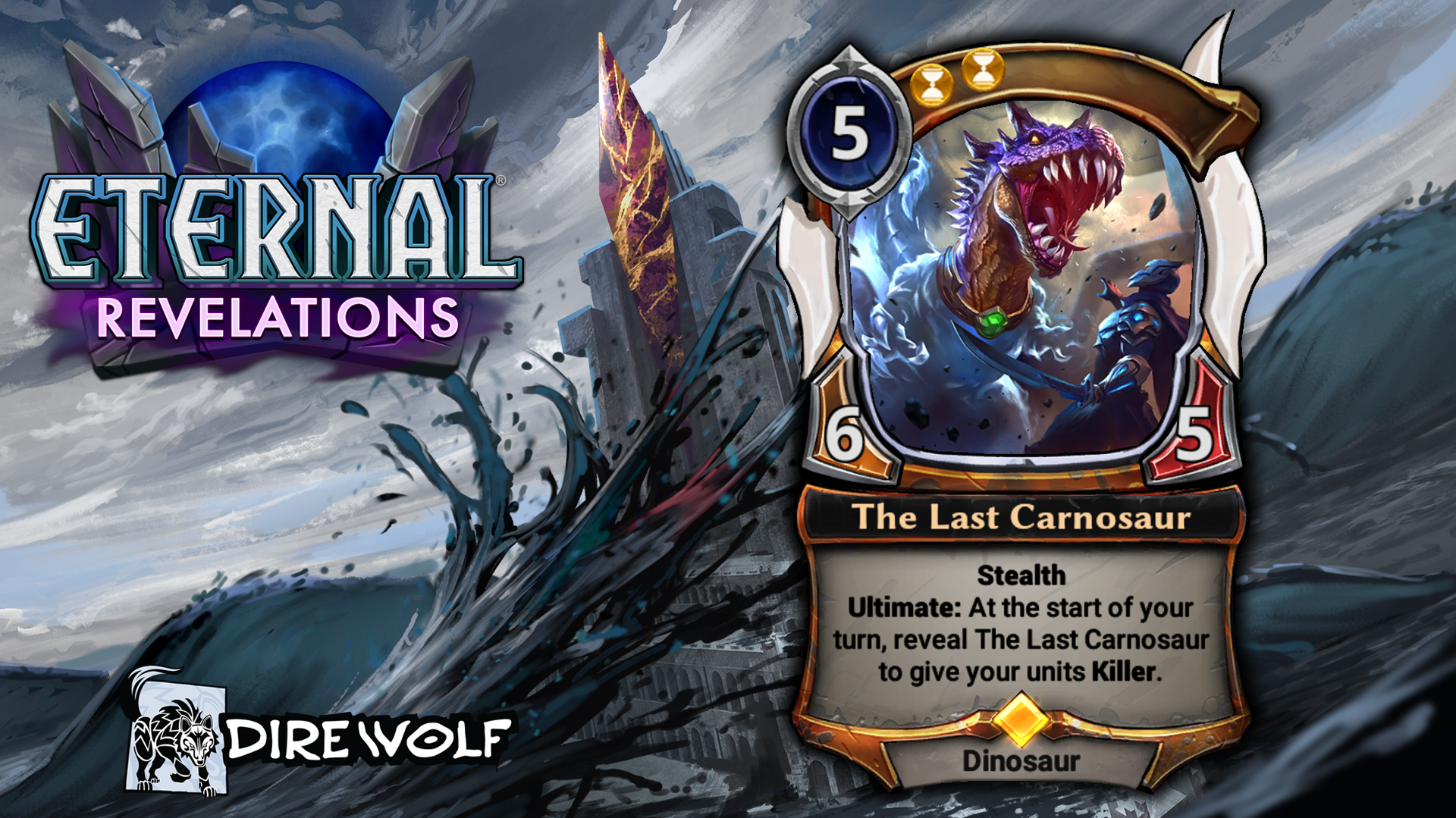 Of course, like any other unit in Eternal, they could always get buffed up. So a couple attacks with an Oni Ronin might mean you play a larger warcried hidden unit ready to unleash a nasty surprise. 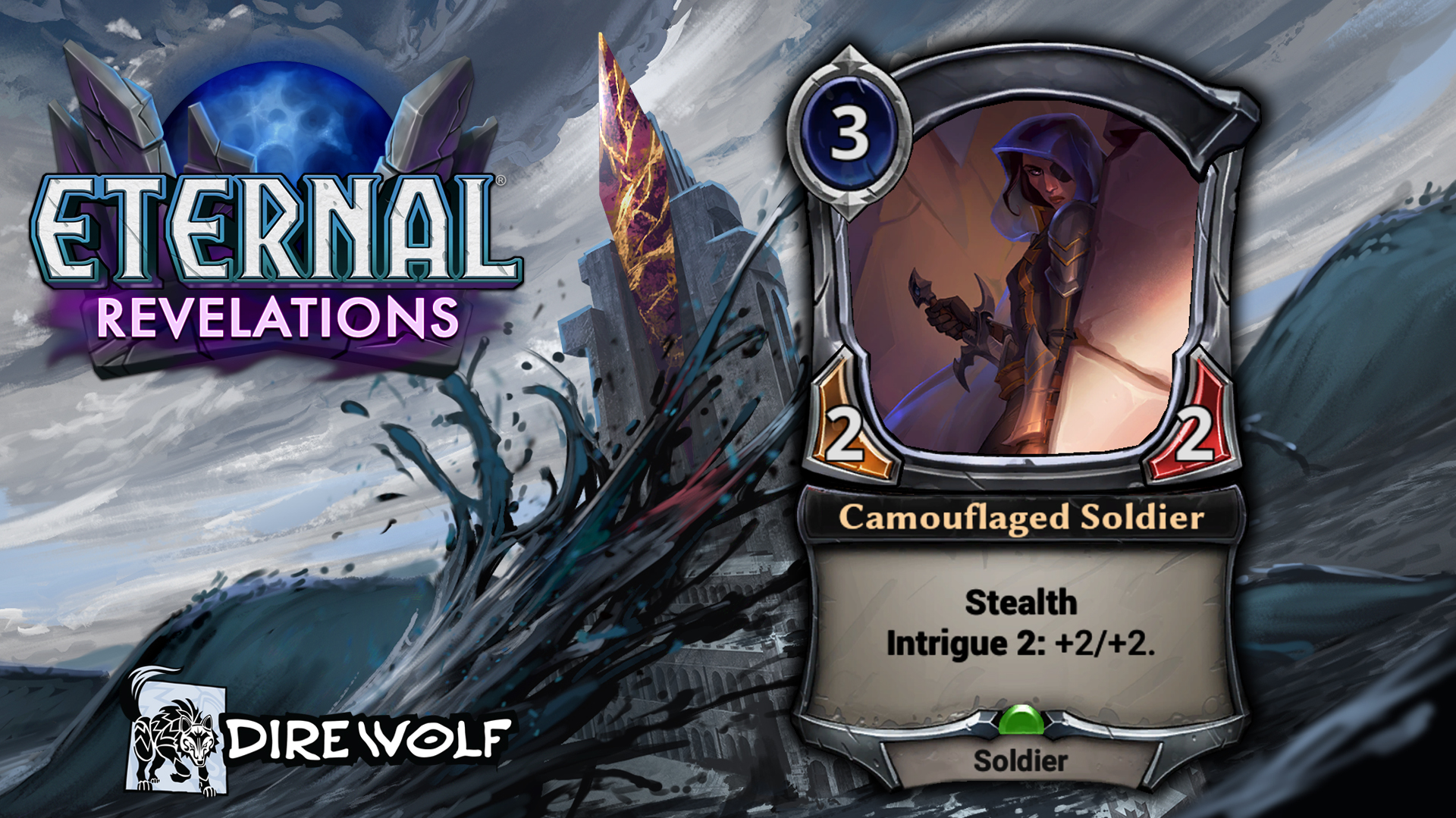 When you play a Stealth unit with Intrigue from your hand and have 2-power available, you’ll automatically spend that 2-power to give your unit the bonus of Intrigue. To the enemy it will look like you just played a bigger 5-cost Stealth unit. They’ll never know the difference.

Some intrigue bonuses are extra stats/skills to let you enhance your unit, but others are of a more exotic variety. 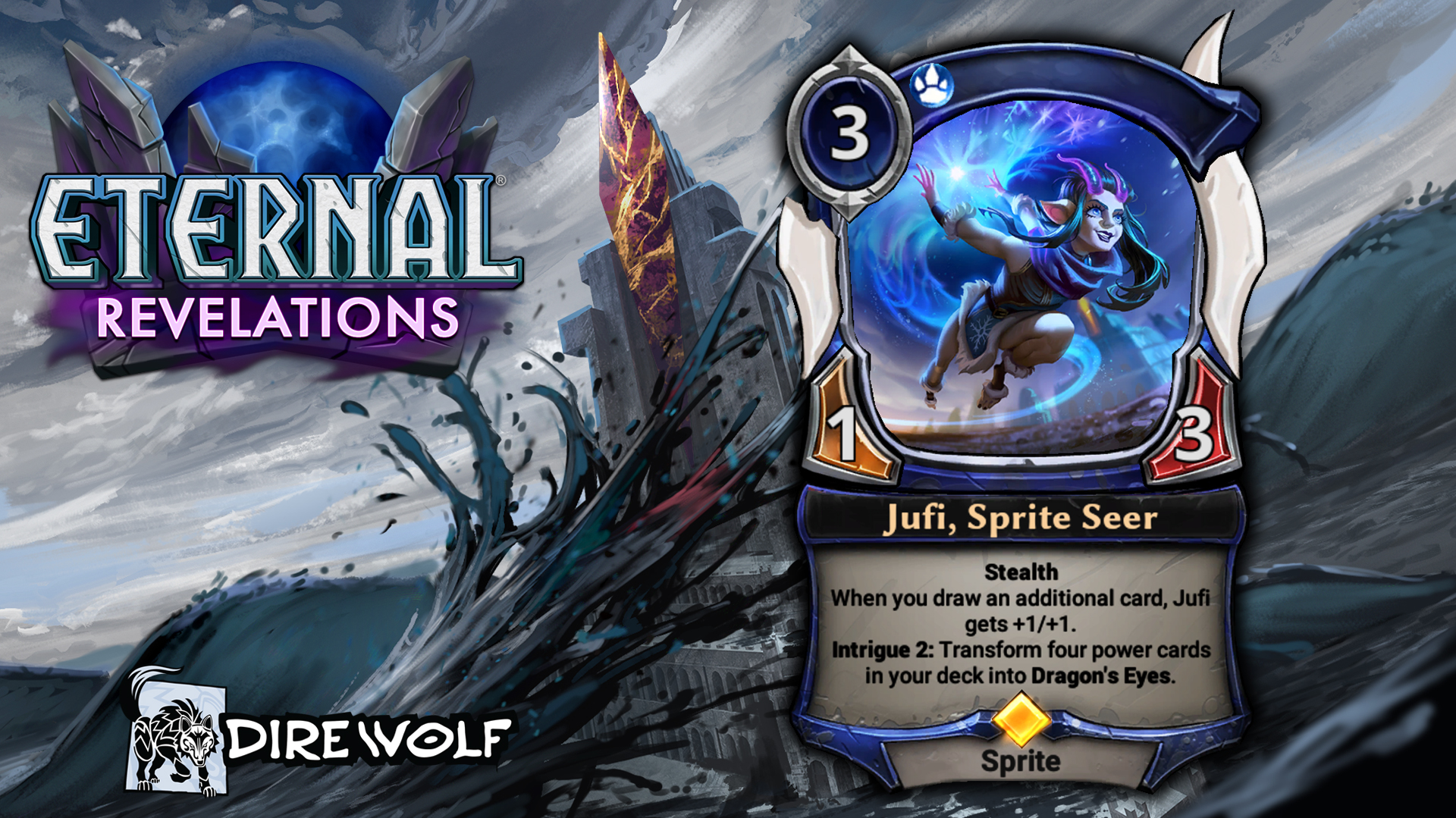 There’s a world of Stealth units to explore when Revelations arrives!