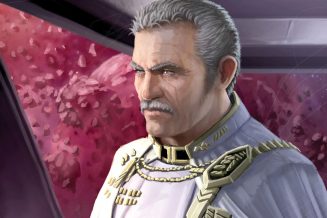 “Intelligence takes chance with limited data in an arena where mistakes are not only possible but also necessary.”

There have been several questions about how solo mode and 2-player modes work, so we wanted to do another Designer Diary to cover this topic.

As implied in the first Designer Diary entry, one of the goals for Dune: Imperium’s design was to avoid treading on familiar gameplay territory established by the classic Dune board game. And because that game excels with high player counts, we focused on a game that plays well with four or fewer players. The first versions of the game were tested at 3 or 4 players, because the game has two core mechanics – worker placement and Conflict – that present challenges for fewer players. Each of these mechanics is integrated into Dune: Imperium in a way that encourages player interaction, and with fewer players, there is a risk that the tension and drama fizzles out.

For worker placement, the way the game loses tension is fairly straightforward: if there are fewer workers being placed each round but the same number of spaces, then competition for those spaces is less competitive and dramatic. Some worker placement games address this by giving a different number of workers to players at different player counts, but this was a no-go in Dune: Imperium because of the way the deck-building integrates with the worker placement. Other worker placement games remove some spaces from the board at lower player counts (or add more at higher counts, depending on your perspective), but this also wasn’t a viable option for Dune: Imperium because the game has a lot of spaces that each do something unique and dropping some of the spaces would take something away from the experience.

The Conflict mechanism in the game is somewhat abstract but roughly approximates a “free for all” battle where there isn’t simply one clear-cut winner and everyone else is a loser. Instead, there are tiered rewards so that a player’s decision to participate is almost always interesting. For example, even if one of your opponents pushes very hard to win a particular Conflict, there is still a second place reward that you can aim for. This system loses a lot of its best qualities if there are only two potential participants. For example, imagine a world where two players are involved and there are two prizes at stake. Every round, you are essentially guaranteed a reward. In this world, you would likely see a lot of results where the second place player only dedicated the bare minimum number of effort to the Conflict. This would feel both mechanically and thematically unsatisfying.

The solution that was most appropriate for Dune: Imperium has also been done by other games: use automated opponents. An automated opponent addressed both the worker placement and the Conflict issues, by bringing up the effective player count to three: in a solo game, you’ll play against two Rivals and in a 2-player game, there is another House mixing it up with the two players in the game.

Before we get into the details of how this works, I want to express that one of the most important goals I had for the automated opponents was simplicity of running them. I am not fond of automated opponents where you must go through a series of rules to achieve a “relatively smart” play. I’d rather have the opponent play somewhat randomly but fast, as long as on average, it makes reasonable plays and the sum of its parts provides a reasonable challenge. I started a thread on boardgamegeek.com and asked people about their preferences there, including a question about fidelity of play vs. ease of play. I got a sense that this approach was going to satisfy most of the respondents, as gamers commonly request a balance of both ease of play and fidelity, and not too many people value fidelity high and ease of play low.

Two-Player – How it Works

Let’s talk about how two-player games work first, because solo games are somewhat of an extension of the two-player structure. In a two-player game, there is a third House fighting on Arrakis and making political deals: House Hagal. House Hagal has its own special deck and does not participate in deck-building the way that normal players do. House Hagal sends Agents to the board to block board spaces, but it ignores the effects of those board spaces. Instead, you simply follow the effects listed on the card that sent its Agent. 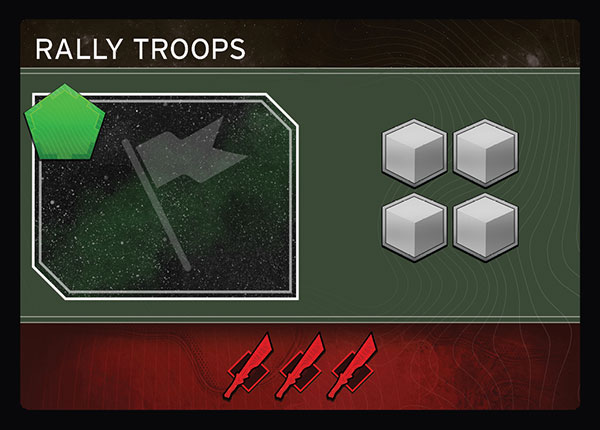 This means that House Hagal sends an Agent to the Rally Troops board space. (If it’s already occupied, just flip another card.) It recruits four troops as designated by the card. Again, you ignore what’s printed on the board space (which also happens to generate four troops in this case), and that includes the cost of the space. House Hagal neither accumulates nor needs to spend resources during the game. It does, however, recruit troops to its garrison and sometimes send them into battle. In the case of Rally Troops, it does not send any troops into battle. But, let’s say House Hagal flipped this card: 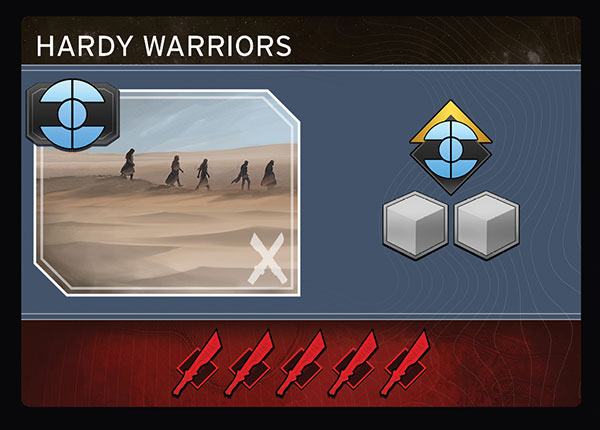 In this case, House Hagal would send an Agent to Hardy Warriors, gain 1 influence with the Fremen (and yes, it can acquire alliance tokens, sometimes making it harder for the players to gain alliances), and recruit two troops from its supply. Because this is a combat board space (denoted by the crossed swords icon), it will send those troops plus up to two more troops from its garrison (if it has any) into the Conflict. In this way, House Hagal will sometimes fight for the Conflict which means that the two players must be wary of its ability to claim rewards on the Conflict card.

Speaking of fighting for the Conflict, as long as House Hagal added any number of troops to the Conflict, it also gains the ability to get one more card flip at the start of the Combat phase, adding the number of swords shown on the bottom of the House Hagal card to its combat strength.

Solo Play – How it Works

In two-player games, House Hagal doesn’t actually try to win the game. It exists to add tension to the game, but I tried to add a minimum amount of upkeep for the players to deal with. Thus, House Hagal doesn’t collect resources and it doesn’t gain victory points. But for Solo mode, the design goals are quite different. Here, the automated opponents need to be fighting for the victory because nobody else is! So, that means Solo play comes with a bit more management for the player, however the methods are very similar to two-player mode.

In Solo play, you’ll choose one of four difficulty levels to play on, and you’ll pick two rival leaders to play against. These Rivals will work somewhat like House Hagal does, even using that same deck to drive their actions. They still don’t need to spend resources to send Agents to the board, but they do accumulate resources from several types of sources, and can convert those resources into Victory Points.

The first way they can accumulate resources is via the Harvesting card in the House Hagal deck: 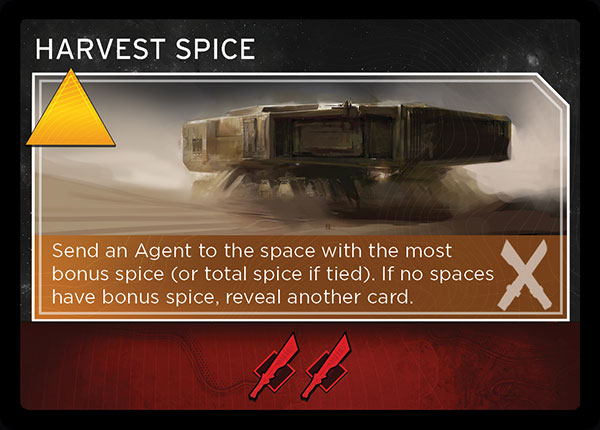 In a two-player game, House Hagal will use this card to act as a “spice spoiler” and take away the best supply of spice on the board, which keeps the spice supplies at a reasonable level for the two players in the game. Hagal doesn’t keep that spice; it’s simply returned to the bank. But in a Solo game, your Rivals will use this card to amass a supply of spice, and potentially convert it into a Victory Point. Rivals can convert any of the following (intrigue cards, water, Solari, spice) into a Victory Point:

The second way your Rivals can claim resources is by fighting for Conflict cards. Imagine that Siege of Carthag is the current Conflict: 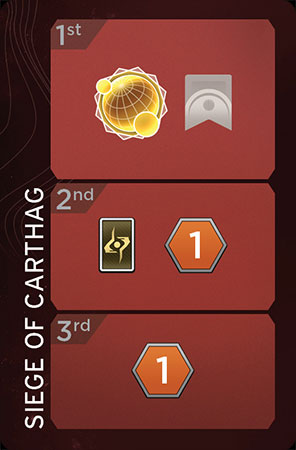 If a Rival wins this Conflict, they immediately gain 1 Victory Point and take control of Carthag just like a normal player. Which means it may provide a drip of Solari to them for a while, and perhaps give them a Victory Point if they reach 7 Solari. So, you’d much rather win this than allow a Rival to win. However, even if a Rival takes second place in this Conflict, that one Intrigue card and one spice might someday turn into Points.

Finally, only the leaders who have resource-based Signet abilities are viable Rivals, because in a Solo game, you will play with three Arrakeen cards in the House Hagal deck that can trigger a Rival’s Signet ability.

So, for example, if you flip this card… 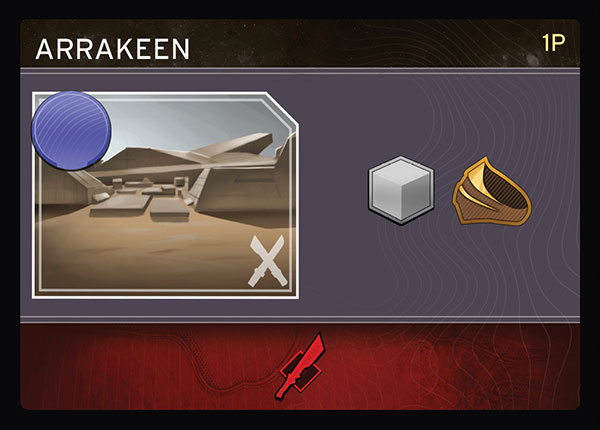 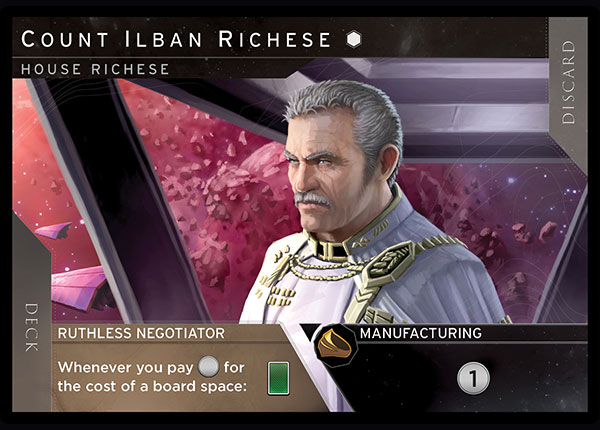 Count Ilban Richese will send his Agent to Arrakeen, recruit a troop, engage in the Conflict, and trigger his Signet ability to gain one Solari. So, if it’s late in the game and Richese has 6 Solari in his supply, you might want to think about heading to Arrakeen.

While there are a few other details regarding two-player and Solo modes in Dune: Imperium, we’ve covered the vast majority in this article. But one more thing. You may know that at Dire Wolf, we have an extremely talented team that also makes computer games and some great digital adaptations of popular board games. For Dune: Imperium, we’re making a companion app to make these modes even simpler to play. The first features of the companion app will simply be to convert the House Hagal deck into app form. So, you can tap your tablet or phone to draw cards and reshuffle the House Hagal deck for both modes of play, if you prefer that. We’re also exploring some other fun companion app functions and gameplay modes for Dune: Imperium for future versions of the app, so stay tuned!

If you’d like to ask questions and join in the conversation about Dune: Imperium and about solo and two-player modes, head over to the Dire Wolf Gaming Discord and to the Board Game Geek forums.