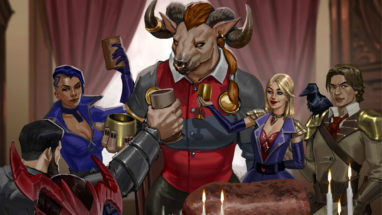 Heroic Event: Hero In the Mirror

This holiday season, we’re hosting an extra special heroic event in Eternal: Hero in the Mirror!

We’ve also got a brand-new lore post for you at the end of this article! 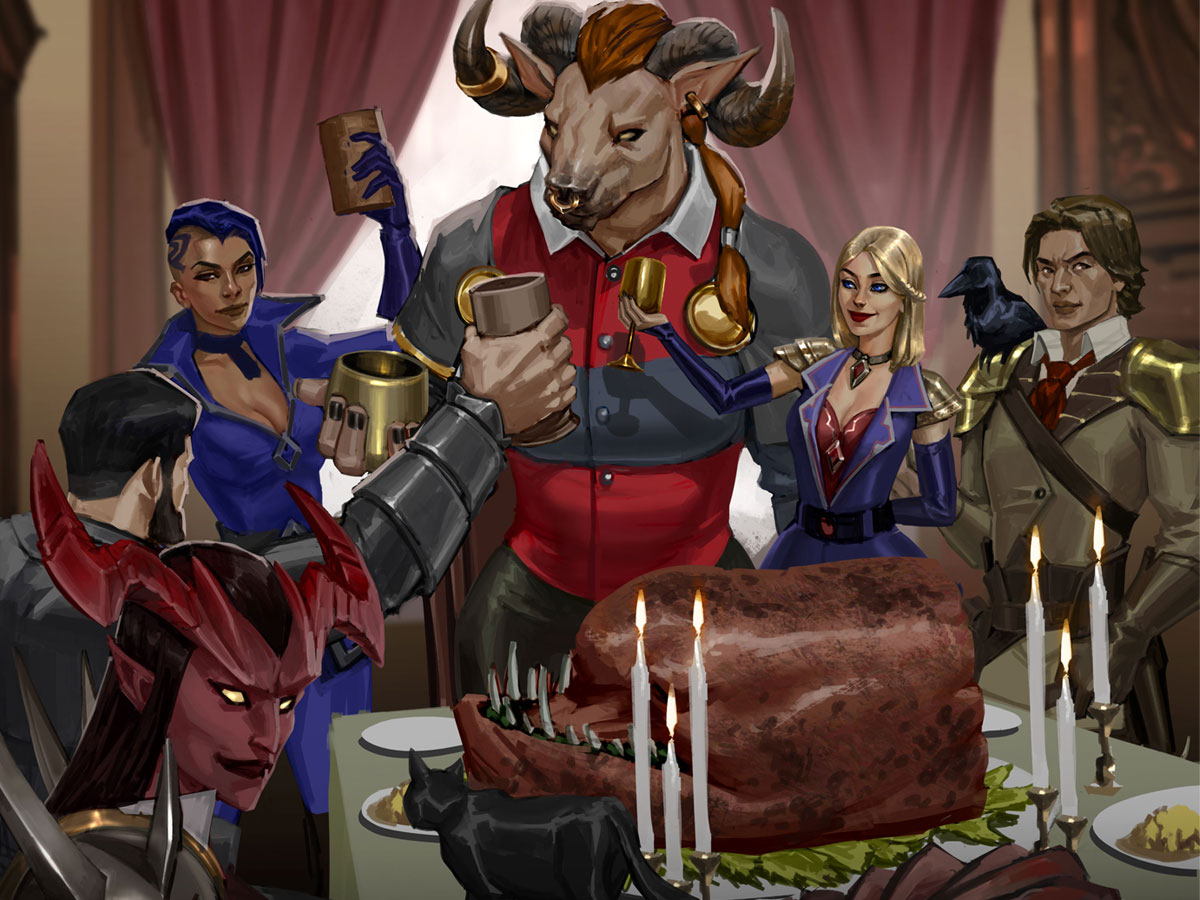 The Heroes of Eternal have become trapped in the Quicksilver Gateway! Can you free your Hero from this magic mirror? When entering the event, you will choose a Hero from your collection (or craft a new one) and from then on, your fate is tied to theirs!

After selecting a Hero, you will craft a deck that meets the following requirements:

You will begin games with 30 health, and your Hero will begin trapped in the Quicksilver Gateway. But don’t worry! You can rescue them by paying 3 power to draw them! Doing this will give both you and your Hero Aegis. If your Hero already had Aegis, it will get +1/+1 instead.

Each Entry in this event will include an alternate art copy of Devour, win or lose! If you place in the top 500 on the leaderboard, you will also receive four premium copies! 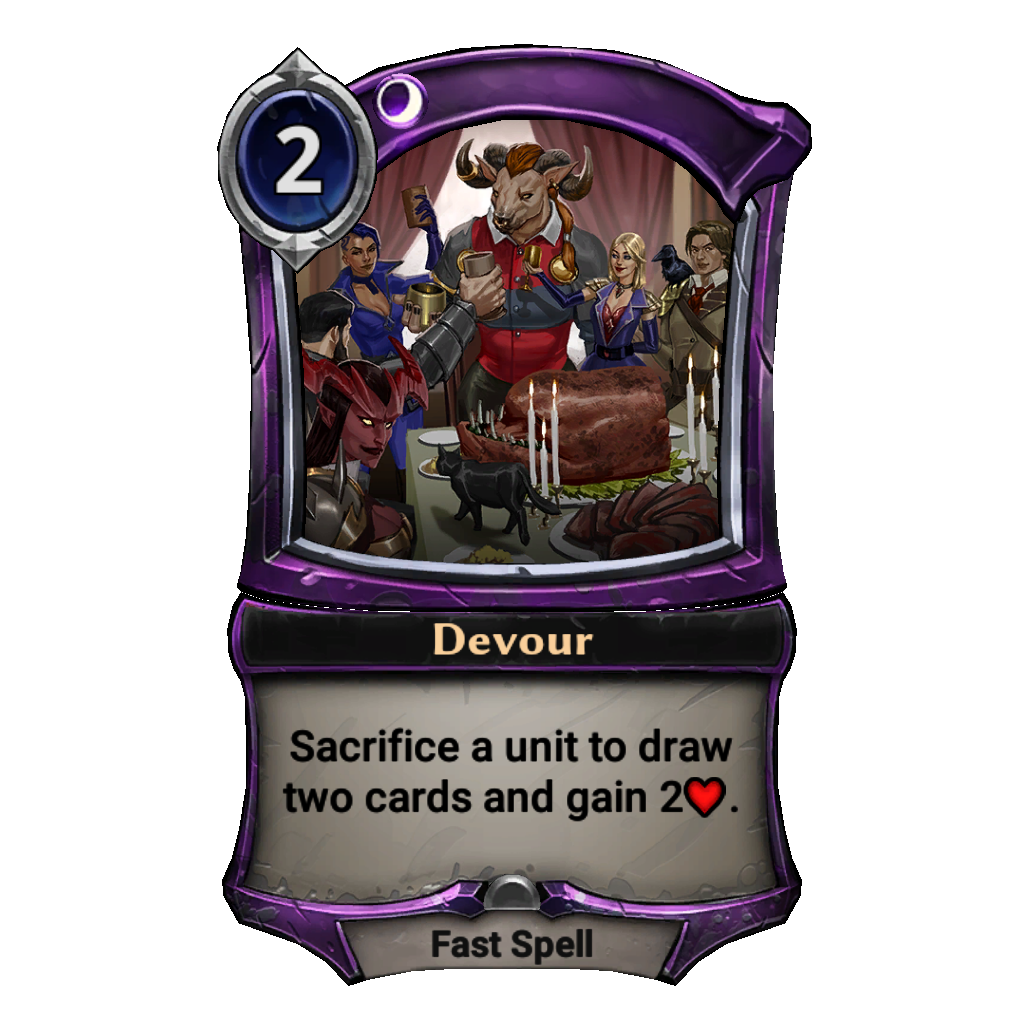 Free your Hero From the grip of the Quicksilver Gateway and battle for glory in the Hero in the Mirror Holiday Heroic Event!

Every player who logs into Eternal during the event period will receive one random Heroic Theme Deck bundle for free!

If you want to collect more of the Heroic Theme Deck bundles, they will all be available for purchase from the Eternal Store for 6000 Gold or 500 Gems.

Here are the full event details:

Select your Heroes and prepare for battle! The Hero in the Mirror event begins Thursday, December 23rd!

The ornate metalwork stood stalwart and ready to defend against a threat long past. The crumbling wall it was fastened to dwarfed a statue eight feet high and adorned in a chiseled cloak. Svetya looked over the pedestal the statue stood on with curiosity. Its inscription had long been tarnished and brushed away by a mixture of the elements and time. A monument to a deity or figure lost forevermore.

She ran her fingers against the cool stone before she returned to her compatriots. They surveyed a massive doorway of rotted oak just beyond the metal gate she had admired.

“Some of you will stand watch here, keep an eye on the horses, warn for trouble,” Vara said to both her and Svetya’s troops. A pair of each gave a nod to her. It would not do well to lose their horses so near to the Shadowlands and so far from any but desperate homesteaders.

Svetya moved past the briefing to find Deleph looking over a toppled statue with its head missing. Chunks were scattered across the stone floor illuminated by torch light. She put a hand on his shoulder and he pulled away. She frowned.

“Talir might help, you know,” she offered in a soft tone. Coslo shrugged and kept his gaze on the statue’s remains.

“Every single one. Every touch against the stones… Svetya, the pain… you don’t know how it felt,” Coslo replied as if far away. She moved to stand in front of him to block his view of the headless monument.

“Your exact pain? No. But that doesn’t mean I don’t also know suffering, nor is this a competition. I know loss, I know hurt, just as you,” Svetya said and looked to Vara still speaking to her soldiers. “I know of disappointment that can lead to a slice of hope.”

“The Waystones were supposed to give me answers. Instead they gave me nothing but enhanced pain, enhanced confusion, nothing but more questions,” Coslo nearly growled and he moved to push past her, but Svetya held her ground.

“But they were fine. You said it yourself, that is good news. And when did you last interact with one? When you were a child. You can’t blame your past self for not remembering what happened, especially given that Severin…” she started then trailed off.

She waved a hand a moment then met Coslo’s gaze. Vara’s voice came through before Svetya could speak.

“Ready? I’ve already cleared out some traps, and Bhural is set,” Vara called over. Svetya nodded to her.

“We’re close, Coslo, I’m sure he’s here. Somewhere. Much as I hate to admit it… Vara has yet to  steer us wrong,” she said with a smirk to Vara. The shadow mage let out a laugh.

“Your confidence in me never falters, Orene,” Vara replied with a grin.

Svetya looked over the dark doorway with her compatriots on either side and unsheathed her knife.

Svetya brushed dry cobwebs away from her face and focused on her breath.

‘In. Out. Keep alert, not panicked,’ she thought.

She moved with careful steps, her knife held firmly. The flickering light of Vara’s torch danced against the stone walls of the ancient hallway. The stones of the floor were of a dark grey. Svetya’s brow furrowed and she stopped. She held up a hand and looked at a stone just in front of her right foot.

A small glint of metal came from the torchlight. The metal had been embedded into the stone, small enough to be ignored at a glance. Svetya motioned toward it and knelt down. She looked up from where the metal piece sat. The hallway opened up into an antechamber that led to a staircase going up. Svetya squinted at the ceiling of the antechamber and its stones.

“It’s a different composition,” Vara said lightly. Svetya nodded. The stone of the ceiling looked relatively newer with a small metal seam in the middle of it.

“A pressure plate… that opens the ceiling?” Bhural asked.

“Likely something to trap whoever trips it in this chamber,” Svetya said and leapt over the hidden pressure plate. The rest of her allies followed suit then she eyed the ceiling.

Svetya moved through the antechamber at a slow, calculated pace. Similar, smaller, statues to the one at the entrance stood in their chiseled cloaks like sentinels.

“Or, to give a false sense that the trap was successfully avoid-” Deleph started. He was cut off by the statues rotating toward the group with the creak of gears.

With a quick hiss, darts flew from an opening under the hoods of the statues on either side of the group. Svetya dropped swiftly to the ground as the darts cut through the air and whizzed past her.

She moved her gaze between them as they slammed into the stone walls.

“Is everyone…” she started then she followed Vara’s eyes. Bhural coughed as he sat wedged against the wall by a pair of swords. They had moved too quickly. What Svetya had thought were darts, were full swords.

“Bhural!” she called and launched herself at him. Coslo grabbed at her and pulled her back. Her foot missed another pressure plate with a small metal bit that jutted out.

She instinctively pushed back against him a moment then forced herself to calm down, to let her anger and sorrow mix and hold her in place.

Bhural moved to say something but a soft gurgle escaped and nothing more. He was gone.

“We… have to keep moving,” Vara said after how long Svetya wasn’t sure. She took a breath and looked at Coslo who held an equally somber look. She moved to meet Vara at the antechamber’s exit, mindful of stones on the floor.

“Some of these traps are new, he’s here,” Svetya said coldly. Coslo and Vara nodded in agreement. Mourning would come later.

The Orene pressed on into the darkness.

Svetya moved past massive columns of stone and her allies flanked behind her. A circle of sconces lined the immense room. It reminded her of her throne room save for the destroyed marble statues scattered across its floor.

She held her breath for a long moment and kept her gaze forward. Steps lead up to a dais where the large, shining Quicksilver Mirror resided. It stood immaculate and beautiful with a magical aura shining brightly blue.

Upon the surface was a figure Svetya did not recognize. Behind him stood a room not dissimilar to the one she stood in yet its stone was well maintained. Bright illumination from countless sconces sat behind the man. The same place… yet altered, different?

“Azindel,” Vara’s voice came behind Svetya hard, rough, with a storm of rage bubbling at the surface.

“You have completed the tasks I set quite well, my fox,” the bald man in the mirror spoke. Then he frowned. Svetya cursed under her breath. They had been seen.

“May you survive what comes next,” the man said. A second later his image dissipated from the mirror and left only ripples of silvery blue.

Svetya launched herself forward at the red cloak and tackled the figure before they could react. She fell to the ground with her target, her hand slipped up to grip their throat as she looked to glare into the eyes of her prey.

“Damn you, monster, I shall-” she began. She had dreamed of this moment. Would it not be so easy to slice out his heart? Destroy his lungs? Bleed him out?

Her knife hung in the air.

“You’ll what, sister?” Camrin spat through gritted teeth, sprawled on the stone floor in Svetya’s grip.