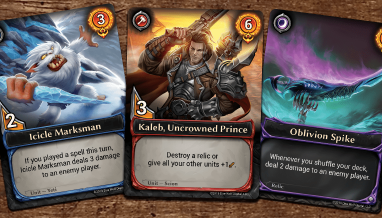 In previous Designer Diaries, we’ve looked at Eternal: Chronicles of the Throne as a whole. Today, we’re focusing on the “full-table” experience, and the unique challenges and opportunities presented by designing a deck-builder with multiplayer play.

Pull Up a Chair (or Four)

The core gameplay of Eternal: Chronicles of the Throne is a tense back-and-forth battle, inspired by its sister game, the digital Eternal strategy card game. Like that game, we initially imagined Chronicles as a one-on-one slugfest. But as we spent time in development, experimenting with different ways to play, we had so much fun with multiplayer that we decided it just HAD to be a part of the base game!

We figured out early on when designing multiplayer that we wanted to try something different than the standard free-for-all where players could attack anyone they wanted. While that kind of system might add interesting political decisions, it risks overshadowing the core game play, making deck building and other strategic decisions feel irrelevant in comparison. It can also lead to players feeling helpless when other players team up against them.

The final nail in the free-for-all coffin was that it would create an overly complex game state. Because attacks are not resolved until the end of the defender’s turn in Chronicles, the table would be full of units attacking every which way.

With free-for-all out, we eventually settled on a system where players would attack the enemy to their left and defend against the enemy to their right. This system preserved interesting attacking and blocking decisions without the messy board state or risk of players feeling ganged up on. 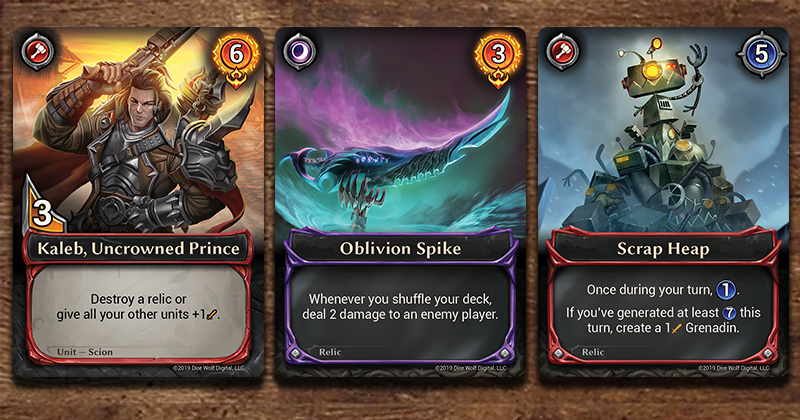 Individual cards like Kaleb, Uncrowned Prince, present unique decisions in multiplayer. Sure you could strengthen your army to attack the player to your left, or protect your health total by destroying Oblivion Spike on your right. But if you think the game is still in its early stages, the best approach may be to remove the Scrap Heap across from you, preventing its owner from building an unstoppable deck.

Going into multiplayer testing we knew that “turtling” (playing defensively) was going to be a powerful strategy. Eliminating a single enemy surely can’t be as important as staying alive yourself. Rewards for eliminating players called Bounties were added to encourage aggression and give more paths to victory than blocking and crafting the perfect deck.

Taking a Bounty gives a player 5 extra health and the ability to select any card in the Forge Row and add it to their hand. Aggressive strategies in multiplayer deck builders can often have two problems: First, they can fall behind on health by prioritizing applying attack pressure on one specific opponent. Second, their card quality can suffer as they buy big units instead of cards that generate buying power. The Bounty rewards in Eternal: Chronicles of the Throne help offset these things, giving them the best card available in the Forge, and some breathing room to use it. 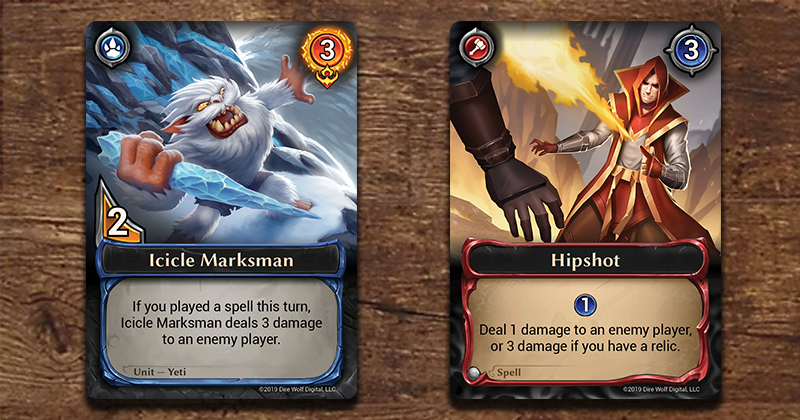 Bounties are given to the player to the right of the eliminated player regardless of who dealt the finishing blow. This means direct damage cards like Icicle Marksman and Hipshot can’t be used to steal Bounties from other players. However, well timed direct damage can be impactful in a completely different way: If you are able to eliminate the player to your left during your turn, all your units will attack the next player in line instead!

No matter how many enemies you face across the table, careful strategy and bold decisions can lead you to victory!

In the next designer diary, we’ll dig into the faction identities in Eternal, their strengths and weaknesses, and how pairs of factions can complement each other.

Read more in previous Designer Diaries for Eternal: Chronicles of the Throne: