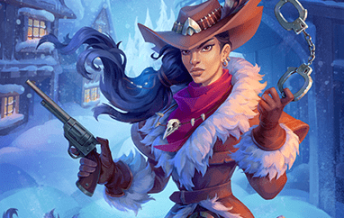 There are many ways to make yourself known: for deeds of valor, for bravery, and sometimes even for infamy. The many paths to notoriety are reflected in the new mechanic, Renown, where units who get a taste of fame reward you with additional stats, powerful effects, and more. Let’s take a look at an example: 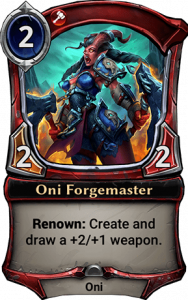 The Renown mechanic appears in the Fire-Justice-Primal alliance called “Ixtun,” and is worded as such:

“Does something the first time you play a spell or weapon directly on it”.

What that means is that the first time you play a weapon on Oni Forgemaster, or the first time you play a spell like Finest Hour, or Ghostform, or even Vara’s Favor, the Renown ability goes off. In this case, that’s drawing a Heavy Axe, which you can then slam on the Forgemaster herself. Conveniently enough, you could also use that Heavy Axe on a different Renown unit, and gain the benefit of both Renown effects from a single spell!

Fame comes in many forms, and the Renown outputs vary wildly – here’s one on the more heroic side of the spectrum: 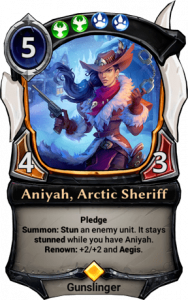 Aniyah stops one of your enemies in their tracks (barring Endurance, of course), and if you can enable her Renown, she becomes very hard to kill. Getting +2/+2 and Aegis means she can brawl without fear, and requires multiple cards from the enemy if they want to take her down.

Every good hero needs a villain, and Notorious Scoundrel is more than happy to step into that role. 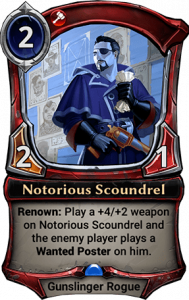 Notorious Scoundrel starts as an unassuming 2/1, but give him a bit of fame and all of a sudden everyone wants a piece of him. He becomes a mighty 6/3, and his picture goes up on posters all across the land. Of course, a 2-cost 6/3 doesn’t come for free, as the opponent will be amply rewarded if they do manage to take him down.

I did mention that Renown is an Ixtun mechanic, so Primal isn’t left out in the cold. Here’s Primal’s take on Renown, which goes in a completely different direction. 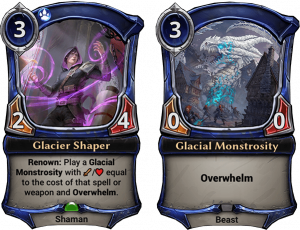 Shaping the glaciers is no small task, and once you power this up, you get a Glacial Monstrosity on your side. How big that Monstrosity is depends on how you achieved Renown, which gives you a substantial reason to lean on expensive cards to hit Renown instead of cheap ones. Spiked Helm may be a convenient way of protecting Aniyah, but Glacier Shaper would vastly prefer something like End of Hostilities.
Lastly, we’d be remiss if we didn’t preview a Yeti, so here’s a chunker for your viewing pleasure: 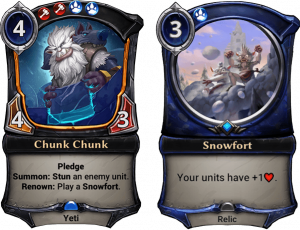 Chunk Chunk actually sports two new mechanics, starting with Pledge. That means that on turn one, you can play Chunk Chunk as a Fire Sigil or Primal Sigil, your choice. If you opt not to, and later get his Renown going, he builds a Snow Fort for you, which protects your whole team. Snowball is a flavorful way of making that happen, and he’s been on the receiving end of plenty during internal testing.

There are many ways to make a name for yourself using Renown, and we are excited to see what people choose. Will you utilize weapons, pump spells, or even removal (like Snowball) that you don’t mind pointing at your own units? As we see more Renown cards, we will get a better picture of the possibilities, and which pieces of the puzzle fit together best.