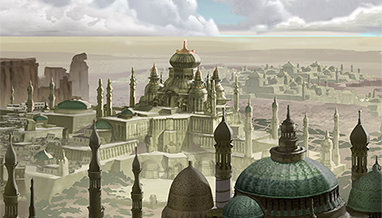 We’re drawing closer to seeing the full set of Defiance cards, but there are still some places we haven’t visited yet. For the first time, we are introducing a new card type to Eternal: Sites. Let’s explore what they offer: 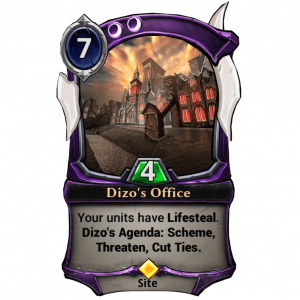 There’s a lot to take in here, and we will go piece by piece.

You play a Site like you’d play a unit, and it stays in play (until the opponent deals with it). It takes up two unit spots, so it’s twice as large as one unit.

So, what do Sites do for you?

Each Site does something while in play – for example, Dizo’s Office gives all your units Lifesteal. Where it gets really interesting is when you look at the Agenda associated with a Site and its Hero.

Dizo is a schemer, he doesn’t mind threatening people, and when all else fails he’s willing to cut ties completely.

When you play Dizo’s Office, you immediately get to choose and play any of those three cards. At the start of your next turn, you get to play one of the remaining two cards, then the turn after that you play the last card. The turn after the last Agenda card has been played, Dizo himself shows up as a unit – after all, his Agenda is complete and he’s ready to take action. 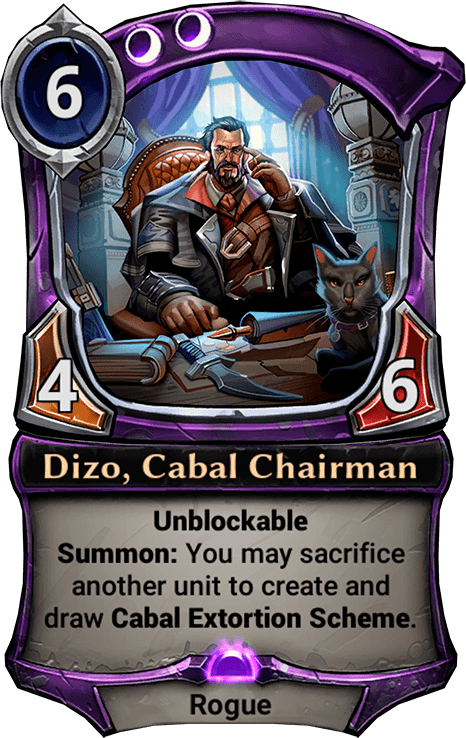 Fortunately, when an opponent’s Site hits the board you’ve got some options to prevent its Agenda from being fulfilled. Each Site starts with a Durability number – in the case of Dizo’s Office, that’s 4. When you make your attack for the turn, you must choose whether you send all your attackers at the enemy Site or straight at your opponent. You can’t split your forces during an attack – so choose your target wisely!

When it’s your Site that’s under attack, you can block as normal, but any damage that gets through to the Site is permanent and does not heal at the end of the turn. For example, if the opponent attacks Dizo’s Office with a 2/2, the Durability of Dizo’s Office is permanently reduced to 2. If a Site hits 0 Durability, it dies immediately. 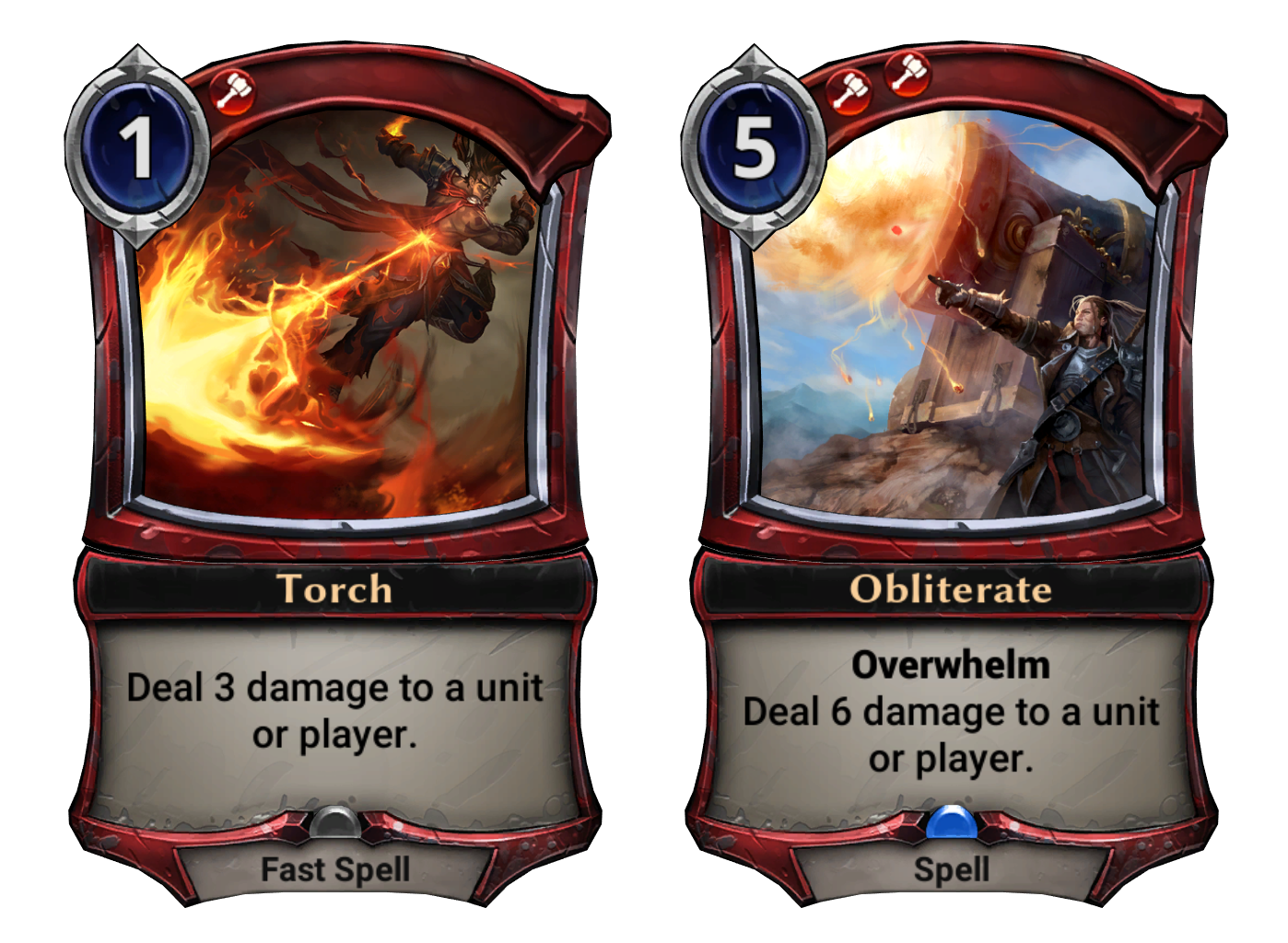 Torch and Obliterate will be changed before the release of Defiance, and cannot deal damage to Sites. When developing Sites, we had more fun and liked the gameplay better with these changes.

Some examples of cards that can damage Sites: 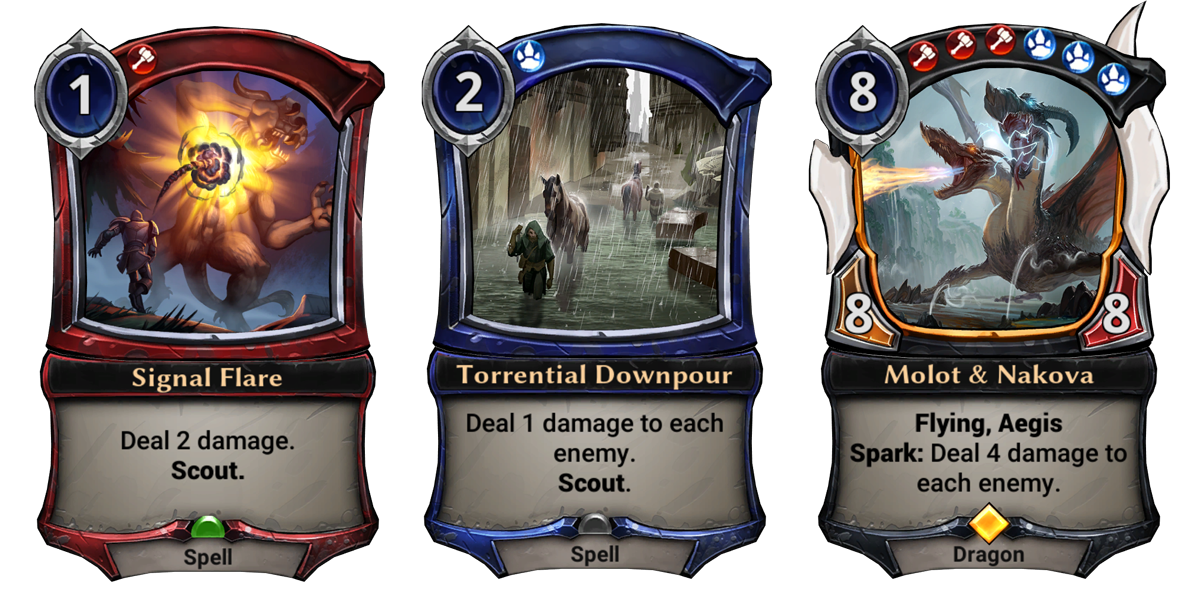 Can you have more than one Site in play at once?

What if your board is full of units?

How does Berserk interact with attacking Sites?

Can you attack Sites with relic weapons?

What if one of the spells on the Agenda has nothing it can choose?

We are excited for everyone to get to explore some of the many different places that make up the world of Myria, from the offices of criminal kingpins to entire cities and everything in between. Here’s another example (and one that would have died to Torch, as a matter of fact): 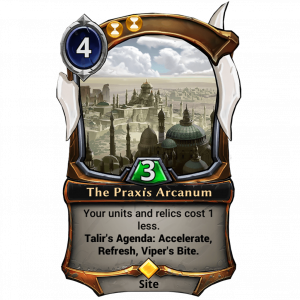 The Praxis Arcanum is a place of mystery and magic, and if you can keep it around long enough, Talir, Unbound is sure to make an overwhelming impact.

There are more Sites to come, and you’ll find some to suit a variety of agendas when Defiance comes to Eternal!