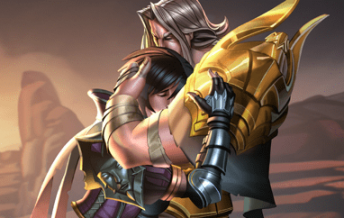 [UPDATE 10/18: The Reunion Test Tournament will now be available to players on Steam, Android, and iOS devices!]

Reunion consists of two stages: A Qualifier Stage that’s open to everyone, and a Bracket Stage that will feature the top 32 players from the Qualifier.

This system test is in preparation for expanding Eternal‘s tournament system to include mobile players. For the first time, the tournament will be available to all players on Steam and on iOS and Android mobile devices!

[NOTE: As with all players on all devices, players choosing to participate in this event on mobile devices do so at their own risk. We cannot guarantee connectivity or signal strength, and any losses or problems arising from disconnects or similar issues will be treated as final.]

Join Eternal game designers Patrick Chapin and Luis Scott-Vargas for broadcast coverage of the Bracket Stage on Sunday, October 21 at 11am MDT (17:00 UTC), live on Twitch!

Special Twitch Drops will be enabled exclusively on the DWD channel during the broadcast!