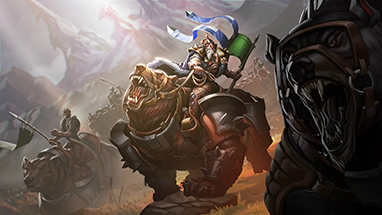 Wars are decided by many things. Allies. Resources. Tactics. Will. The rightness of the cause.

And some wars are decided by really big bears.

Meet the latest combatants to enter the fray, ferocious warriors from a distant land, trained from a young age to fight in tandem with their massive ursine mounts: the Kosul Brigade.

The Kosul Brigade Promo Quest kicks off today. During the quest period, your first PvP win of the day will reward you with a copy of Kosul Brigade. Once the promo period is over, you’ll be able to craft them using Shiftstone as normal.

We’ll be taming bears in Seattle at PAX West this weekend. If you’re in town, stop by booth 7405 to let us know what you’re planning on feeding Urska.