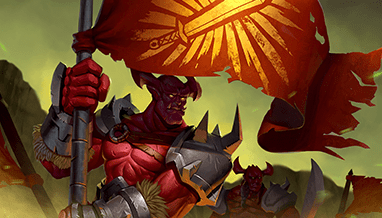 With The Fall of Argenport, Eilyn may control the city, but there are many who have fought for it on both sides. Today, I’m going to show off to you the power that these forces wield, and the tactics that they used to defend and attack Argenport in its final hours.

Power cards with additional abilities come from a storied lineage. The Standards are a new cycle of power that mirror the Monuments from The Empty Throne. Like Monuments, once you reach five maximum power, all the Standards in your hand and deck will transform into a new card. This time however, instead of getting a 5-power unit, you’ll be rewarded with a 2-power fast spell.

By playing Standards in your deck over non-power cards, you’ll mitigate the number of times you’ll get stalled on power. However, once you get to the later stages of the game, these will protect you from drawing too many power as you’ll instead be rewarded with a powerful Tactic spell from the transmute ability.

The Tactics that the standards transform into are more powerful than your average two-power spell. When you compare Clan Tactic to Lightning Strike , you realize you’re getting an upgrade of the two-power card you could have played in your deck.  You’re used to spending two power and dealing 4 damage to an attacker, but we’ve decided to pump up the effects on these a little. You’ll see this also when you look at Shugo Standard:

For fire, you could play Rampage in your deck, but if you instead include a copy of Shugo Standard, once you reach five power you’ll be rewarded with a more powerful Shugo Tactic. Not only are you getting the option of playing these as a power when you need to, you’re also getting spells that are upgrades of ones you could have played in your decks. 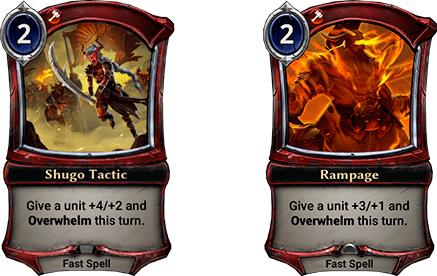 And there’s plenty more where that came from! Here’s the rest of the cycle:

Where will you take your stand? Whose banner will you fight under?