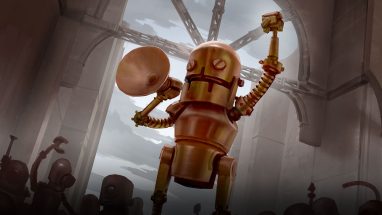 Thanks for the tip about that alloy. It’s fixed up that problem real good so I’ll have to buy you a drink or two when you’re down here. The Pumpwerks ain’t so bad, get out of your books sometime, yeah?

Other thing to tell, saw a strange thing at the Skimmer’s Tooth. Before you ignore it, I was only at drink three, thanks.

There were some Grenadin in the bar. The bizarre thing ain’t that they were there, it was what they were doing. Some kind of ceremony cheering on some special clanger that was good at combat. Them things are weird but this was just something else. You ever seen anything like it? Only seen them work and build and all myself.

Maybe the folks in the Mids are cooking up some crazy stories alongside their skimmer meat, gettin’ these Grenadin thinking some crazy things? Can’t say it’s not good for entertainment to watch ‘em. 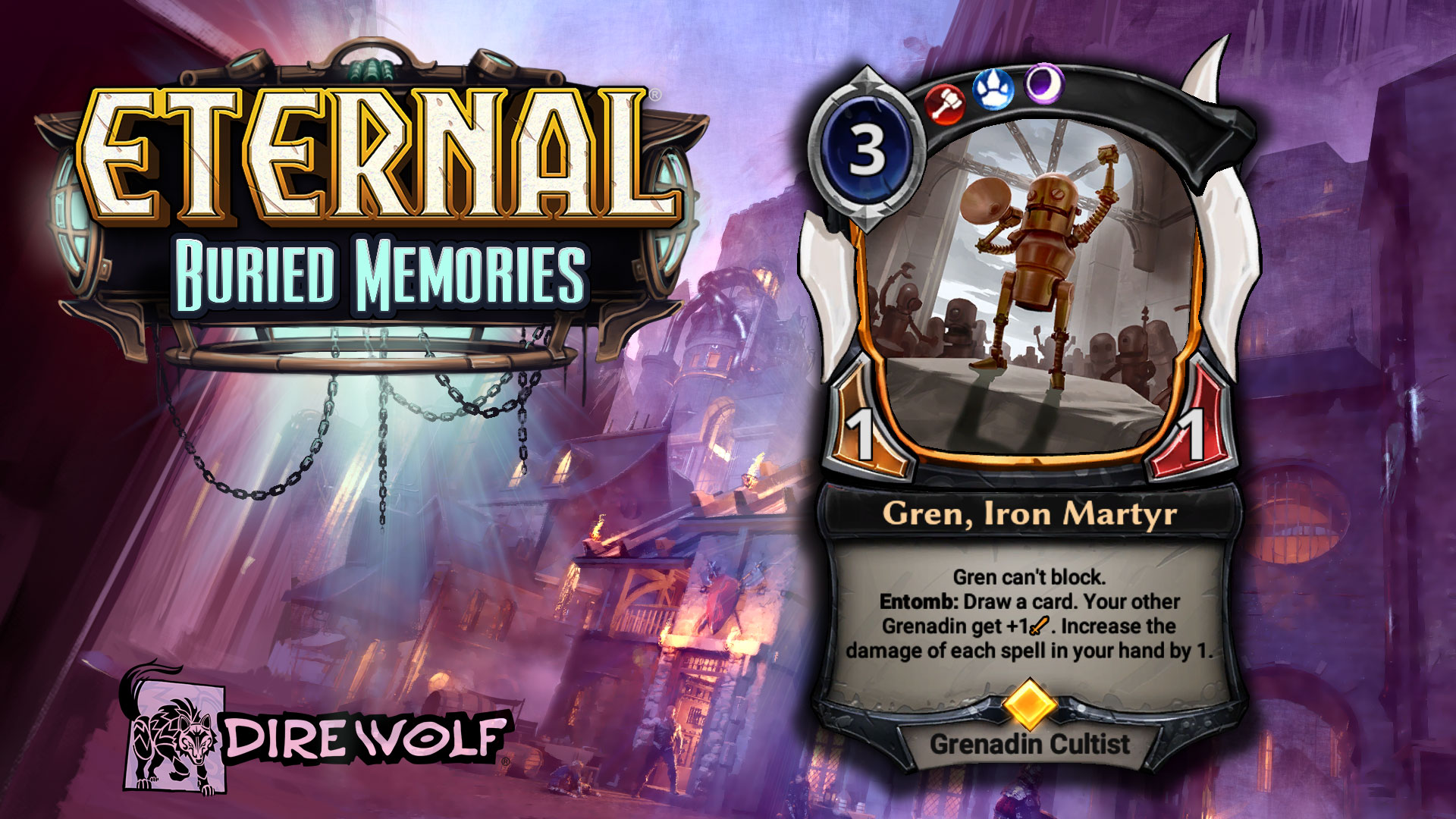 Gren felt a rush of joy flow through it with each step on the path up to the immense ruined mansion. It recalled the cheers of its metallic compatriots in that small dwelling where organics imbibed. Gren looked behind and noted how Hifos, the Asri Ally, clutched his map and eyed the building unenthused.

“You seem uncertain of this place. Are you new to the dangers of the Downdark? Gren shall protect you!” Gren said with a firm nod.

Hifos responded with a noncommittal grunt before Dichro, the Winged One, spoke.

“Being cautious is wise when you don’t know your foe and like staying alive. Get going,” Dichro said. Hifos gave a nod to that. Gren readjusted its small pack and continued up the steps.

Gren heard the rush of flame behind itself as the Asri Ally lit a torch. The Mandrake let out a flowing melodic hiss and glided further away from the soldier.

“Euryd should keep herself far from such things, though Gren knows that the brave Asri Ally would not dishonorably hurt you,” Gren called out. Hifos shook his head without a response.

Gren watched and listened as Euyrd attached herself to a wall and opened her tooth-ringed maw. She let out a series of light humming tones, then slowly relaxed and detached from the deteriorated stone. Her song continued as she slinked along and kept far from the torch.

The group moved through the mansion’s main entryway. It was covered in brown and black vines that Gren figured had attempted beauty and aesthetics for visitors in the past. Gren sliced them apart with a dagger.

“Do not worry Euryd, Gren shall not use this mighty blade on the Singing Vines. For Gren protects those that are at its side in combat to bring glory to the Grenadin!” Gren called to the Mandrake.

The Singing Vines made a low sound and Gren felt a twinge of indifference echo through itself followed by a touch of uncertainty. Gren ignored the feelings and continued forward away from Euyrd.

Gren clasped its dagger tight with the fervor of renown and battle.

Its light clanking was muffled by more dead plant life on the marble floor of the former home. The louder, heavier footsteps of the Big Metal called Vulk came through more clearly. Broken windows that once let sunlight into the highest point of Bastion now held only blackness and a swirling touch of purple in the dark.

Orange lantern light bounced against the ornate crumbling walls of the main foyer of the house.

“Weapons at the ready. You see something, you call it out. Be alert,” Dichro said. The Winged One’s words echoed down the hallway as Gren charged forward in search of foes. Honor and prestige to the Grenadin would be had this day!

It reached a set of stairs, sixteen of them in total, that led to a second floor above. The sixth and fourteenth steps were missing, likely from an organic’s ill-fated fall from the skylight above. The skylight now held neither sky nor light.

“Not sure if it’s up or down from here,” Hifos said. “Let’s start with the second floor then work our way down to the lower levels.” After a few moments the group had caught up with Gren.

“Increase speed to aid Gren to discover and dispatch of foes!” Gren replied.

The Asri Ally sighed behind them and Gren watched him unsheathe his sword.

“Excellent! That is a better approach than cautious walking, Asri Ally!” Gren exclaimed.

“Sensors indicate a presence in an elevated and advantageous position upon the stairs,” Vulk called out. 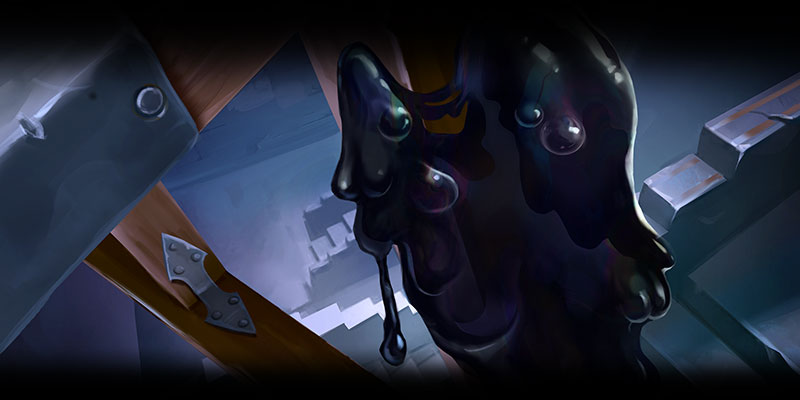 Gren scanned the staircase and landing above to see what the Big Metal meant. Thick, slimy, dripping oozes flowed down the stairs like sick, blackened water. Gren’s joy shifted into jubilation as the enemy outnumbered them. A writhing mass of swirling dark and death had split into numerous globular pieces.

A light hiss and swirl of steam came from the stairs as they further crumbled underneath the dark muck that was the adversary. Something pulsed in the center of each glob of muddy blackness. The broken pieces of stair were absorbed and misshapen or destroyed entirely as the oozes slipped by.

With a torch clasped on in one hand and dagger in the other, Gren launched forward. It leapt over the sixth stair with elegance and clanked down with a masterful landing on the other side. It continued its ascent toward the oozes. The voices of Gren’s compatriots called out behind it. It was sure they were cheers of joy and exhilaration at its bravery, daring, and battle prowess despite the angry, harsh tone. It knew its battle plan was perfectly designed.

With a quick downward cut followed by a variety of thrusts and stabs its dagger sailed through the air. The weight of the blade caused Gren to twirl in a half circle and its balance wavered. It managed to compensate and use the momentum of the dagger to right itself with another cut. It was well aware of how elegant it looked.

Gren plunged its dagger into an ooze that had reached the eleventh stair. Despite the ooze’s viscous appearance leaning more toward a liquid, the dagger had found purchase within its pulsing center. Gren’s expertly executed attack upon the enemy had succeeded flawlessly.

A second ooze dripped down the stairs at a steady, silent pace as Gren felt the first go inert. Something bubbled within the creature and Gren braced itself for a volley of attacks to valiantly defend against. Before that, a flaming sword cleaved the foe in two in a single, swift slice.

Gren glanced up and the Winged One towered over it with a stalwart, stoic expression.

He pointed at something his sword had cut through in addition to the ooze: a tripwire that Gren had walked directly under. Gren’s gaze followed the line to a pulley system. It looked to launch rusted spears that were hidden in a slit in the wall, barely visible in the torchlight.

“Gren has a height that gives it the advantage for skillful destruction of enemies. It is good that the cunning Winged One also noticed the traps, after Gren! This mission shall be an easy success!” Gren called out.

It watched as Hifos dispatched a third ooze and a second tripwire with his own sword and the same technique as the Winged One. More slimy black forms slipped down the stairs toward the group. The glory of the Grenadin and Gren’s own greatness as the greatest Grenadin warrior would be bolstered with this mission. There could be no doubt.