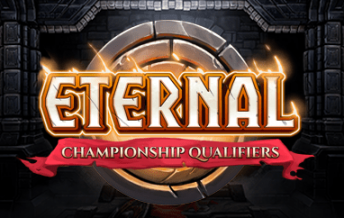 PRIZING UPDATE 11/29: As ECQ: Defiance is a single run of 28 games, previously announced run prizes have been folded into expanded leaderboard prizes. All players who participate in ECQ: Defiance will receive a minimum of 30 packs and one premium copy of Svetya, Orene of Kosul!

The first Eternal Championship Qualifier will be held November 30 – December 2!

ECQ: Defiance will feature Eternal players from around the world in a battle for a $5,000 prize pool! The last two players standing will punch their tickets to Worlds as the first players to qualify for the $100,000 World Championship!

In addition to in-game prizes, players who finish in the Top 8 will receive cash prizes, and everyone who makes the cut to the Top 64 will earn ECQ Points to help them qualify for the last-chance to get to Worlds: The Showdown! 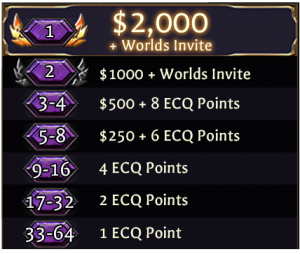 ECQ: Defiance consists of two stages: Qualifiers that are open to all players on Steam, iOS or Android, and the Finals that will feature the Top 64 players from the Qualifiers.

Note: A new Code of Conduct is in effect for all Eternal events.

Participating in ECQ: Defiance requires a registered and validated account and email address. This can be done through the Options menu in-game; we strongly encourage players to register and validate their email addresses in advance of attempting to enter the tournament. 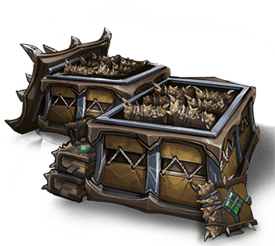 Grab your favorite deck and get ready to take a shot at qualifying for the Eternal World Championship in the first ever ECQ: Defiance!