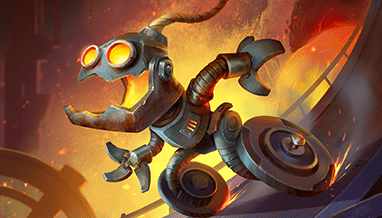 Last week we showed off the Merchants making their debut in The Fall of Argenport. They revolutionize deckbuilding, and the options afforded to players. They are flexible and powerful and tricky and fancy. There’s quite a lot to like.

But I’m much fonder of the simpler things—like attacking. Especially multiple times in the same turn. Which is why I’m here to show you Berserk.

Before we delve in, I’d like to explain the rules. There’s a bit here, but it’s simple and intuitive in practice. 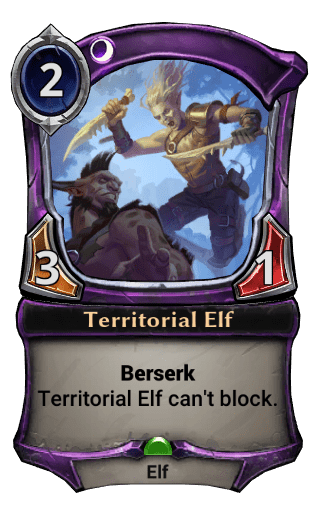 This one is pretty straightforward—a unit with aggressive stats. If you go first and play Territorial Elf on the second turn, you have a very good shot of hitting for six on the third turn. And Shadow has no shortage of removal to keep clearing the path if you’re worried about Territorial Elf gaining Reckless. That’s what you get for no work—don’t get me started on the combos with cards like Rapid Shot and Stonescar Sneak. 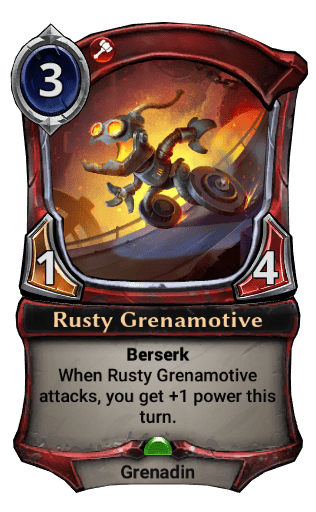 Another addition to the Grenadin legacy of temporary power bumps, Rusty Grenamotive shows off the opposite end of Berserk. This Grenadin isn’t about brawling but has a substantial amount of health for its cost, meaning it can freely attack into many enemy units. Use this unit for a steady stream of extra power, or set up some gigantic early turns along with Combustion Cell to play cards like Gearcruncher or Kaleb, Uncrowned Prince way ahead of schedule. 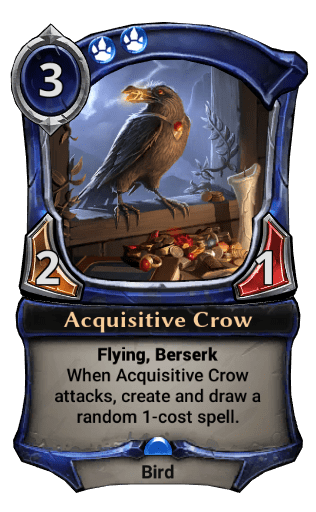 Lastly, the Acquisitive Crow. Who doesn’t like extra cards? Plenty of our 1-cost spells help you win in combat, like Finest Hour, Pummel, Torch, and Detain, ensuring that the Crow keeps on getting in. And since the Crow has Flying, it comes with a natural defense against its own Recklessness. Even if the Crow doesn’t survive through its first combat you can still come away with two spells for your trouble, and with a little work (or the right hits off the Crow) you can gain a considerable advantage.

I’m a big fan of mechanics like Berserk that let you “lean in” as much as you want. The cards shown above work just fine if you plug them into a deck with no synergies—pick your spot to attack twice, and you’re done. But with a little bit of work and timing, they can be much more powerful than advertised.